Town which describes itself as the 'Gateway to the Northern Territory'.

Driving from Mount Isa across the deserted lands of western Queensland the traveller reaches the tiny town of Camooweal to be greeted by a sign which proudly declares: 'Gateway to the Northern Territory' and adds 'Population 310'. The population has increased, at least by the signage, by 10 people in the last 30 years although the 2011 census pointed out that the town had a population of 187. It also happens to be the most westerly town in Queensland as the Northern Territory border is only 14 km to the west. It is essence of basic rural town: a general store (the famous Freckleton's General Storekeepers) and a supermarket; two petrol stations and a pub all located on the Georgina River. A service town for the surrounding properties ... and now for tourists.
The road from Mount Isa was built during World War II with American funds as a link between the southern states and the theoretical 'front line' in the Northern Territory. It was built in such haste - ie just bitumen over the flat countryside - that it became known as Tojo's Revenge - a reference to the Japanese military leader who had forced its building.

No one is sure of the origin of the name although a popular, and probably apocryphal, story is that it is a combination of 'camel' and 'Weale'. The explanation is that a man named G T Weale was the first person to bring camels into the area.

Freckleton's Store
The town's past is recalled in Freckleton's Store (c.1900) and the even older (1891) building which stands next to it. Freckleton's has changed little over the last century. Sadly in 2009 it closed after operating for over 100 years. It is recorded in the Queensland Heritage Register (see https://environment.ehp.qld.gov.au/heritage-register/detail/?id=600739 for comprehensive details) which points out that its significance lies in the fact that it is "important in demonstrating the pattern of Queensland's history, in particular the pattern of inland development in north-west Queensland, and the role of Burketown as a supply centre for north-west Queensland." and "important in demonstrating the principal characteristics of early corrugated iron outback store buildings."
The history of the building dates the purchase of the land from 1888 and the establishment of the store from 1895. The Register notes: "In 1943 the business, including associated buildings, was sold to Joseph Freckleton a tank sinker and teamster originally from South Australia. By the 1940s the business had acquired the Shell and Qantas agencies and Freckleton was able to take advantage of wartime demand for aviation gasoline and other services during Camooweal's period as a military movements and supply centre.
By the late 1940s, in addition to the general store and gallon licence, the Freckleton family owned a number of buildings, including another store, in Camooweal. Around 1950 this store was moved onto the stores allotment and re-erected adjacent to the eastern side of the gallon licence, becoming the third building on the allotment. This former store was operated as a cafe and milkbar until the early 1980s.
Concrete footpaths and street gutters were laid by Freckleton during the early 1950s. Concrete retaining walls were erected around the early flagstone footpath outside the general store at this time. During the early 1950s Freckleton was involved in the purchase, dismantling and re-sale of ex army building materials and erected timber storage racks between the general store and gallon licence. Also during this period he erected a large iron shed at the rear of the allotment for bulk storage of liquor produce and fuel.
Freckleton died in 1964 and control of the stores passed to two of his children, Joseph Freckleton and Lillian Ada Miller." It as Mrs Miller, at the age of 82, who finally relinquished the ownership of this famous shop. Read her story at http://www.abc.net.au/local/stories/2009/04/22/2550060.htm.

Drover's Camp Shed
The Drovers Camp is located on the Barkly Highway 1 km east of Camooweal. In a simple shed the droving era and the contribution of drovers to the development of the nation’s cattle industry are recorded in a gallery which houses photos, maps, artwork and memorabilia.
The Drovers Camp Association was formed in 1997. The Camooweal Drovers Camp facility is wheelchair and RV friendly operation and is open 7 days a week from 9.00 am – 3.00 pm from 1st May to 30th September with tours at 9.30 am, 11.30 am & 1.30 pm. The volunteers can provide information about Camooweal and western Queensland. Check out the website at http://www.droverscamp.com.au or tel: (02) 4748 2022.

Camooweal Caves National Park
Located 15 km south of Camooweal (turn at the Post Office Hotel) is the park turnoff - the Nowranie Waterhole is another 6 km and the Nowranie Caves Car Park is 8 km.
The website explains: "The caves and sinkholes formed when water percolated through 500 million year-old layers of soluble dolomite creating caverns linked by vertical shafts up to 75 m deep. Visitors should be extremely cautious around the edge of the sinkholes. Public entry inside the caves is not allowed. A safe viewing area is located at Great Nowranie cave ...A 1970s aerial study of the tableland revealed 80 definite and 67 possible sinkholes with the largest concentration found in the Camooweal area. These sinkholes are only surface signs of the elaborate cave systems underneath."
The sign at the Nowranie Caves explains the Aboriginal origins of the site: "The powerful Wiliyan-ngurru Dreaming is still observed with great respect by the Indjalandji-Dhidhanu People. In the Dreamtime Wiliyan-ngurru, a giant ridge-tailed monitor, created all the Camooweal caves and their chambers when he burrowed underground to make his home. He then bred many little ridge-tailed monitors that became smaller and smaller over time. The monitors that live here are his descendants. Nowranie Cave is where the Wiliyan-ngurru spirit now rests. The stippled rocks on the  top of the sinkhole represent his skin."
There are two short walks: Little Nowranie Cave walking track - 70 metres return to the cave entrance. There is no access to the cave.
Great Nowranie Cave walking track - 220 m return - takes about 30 minutes and offers views of the sinkhole from the eastern end.
There is very comprehensive information on the Department of National Parks, Sport and Racing website, check out https://www.npsr.qld.gov.au/parks/camooweal-caves/about.html, tel: (07) 4749 1555.

* Prior to the arrival of Europeans the area around Camooweal had been home to the Indjalandji-Dhidhanu Aboriginal people for tens of thousands of years.

* In 1861 the explorer William Landsborough was the first European to pass through the Camooweal area. He was looking for Burke and Wills.

* By 1870 Landsborough's reports led to the area being settled by pastoralists.

* In 1884 that the town of Camooweal was gazetted.

* It operated as a Customs Post between Queensland and South Australia (which controlled the Northern Territory) until Federation.

* By 1892 the town had a police station, a court house, two hotels and a school.

* The Barkly Tableland Shire, which included Camooweal, was formed in 1914.

* During World War II the road from Cloncurry to Camooweal was sealed at the expense of the Americans.

* In 1943 Joseph Freckleton took over the General Store. He earned a good living selling goods to the military forces who moved through the town.

* During the 1950s the path outside Freckleston's Store was paved.

* Today the town is a stopover point on the Barkly Highway between Mt Isa and the Stuart Highway. 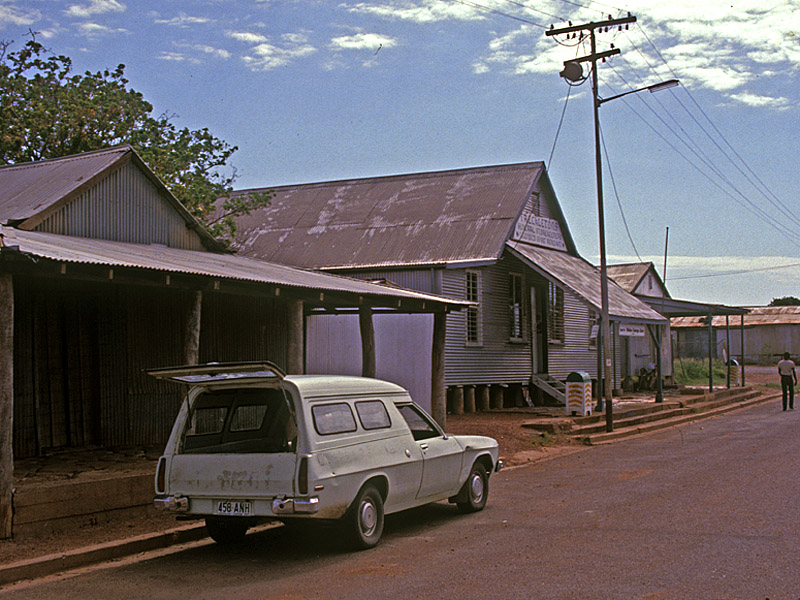 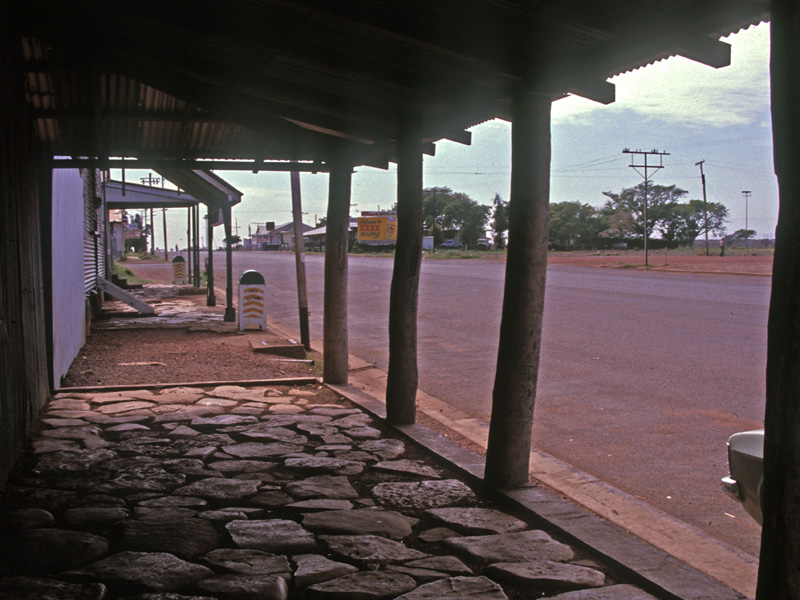 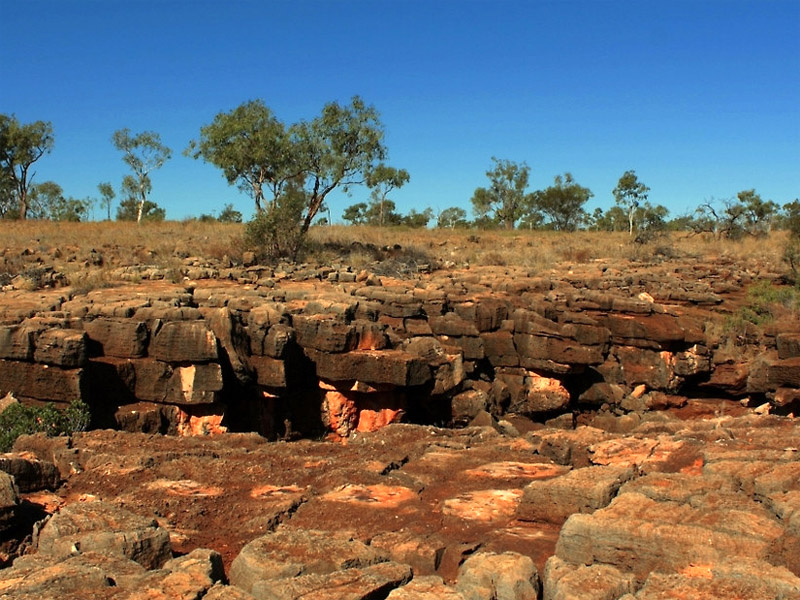 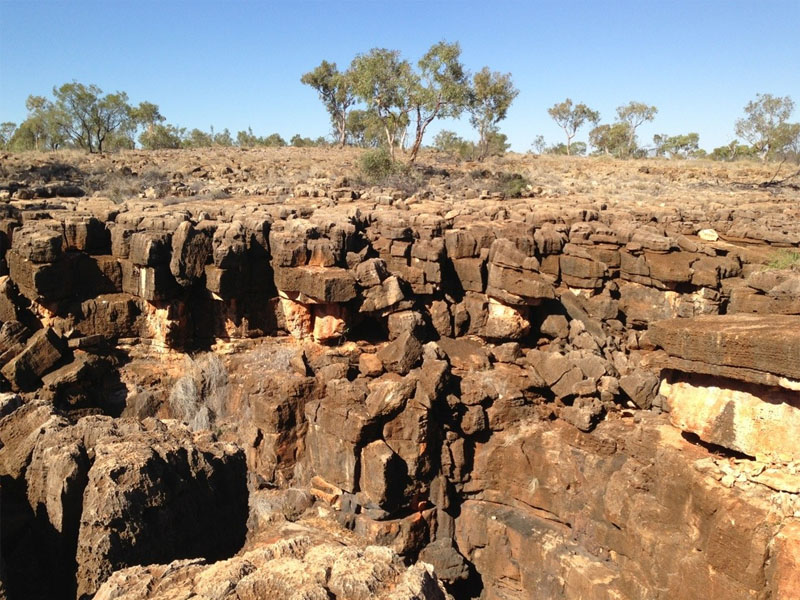