Southern Tablelands rural service centre known for the 'cleanest air in the state'.

Crookwell is a quiet rural service centre surrounded by a rich agricultural and pastoral district. It is located at the confluence of the Crookwell River and Kiamma Creek and, at an elevation of 914 metres, can be cold in winter and hot and dry in summer. The district is recognised as one of the state's major producers of seed potatoes, wool, fat lambs, beef cattle, oats, hay, dairy produce and cold-climate fruits. There is also horse studs, alpaca farms and olive groves in the area. Tourism is now the third most important industry in the district.

Crookwell is 914 metres above sea level. It is located 238 km south-west of Sydney via Goulburn.

Crookwell takes its name from the Crookwell River which was probably named Crookhall after the family home of William Stephenson, an early settler who came from England. There is no definitive evidence for the naming of the river.

Crookwell Historical Walks
There is an excellent 30 page brochure - Crookwell Historical Walks by Monica Croke - which is available at the local Visitor Information Centre. It is one of the most comprehensive guides available for any town in Australia with a total of five walks around the town (complete with maps and directions) and detailed information about the places of interest.

Here is a summary:

Walk 1 - Brooklands Walk
This is a 2 km walk which starts at Kiamma Creek on the road heading to Binda and includes  (these are the highlights)
1. the Crookwell River after which the town is named
2. Ravenscroft - a private home with an accompanying Blacksmith's Shop which dates from 1836 and provided a vital service to travellers
4. Roberts Inn - it was built in 1867 by Horatio Roberts and all that is left is a room which served as the local Post Office
5. Balcony Rose - a glorious old home which was named because the roses used to hang from its upstairs balcony
6. Brooklands House - a private home where the stables are some of the earliest buildings in the area and
10. Doonkuna Orchard - where it is possible to purchase fresh fruit from the shed door between February and September from 8.30 am - 6.00 pm.

Walk 2 - Church and Hospital Walk
This 2.1 km walk starts at the Uniting Church in Goulburn Street - these are the highlights
1. Uniting Church - originally the Wesleyan Church, opened in 1866, which was the Primitive Methodist Church from 1871-1901.
2. St Bartholomew's Church of England - there have been three churches on this site - the first dated to 1866, the second to 1904 and the third, the current one, was consecrated in 2007.
3. Temperance Hall - originally opened in 1880 and now part of the Library building which includes the local art gallery and Historical Society's archives.
4. Crookwell Public School - the original building was opened in 1874
5. Masonic Temple - built in 1908
7. St Andrew's Presbyterian Church - opened in 1882
8. St Mary's Catholic Church - opened in 1891, destroyed by fire 1958 and subsequently rebuilt.
9. St Mary's Presbytery - built in 1877 and expanded in 1918.

Walk 4 - Kiamma Creek, Pat Cullin Reserve, Memorial Park Reserve
This 2.4 km walk starts at Kiamma Creek and includes
2. Pat Cullin Reserve
3. Crookwell Railway Station - dating from 1901 when the first train arrived
4. Memorial Park - with its 2003 Memorial Shrine and its Memorial Gates dating from 1925.
7. Montrose - now a private residence but once the town's Maternity Hospital
11. Stephenson's Mill - a steam powered flour mill which was opened in 1871 and operated as a mill until around 1900.

Walk 5 - The Cemetery Walk
This 4.5 km walk starts at Memorial Park in Spring Street and includes
4. Cemetery - which has been used since 1881 and contains most of the town's pioneers
10. Kiamma Park

Lindner Sock Factory
Located at 6 Goulburn Street, the Lindner Sock Factory started in the Southern Tablelands in 1987 when a factory was built in Goulburn. Already the company were famous German sock (or hosiery) manufacturers having started in 1921 as H. Max Lindner Fabrik in Thalheim. The family fled Germany after World War II, stayed in the US for a few years, and then migrated back to Germany where they became so successful they made the socks for the 1974 West German soccer team and were making socks under contract for Adidas. In 1986, fearful of the fallout from Chernobyl, they split the company and Wilfred Lindner moved to Australia. He established Lindner Quality Socks Pty Ltd in Goulburn and in 1997 moved to Crookwell. As they proudly declare: "Many of the locals now proudly wear their Lindner Socks, and over the years the shop and factory have become one of the town’s attractions for tourists and visitors, some of whom specifically travel to Crookwell to stock up on socks." For more information check out https://www.lindnersocks.com.au. Visit the shop, buy some socks and see how socks are made.

Crookwell Wind Farm
Located on the road between Goulburn and Crookwell is one of the country's earliest wind farms. It dates from 1998 and consequently the signage is amusingly antique: "As a renewable source of energy, wind power enables electricity to be generated without any carbon dioxide emissions. Each year the Crookwell wind farm will save around 8,000 tonnes of carbon dioxide emissions, that would otherwise have been produced from coal fired generation. At full output the wind farm will be capable of meeting the average electricity demand of 3,500 homes. The wind farm was constructed and commenced operating in 1998, following long term wind monitoring at the site. The energy generated is fed into Country Energy's transmission grid for distribution to customers. The wind farm is connected via underground 11kV cables to a substation, which steps up the voltage for connection to the local 66 kV transmission grid. Eraring Energy acknowledges the contribution to a sustainable energy future made by the property owners, the Seaman family, Australia's first wind farmers.
Vital statistics of the 5MW wind farm
8 turbines - 600 kW capacity - 45 metre hub height - 28 rpm rotational speed - 44 metre blade diameter - 15 km per hour starting wind speed - 54 km per hour maximum speed - 72 km per hour cut out wind speed."

Markdale Homestead
Located 28 km northwest of Crookwell, this glorious country house was built by the Ashton family in the 1920s after the four Ashton boys, having shown the English how to play polo, managed to do a roaring trade in polo pony exports.
The wealth was later compounded and the family, with a fine sense of taste and prescience, employed the services of that horticultural guru, Edna Walling, to give them a garden to die for. In 1950 Leslie Wilkinson, the first Professor of Architecture at Sydney University, was employed to remodel the house, a task he achieved with such flair that the current building includes a delightful folly and a wind vane driven by the models of two polo ponies. The original two stone cottages, built in the late 1800’s, were completely renovated in 1998 and turned into two self contained guest houses, with two and four bedrooms respectively. In 2005 the six bedroom shearers’ quarters was also renovated doubling the accommodation available. The Ashtons sold the property in 2017. The new owners already have a website - http://www.markdale.com and it is possible to book through farmstay@markdalestation.com.

Laggan and Willowvale Mill
Laggan, named by Governor Macquarie, lies 9 km north-east of Crookwell. It is surrounded by rolling hills given over to farming and grazing. The old Willowvale Mill, built in the 1850s, closed in 1904, restored in the 1970s and opened as Willowvale Mill restaurant (tel: (02) 4837 3319) is now a guesthouse and restaurant which is highly rated as the best restaurant in the district. Check out http://visitupperlachlan.com.au/page88.html.
Laggan has a fascinating history involving bushrangers. In 1862 Daniel O'Brien's Shamrock Inn was held up by Charles Foley and John Brownlow. They tied up Mrs O'Brien and put a bag over Daniel's head. Both were known in the district and were subsequently captured and sentenced to seven years gaol.
On December 28, 1863, the Tuena mailman was bailed up at Laggan and robbed of gold. James Monks was arrested but acquitted of the charges. Just four months previous horse thief John Cummins was shot dead by sniper fire just to the north of Laggan, while under police escort. It is thought his brother fired the shot in an attempted rescue effort.
Then, 23 days later, Senior Sergeant James Stephenson stopped by the Limerick Races Inn at Cooksvale Creek, north of Laggan. Bushrangers Fred Lowry and Larry Cummins were occupying a room at the inn. Stephenson broke down the door to their room. He was wounded, Lowry was shot in the neck and Cummins surrendered. Lowry died en route to Goulburn.
If you are heading north of Laggan there is a fine lookout over the Fullerton Valley, about 12 km north on the Peelwood Road, just before the Fullerton turnoff.

* Prior to white settlement the area was inhabited by the Wiradjuri Aborigines.

* The first Europeans known to be in the area were the exploratory party of surveyor James Meehan which camped 1 km south of present-day Grabben Gullen (10 km south-west of Crookwell) in April, 1820.

* John Oxley passed to the north and east later that same year.

* By 1828 settlers were in the district and the Crookwell River had been named.

* Some wheat and potatoes were grown from 1840 and a couple of inns emerged in the district at road junctions.

* Binda, 19 km north, was initially the centre of the district.

* Crookwell, originally known as 'Kiamma', was surveyed in August, 1860 and renamed after the river.

* The Royal Hotel and Millhouse Inn were built in 1862.

* The Anglican Church was consecrated in 1866.

* The first post office opened in the general store in 1867.

* The first passenger coach was introduced in 1875 to hasten access to Goulburn. That year also saw the opening of the Bank of New South Wales.

* By 1878 there were two hotels, a bank, a tannery, a cordial factory, a flour mill, saddlery, blacksmith's, butcher and five stores. That year saw the completion of the Court House and Police Station.

* The Crookwell Hotel was constructed in 1884.

* Oats and wheat declined in the 1890s but sheep and dairy cattle became important.

* A butter factory was built at Crookwell in 1890.

* The first branch of the CWA (Country Women's Association) was formed in the town in 1922.

* 1941 saw the successful mining of iron ore in the district.

* The town was connected to electricity in 1947.

* In 1950 the council removed all veranda posts in the main street.

* The first grid-connected wind farm in Australia, capable of supplying electricity to 3,500 homes, was opened at Crookwell in 1998. 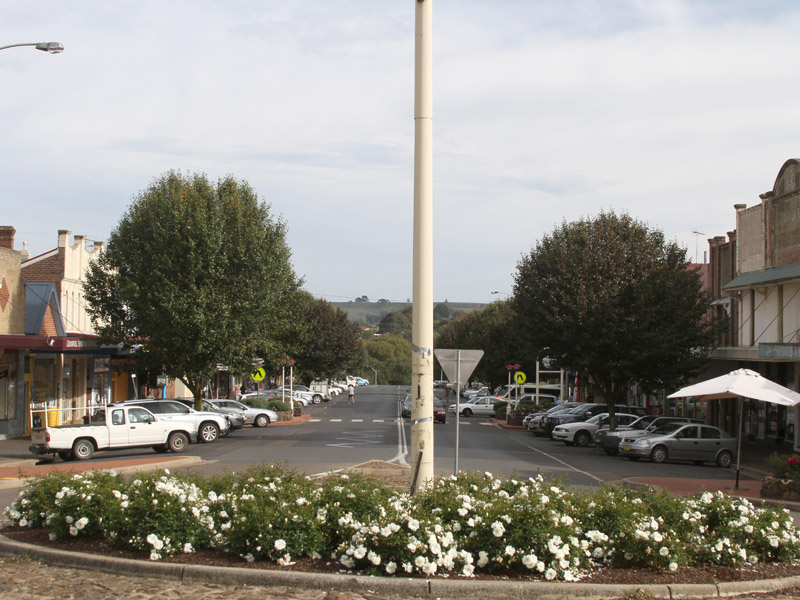 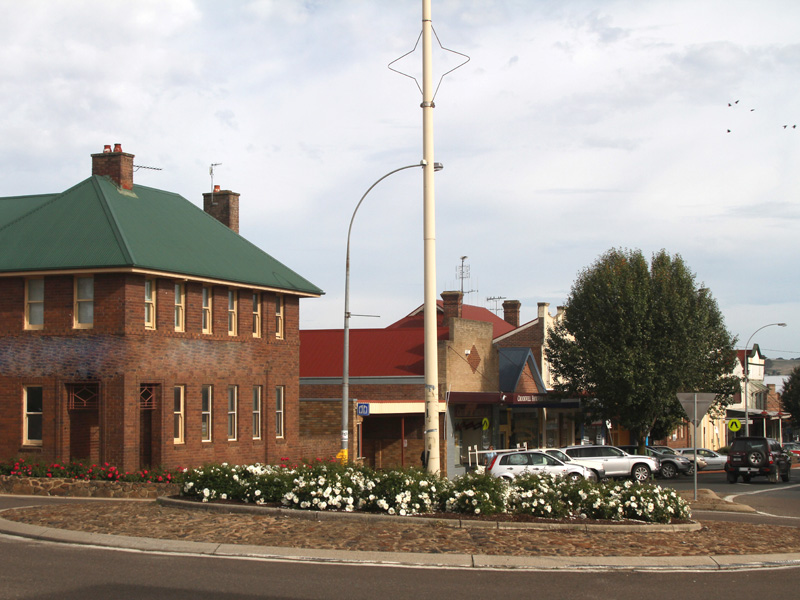 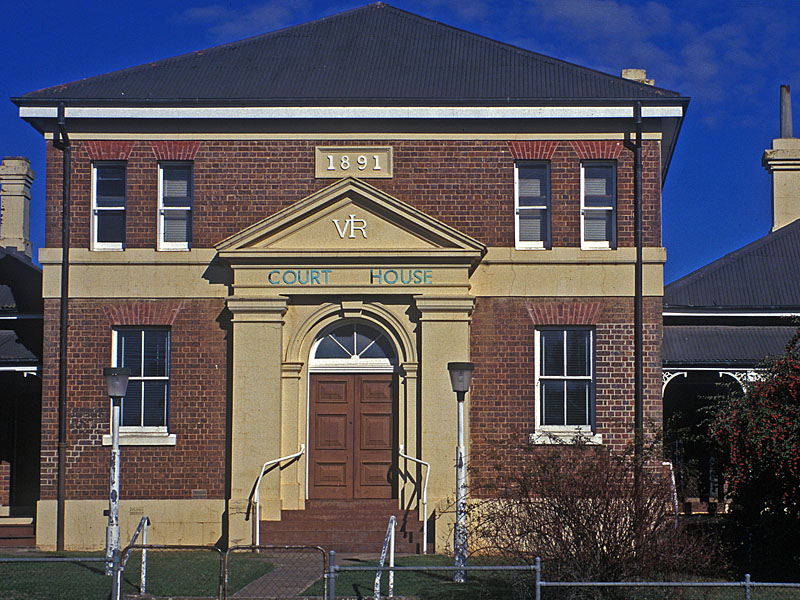 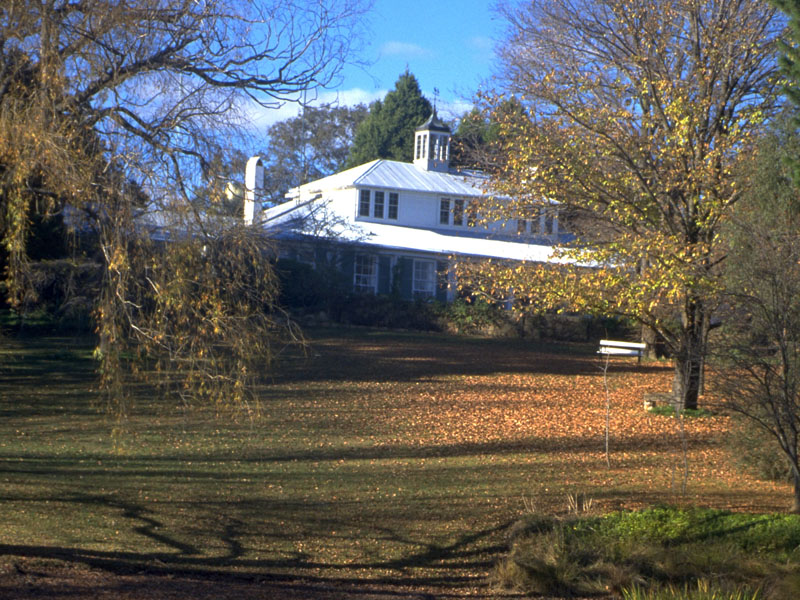 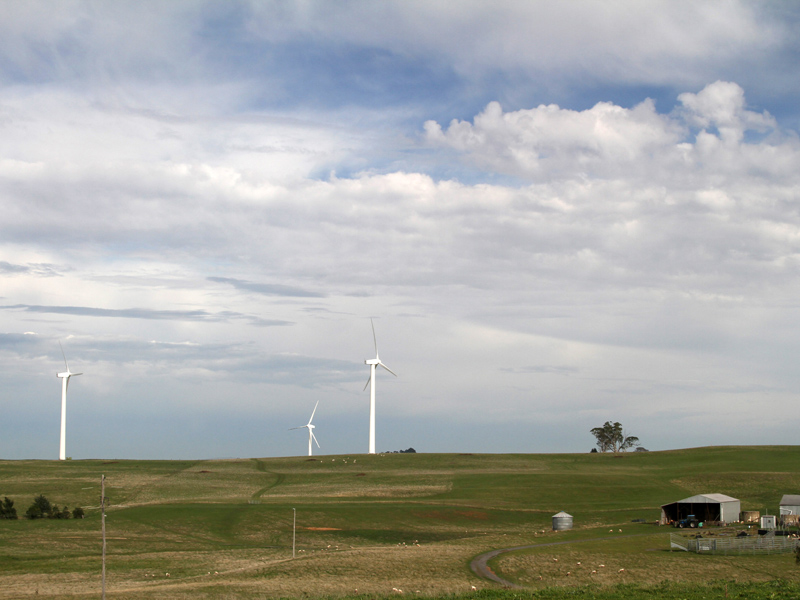