Metung is a quiet holiday town which lies on a section of land between Bancroft Bay and Lake King. It is charming and upmarket attracting people eager to fish and boat on the lakes and offering relaxation and a holiday ambience as its primary appeals.

Metung is located 312 km east of Melbourne via the Princes Highway. It is 31 km east of Bairnsdale on the shore of Lake King.

Metung is named after a Tatungooloong Aboriginal word which probably meant either "mainland" or "ti-tree river bend".

Shaving Point
The plaque on Shaving Point points out that it was "the first subdivision of Metung occurred at Shaving Point which was so named because the depth of the water allowed steamers and other vessels to pass close to the land - to show the point.  Wording on a later nineteenth century map states: 'Metung Process Association. Permission to erect a fence. No objection to erection of a machine gun.' The point was a favourite vantage site for the regattas which were an attraction of Metung for many years. The first Post Office was established there in 1879. Early in the twentieth century, cattle and horses were swum across to Mosquito Point and Boole Poole; sheep were carried across on large work boats; children used to come across to school in row boats as recently as the 1930s."

A Walk along the Boardwalk
There is a pleasant boardwalk that runs around the shore of Bancroft Bay to the Village Green. It is a leisurely walk beside the water.

The "Charles Edward" Silhouette
Located on the shore line north of Shaving Point is the silhouette of the Charles Edward, an iron hulled paddle steamer built in Dumbarton, Scotland in 1864. The placard explains that the "129 foot 185 ton ship, with a 60 hp motor, was built for the Gippsland Steam Navigation Company, later to be named The Gippsland Lakes Navigation Company. Having suitable accommodation in the saloon for passengers, she became the first regular steam ship between Melbourne and the Gippsland Lakes. Captain Darby took charge in 1865 and was advertised leaving Queen's Wharf, Melbourne on Mondays at 8 pm for Sale, Bairnsdale and Stratford via Port Albert. Passengers were informed that Bairnsdale was within one day's travel of the great gold fields of North Gippsland. The same year two of the crew men lost their lives from a small boat while trying to navigate a safe channel for the Charles Edward through the natural entrance near Lakes Entrance. Surviving several near wrecks on the Victorian coast, the Charles Edward was sold to New Zealand in 1876."

Gippsland Lakes - Geology and Bird Watching
The Gippsland Lakes are a collection of coastal lagoons which were formed when the ocean's sand deposits created lengthy, narrow sand spits, low-lying sand islands and dunes which eventually formed a barrier which separated Bass Strait from the calmer waters. The rivers which flow into the lakes deposited silt and clay which formed a series of lakes and swamps. An artificial entrance was created in 1889 to allow permanent navigable entry. This new mouth lowered and stabilised water levels in the lakes which are fed by a number of river systems - the Latrobe and the Avon (which flow into Lake Wellington), and the Mitchell, Nicholson and Tambo (which flow into Lake King).

Taken together they constitute the largest navigable inland waterway in Australia. The major bodies of water - Lake Wellington, Lake Victoria and Lake King - have 320 km of shoreline and cover a total of 340 square kilometres.

The Gippsland Lakes possess features of international significance. The Mitchell River delta, for example, is an eroded digitate delta which extends southwards from Bairnsdale along the western shore of Lake King to Eagle Point. From this point it forms a series of long, narrow, winding jetties of silted sediment which extend eastwards out into Lake King for 8 km.

Also of geomorphological interest are the Tambo River delta which extends 2.5 km south-west into Lake King; the Latrobe delta, protruding over 2 km into Lake Wellington, which is formed by silt trapped by a reed swamp; McLennans Isthmus (a long, broad sandy promontory that separates Lake Victoria and Lake Wellington) and McLennans Strait (a deep narrow channel that connects these two lakes).

The lake's ecosystem is an important habitat for ducks, swans, coots and other waterbirds. Lakes Wellington, Victoria and King are permanent deep saline wetlands supporting populations of migratory seabirds, including the little and fairy terns. Lake Reeve is an extensive intermittent saline wetland of international significance which provides a highly significant habitat for up to 12,000 migratory wading birds, making it one of the five most important areas for waders in Victoria. Other noted bird populations exist at MacLeod Morass, Sale Common, Clydebank Morass, Dowd Morass, Jones Bay and Lake Bunga. The latter is a relatively small coastal wetland that is fresh to brackish, supporting waterfowl, little tern, hooded plover and the white-bellied sea-eagle. Other good bird watching sites to the north are Blond Bay State Game Reserve, located behind Lake Victoria, and Colquhoun Forest. Vegetation around the lakes includes swamp paperbark, reed and salt-marsh vegetation such as glasswort, shore rush, saw sedge and salt grass.

The Bataluk Cultural Trail - Legend Rock
The Bataluk Cultural Trail runs from Sale in the east through Bairnsdale, Metung, Lake Tyers, Buchan and Orbost to Cape Conran in the west. It follows the trails and trading routes of the local Aborigines and focuses on elements of Kurnai history and culture, including Dreamtime stories, traditional lifestyles, the Den of Nargun, Legend Rock, Aboriginal Keeping Places, archaeological sites such as canoe trees and shell middens, cultural centres of the region, and aspects of European invasion, colonial settlement and present-day existence.

At Metung the focus is on Legend Rock. To reach it turn off the Princes Highway at Swan Reach and follow the Tambo River. It is well signposted. The Bataluk Cultural Trail website (http://www.batalukculturaltrail.com.au/legend_rock.php) explains: "The Legend Rock, an important part of Kurnai mythology, lies in shallow water by the shore of Bancroft Bay, opposite the Metung Yacht Club in Tatungooloong Country.

"One day, some fisherman who had hauled in many fish with their nets, ate their catch around their campfire. The women, guardians of the social law, saw that the men had eaten more than enough but had not fed their dogs. As a punishment for their greed the fishermen were turned to stone." This story is one of many Kurnai stories that were told and retold to show that greed would bring punishment. The Legend Rocks hold great spiritual value to the Kurnai people and the story serves as a great legend for its people to remember the laws of the land.

There were originally three rocks in the formation at Metung, unfortunately two were destroyed during road construction along the shore of Bancroft Bay in the 1960s.  The last rock was preserved when community members and Gippsland & East Gippsland Aboriginal Cooperative had an injuction issued. The Legend Rock continues to be protected under the Heritage Act of Victoria.

Literary Connections
For the first half of the twentieth century, Metung was a popular holiday destination for Gippsland's gentry - a fact which was recorded, with suitable impressiveness, by a number of books which mentioned the township.

In Across the Alps to Omeo (undated but it does have advertisements for hotel accommodation for one shilling a night) the anonymous author writes about Metung as "one of the prettiest places on the Lakes. This charming retreat is situated on the shores of Bancroft's Bay, and is awarded by competent judges of the picturesque the palm for beauty of scenery. This place is the gem of lakeland. Visitors will find everything up to date at the Scarborough Hotel, a few yard from the pier, the warrant of which will be that Mr. Glover has had a great deal of continental experience and knows how things should be done."

The 'upper class' regatta day was described by Dorothy Blewett in her novel Vision (1931) as: "Dozens of small craft, fishermen's boats, motor launches, all decked with flags - the great boats from Sale and Bairnsdale, brimful of laughing people".

The writer Mary Grant Bruce's visits to the area form part of her novel Possum (1917). In the 1950s she revisited the sites depicted in her novels with Hal Porter who made the following remarks: "Out of season, it's a fishing, boat-building, yachting Sleepy Hollow, with a number of closed-up holiday cottages."

* Prior to the arrival of Europeans the area was home to the Kurnai people. The Krauatungalung group had two divisions - the Wurnungatti lived around Lake Tyers and the Brt-Hrita around Jemmy Point.

* The Scottish explorer, Angus McMillan, was the first European to reached the Gippsland Lakes  in 1840.

* John Reeves explored the lakes in 1843 and settlers arrived and cattle runs were established soon after.

* In 1858 the Georgina Smith became the first large vessel to enter the lakes from the ocean, passing Metung and sailing up the Tambo River with supplies for the Crooked River goldfields.

* From the 1860s Lakes Entrance was important as a port for the trade of East Gippsland.

* By 1864 vessels were regularly using the inlet and a pilot boat, The Lady of the Lake, was used to help vessels through the narrow inlet.

* The first Post Office was established at Shaving Point in 1879.

* Bulls Shipyard was established in 1926.

* During World War II a flying boat refuelling depot was established at Metung.

* Two of the three Aboriginal "Legend" rocks were destroyed by road building in the 1960s.

There is a useful local website. Check out http://metung.com. 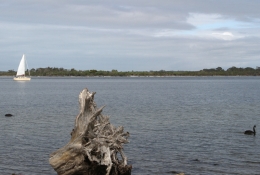 A boat and a black swan on Lake King from Metung. 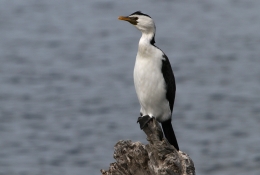 A pied cormorant on the shore of Lake King. 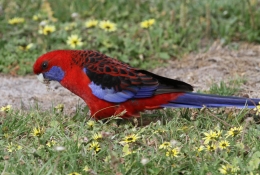 A crimson rosella on the shore of Lake Fing 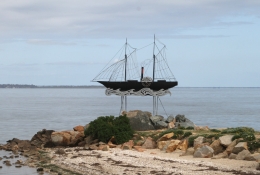 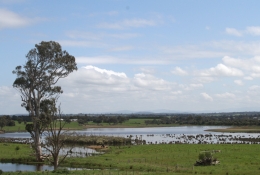 The hinterland between Bairnsdale and Metung. 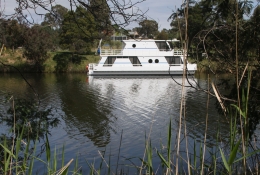 A boat on the Tambo River north of Metung.