Ashford is a tiny town which, largely as a result of changes in transportation, has been reduced to a general store, a pub, a bakery, a rural supplies store and a rural transaction centre (post office, credit union, tourist information). Many of the shops are closed and the Strand Theatre, once the centre of the village's social life, no longer operates. The appeal of the town lies in the beautiful Kwiambal National Park which lies to the north-west and has abundant wildlife, beautiful and peaceful rivers and a particularly beautiful waterfall which tumbles into a plunge pool ideal for swimming.

Ashford, a small rural town, is 373 km south from Brisbane via Warwick, 628 km from Sydney via Thunderbolt's way and 669 km north of Sydney via the New England highway. It is 430 m above sea-level.

Walking Around Town
It is no accident that the town's website - http://www.ashfordonline.com.au/TOURISM/attractions.html - does not list attractions in the town but rather concentrates on creeks, national parks, caves, water holes and rivers for fishing in the immediate area. Ashford is a town that is struggling. Modern transport has made Inverell (only 58 km to the south) easily accessible and consequently many of the shops and services have closed down. It has a general store, a pub, a bakery, a rural supplies store and a rural transaction centre (post office, credit union, tourist information). It is worthwhile walking up and down the main street and trying to understand how towns like Ashford can survive. They are important to the local people but their original economic reasons have disappeared and all that is left are services which people want on a daily basis and a lot of empty shops.

Kwiambal National Park
Kwiambal National Park is located north-west of Ashford with Lemon Tree Flat campground being 36 km north of the town. The area is managed by the NSW National Parks and Wildlife Service (see their website http://www.nationalparks.nsw.gov.au/visit-a-park/parks/kwiambal-national-park for further details) and is 3400 ha in size. The park is located around the confluence of two major river systems, the Severn River and the Macintyre River. Kwiambal National Park conserves one of the largest remaining areas of native vegetation on the North West Slopes. The vegetation is typically open woodland with White Cypress Pine and Silver Leafed Ironbark and there is 200 hectares of rare dry rain forest. It is common, particularly in the early morning and late afternoon, to see grey kangaroos, wallaroos, platypus, swamp wallabies, red necked wallabies, koalas, emus and squirrel gliders in the park. Bird species in the area include black cockatoos, turquoise parrots. blue faced honeyeaters, white-winged choughs, square tailed kites and the tawny frogmouth. The Macintyre and Severn Rivers offer spectacular waterfalls, large pools, sandy beaches, sculptured granite, valley scenery, bushwalking, excellent swimming and fishing. There is camping available at the Lemon Flat Camping Ground which has pit toilets and picnic facilities.

Limestone Caves
The Limestone Caves are located 28 km from Ashford and are readily accessible but you must bring your own torch. The area near the caves has picnic and toilet facilities. There is an excellent, downloadable guide published by the NSW National Parks and Wildlife and titled Guide to New South Wales Karst and Caves. It notes that the "Ashford Caves occur on the northern edge of a limestone outcrop, which stretches for 10 kilometres along Limestone Creek. The area’s limestone is Carboniferous in age (about 330 million years old) and was metamorphosed into marble by the heat and pressure generated when nearby volcanic and igneous rocks formed. Ashford Main Cave has approximately 560 metres of horizontal passage, with two main entrances and a number of smaller openings. However, while relatively large in size, the cave only has a limited number of intact decorations because of past mining activity and dissolution by guano and bat urine." The rare Large Bent-wing Bat (minioterus schreibersii) uses the caves as a nursery and roosting site. The Eastern Horse-shoe Bat also uses the caves. These bats are protected and consequently the caves are closed during their breeding season. Visitors enter the cave system by walking to the right of the large stalagmite, passing through the Main Cave, and keeping to the right. A low passage takes you into the Great Cave. The Opera House Cave is to the left and The Gallery to the right. For more information (and the downloadable guide) check out http://www.environment.nsw.gov.au/resources/geodiversity/110455nswkarstcaveguide.pdf.

Macintyre Falls
Located 36 km from Ashford on a road which combines dirt with sealed surfaces is the beautiful gorge where the Macintyre Falls and the pool below are the most striking features.  There are bushwalking tracks down to the river - and the falls, although small, are visually striking as they tumble from a rocky outcrop through a series of steps to the deep rock plunge pool at the base. The campsite has basic camping, toilet, barbecue and picnic facilities. There are two walking tracks: one leads to a lookout platform at the top of the falls and another winds down the cliffs to a large rock swimming pool and a freshwater beach.

Pindari Dam
Pindari Dam is located 25 km south-east of town (turn south of Martyn Street onto Pindari Dam Road) The dam, located on the Severn River was completed in 1969. It is popular with locals who use the water from boating, water skiing, swimming and fishing. There are barbecue, picnic and camping facilities, a childrens' playground, an amenities block and a boat ramp.

* Prior to the arrival of Europeans the area was occupied by the Kwiambal, a sub-group of the Kamilaroi Aboriginal people.

* In 1827 the explorer Allan Cunningham passed through the district on his way to the Darling Downs.

* By 1839 George Wyndham had settled 51,180 ha with one of the boundaries being only 5 km from where Ashford now stands.

* By 1843 a watch house was established at Ashford by the NSW Commissioner of Crown Lands.

* By 1845 John Prefrement had established the Squatters Home Inn.

* A post office was established at Frazer's Creek in 1853.

* A police station was established in the town in 1864.

* In 1865 Ashford's third hotel was opened. A lock up and court house were built.

* The local public school was opened in 1868 with an enrolment of twenty.

* 1902 saw the district devastated by drought with 20,000 sheep dying at Frazer Creek Station.

* In 1903 the Commercial Hotel, the largest building in the town, was opened for business. An expert advises local farmers on how to grow tobacco.

* In 1907 a public telephone was installed at the Post Office.

* The local Roman Catholic Church was consecrated in 1913.

* In 1924 St Marks Church of England was dedicated by the Bishop of Armidale.

* By 1936 the town the Ashford Memorial Hall was built.

There is no visitor information centre in Ashford. The closest is the Inverell Visitor Information Centre, 11-31 Campbell Street, Inverell, tel: (02) 6728 8161. The people at the Rural Transaction Centre, Albury Street, can help with any enquiries.

There is a local website with a very detailed history of the town. Check out http://www.ashfordonline.com.au. 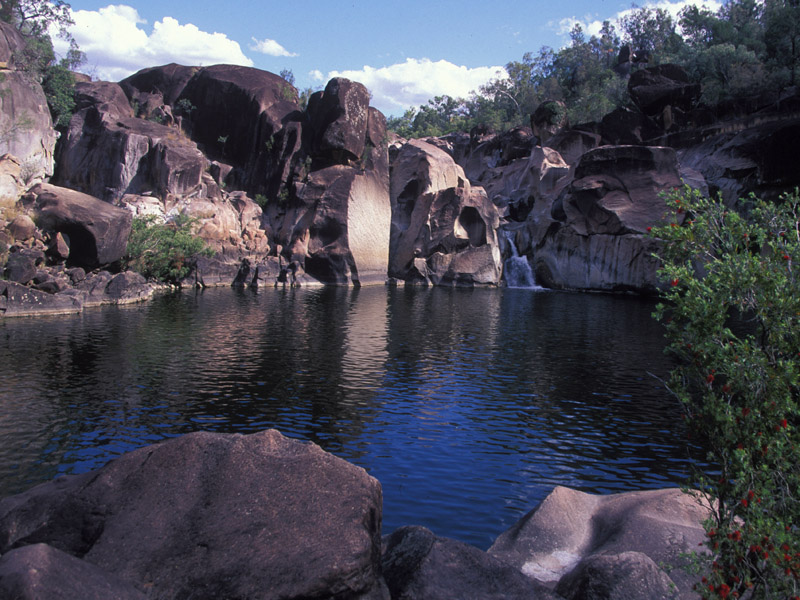 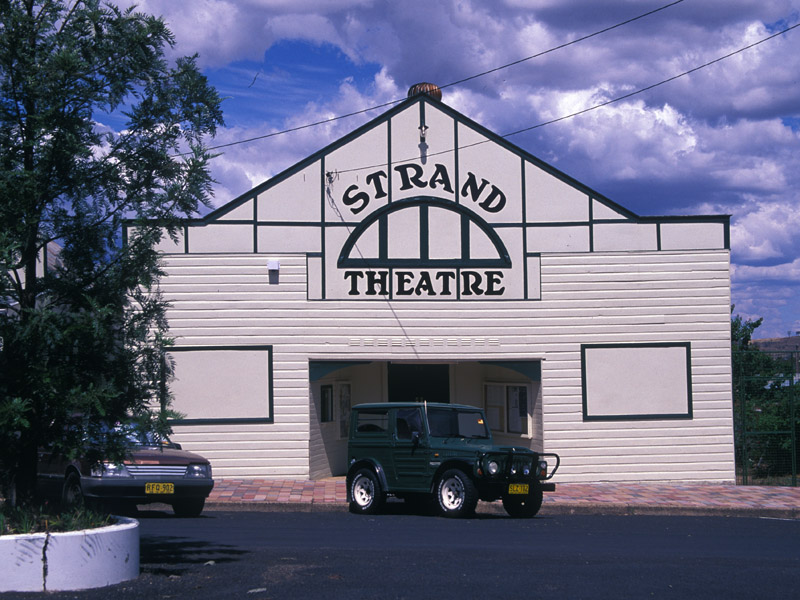 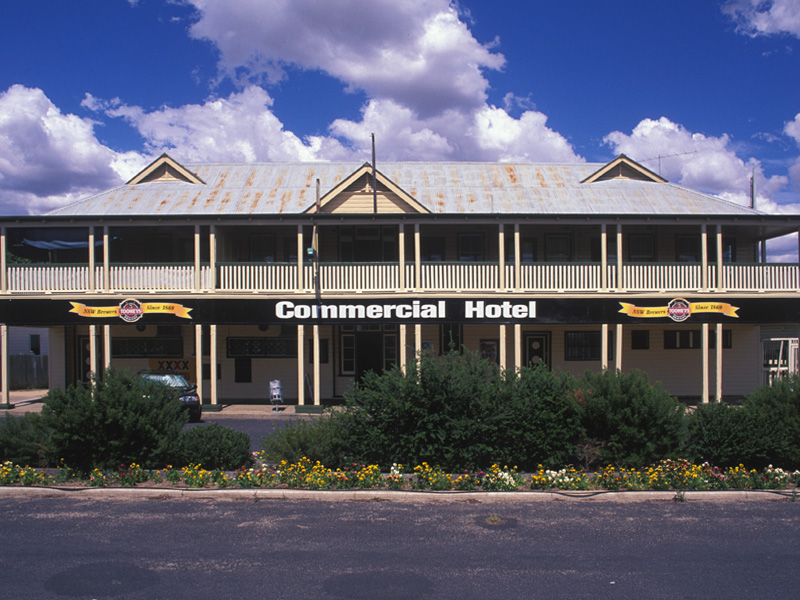