Quiet wheatbelt town known as the 'Land of the Golden Grains'

Bencubbin is a typical rural town in the north-eastern sector of Western Australia's wheatbelt. It is a simple rural service centre focussed on the surrounding grain and cereal producers. The main attractions in the area are the rocks which rise from the flat wheatfields. These rocks were vital for early water supplies and today offer panoramic views over the surrounding countryside. There is also a very unusual sheep yard made from local granite which is worth inspecting.

There is some evidence that when the local Roads Board was established in 1923, Bencubbin was named as a simple version of the local Aboriginal word 'Gnylburngobbing' which was the local word for a large rock lying to the north of the town. This is ironic as the explorer, J. S. Roe, named the nearby hill, Mount Marshall, precisely because he despised Aboriginal names believing them to be unpronounceable.

Bencubbin Hotel
It is a sad comment on the changing nature of the wheatbelt that the Bencubbin Hotel is now closed. It stands on the main street looking rather forlorn but it is worth noting that it is actually two hotels. Although one hotel is obviously nothing more than an extension of the original hotel the difference in architectural style is such that they give the impression of being two hotels standing next to each other.

Bencubbin's Murals and Sculptures
There is an impressive mural by Irene Osborne depicting traditional sandalwood cutters with drays carrying their loads of wood. There is also a large mural on a circular wall at the centre of the town's Botanical Gardens. It was painted by Philippa Gillett and depicts the agriculture of the district. There is also a farm art sculpture by Murray Cooper celebrating a centenary of agriculture in the district.

The Bencubbin Meteorite
The Western Australian Museum website (http://museum.wa.gov.au/research/collections/earth-and-planetary-sciences/meteorite-collection/bencubbin-meteorite) explains the importance of the Bencubbin meteorite as: "During the 48 year period between 1912-1960, a number of important meteorites were recovered in Western Australia, some of which were deposited at the Western Australian Museum.
"The most important of these was Bencubbin. The first mass (54.2 kg) of Bencubbin was discovered in 1930 during ploughing. A second, larger mass (64.6 kg) was found in 1959, and a third mass (15.76 kg) was found in 1974. Bencubbin has subsequently proved to be an extreme rarity and have significant scientific importance. Originally classified as a ‘stony-iron’, today it is recognised as the type specimen of a new group of carbonaceous chondrites (CB), or ‘Bencubbinites’.
"Bencubbin is a breccia (a rock formed of angular fragments cemented by a finer material) enclosing clasts of material from other chondritic groups, and the meteorite remains the subject of extensive ongoing research." It is held in the Western Australian Museum in Perth.

Pergandes Sheep Yards
Located approximately 7 km from Bencubbin on the road which heads east from Bencubbin to Mukinbudin, the Pergande Sheep Yards are the remains of sheep yards that were constructed by Ted Pergandes in 1913 from large granite slabs that were drawn into position by horse sled from the nearby Wiacubbing Hill. These slabs were then placed upright out of the ground to make the fences of the sheep yards. The site is accessible to visitors and the signage provides information from the original farm owner, Edward (Ted) Pergande. Check out http://www.australiasgoldenoutback.com/Listing/Pergandes_Sheepyards for more details.

Marshall Rock
Located 5 km from Bencubbin and near the Pergandes Sheep Yards, is Marshall Rock, an excellent place for bushwalking, bird watching and inspecting wildflowers. The panoramic view from the top of the rock includes Lake McDermott, extensive wheatfields and even the Bencubbin Wheatbins. The reserve covers 140 ha. It is a delightful place to walk and the rock's slope is so gentle that it is easy to walk up and down.

Billiburning Rock
Located 76 km from Bencoppin via Beacon and surveyed by Harry Sanford King around 1889-1890, Billiburning Rock is situated near the rabbit proof fence, now known as the vermin proof fence. The rock, which is one of the largest outcrops in the area, is known locally for its attractive wildflowers and native fauna. Birdwatchers can expect sightings of wedge-tailed eagles, budgerigars, Black Cockatoos, Purple-crowned Lorikeets, Major Mitchells and Mallee Fowl. There is a panoramic view from the top of the rock across wheatfields and the surrounding area is ideal for picnics.  To get to the rock, head north on Ingleton Road from Beacon townsite for 30 km to White Road and travel north on White Road for another 3 km to the rock entrance on your left.

Datjoin Well & Rock Reserve
Located to the east of Beacon is the Datjoin Well and Rock Reserve. The well was dug in early 1900’s by sandalwood cutters. During the winter and spring months the reserve is a popular picnic destination for visitors eager to find some of the best orchids and wildflowers in the district.

Wildflowers around Bencubbin
Western Australia in spring boasts one of the greatest floral displays on the planet. No matter what you have been told nothing can prepare you for the sheer, overwhelming scale and beauty of Western Australia's spring wildflowers.
How can it be described without collapsing into cliché and effusive hyperbole? Yes the landscape really is "a riot of colour", "a blaze of wildflower colour", characterised by "spectacular floral treasures" and "a breathtaking array of different forms and colours".
Flowers that abound in some areas simply don't exist at all in other areas. There are places where banksia bushes line the roads. Other places are characterised by vast washes of colour produced by dense outcrops of everlastings or paper flowers. Some places appear to lack any kind of floral spectacle until you realise there are small flowers on the scrubby bushes and tiny flowers colouring the grasses.
The facts are amazing. There are, it has been estimated, more than 12,000 species of flowering plants scattered across an area of 2.5 million square kilometres which stretches from the Pilbara in the north around the coast to Esperance and inland across Western Australia's wheatbelt as far as Kalgoorlie.
Ask for directions at the Bencubbin Community Resource Centre. Make sure, if the season is good, that you go for a long, leisurely walk around Marshall Rock.

* Prior to European settlement the district was inhabited by members of the Nyaki-Nyaki Aboriginal language group.

* The area was first explored by the Surveyor General J. S. Roe in October 1836 when, in his travels beyond the Avon Valley, he travelled through the area naming the granite outcrop to the south of the town Mount Marshall in honour of his friend Captain Marshall MacDermott, the first manager of the Western Australian branch of the Bank of Australasia.

* By the 1840s there were shepherds and sandalwood cutters in the area although there was no permanent settlement until the 1860s.

* The agricultural potential of the area was recognised in the 1890s but the first permanent settlement in the shire didn't occur until 1908.

* Bencubbin as a name was suggested in 1913 for the railway station at the end of the Wyalkatchem-Mt Marshall railway.

* The townsite of Bencubbin was gazetted in 1917.

* The Mount Marshall Roads Board was established in 1923. That same year saw the opening of a police station.

* The Roman Catholic Sacred Heart Church was consecrated in 1935.

The town has its own website. Check out http://www.bencubbin.com. Also useful is http://www.australiasgoldenoutback.com/travel-destinations-outback-australia/Wheatbelt_and_Wave_Rock/North_East_Wheatbelt/Bencubbin_and_Beacon. 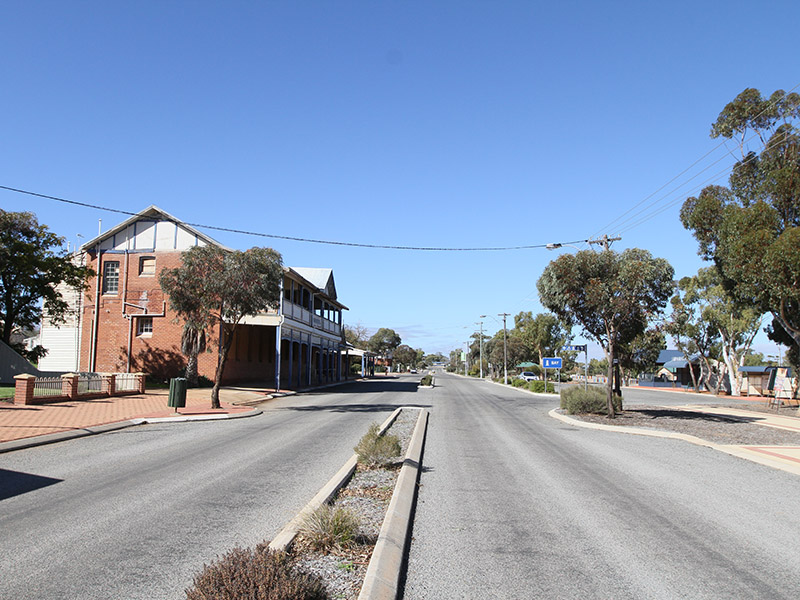 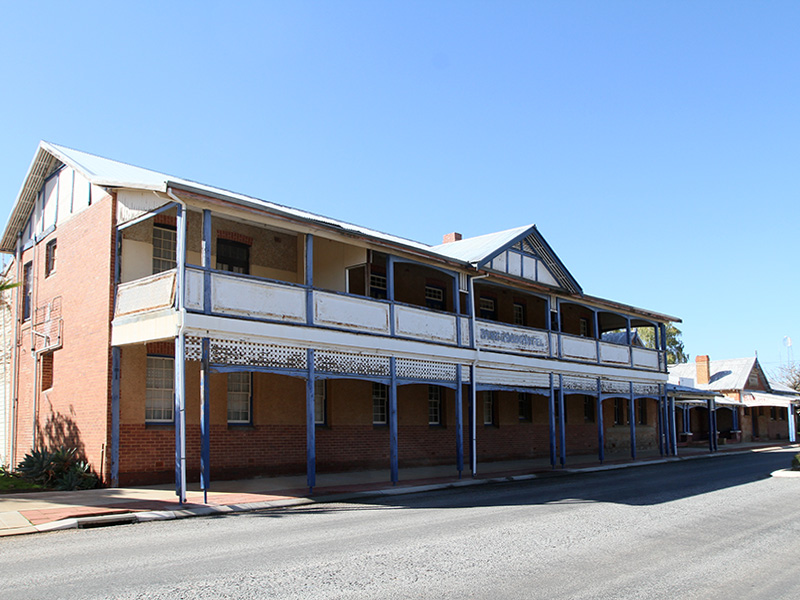 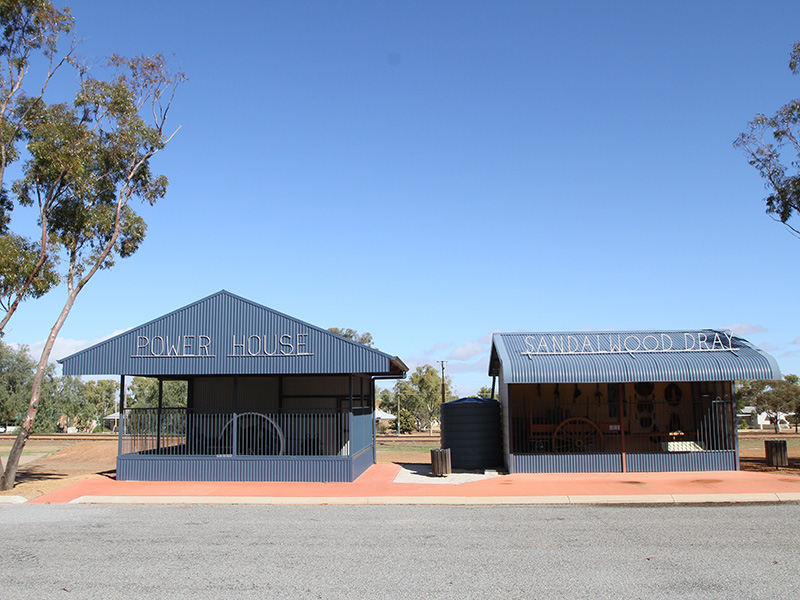 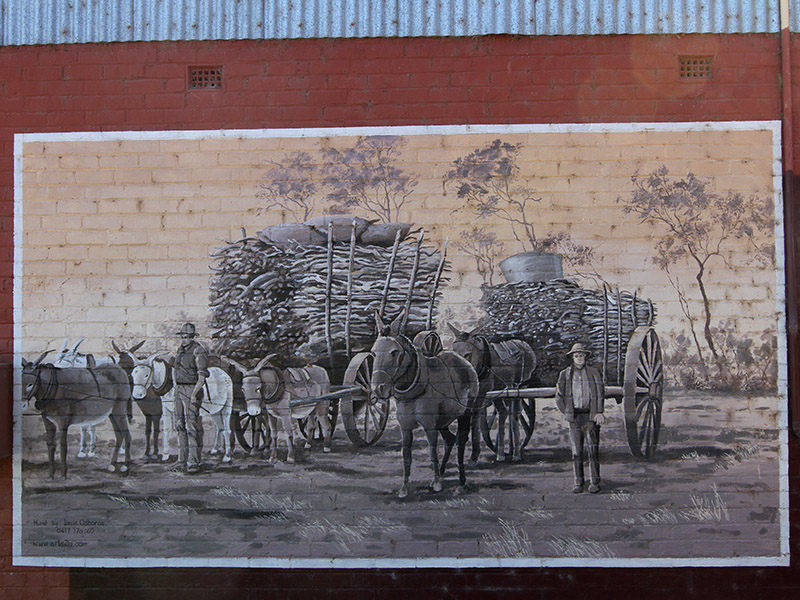 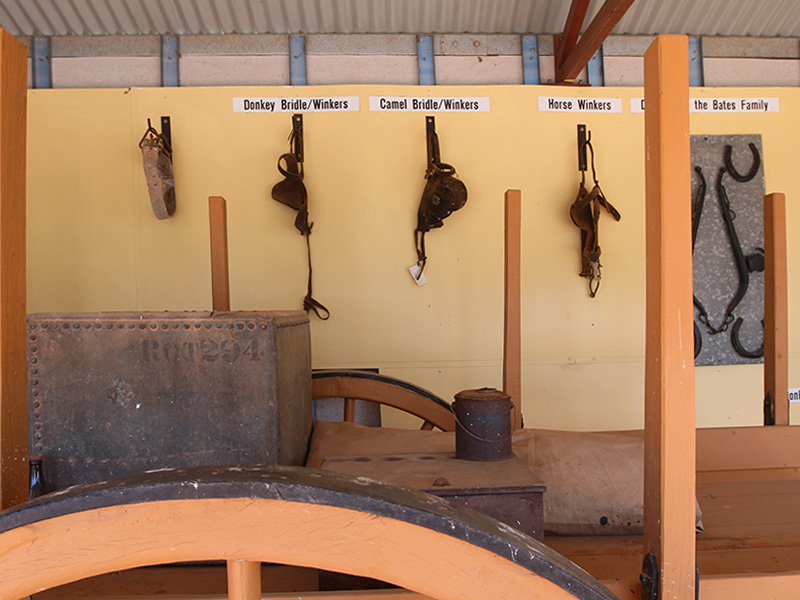 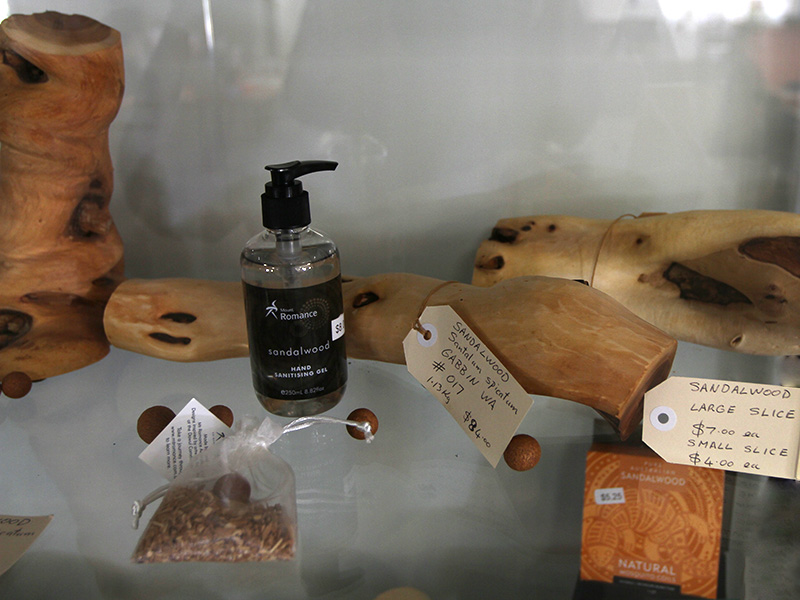 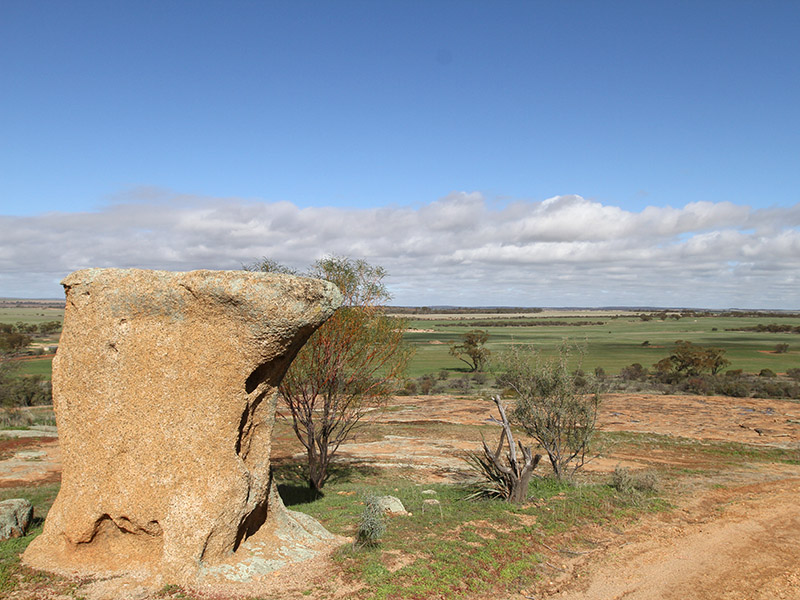 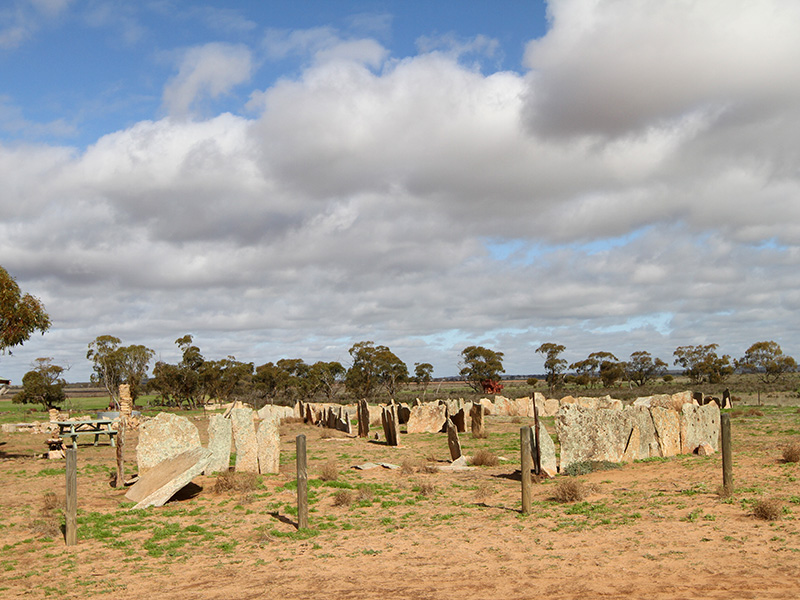 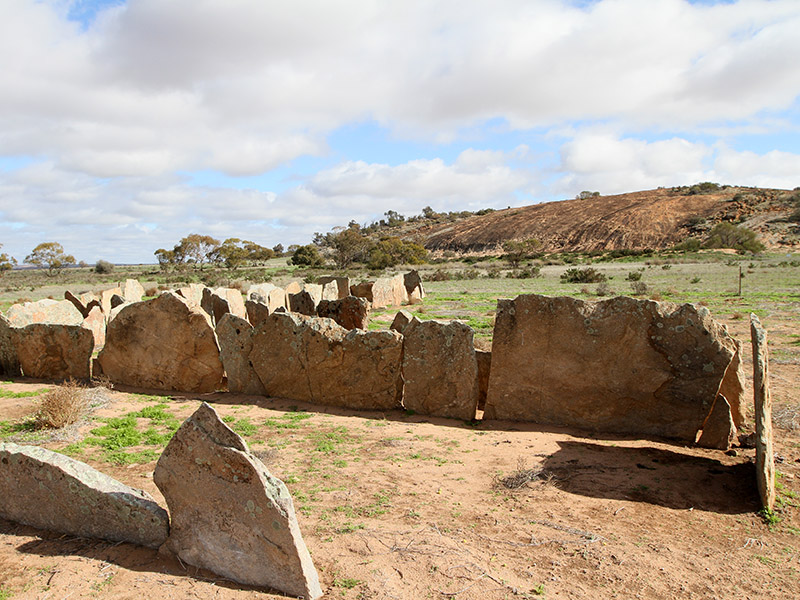