Quiet, isolated and beautiful holiday and fishing town on the Great Southern Ocean

Bremer Bay is a quiet little village on the southern edge of the Fitzgerald River National Park.  It is essentially a sleepy holiday resort and angler's retreat. Its peerless location on some of the most beautiful coastline in Australia, and its isolation from the more developed seaside resorts, has made it one of those places which people speak about in whispers hoping that the hordes never get to find out about the attractions - fishing, swimming, surfing, whale watching, bushwalking and a genuine peacefulness.

Bremer Bay is located 586 km south-east of Perth via Albany. It is located  and 173 km east of Albany on the edge of the Fitzgerald River National Park.

In 1849 the Western Australian Surveyor General, John Septimus Roe, named the tiny port after Sir James John Gordon Bremer, the captain of the HMS Tamar. Roe had served under Bremer from 1824-1827.

Beaches
Bremer Bay is surrounded by some of the most beautiful beaches in Western Australia. It is worth visiting Little Boat Harbour, Blossoms Beach, Short Beach, Fishery Beach and John Cove - all of them are suitable swimming spots and it is quite impossible not to be overwhelmed by the pristine white sands and the clear waters of the Great Southern Ocean.

Fishing
The entire area is known for its excellent fishing although the Department of Parks and Wildlife offers this warning: "The Southern Ocean is unpredictable, making rock fishing and swimming especially dangerous. Huge waves and swells can suddenly occur even on calm days. Rocks become slippery when wet. Rip currents are common along the coastline. Wear a lifejacket at all times when fishing from rocks." One of the most popular places is Fishery Beach where a new marina offers facilities for boat launching and there is a sheltered bay. Experienced anglers should catch species ranging from herring, skippy and salmon. In deeper water fish varieties such as nannygai, snapper and groper can be caught and the Bremer River provides bream, mullet, crabs and prawns in season.

Quaalup Homestead Wilderness Retreat
Located 47 km from Bremer Bay, via Devils Creek Road, in the Fitzgerald River National Park, the Quaalup homestead was built in 1858. The Heritage Council has described the buildings in the group as "a picturesque group of homogenous Victorian Georgian design style quartzite farm buildings comprising a homestead house and substantial ruins of a barn, with 1940s additions to the farmhouse in the Inter-War Georgian Revival style, set in gently undulating terrain amidst the distinctive flora of the Fitzgerald National Park." (see http://inherit.stateheritage.wa.gov.au/Admin/api/file/c055bcd1-2814-74ef-fbdf-0a905e639b43 for more details). For more information about the place and the accommodation options check out http://www.whalesandwildflowers.com.au/quaaluphomestead.html or tel: (08) 9837 4124.

Wellstead Heritage Museum
Located 3 km south of Bremer Bay at 440 Wellstead Road, Wellstead is the original settlement in the region. Built in 1850 of local stone and burnt lime, the museum includes homestead outbuildings (stables, sheep pens, a lime kiln, saw pit and shearing shed), artefacts and antiques. There are over 5,000 items in the museum - tools, saddles, motor vehicles and the first cottage. For details about the museum check out http://www.wellsteadmuseum.com.au.

The Old Telegraph Station
Located at 3 Bremer Bay Road, the Old Telegraph Station was one of the sites for the development of the Overland Telegraph. The first Station was built in 1875 and opened for telegraphic traffic on the 8th May 1876. The original building burnt down and was replaced with the existing stone structure in 1896. In recent years this has been renovated and is now being used as a cafe. The Heritage Council of WA notes that "The telegraph station has considerable architecture and historical significance. Its style is particularly Australian and blends well with the environment. It is built of local stone in a random rubble wall and originally covered in corrugated iron and has verandas on all sides. It has an interesting entrance and ballustrading. Also it was one of the stations that linked the west coast with the south and is important for the early history of the area." Check out http://inherit.stateheritage.wa.gov.au/Public/Inventory/Details/22609db3-cec9-426d-b82b-71075fb1f758.

Fitzgerald River National Park
The beautiful Fitzgerald River National Park, which covers 297,244 ha of coastline between Bremer Bay and Hopetoun, is recognised as one of the largest and most botanically significant national parks in the country because it can claim to have nearly 20% of Western Australia's floral species (1,883 plant species have been identified, 75 of which are found nowhere else); a superb and diverse landscape which includes plains, breakaways, headlands and impressive white beaches and inlets.
It has four rivers cutting dramatic gorges, wide sand plains, isolated mountains, rugged cliffs, pebbly beaches and spectacular displays of wildflowers between August and October.
In A Park in Perspective by Keith Bradby the appeal of the park is explained: "The park sits astride the incised valleys of four major river systems, which flow south-east to the coast. Dominating the southern section is a low range of rugged quartzite hills known collectively as The Barrens, while the core of the park is an extensive undulating plain ... The flora of the park is exceptionally rich and diverse. Although the Park is only 0.2 per cent of Western Australia's land surface, over 20 per cent of Western Australia's plant species occur there. Many of the plant species are endemic to the region, reflecting the tight and varied plant/soil mosaics. Vegetation varies, from woodland on the richer soils through to mallee and mallee heath.
"There are more recorded species of birds, mammals and frogs than in any other reserve in south-west Australia. This is partly a reflection of the park size, but also because of the blending of wet country and dry country species which occur in the park."
In fact recent research has revealed that the park is home to 22 mammal species, 41 reptile species, 12 frog species and more than 200 bird species including rare species such as the western ground parrot, the western bristle bird and the western whipbird.
From Bremer Bay there is limited access to the park. The Fitzgerald River NP brochure suggests entry from the west "Devils Creek Road enters the western section of the park and can be accessed from the South Coast Highway just north of Gairdner. Pabelup Drive connects Devils Creek Road and Quiss Road. The secondary two-wheel drive road network in the western area of the park is unsealed gravel road. Points of interest accessible by two-wheel drive vehicles include Mt Maxwell, West Mt Barren, Quaalup Homestead, Point Ann and St Mary Inlet. The access track to Trigelow Beach is four wheel drive only and may be closed during wet conditions."
Two roads run off the South Coast Highway to the east of Jerramungup. Quiss Road runs down to St Mary Campground and the coast at Point Ann and St Mary Inlet, and Hamersley Drive is a sealed road that winds along the coast between the park’s eastern boundary and Hamersley Inlet. This drive takes visitors to Four Mile Beach, Barrens Beach, Barrens Lookout, East Mount Barren, East Mylies, Mylies Beach, Cave Point and West Beach. There is a very useful website created by the WA Parks and Wildlife Service. Check out https://parks.dpaw.wa.gov.au/park/fitzgerald-river or tel: (08) 9842 4500. The brochure on the park can be downloaded at https://parks.dpaw.wa.gov.au/sites/default/files/downloads/parks/20140471-FitzgeraldRiverNP_brochure_WEB.pdf and the rangers at the west of the park can be contacted at (08) 9835 5043.

Whale Watching
The coastline of the Fitzgerald River National Park is home to southern right whales during the winter months where they come for protection and to nurture their newborn calves. There are two whale experiences available at Bremer Bay:

(i)  Bremer Bay Canyon
Bremer Bay Canyon is located 70 km offshore from Bremer Bay. Naturaliste Charters operate "eco wilderness expeditions" out to the canyon. The tours run from mid-January to mid-April, depart at 7.30 am and return around 3.30 pm.
The Naturaliste Charters website explains what visitors see: "Every year in summer, this newly discovered remote marine wilderness hot spot off the WA coast becomes the epicentre for an unbelievable intensity of life: whaler sharks, giant squid, sperm whales, masses of sea birds and the largest aggregation of killer whales in the Southern Hemisphere.
Why does it happen?
Because the Leeuwin current is at its weakest and it allows the hydrocarbons to reach the surface which is attracting the wildlife. We suspect it’s a leak from a massive hydrocarbon pocket under the seabed, which fuses with the surrounding water to create an ice-like reef known as methane hydrate. This in turn sparks a food chain involving crustaceans releasing billions of nutrient-rich eggs into the desolate waters.
Stunning wildlife
As well as the magnificent killer whale, amongst our regular visitors are the Long-finned Pilot whales, Sperm whales and dolphins. Giant Oceanic Sunfish, shoals of tuna, sharks, extraordinary sea birds, Gray’s Beaked whale, Australian Sea Lions and New Zealand Fur seals are commonly seen.
Marine wildlife has been sighted 100% of the time on the Expeditions. And on average we’ve had a 98% success sighting rate of seeing killer whales at the canyon. Even if they aren’t exactly on the coordinate, we usually find them close by. We see large pods together frequently and even in excess of 100 killer whales have been seen at the canyon at times; it is quite possibly the largest aggregation of orca in the southern hemisphere!" For more information check out http://www.jerramungup.wa.gov.au/tourism/bremer-bay-canyon-/ and download the Naturaliste Charters brochure or tel: (08) 9750 5500.

(ii) Point Ann
At Point Ann in the Fitzgerald River National Park there is an excellent whale watching platform which is recognised as one of the best spots of the coast. From July to October Southern Right whales can be seen carving. They often come very close to the shore. It is also possible to see pods of dolphins and the occasional humpback whale.

* By the 1820s the whalers and sealers who hunted in the southern ocean knew of Bremer Bay and used it as a stopover point.

* In 1831 the explorer John Septimus Roe reached the area.

* In 1841 Edward John Eyre passed through the area after traversing the Nullarbor Plain. Eyre and his Aboriginal companion Wylie made the journey from Thistle Cove to Albany in late June, 1841.

* Eyre was harsh in his observations of the area. His description of Mt Barren in the Fitzgerald River National Park was: "Most properly had it been called Mt Barren, for a more wretched arid looking country never existed than that around it."

* In 1849 Bremer Bay was named by the WA Surveyor General John Septimus Roe after the captain of the HMS Tamar, Sir James Bremer.

* The first European settler into the area was John Wellstead who arrived in 1850.

* The township came into existence with the establishment of telegraph station in 1876. The first operator was Mary Wellstead who was probably the first female telegraphist in the country.

* A second telegraph station was built in 1896.

* In 1962 the town, previously known as Wellstead, was officially changed to Bremer Bay.

There is a useful local website. Check out http://www.jerramungup.wa.gov.au/tourism/bremer-bay. 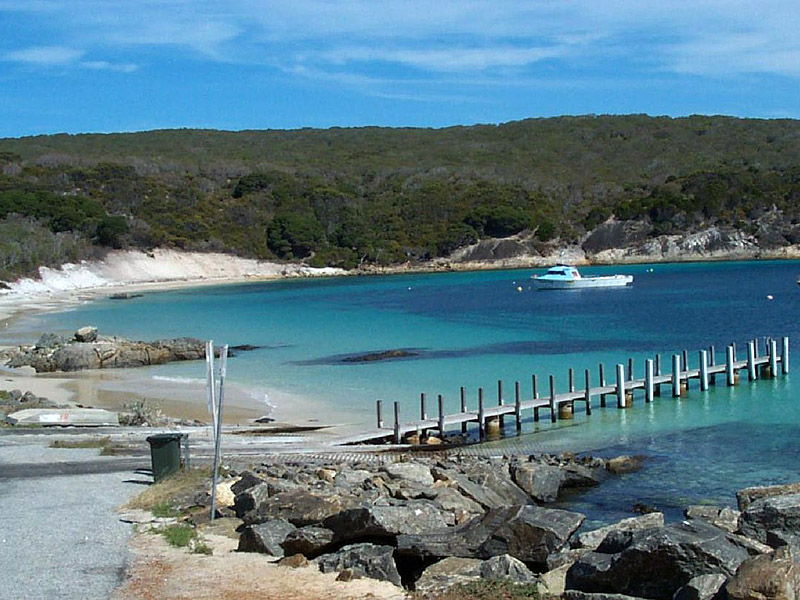 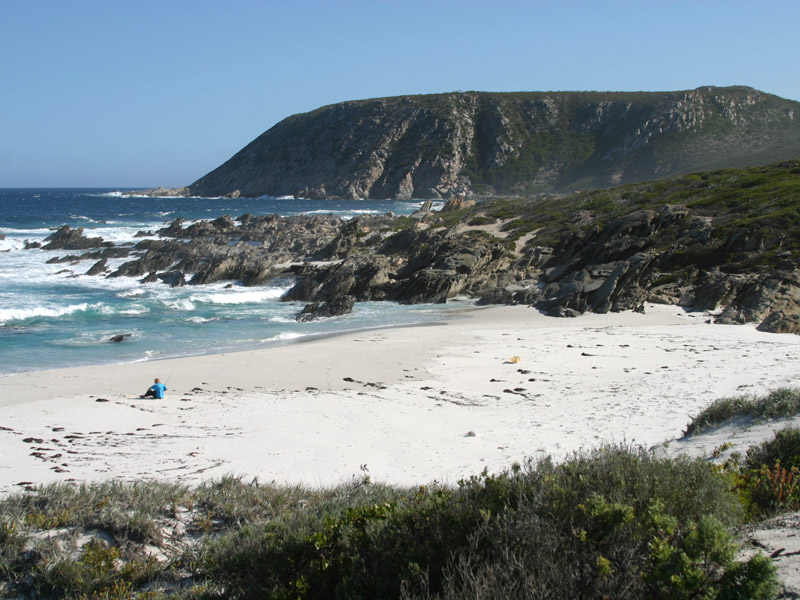 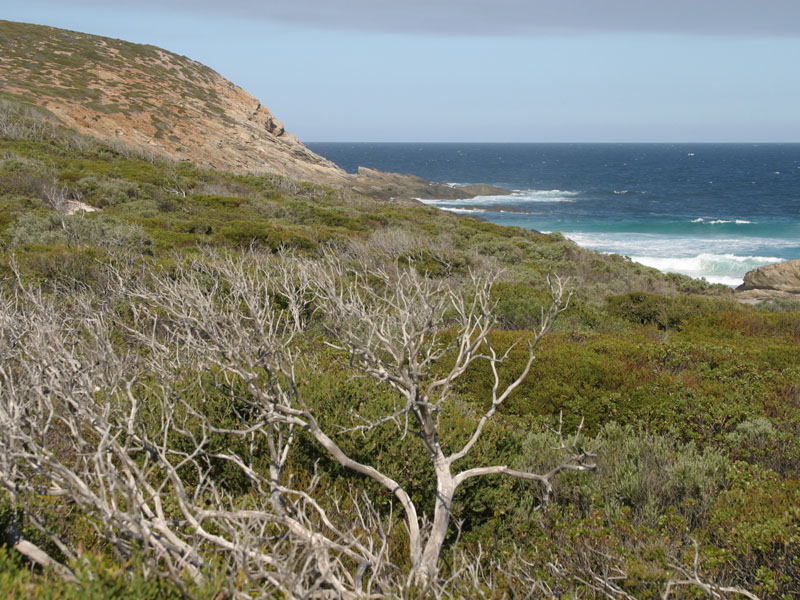 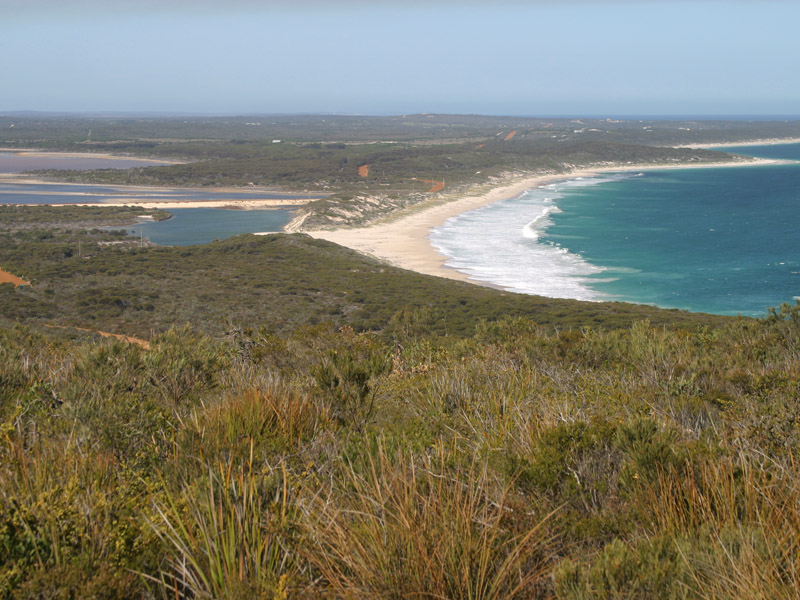 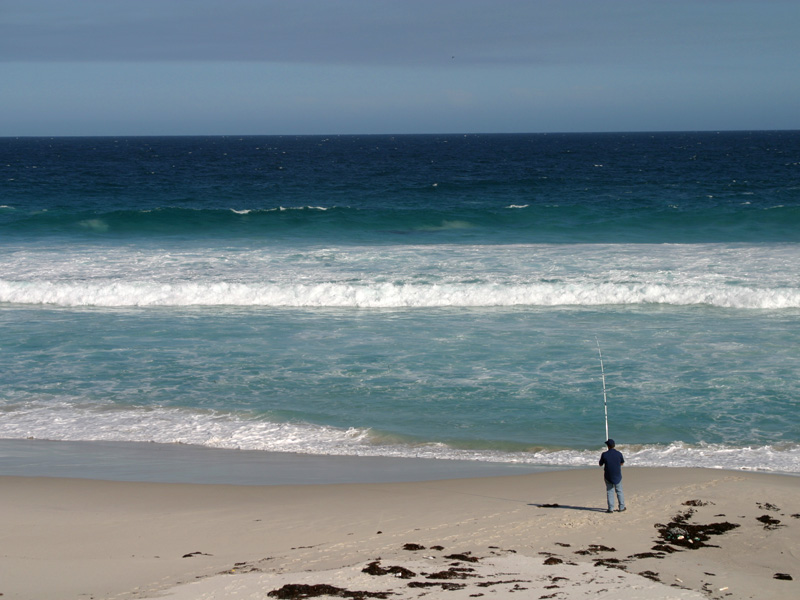 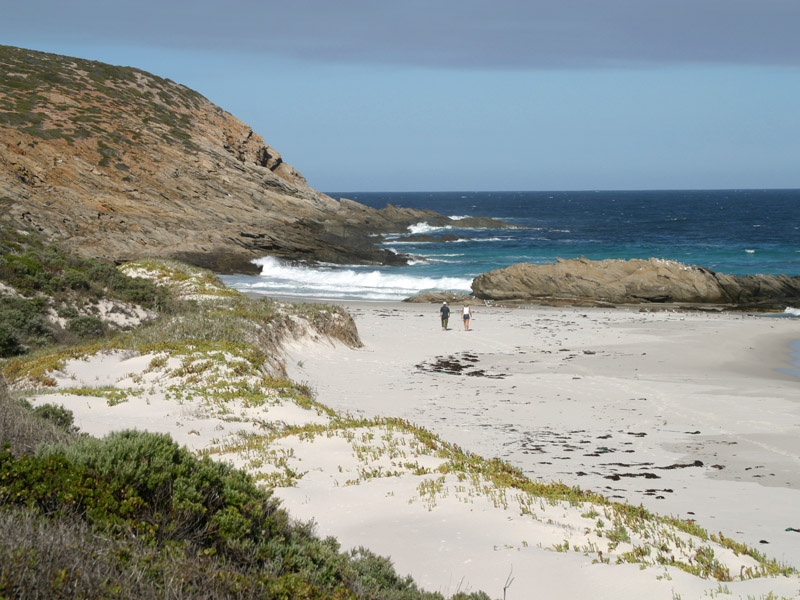