Byrock is a "blink and you will miss it" settlement on the long straight road from Nyngan to Bourke. Once an important watering hole for travellers today it is nothing more than a hotel, a general store, a deserted railway station, an old butcher's shop, an historic cemetery and a few unoccupied homes. The hotel is a popular watering hole which also offers camping facilities and bushwalks through the scrub.

Byrock is located 685 km north-west of Sydney and 78 km on the Mitchell Highway south-east from Bourke.

It is accepted that the root of the town name comes from the Ngemba word "bai" meaning the semen of men and animals. This evolved to became the Bye Rockhole. In the 1880s when the railway arrived the settlement was known as 'Bye Rock'. There is an accepted explanation for the name changing to 'Byrock'. When the post office arrived the postmaster requested a rubber stamp from Sydney and it came back with the incorrect spelling 'Byrock'. The Railway Station Master, eager for a simple solution, cut out the 'e' from the railway sign and it became 'Byrock' as well.

Byrock Water Hole
The water hole, which lies 500 metres to the west of the town just beyond the hotel, has a detailed explanation of its meaning to Aboriginal people.

Creation Story of the Byrock Rockholes.
"The Ngemba (Kurulkiyalu - stone country people) name of this granite rock outcrop is Bai - a word signifying the semen of men and animals. Towards the northern edge of the rock is a small hole in which water collects in rainy weather and during every thunderstorm. There it remains for a considerable time.
The little rockhole called 'Wuggarbuggarnea" was a great camping place for Ngemba, both before and after this part of the country became occupied by European settlers. Still residing in the neighbouring towns of Brewarrina and Bourke and spread through the towns in New South Wales, are the descendants of the Ngemba people.
Baiame - the great creator in Ngemba mythology - had his home at this place in the dreamtime. He dug the rockhole with his
stone axe. Every time it became blunt during the operation, he whet it on the surface near him.
"At other places there are hollows in the rock where the great creator pounded nuts and and ground grass-seed for the purpose of making bread.
"There is a long straight crack in the rock, varying from a metre to half metre in width and about half metre deep, commencing at the rock-hole.
"This is the trail along which the great creator dragged his firewood and larger game. It also served the purpose then as now, of channelling storm water into the rockhole.
"The great creator started his journey from Cobar chasing after a wild bee. on his feet he put bird feathers.
"He followed the insect all the way to a large rock at Wuttagoona where he successfully secured the honeycomb.
"There is still a bees' nest in the rock, but ordinary mortals cannot reach far enough into the crack to get at the honey."
When non-Aborigines arrived in the area they started using the rockhole because it was the only reliable source of water. It does dry up during periods of drought and therefore is not available all the time. At various times Afghan camel drivers, railway fettlers and Cobb & Co coaches have used the water. There is more information at http://www.environment.nsw.gov.au/aboriginalplaces/ByrockRockHoles.htm.

* Prior to the arrival of Europeans the area was occupied by the Ngemba people who belonged to the Wongaipuwan language group. Kurulkiyala, or stone country people, was another identification name as was Gunda-Ah-Myro meaning men who stay out back and never visit rivers.

* Byrock came into existence as a stopping point for Cobb & Co coaches which used the Byrock rock holes to water their horses.

* By 1879 the Mulga Creek Hotel was being used as a Cobb & Co change station.

* On 2 September, 1884 the Great Western Railway from Sydney reached Byrock which was 455 miles and 42 chains (747.39 km) from Sydney and 497 feet (152 metres) above sea-level. The railway was an attempt by the New South Wales government to win back the trade which, at the time, was all going down the Darling River to South Australia.

* By 1885 the New South Wales government was offering blocks of land for sale in the town.

* With the arrival of the train, Cobb & Co started offering a service to Bourke four times weekly. The trip took 12 hours.

* In 1974 the railway branch line to Brewarrina was closed as a result of flood damage.

* The train service from Nyngan to Bourke was closed in May, 1989 due to flood damage. 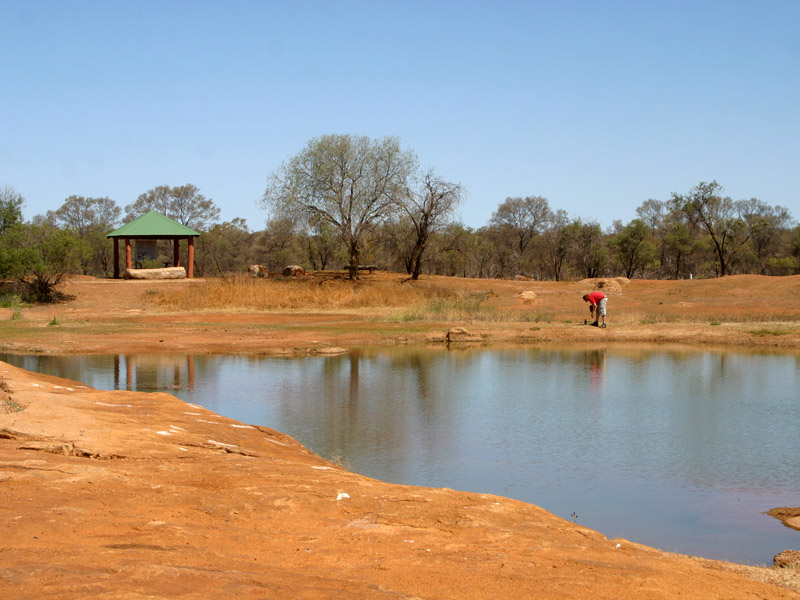 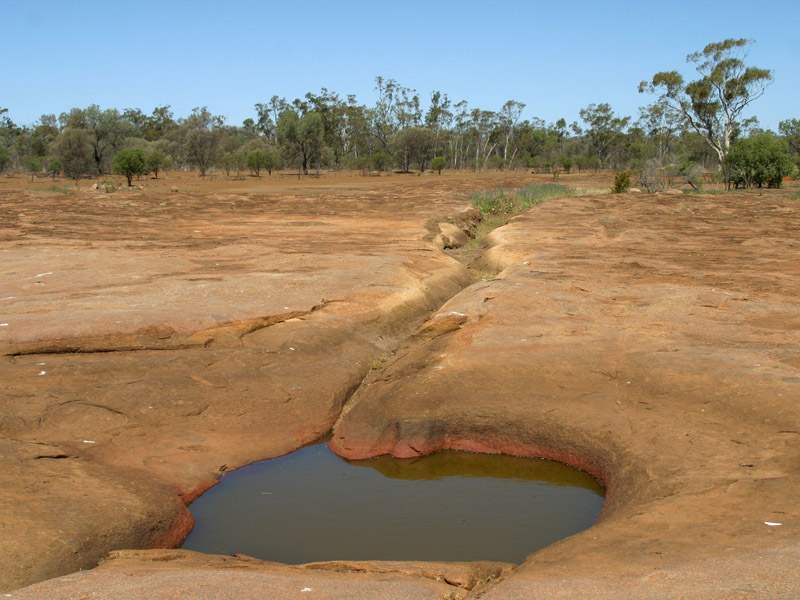 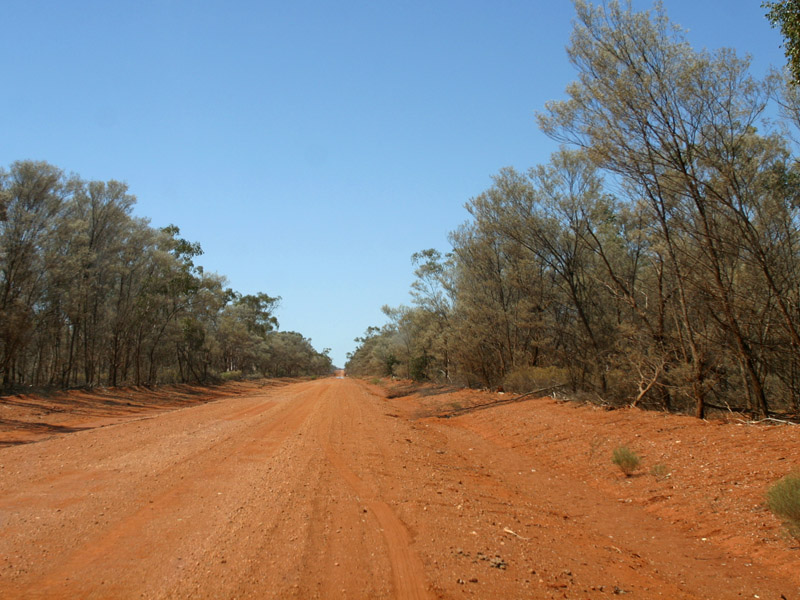 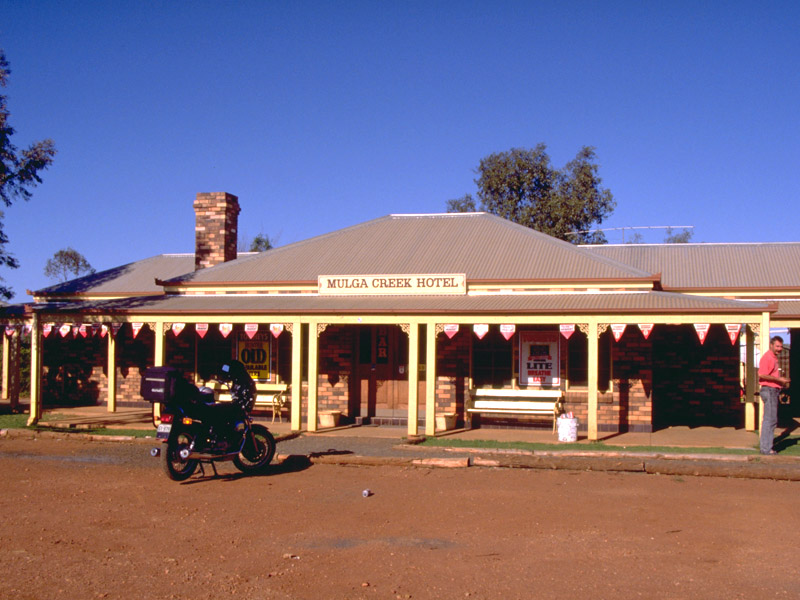