Chillagoe is an impressive combination of a relic copper mine, historic town, limestone caves and Aboriginal rock paintings. It is located to the west of the Atherton Tableland and, although once a thriving mining town, is now little more than the ruins of its industrial past combined with some small mining operations. Still, it is genuinely fascinating, isolated and exotic.

Chillagoe Historical Centre
Located on Hill Street (turn left off Queen Street at the Post Office) is the Chillagoe Historical Centre which has an extensive collection of artefacts relating to the history of the local area. There is a pictorial history of local smelting operations (1901-1943), large mineral samples, an interesting bottle collection, a butterfly collection, old coins and notes, old mining machinery, local pioneering family histories, Aboriginal and New Guinea artefacts, and old dentist's chair and cameras. Of special interest is a hand operated 35mm projector dating from 1910. Check out http://aumuseums.com/qld/far-north/chillagoe-historical-centre.

Chillagoe State Smelters
The Chillagoe Smelters are located 2.3 km from town. Follow Queen Street (the main street), cross the Chillagoe Creek and follow the signs to the Smelters on a road which passes the Chillagoe Limeworks and crosses the railway line.
The Queensland Heritage Register explains the scale of the smelters which "operated until 1943 and in its 40 odd year lifetime treated 1,250,000 long tons (1,270,000 tonnes) of ore, yielded 60,000 long tons (61,000 tonnes) of copper, 50,000 long tons (51,000 tonnes) of lead, 181 long tons (184 tonnes) of silver and 5 long tons (5.1 tonnes) of gold. By 1943, other smelters were built closer to the then major ore producing areas such as Mount Isa. Easy access to these areas outweighed the economic usefulness of the state run Chillagoe Smelter. In 1950, the buildings and equipment were auctioned. Today the site is managed by Queensland Parks and Wildlife Service ... in mid 1900 the Chillagoe Company had operating: three boilers, three steam engines 46 horsepower (34 kW), one active reduction works, two pumps, 0.5 miles (0.80 km) of 2-foot (0.61 m) tramway, 2,600 feet (790 m) of water mains, two brick machines, one clay mill, two saw benches, one traction engine, and a dam constructed, valued at a total of £4,120."
It explains that the significance of the smelters is "as an important element in the great age of mining industry from 1870 to 1914 which opened North Queensland to settlement by Europeans. For much of the period from 1901 to 1943 the Chillagoe smelters and their ancillary industries were major components of the economic activity of the Cairns hinterland. "... the legacy ... was the infrastructure of an entire mineral industry which the State could never have afforded to build for itself, and which functioned in the public interest for over twenty years at very little capital cost. Under both the company and the State, the Chillagoe venture created thousands of jobs, provided railway transport over enormous distances, and kept mines and businesses open throughout the north. Although the Chillagoe smelters never once made a profit, the multiplier effects radiating from them were responsible for a significant proportion of North Queensland's prosperity for nearly fifty years. In the last years the smelters were deliberately being run at a loss by the State in order to continue this economic role in the wider community". Its operation as a State enterprise is significant in its regional history. For more detailed information check out https://environment.ehp.qld.gov.au/heritage-register/detail/?id=600675.

Chillagoe-Mungana National Park
The limestone in the area is the product of an unusual uplift of sediments (including coral) which were deposited in the ocean off the edge of the Australian continent about 400 million years ago. The sea level rose, the continental shelf moved east, and then, about 360 million years ago the sediments were compressed and uplifted.
Today the National Park is a major attraction at Chillagoe with special car parking areas at:

Donna Cave and Trezkinn Cave - Car Park and Tours - located 1.8 km from Chillagoe via Frew Street. This car park provides access to the Donna and Trezkinn Cave both of which offer ranger-guided tours. The tours can be booked at The Hub in Chillagoe.
The Donna Cave Tour, which is a total of 830 metres return from the Car Park, leaves at 9.00 am and has about 440 steps. It is recognised as the prettiest of the caves.
The Trezkinn Cave Tour, which is a total of 835 metres return, leaves at 11.00 am and has 520 steps.
Royal Arch Cave Car Park and Tour - located 6 km from Chillagoe via Queen Street the Royal Arch Cave Tour starts at 1.30 pm, covers a total of 1.3 km return and has around 385 steps. The website describes the Royal Arch tour as "The cave tour takes you through passages and 11 chambers in one of the largest cave systems in the area. Unexpected shafts of daylight, fig trees, glimpses of darting bats, naturally sculptured limestone formations and ancient marine fossils are highlights of this tour." For detailed information, prices and other details check out https://www.npsr.qld.gov.au/parks/chillagoe-caves/cave-tours.html.

Self Guided Cave Tours
The Archways
Lying beyond the Old Mungana Cemetery and located 17 km from Chillagoe, The Archways is only 220 m return (it takes around 30 minutes) from the Mungana Archways car park. It requires a torch. Expect to see skinks and common crow butterflies amidst the dense vine thicket at the entrance to this semi-open cave.

Bauhinia and Pompeii Caves
The Bauhinia and Pompeii Caves can be accessed from the Donna Cave car park which is 1.8 km from Chillagoe.
The Pompeii Cave is 600 metres return from the car park. The website explains that the walk is quite difficult but "Inside this small cave, look for bats sleeping high in dark crevices and rock-wallabies hopping from boulder to boulder. A short but steep climb to the bottom reveals a dark passage and some attractive formations. Torches are required."
Buahinia Cave is only 300 metres return but the grade is difficult and it will take 20 minutes to scramble down a narrow crevice.

Walking in the Chillagoe-Mungana Caves National Park
There are a number of interlocking walks, ranging from 440 metres to 9 km, which connect the caves, the lookouts and the interesting landmarks in the park. It is possible, for example, to walk from the Balancing Rock (a precarious rock perched on the side of a hill which is located only 440 metres from the car park) to the Donna, Bauhinia and Pompeii Caves which are located 2 km through the bushland. The longest track is the Royal Arch Track which is 9 km return, takes around 2.5 hours, and passes the Wullumba Aboriginal Rock Art Site (there are excellent photos at https://natureinfocus.blog/2012/06/30/rock-around-chillagoe-part-6-wullumba-art-sit) as it makes its way from the Balancing Rock Car Park to Royal Arch Cave. The path passes bloodwoods, tea trees, grevilleas and Cooktown ironwoods and offers impressive views from Royal Arch bluff. For more information check out https://www.npsr.qld.gov.au/parks/chillagoe-caves/about.html.

Mungana Archaelogical Area
Located 15 km from Chillagoe is the old settlement of Mungana which was once the site of the famous Lady Jane and Girofla copper mines. It is also the home of the remnants of Old Mungana township and the Mungana Cemetery. The Queensland Heritage Register notes that from the beginning of the twentieth century: "The new township of Mungana quickly grew and had a cricket club, turf club, Progress Association, court house, library and reading room. At its peak in 1920 Mungana had six hotels, three stores, bakery, butcher, confectionary shop, drapers, post office, church, school and livery." For more extensive and detailed information check out https://environment.ehp.qld.gov.au/heritage-register/detail/?id=645601.
To the north of Mungana is The Archways (it is beyond the cemetery on an unsealed road), an open daylight cave system with maidenhair ferns growing in the passageways, and an Aboriginal art site with a number of interesting paintings on the cave walls. There is a map with directions to The Archways which can be downloaded at https://www.npsr.qld.gov.au/parks/chillagoe-caves/pdf/chillagoe-map.pdf.

* Prior to the arrival of Europeans the area was home to Kuku-Yulanji Aboriginal people.

* Chillagoe was first settled as a pastoral property by John Atherton's son William. He had travelled down the Walsh River looking for suitable cattle grazing land and settled at Chillagoe Creek.

* By 1883 James Mulligan had returned and found evidence of copper.

* In 1884 the mining entrepreneur, John Moffat, established a mine and smelter in the area.

* By 1891 William Atherton was operating as a receiving officer

* John Moffat built a private railway line from Mareeba to Chillagoe and Mungana. Work started in 1897 and was completed in 1900.

* The Chillagoe smelter became operational in 1901 and at its peak over 1000 men were employed extracting gold, silver, copper, and lead from ores which were brought from the surrounding area.

* The Chillagoe State School opened in 1902.

* In 1909 a railway running south to Etheridge was opened.

* In 1914 flooding forced the closure of the Chillagoe smelter.

* In 1918 the Queensland Government purchased the railway from the Chillagoe Railway and Mines Co.

* Lime works were established in the area in 1970. 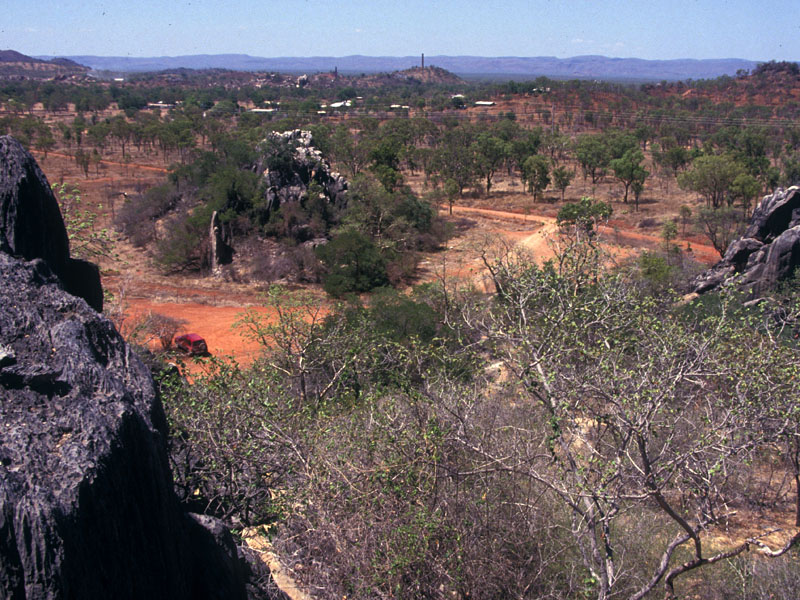 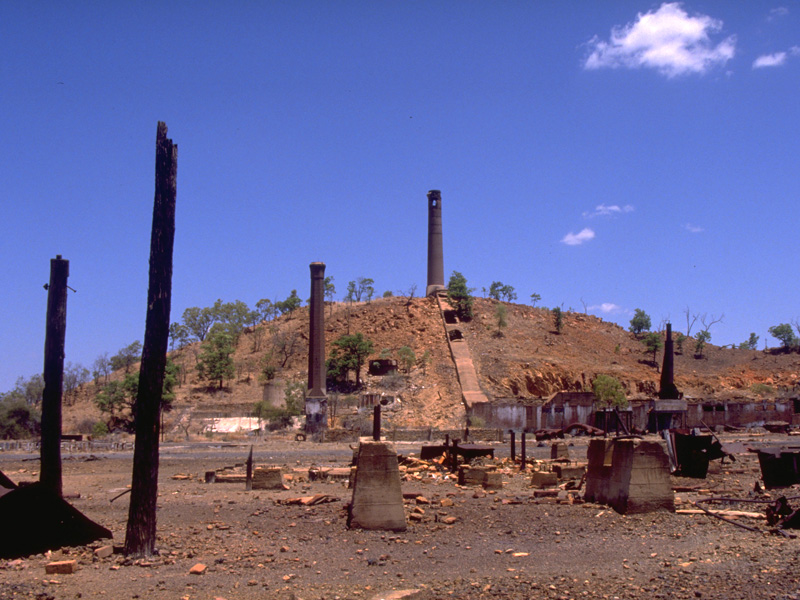 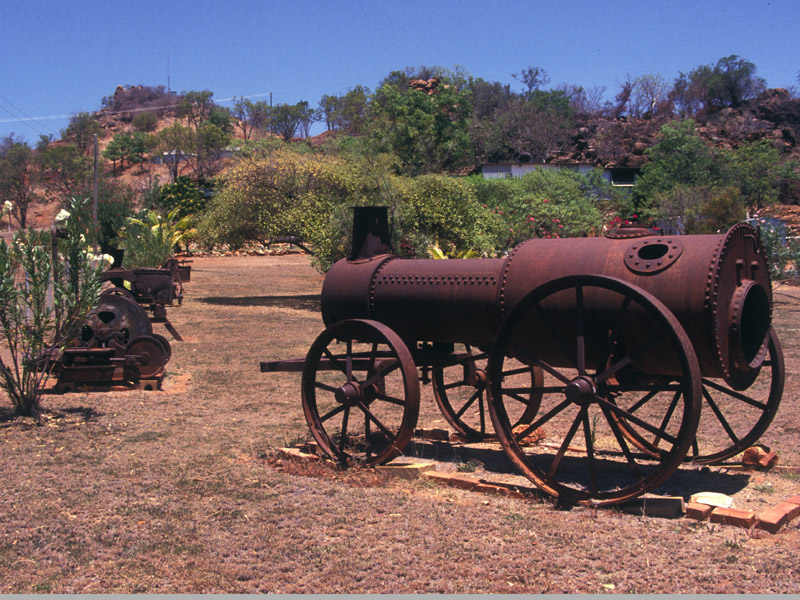 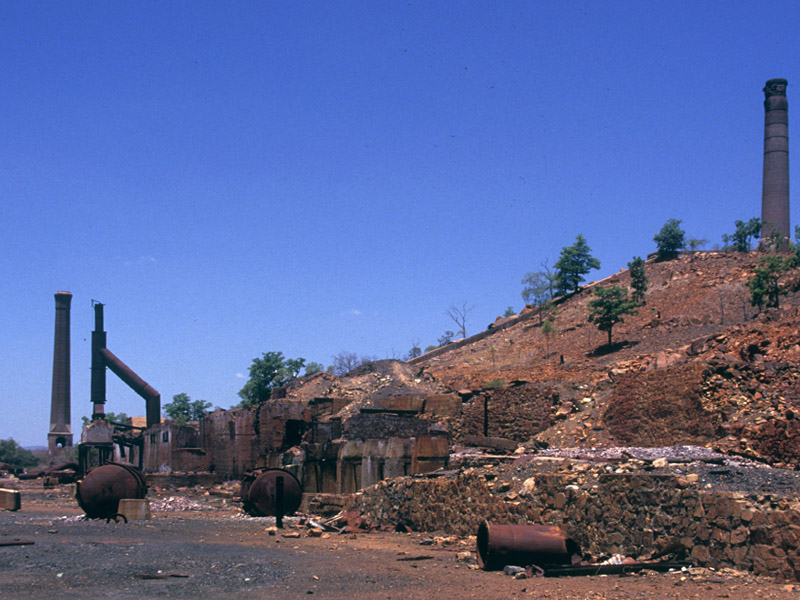 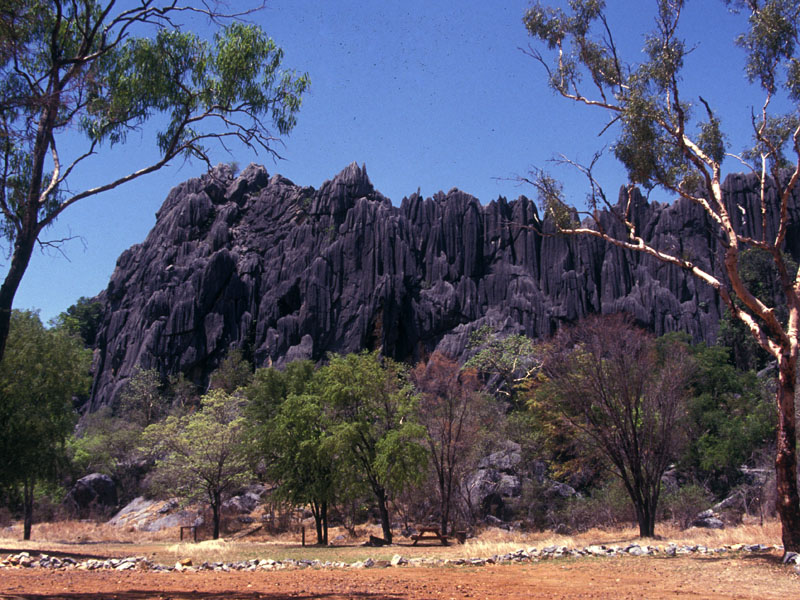 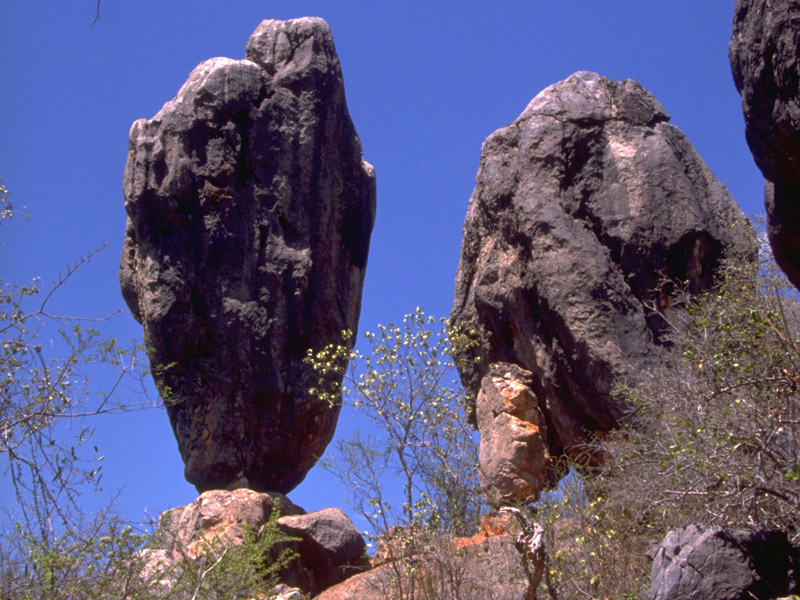