Cootamundra is a prosperous rural service centre whose fortunes have historically depended on its location at a major junction on the Sydney-Melbourne railway line. It has become an evocative town with Cootamundra Wattle (Acacia baileyana) evoking images of the Australian bush. The connection with Donald Bradman (it was his birthplace) gives the town a link with Australia's most famous sportsman.

Cootamundra is located 382 km south-west of Sydney via the Hume Highway to Jugiong and then via Jugiong Road. It is 318 metres above sea level.

Cootamundra is probably derived from a Wiradjuri word 'gooramundra', which means either 'turtle', 'swamp', 'marsh' or 'low-lying'. It was officially adopted for the settlement in 1861 when the government decided to construct a "village of Cootamundry". It was not changed to Cootamundra until 1952.

Sir Donald Bradman's Birthplace and Memorabilia Cottage
"Stand in the place where Sir Donald Bradman was born" is the proud claim of the simple timber building located at 89 Adams Street. It was not the Bradman family home but rather 'Granny' Scholz's private hospital where the child from Yeo, 20 km north of Cootamundra, was born on 27 August, 1908. As far as Australia is concerned, Bradman was the greatest cricketer of all time and, some would argue with no real basis for the claim, the greatest sportsperson of all time. The building is open from 9.00 am - 5.00 pm seven days a week and, in many ways, is a shrine for cricket lovers who wish to indulge their fascination with this remarkable cricketer. Certainly his achievements as a batsman are never likely to be equalled (his test average of 99.94 is far ahead of his nearest rival) and his status as a quiet, unassuming, Aussie high achiever is secure - although there is a lot of evidence that he was rather sectarian when it came to the Roman Catholic crickers he played with and captained. Bradman's parents moved to Bowral when he was only two and a half and consequently there is a both a huge cricket museum and the international standard Bradman Oval at Bowral. Still the birthplace is genuinely interesting. It houses Bradman memorabilia. Check out http://www.bradmantrail.com.au/cootamundra.php and http://www.cootamundra.nsw.gov.au/tourism/attractions/bradman-s-birthplace.aspx for more information. Located next door is Memorabilia Cottage which has displays of everything from old convict-made bricks to tobacco tins and a Trafalgar drip cold safe.

Jubilee Park and The Captain's Walk
Jubilee Park is located in Wallendoon Street. It is an attractive park ideal for a picnic but the main appeal is the impressive collection of 42 bronze busts (all on plinths) of the Australian cricket captains. It is known as the Captain's Walk and is an enterprising way to connect the town of Bradman's birth with the national obsession with cricket. Amusingly there is some controversy about the origins of the walk. Some sources argue that it was completed in 1998 and unveiled as part of Sir Donald Bradman's 90th birthday celebrations. Others, including the town's visitor guide, say it was created "to coincide with Sir Donald Bradman's 100th birthday and formally opened on 27 August, 2008 with a full size sculpture of 'The Don' being unveiled by the great man's grandson, Tom." Certainly it is a fascinating walk through the park with a comprehensive collection of every Australian cricket captain including, at the Wallendoon Street end, Unaarrimim (the Aboriginal captain of the team which played England in 1868). Beyond Unaarrimim are busts of Richie Benaud, Allan Border, Mark Taylor, David Gregory, William Lawry, Robert Simpson, Ian Chappell and Greg Chappell, and lesser known captains, Arthur Morris and William Murdock.

Cootamundra Railway Station
The first Cootamundra railway station dates from 1877 when a temporary station building, goods shed and Station Master's Residence were built to meet the rail line which had been extended from Harden. It was officially opened on 1 November, 1877. This is not the building we see today. The current railway station was constructed, in a grand Victorian Italianate style, in 1888. It is a distinctive and impressive building with an octagonal central tower, a classic Australian bull-nose roof and the platform roof is held up by fluted iron columns with lace brackets. The NSW Office of Environment & Heritage website explains: "The station is constructed of face brick laid in Flemish bond with corrugated iron clad roof and bracketed eaves. Two transverse gable ends feature traceried bargeboards and porthole ventilators. Running between the gables and the tower are two bullnose verandahs each with timber posts and cast iron frieze and brackets. The building features lower level attached wings to either side which have been altered from their original configuration. Original windows and doors are semicircular arched, while windows in the later additions are simple square head timber double hung windows and rendered sills. Corrugated iron awnings are mounted over some windows. Major alterations to the station building took place in 1904-5, 1915 and 1943, all largely sympathetic to the original building. Plans dating c1922 show the building as internally comprising of a central public lobby and waiting room, a ladies waiting room, lavatories, a Station Master’s office, booking office, and parcels office." Cootamundra was the junction and changing point for all trains travelling from Sydney to the Riverina and South West Slopes as well as being a major stopping point on the Sydney-Melbourne rail link. For a very detailed history of the station check out http://www.environment.nsw.gov.au/heritageapp/ViewHeritageItemDetails.aspx?ID=4806261 which provides information about the vast number of structural changes since 1877.

Cootamundra Heritage Centre
Located next to the Railway Station in the old Railway Barracks, the Cootamundra Heritage Centre was established in 2001 as a Centenary of Federation Project. It records the Aboriginal history, history of the railway, town's involvement with aviation, and the history of Cootamundra's involvement with the military in a series of displays. Tel: (02) 6940 2190, Open 9.30 pm - 4.30 pm winter; 9.00 am - 5.00 pm summer.

Historic Buildings in the centre of Town
There are about thirty buildings and places of historic interest in Cootamundra. The most interesting include:

Post Office
Located at 90 Wallendoon Street, the Post Office dominates the main street. The four storey clock tower "towers" above the building which was built in 1881 and is classified by the National Trust. The building was designed by the Office of the Colonial Architect. It is characterised by four-panelled windows and doors, a timber veranda and the clock tower with its ornamental fleche and weathervane.
National Australia Bank
Over the road, on Wallendoon Street, and originally the CBC Bank, the current National Australia Bank is an elegant Victorian Classical stuccoed brick building which was completed in 1887 and designed by the prolific Mansfield Brothers. It has a cast iron veranda on two sides and attractive cast iron balustrades. It is topped off by two chimneys.
Court House
The impressive local Court House, built in 1901 and located in Parker Street, is characterised by an Ionic portico, slate clad hips on the roof and multi-paned windows. Court House buildings were often symmetrical and this is a fine example of a rural Court House during the Federation era.
Westpac Bank
Located at 250 Parker Street and originally the Bank of New South Wales, this interesting building is an elaborate Late Victorian two-storey structure. It was designed by Varney Parkes and completed in 1895. It has arcaded verandas, a gabled main entrance and a large bay window over a small portico. It is a statement about the prosperity the railway had brought to the town and the district.

John Barnes Grave
John Barnes was shot by the bushranger John O'Meally (1841-1863). Barnes, who was a businessman in Cootamundra, is buried in the local cemetery which is located 1.5 km out of town on the Young road. The grave is located in the Church of England section and the inscription reads simply:"Erected to the memory of John Barnes who was shot by bushrangers on 30th August, 1863. Aged 51." O'Meally attempted to rob Barnes. Barnes attempted to escape and was fatally shot.

Cootamundra Bird Walk
For "twitchers" the Visitor Information Centre has a single sheet with an extensive list of the birds that can be viewed around Cootamundra. The combination of parks and the Muttama Creek ensures that the visitor can expect to see kingfishers, eagles, spoonbills, robins, sulphur crested cockatoos, galahs and honeyeaters. In total 110 birds are identified in the brochure.

Gardiner's Lookout
Located about 13 km south of Cootamundra on the Olympic Way, Gardiner's Lookout, named after the bushranger Frank Gardiner, is a large rocky outcrop which was reputedly used by bushrangers planning to rob the mail coaches and gold escorts as they passed. It is claimed that the bushranger Frank Gardiner, famous for holding up the Gold Escort at Eugowra, used this lookout as a vantage point to scour the countryside for troopers who were looking for him.

Bethungra Railway Spiral
Only 10 minutes south of Cootamundra (on the Olympic Way between Cootamundra and Wagga) it is possible to see the Bethungra Railway Spiral - it is where the railway line north spiralled 360° around Bethungra Hill crossing itself and the south line, passing through two tunnels, and traversing some of the deepest cuttings in Australia. For detailed directions check out http://www.visitnsw.com/destinations/country-nsw/wagga-wagga-area/junee/attractions/bethungra-rail-spiral which explains how to see this usual piece of railway engineering. Of equal interest is the impressive Bethungra Hotel which was built in 1886. There is a detailed history, and information about accommodation and eating at the hotel at  http://www.visitjunee.com.au/f.ashx/$20539$information-shirley-hotel-b-b.pdf.

Migurra Reserve
Located on the road between Cootamundra and Junee, the Mingurra Reserve is managed by the Dudauman Frampton Landcare group and is preserved for bird watching, bushwalking and (with permission) seed collection. Five acacia species grow in the reserve which is particularly impressive during July and August when the wattle is in bloom. Check out http://www.cootamundra.nsw.gov.au/f.ashx/15239-m2.jpg for a map and more information.

* Prior to European settlement the Cootamundra area was inhabited by the Wiradjuri Aborigines.

* There is evidence that Europeans were in the area from as early as 1830.

* It was on the site of Hurley's horse paddock, on the banks of the Muttama Creek, that government surveyor, P Adams, marked out a village in 1860.

* The name of the town was adopted in 1861 when the government decided to construct a 'Village of Cootamundry'. Town lots were auctioned in 1862.

* Gold mining started at the Muttama Reef mine in 1862 and, while it was never in the town, it attracted large numbers of miners to the district.

* Inevitably gold attracted bushrangers to the district and in 1863 John Barnes was shot dead by bushranger John O'Meally during a hold up.

* In 1864 the first 'receiving office for mail' was established in the village.

* By 1866 the town had a proper Post Office, a police station, two hotels and about 100 residents.

* The first school in the district was opened in 1875. A flour mill was opened that same year.

* In 1877 the town got its first newspaper, the Cootamundra Herald, and the paper was able to record the rail connection between Cootamundra and Sydney. The town became the hub for a number of railway branch lines to various parts of the Riverina and South West Slopes.

* In 1878 Mary Gilmore began to teach at the local school. At the time she 13 and working as an unpaid pupil-teacher. She would eventually become the famous Australian poet, Dame Mary Gilmore.

* In 1884 Cootamundra was gazetted as a municipality.

* The town's first rail disaster - resulting in 7 deaths and 45 injuries - occurred in 1885 at Salt Clay Creek.

* The Cootamundra Gaol took in its first inmate in 1885.

* The District Hospital was opened by Lord Carrington, Governor of NSW, in 1889.

* The oldest country golf club in New South Wales was established at Cootamundra in 1895.

* In 1935 the town's Olympic swimming pool was opened.

* 1952 - the name Cootamundra was finally officially gazetted. It had been Cootamundry since 1860. 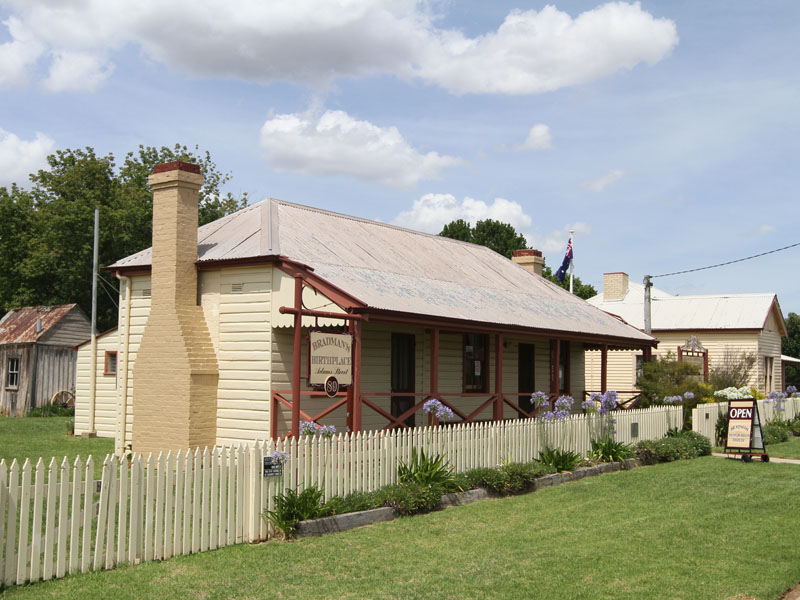 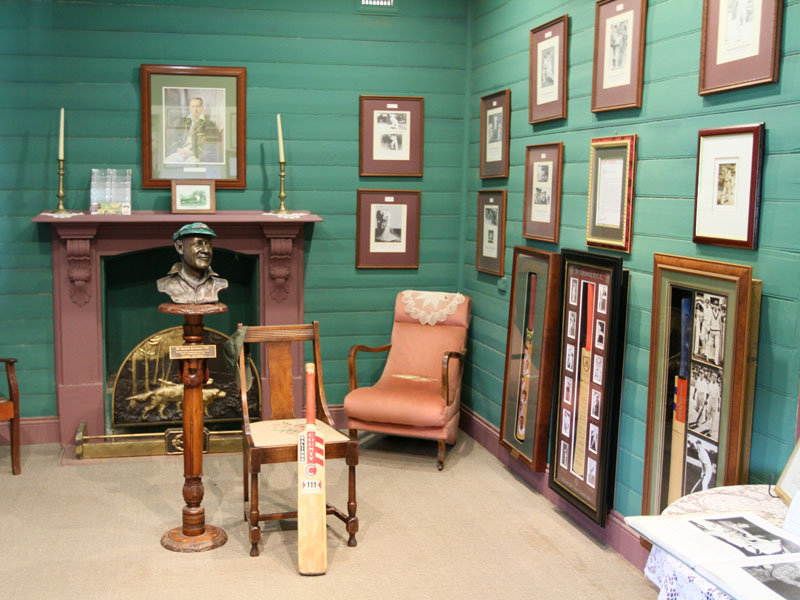 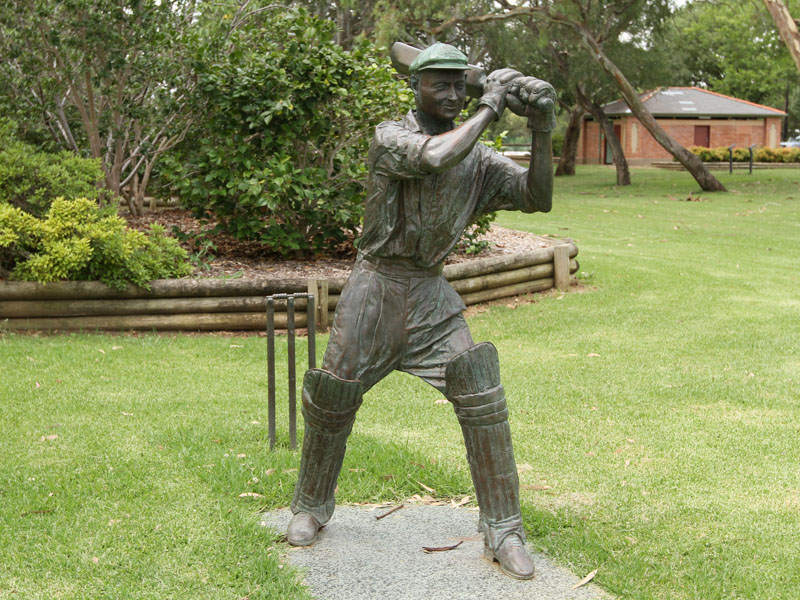 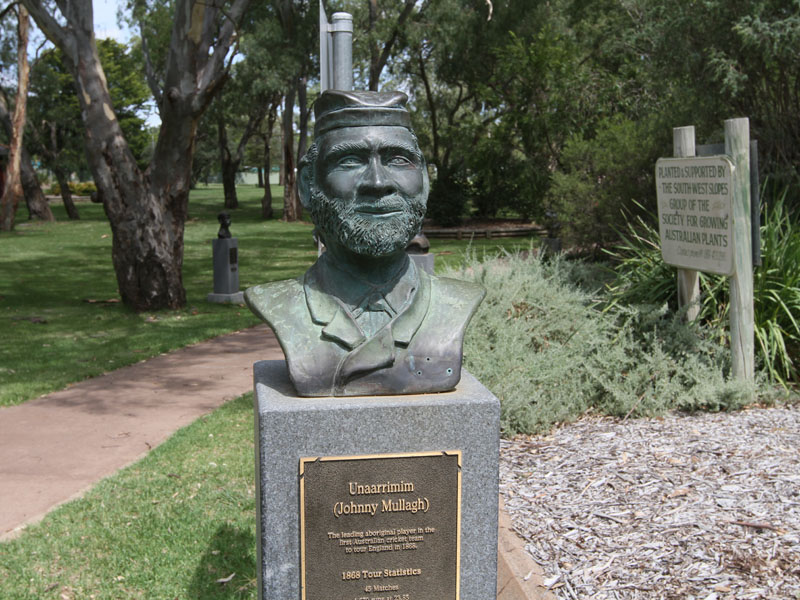 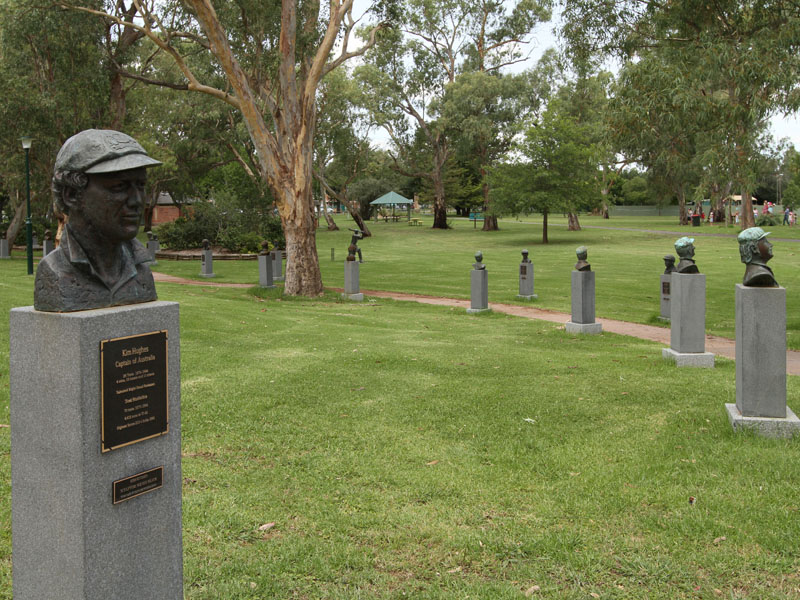 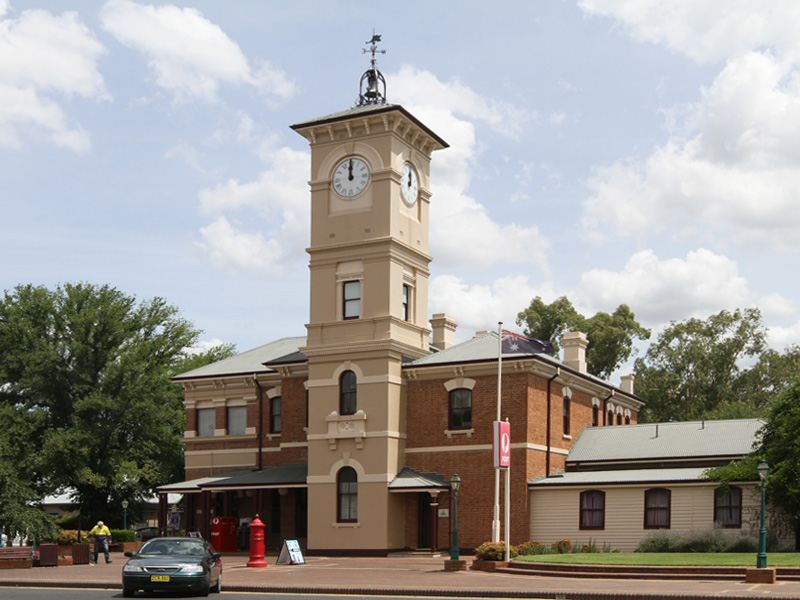 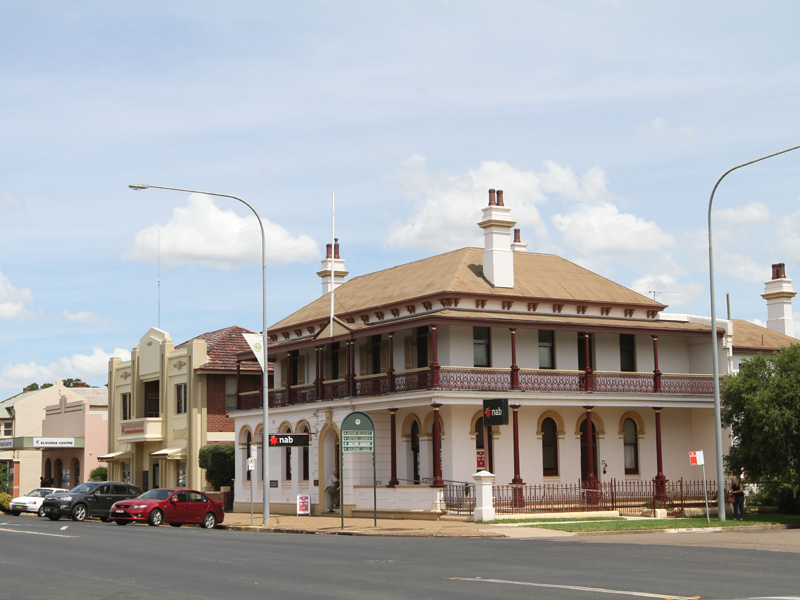 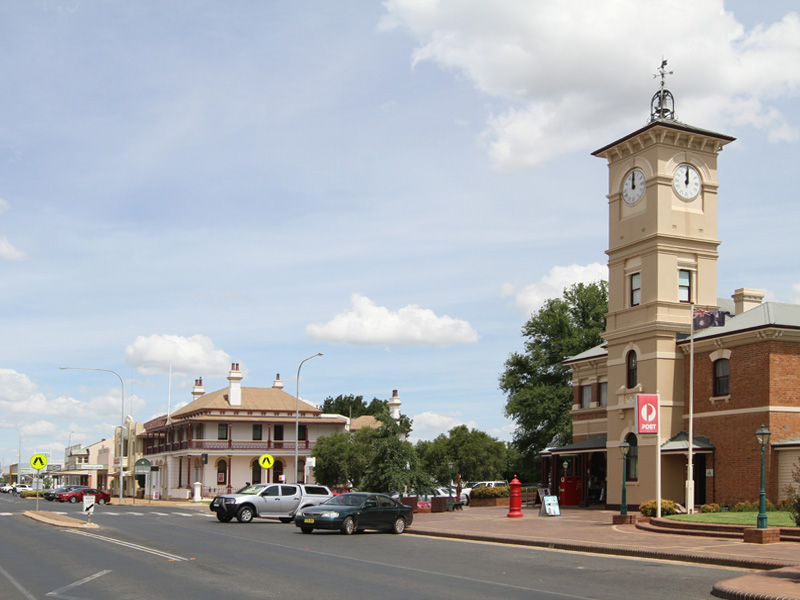 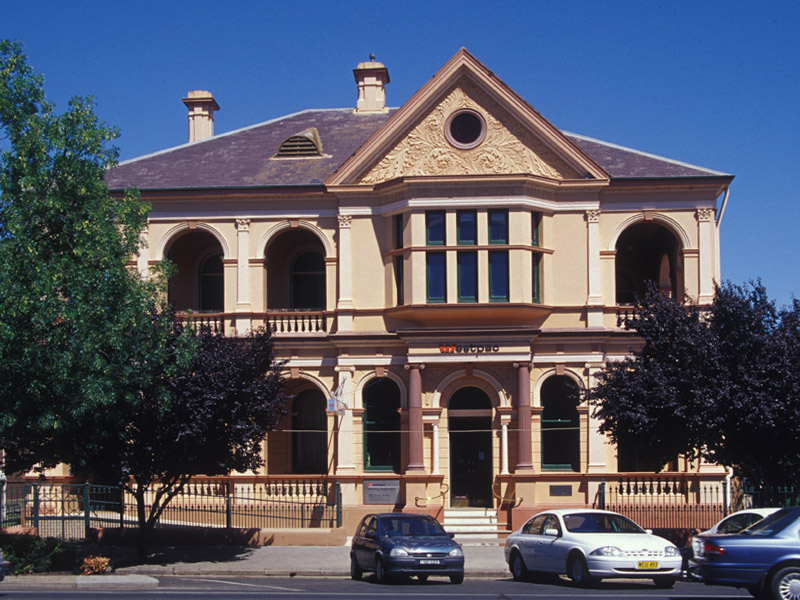 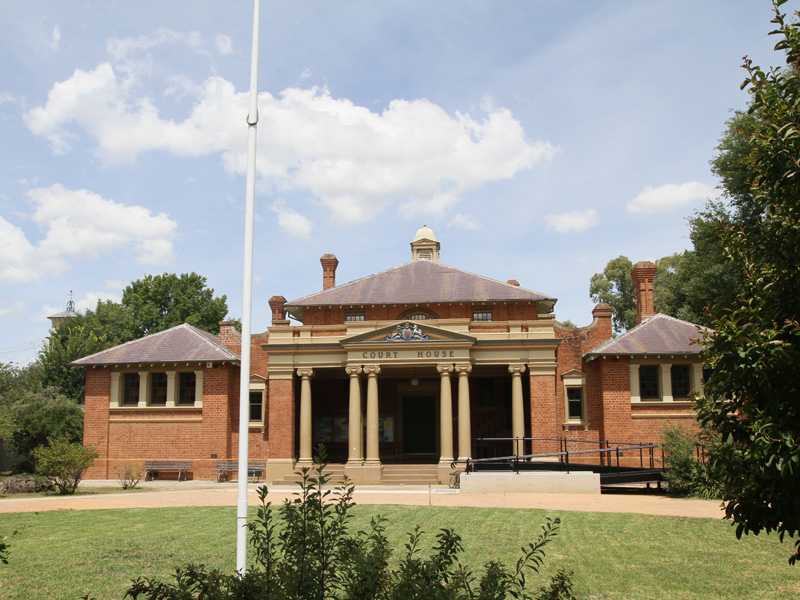 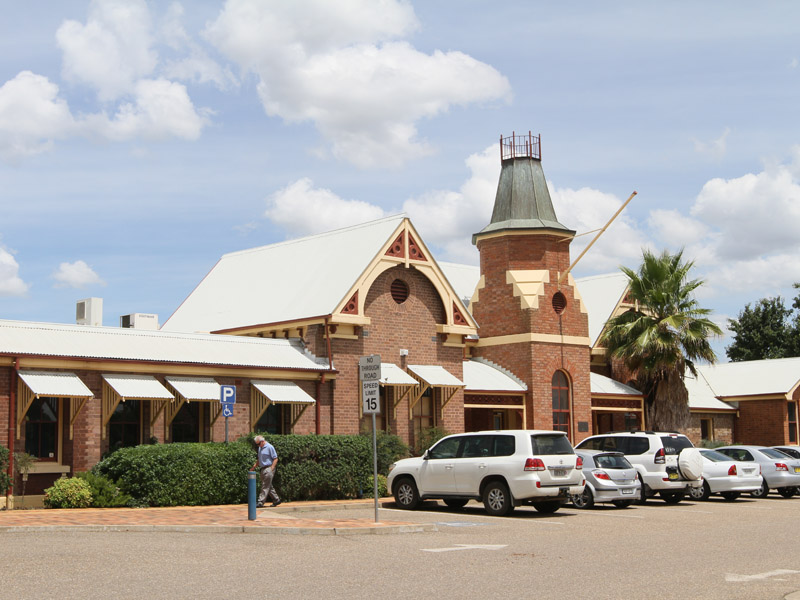 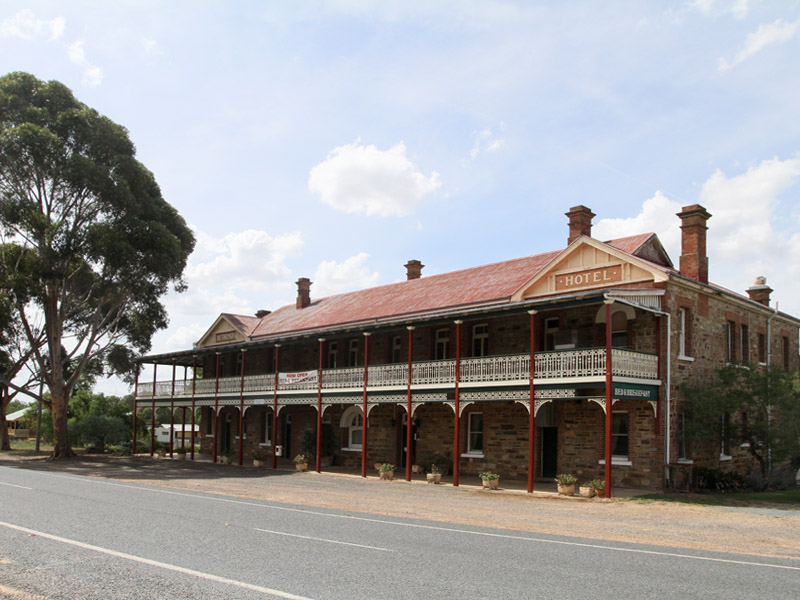