Town made famous by its connections with Jack Riley, the real Man from Snowy River.

Located on the Murray Valley Highway just south of the New South Wales-Victoria border, Corryong is a rural service town which promotes itself as the true home of "The Man From Snowy River". It is a pleasant destination nestled in a valley and surrounded by National Parks and wilderness areas.

It is claimed that 'corryong' comes from a Jaitmatang Aboriginal word "cooyong" meaning "bandicoot". It was named after the Kuriong pastoral run which was taken up in the area in 1839. There are other interpretations of the word which include "a possum skin garment" and "red ochre body paint".

Horrie the Wog Dog
Beside the RSL Memorial Hall in Hanson Street  is a bronze statue of Horrie the Wog Dog (it was unveiled in 2016) with the following inscription: “An Egyptian Terrier was befriended in 1941 by Private Jim Moody in the Middle East. Horrie worked as an air sentry alerting troops to approaching enemy aircraft and was promoted to rank of corporal. Horrie was smuggled back to Australia and escaped being put down by Australian Quarantine Officials to live his life out near Corryong.”
Horrie was an Egyptian terrier who, because he had exceptional hearing, could anticipate bombing raids before the Aussie soldiers could hear the aircraft. As a result he became the unofficial mascot for the 2/1st Machine Gun Battalion of the Second Australian Imperial Force after he was befriended by Jim Moody, a soldier serving in the unit. Horrie followed the battalion throughout the Middle East and in Greece and Crete, before being smuggled back to Australia in 1942. There is a theory that Horrie was destroyed by quarantine officials upon his arrival but a much more romantic version is that his owner, Jim Moody, smuggled him down to a property outside Corryong where he happily lived out his days.
Horrie's story was originally written up by Ion Idriess, a popular non-fiction writer in the 1940s and 1950s, and the story has recently been rewritten (the original name was considered non-PC and so it was changed to Horrie the War Dog) and can be purchased from the Visitor Information Centre.

Jack Riley's Grave and about Riley
The town's cemetery is located around the corner from Memorial Avenue. It is home to the grave of Jack Riley (born 1841) who is widely regarded as the inspiration for A.B. 'Banjo' Paterson's famous ballad The Man From Snowy River (1890). The very simple grave has the inscription: "In Memory of The Man From Snowy River, Jack Riley, Buried Here 16th July 1914". Riley migrated from Ireland in 1851, worked as a tailor at Omeo and, while living in the area, started working as a stockman. He gained local fame as an exceptionally gifted mountain rider, horse-breaker, bushman and tracker of wild horses. While working as the manager of the Tom Groggin cattle station in the Upper Murray Valley he undertook the hair raising and dangerous ride which lies at the centre of Paterson's poem. Paterson had met Riley while on a camping trip in the area and was inspired by his tales of adventure. The grave is easy to locate. It lies to the left of the main gates. It is unpretentious and appropriately simple.

The Visitor Centre & Man from Snowy River Sculpture
The town is a sustained celebration of the Man from Snowy River, for reasons that are already obvious. Perhaps the most impressive expression of the iconic poem is the outstanding sculpture beside the Visitor Centre. The image captures perfectly the lines "He sent the flint stones flying, but the pony kept his feet, / He cleared the fallen timber in his stride / And the man from Snowy River never shifted in his seat - / It was grand to see that mountain horseman ride." It was created by Brett Garling, a sculptor and artist who lives near Dubbo in New South Wales, whose dual specialities are horses and action. He has created horse sculptures of Simpson and his Donkey and galloping horses during the Boer War. The sculpture was unveiled in 2010.

Man From Snowy River Museum & Riley's Village
The Man From Snowy River Museum is located at 103-105 Hanson Street in the town's old shire offices. It is a mixture of a local history museum and a number of historic buildings including an old lock-up and a slab timber hut set up as an old-fashioned dairy. The Jarvis Homestead, built in 1876 in the Cudgewa area, was reconstructed on-site by the local Rotary Club. The collection includes such rarities as a pair of wooden skis dating back to the 1870s (including a pram on skis owned by Olympic skiers Thomas and Elyne Mitchell), some Victorian-era fashion garments and an unusual rug handmade from remnants of material by a World War II POW, Jim Simpson. It also tells the story of Jack Riley, the Man from Snowy River, and has a number of personal mementoes. It is open daily from 10.00 am to 4.00 pm from September to May and 1.00 pm - 4.00 pm from June to August. Check out http://www.manfromsnowyrivermuseum.com.au/ or tel: (02) 6076 2600.

Playle's Lookouts
South of the town, off the Back Thowgla Road (which runs off Donaldson Street - which is at the northern end of town), is Playle's Lookout. It provides panoramic views of the town, Mount Mittamatite and the Corryong and Thowgla valleys as well as picnic tables and good car parking. A genuine panoramic view of the town is difficult as trees have grown up obscuring the centre of town. There are a collection of photos taken from the lookout which can be accessed at http://www.visituppermurray.com.au/attractions/playle-s-lookout-and-picnic-area.

Towong
Located 11 km north-east along the Tintaldra Road is Towong which was laid out in 1861. The local turf club was established in 1871. The racecourse and grandstand were used in the filming of Phar Lap. In 1928 the infamous Melbourne criminal Squizzy Taylor and his gang caused a disturbance at the racecourse and stole a substantial sum of money in the confusion. Taylor then stopped at Corryong where he robbed a local publican.

Burrowa-Pine Mountain National Park
Burrowa-Pine Mountain National Park (18,400 ha) is 25 km northwest of Corryong. It is characterised by rugged and contrasting mountains and two areas containing very different types of vegetation. The highlights of the park are Bluff Falls, a spectacular set of falls, and Pine Mountain, a huge rock monolith which is one and a half times the size of Uluru although most of its is covered with Cypress pine trees and lichen. There are 180 bird species, including superb lyrebirds, as well there are wombats, kangaroos and black wallabies. All the walks in the park are difficult with Parks Victoria suggesting that even good walkers will average only 1.5-2 km per hour. There are six walks in the park:
1. Bluff Creek Nature Trail - 4 km - 2 hours return - this walk passes beside Bluff Creek and reaches Bluff Falls. There are interpretative panels along the way.
2. The Lookouts Walk - there are two lookouts - Campbells Lookout - 1.4 km - 1 hour return - and Ross Lookout - 6 km - 3-4 hr return. The tracks can be steep but the views are impressive.
3. Pine Mountain Walking Track - there is a short walk to Rocky Knob - 2 km, 1 hour return - and a long, difficult walk - Pine Mountain Summit - 12 km, 7 hours return.
4. Hinces Creek Walking Track - this is a walk to Hinces Saddle. It is 14 km and will take around 7 hours.
5. Mount Burrowa Walking Track - this long walk is 15 km - 10 hours return - to the summit of Mount Burrowa. There is a shorter walk to The Pimple - 3 km - 2hours return. The views from the top of the cliffs are impressive.
There is a downloadable brochure with a good map at http://parkweb.vic.gov.au/__data/assets/pdf_file/0003/314490/Park-note-Burrowa-Pine-Mountain-National-Park.pdf.

Bluff Creek Nature Trail
For those who want only a short bush walk it is possible to park and walk 350 metres to Bluff Creek Falls. In dry weather they are reduced to a trickle but if there has been rain they can be spectacular. The walk (a combination of a wide bush track and a few steps) can be part of longer walks with Bluff Creek being a distance of 2 km (4 km return) and Campbell's Lookout being 700 metres beyond the falls.

* Prior to the arrival of Europeans the area was occupied by the Pallanganmiddang Aborigines.

* The first cattle station was established in 1839. Walwa, 43 km to the north, was the home of Australia's first breed of beef cattle, the Murray Grey, which was widely exported.

* The explorer, Count Paul Edmund Strzelecki, passed through the area on his way to Gippsland in 1840.

* The district was opened up for selection around 1867.

* By the late 1860s a township had emerged to cater to the needs of the small landowners.

* In 1875 a Mr Miller transferred his store from Koetong to Corryong.

* Land sales proceeding in 1882. That year the Court House Hotel opened and an Athenaeum was built.

* The Corryong Courier newspaper was first published in 1894.

* A Presbyterian church was consecrated in 1896.

* The Anglican church was consecrated in 1898.

* In 1914 Jack Riley, credited as the Man from Snowy River, was buried in the local cemetery.

* The town received reticulated water in 1924.

* The first Man from Snowy River festival was held in 1963.

There is information about accommodation and eating in the area at http://www.murrayriver.com.au/corryong. 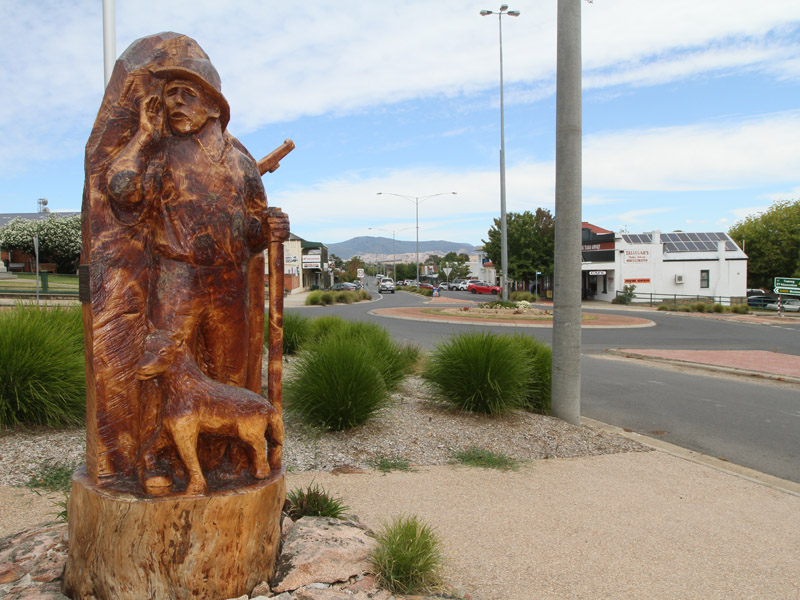 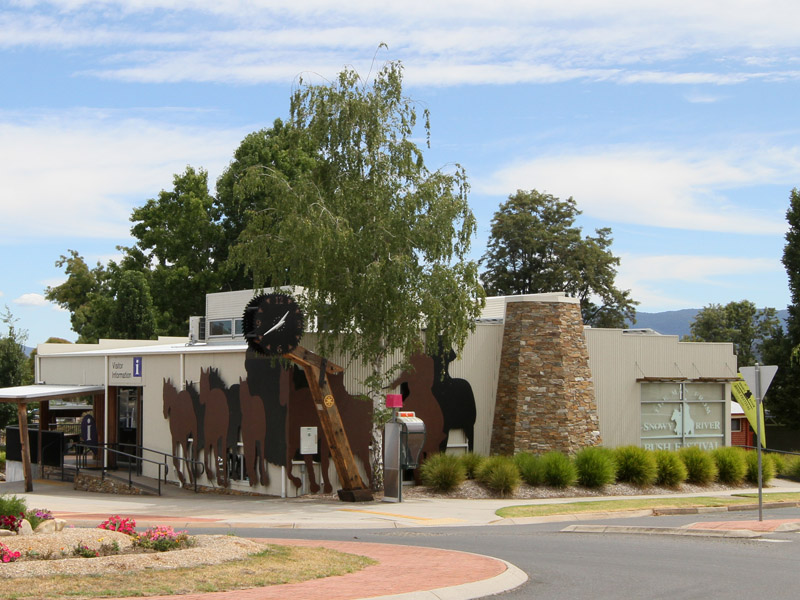 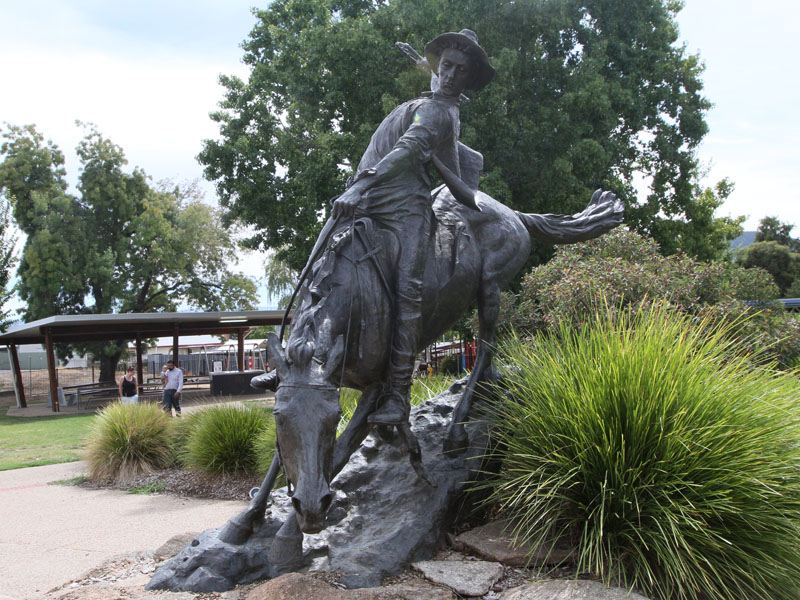 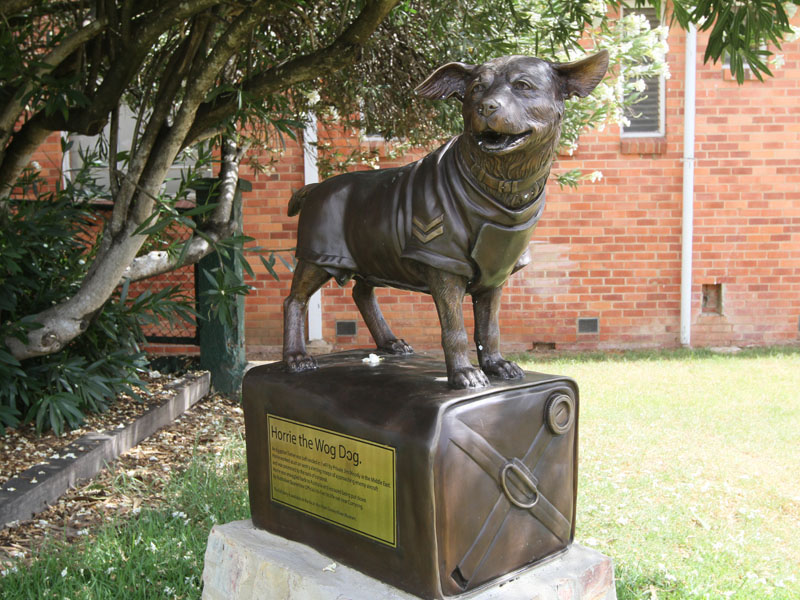 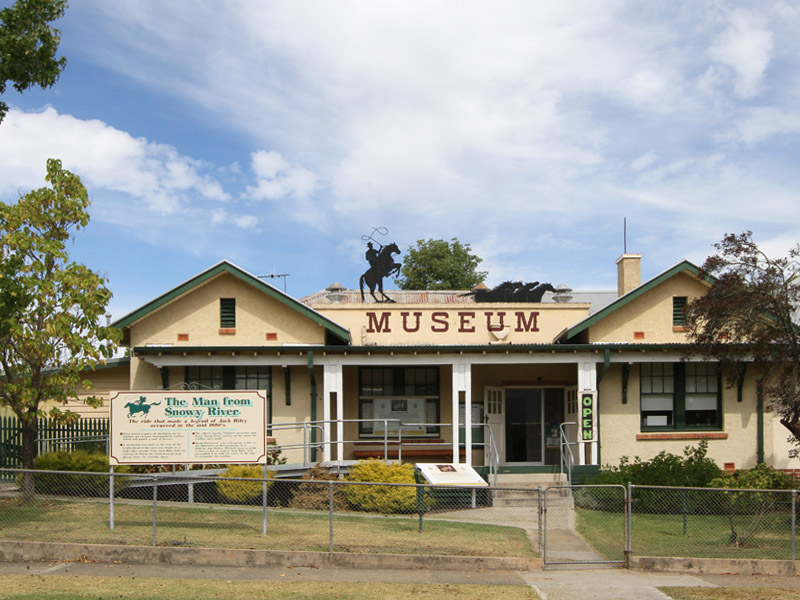 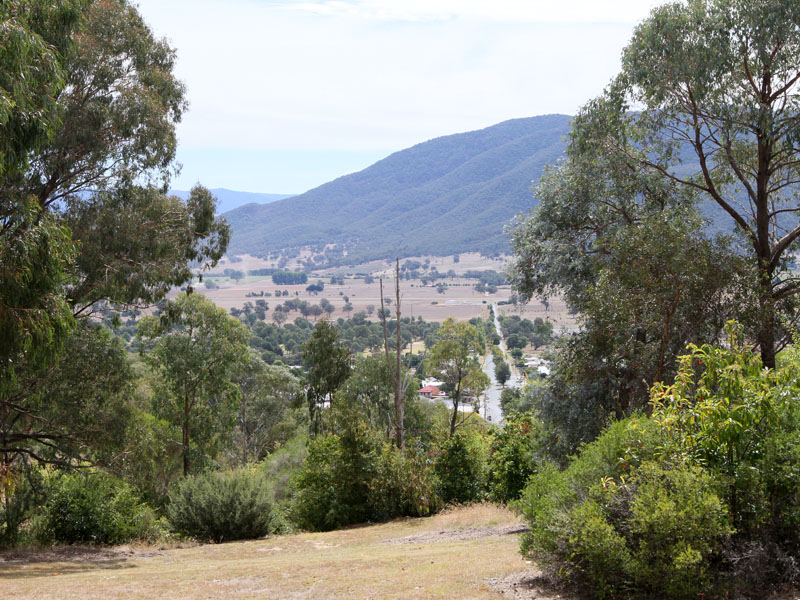 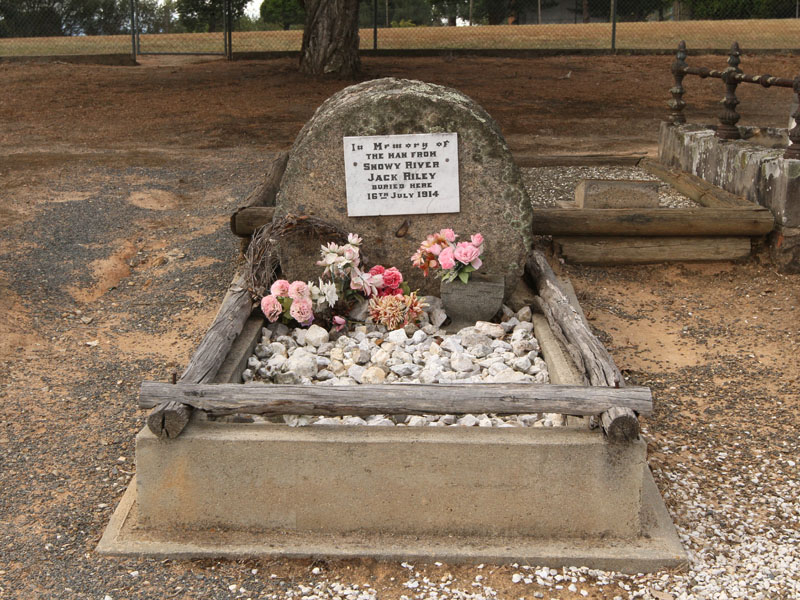 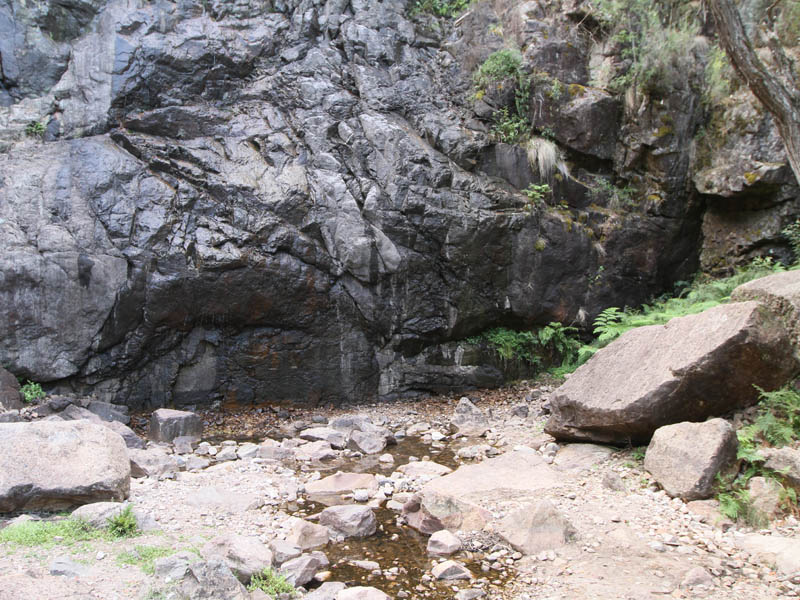