Today Cranbourne is an outer suburb of Greater Melbourne - a place known more for its substantial commercial centre, the Cranbourne Park Shopping Centre and the vibrant High Street. The main appeal of the town lies in its impressive Cranbourne Botanic Gardens, a 363 ha extension of Melbourne's Botanic Gardens which specialises in Australian native species, and the attractive McClelland Sculpture Park and Ballam Park Homestead which lie on the road between Langwarrin and Frankston.

Cranbourne is located 50 km south-east of Melbourne via the M1 and the South Gippsland Highway. It is 50 metres above sea-level.

A townsite was reserved in 1852 and an allotment survey, conducted by Surveyor Foot, occurred in 1856. Surveyor Foot was probably responsible for the name which was inspired either by the Viscount Cranbourne, son of the Marquess of Salisbury, or the village of Cranbourne, near Windsor in Berkshire, England.

Cranbourne Botanic Gardens
Located on the corner of Ballarto Road and Botanic Drive, and covering over 363 ha, the Botanic Gardens are open daily from 9.00 am to 5.00 pm. Entry is free. It is an area of native bushland with untouched areas of heathland, wetlands and woodlands. The Australian Garden is notable for its stands of native flora and impressive sculptures as well as a rock pool waterway. Amongst its fauna and flora are 25 species which are listed as endangered or threatened. The gardens were purchased by the Victorian Government in 1970 and designed specifically to complement the Melbourne Botanic Gardens by specialising in native plants and ecosystems. The official site notes: "Visitors to Cranbourne Gardens can enjoy a natural bushland experience and visit the Australian Garden. Facilities in the bushland include over ten kilometres of walking tracks, six kilometres of cycling tracks, a lookout tower, picturesque shelters, barbecues and picnic tables. There is a range of visitor programs, as well as self-guided walks available throughout the year. The Australian Garden, completed in October 2012, celebrates the beauty and diversity of Australian landscapes and flora and features approximately 170,000 plants from 1,700 plant varieties. Complementing the Garden are a visitor centre, café, gift shop and interpretive displays." Check out https://www.visitfrankston.com/royal-botanic-gardens-cranbourne for more information.

Ballam Park Homestead
Located 8 km at 280 Cranbourne Road, is Ballam Park Homestead, a beautiful French-style two-storey country farmhouse built by Frederick Liardet in 1854. It is furnished with farmhouse materials from the late 19th century - 1875-1880 and features a beautiful garden, heritage listed trees, period museum with costumes and photographs, tea rooms, research centre and the base for the Frankston Historical Society. The grounds have farm machinery, a blacksmith's shop, a horse and buggy display. The Homestead is open for tours on Sundays from noon  - 3.00 pm, tel: 0449 858 316. For more information check out http://www.frankstonhs.org.au.

McClelland Sculpture Park + Gallery
Located 14 km west of Cranbourne at 390 McClelland Drive, Langwarrin,  the McClelland Sculpture Park + Gallery, one of Australia’s leading sculpture parks, is set in 16 ha of bushland and surrounded by lakes and gardens. There are over 100 outdoor sculptures by some of Australia’s leading sculptors. The McClelland Café, with a small but classy menu, overlooks the lake. The Gallery is open Tuesday to Sunday from 10.00 am - 5.00 pm and the cafe is open Tuesday to Sunday from 10.00 am - 4.30 pm, tel: (03) 9789 1671. Check out https://www.mcclellandgallery.com for more information.

* Prior to European settlement the area was occupied by the Boonwurung Aborigines.

* The first white settlers, the Ruffy brothers, arrived in 1836 and settled on the Mayune run. They later opened the Cranbourne Inn.

* Some town allotments were offered for sale in late 1852.

* In 1853 the first meteors from a meteor shower were found in the district.

* An allotment survey occurred in 1856. The Mornington Farmers' Society was founded that year.

* In 1860 a number of meteorites landed in the area. The largest, at 1.5 tonnes, was then considered the world's largest.

* A major cattle market was established at Cranbourne in the 1870s.

* The railway from Melbourne reached the town in 1887.

* A market gardening industry emerged after World War I with the arrival of Italian immigrants.

* By 1986 the population had reached 14,005. This occurred because of massive suburban development in the area.

There is no dedicated website for Cranbourne but the Frankston site has information about the district. Check out https://www.visitfrankston.com. 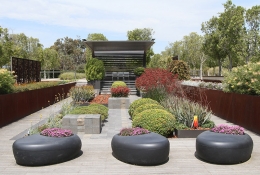 A section of the Cranbourne Botanic Gardens 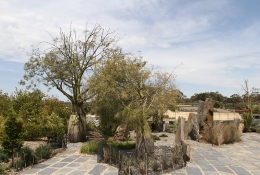 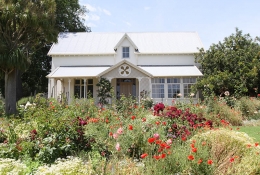 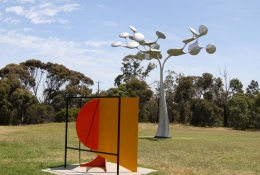 Sculptures in the grounds surrounding the McClelland Sculpture Park 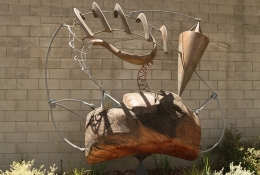