It is one of the strange idiosyncrasies of Australia that a town in the heart of northern Tasmania should be named after a battle between the English and French which occurred in 1346. It is even stranger that the town, rather than celebrate its exotic nomenclature, should opt for a Big Trout and talk about its "troutification". But then Cressy does proudly describe itself as the "Gateway to Trout Fishing Paradise". This is rich, agricultural land. It was productive when the first settlers arrived in the 1820s and it remains rich with its production of poppies and its herds of cattle.

Cressy is located 188 km north of Hobart and 35 km south-west of Launceston.

Cressy was named by Bartholomew Boyle Thomas, an early settler. One version says Thomas's birthday was on the anniversary of the Battle of Crecy (an important battle in the Hundred Years War between England and France), on 26 August, 1346. Another claims that an ancestor of Thomas was created Knight Banneret for his bravery during the battle. Thomas was a representative of an English company, the New South Wales and Van Diemen's Land Establishment, which had been granted 20,000 acres in the district.

Big Trout
Designed by Bruno Barcodi, who describes himself as an "object maker" from Launceston, the Big Trout has a reasonable claim to be one of Australia's most recent  "big things". The aim of the object, which stands outside the town's recently upgraded public toilets, was to draw attention to the idea that Cressy, by its own publicity, is the "Gateway to Trout Fishing Paradise".

Trooper Henry Mitchell Black Memorial
It is heartening, and a comment on the smallness and closeness of Cressy community in 1900, that this memorial does not celebrate some extraordinary act of bravery in battle but rather the loss of a young local who was only twenty and who died of enteric fever in South Africa during the Boer War.

Panshanger
Located only 3 km east of Cressy (but the Macquarie River is in the way and it is actually 16 km via Powranna Road) Panshanger was built by Joseph Archer in 1831 and is characterised by a glorious garden and a Classical Georgian house with a Tuscan portico. It is now recognised as one of the finest example of Greek Revival architecture in Australia. The website notes: "The acres of parks and gardens feature stable yards, a water tower, horse-operated pump house, remains of a cider press, and a gardener’s cottage. Hawthorn hedges, oaks, elms, laurels, lindens, maritime pines and sweeping lawns all create an atmosphere of serenity from an earlier era. After two generations of Archers the property was sold in 1908 to Thomas Mills, a gold miner from Charters Towers in Queensland. It was purchased as a wedding gift for his son, Charles. Today this six-thousand acre property is still run by the Mills family, producing a range of irrigated crops, sheep and cattle."  It is currently operating as a bed and breakfast. Check out http://www.panshanger.com.au/index.htm

Richmond Hill
Another historic house in the district is 'Richmond Hill' at 1097 Cressy Road and only 1.3 km north-east of Cressy. It is an attractive single storey brick Georgian house which dates from 1823. Its location on the Macquarie River, its 12 panel windows and six panel front door, all contribute to an air of gracefulness and gentility. It was sold, along with 67.4 ha, in 2012 with the estate agent describing the private property as "One of Tasmania's best presented Georgian Country Homesteads surrounded by magnificent gardens and mature English Parkland, on the banks of the Macquarie River with superb views to Ben Lomond and panoramic 360° views of the Northern Midlands. This elegant home features four bedrooms, three bathrooms, formal lounge and dining and spacious family area, tall windows, high ceilings, modern kitchen and central heating. In 2001 the C1823 two storey Granary was converted into a versatile 3 bedroom open plan accommodation/office complex of the highest standard." It is not open to the public and cannot be seen from the road. It is down a long, straight driveway.

* Prior to the arrival of Europeans the area around Cressy was occupied by members of the Tyerrnotepanner Aboriginal language group.

* In 1826 the area was settled by Batholomew Thomas a representative of an English company, the New South Wales and Van Diemen's Land Establishment, which had been granted 20,000 acres in the district.

* The town's first hotel, the Cressy Hotel built by William Brumby, was opened in 1845.

* The town was officially recognised in 1848.

* The land owned by the New South Wales and Van Diemen's Land Establishment (which became known as the Cressy Establishment) developed into a substantial wheat farm and prospered until it was sold in 1856.

* In 1937 the Cressy Research and Development Station was established.

* In the 1970s the Cressy-Longford Irrigation Scheme was developed.

* Today the area's rich soils are ideal for the growing of poppies and raising of fine cattle.

There is a local website with useful information about the district. Check out http://www.cressytasmania.com/ 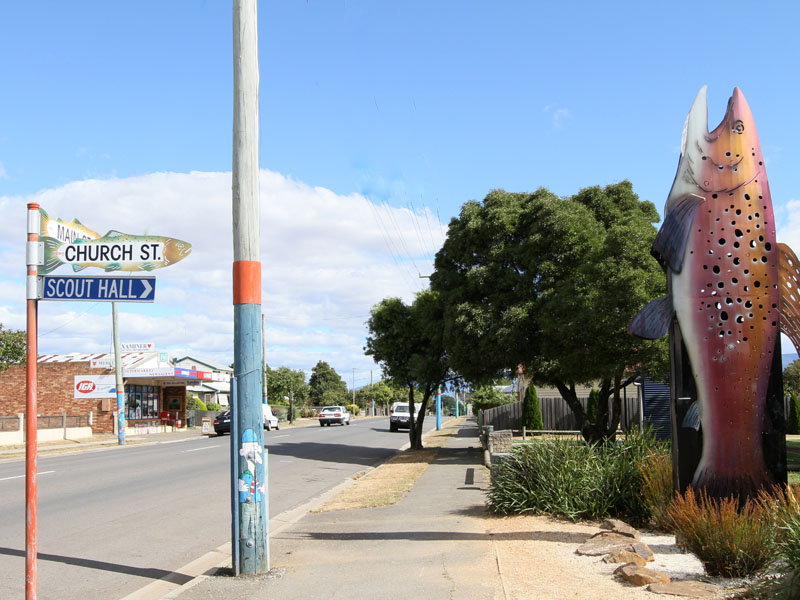