Cudal is located 297 km north-west of Sydney via the Great Western Highway. It is 40 km west of Orange.

It is believed that Cudal is a Wiradjuri word meaning 'flat' although a range of other definitions have been offered including "foggy waterhole', "land basin" and "place of many trees".

E W Corden Store now the Cabonne Food, Wine and Cultural Centre
Located prominently in the main street, and now known as the Cabonne Food, Wine and Cultural Centre, this is a rare opportunity to step back in time and experience rural life as it was over 50 years ago. There is a fascinating booklet, A History of the E W Cordon Store, available for sale. It has excellent photographs of the original departments in the store - the Laces and Haberdashery Department, the Mens, Boys and Juveniles Clothing Department, the Grocery and Provision Department, the Boot and Shoe Department and the Ironmongery, Saddlery and Harness Department. It is open Friday, Saturday and Sunday from 10.00 am - 4.00 pm. Tel: (02) 6364 2038 or cfwcc@bigpond.com.

The E W Corden Store Flying Fox Change Dispenser
There are, as far as I can determine, only five remaining Flying Fox Change Dispensers left in Australia. There is one in the museum in Charters Towers; a working one in Gayndah, Queensland; another at Glenelg in South Australia and one in Sheffield in Tasmania ... and this one in the Cabonne Food, Wine and Cultural Centre. There was a time, back after World War II, when they were commonplace. In essence as is explained in the fascinating How Shops Show Their Age (see http://www.environment.nsw.gov.au/resources/heritagebranch/heritage/alotinstorech4.pdf): "Aerial cash systems, also called ‘flying foxes’, were once common in stores across Australia. With a system of aerial wires to transfer cash and dockets between counter and cashier, assistants could devote themselves to serving customers and they no longer needed to waste precious selling time leaving the counter to visit the cashier’s office. This system also gave the store owner the advantage of having greater control over the movement and security of cash transactions." The one in Cudal still works although you have to climb up to the Mezzanine Floor to send the flying fox back to the main floor.

Cobb & Co Heritage Trail
In 2004 the legendary coaching company, Cobb & Co, celebrated the 150th anniversary of its first journey and the 80th anniversary of its last. The company's profound contribution to Australia's development was celebrated with the establishment of a heritage trail.
Cobb & Co's origins lay in the goldrushes of the early 1850s. Bathurst was central. It became the site of the company's headquarters in 1862, under the management of local boy, James Rutherford. The first coach arrived at Bathurst, from Victoria, to the applause of a large fanfare, and with Rutherford at the reins. The company's principal coach construction factory operated behind the Black Bull Inn until 1881 at the corner of Bentinck and Howick Streets. At its peak Cobb & Co coaches were travelling 28,000 miles (44,800 km) a week. They had a total of 30,000 horses and were harnessing 6,000 horses every day. There was a total of 7,000 miles (11, 265 km) of regular routes throughout Australia and the web of routes from Bathurst to Bourke were part of 2,000 miles (3,218km) of coach routes which stretched from southern Victoria to the Gulf of Carpentaria and criss-crossed eastern Australia.
The Cobb & Co Heritage Trail booklet explains that "known as 'whips', or Jehus, the drivers were Australia's heroes of the 19 th century. They had to contend with heat, dust, bush fires, flies, mosquitoes, rain, fog, bog, snow, snakes, kangaroos, bushrangers, difficult passengers and post office schedules which demanded the mail be on time or a heavy fine would ensue . . . Horses were changed every 16 miles (25.6 km) or so at changing stations, sometimes combined with bush shanties or inns where the passengers could get a meal, drink, or a few hours sleep."

Cobb & Co At Cudal
The excellent Cudal Celebrates: Centenary of Federation 1901-2001 has an extract from Notes of a Journey Westward from The Sydney Mail, October 5, 1878: "Taking a seat in Cobb's coach one morning before daylight, I left the picturesque and lively town of Orange for Cudal, a little village about 25 miles away, on the road to Forbes - with a feeling that, in leaving the railway and the town, I was leaving the world and civilisation behind my back ... The road was dreadfully rough, and the coach pitched about like a ship on a stormy sea. It was very heavily laden, and we were every moment afraid of an accident. At length, coming suddenly at full force against a stump, which could not be avoided owing to a horse stumbling, crash went the pole, splitting from end to end. The mending of this delayed us some time, but the driver (who is an excellent good fellow, and known under the name of Long Jim) took the mishap in a cheerful spirit, never uttering an improper word at the delay ... The road between Orange and Forbes is, at Cudal, in a most wretched condition, and I suppose it is not worse than many others: I have seen a team of seventeen powerful horses fail to stir a wagon laden with merchandise, and I am informed that the other day so tremendous a power as that of thirty oxen was not able to move a similar load."

An Image of Cudal in 1878
The story goes on to describe Cudal: "And what is Cudal, about which so little appears, to be known? It is the young beginning of what probably will become a good sized town. It contains three public houses, three stores, two smiths shops, a Public School, a Post Office and a few residences. There is also a mill, constructed of basalt, in course of erection by Mr Landauer."

* Prior to white settlement the Wiradjuri people inhabited the area.

* In 1835 Major Thomas Mitchell, exploring the area, passed near the present site of Cudal.

* In 1845 Mitchell explored the area for a second time.

* When gold was discovered in Forbes in 1861 Cudal became important as a place to cross the Boree Creek.

* By 1861 Cudal was on the main road from Orange to the Forbes goldfields.

* In 1875 Caleb Parker opened the Commercial Exchange Store in the main street.

* By 1876 the town had its first school - a slab and shingle structure. That year also saw the construction of the Church of England.

* The local Catholic Church was consecrated in 1880.

* In 1881 a mounted constable was stationed at Cudal.

* The local School of Arts was opened by Sir Henry Parkes in 1881.

* By 1882 the town had five stores, three hotels and two churches.

* By 1890 the Commercial Banking Company of Sydney was operating in the main street.

* 1912 saw the establishment of the Municipality of Boree.

* In 1923 the Methodist Church was consecrated.

* In 1946 His Royal Highness the Duke of Gloucester opened the local Scout Hall.

* In 2000 the Cabonne Winery opened and the local Dairy closed.

There is information available at the Carbonne Food, Wine and Cultural Centre in the main street. Information is also available at Molong's Visitor Information Centre, the Yarn Market Craft Cottage, 79 Bank Street, Molong, tel: 02) 6366 8260. It is open from 10.00 am - 4.30 pm.

There is useful information at http://www.orange-nsw.com/Cudal.html. 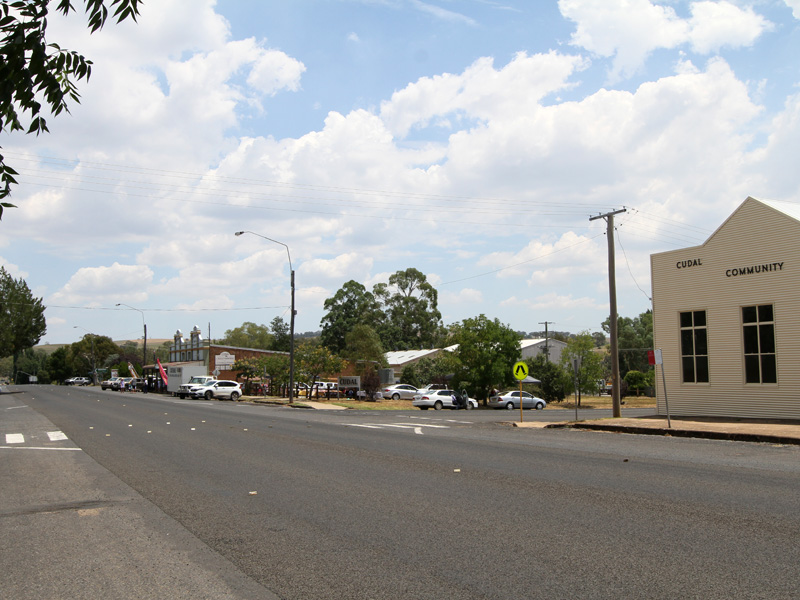 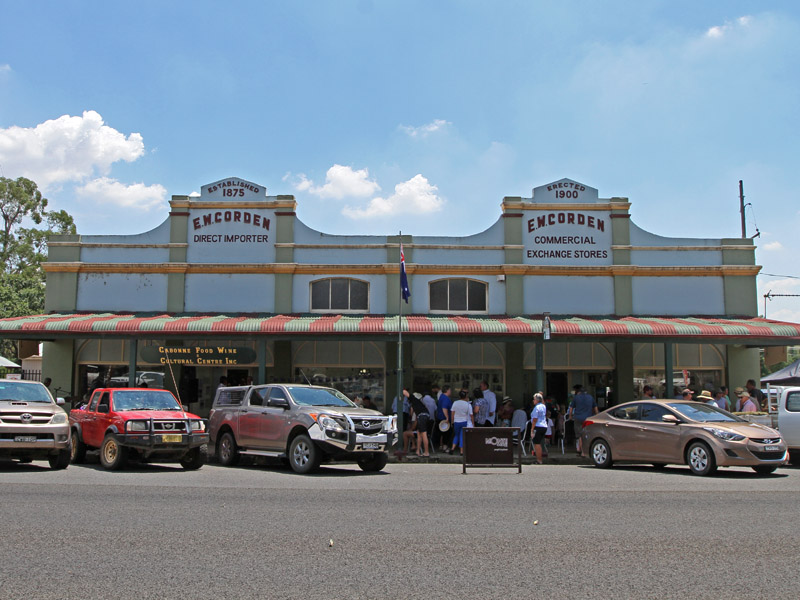 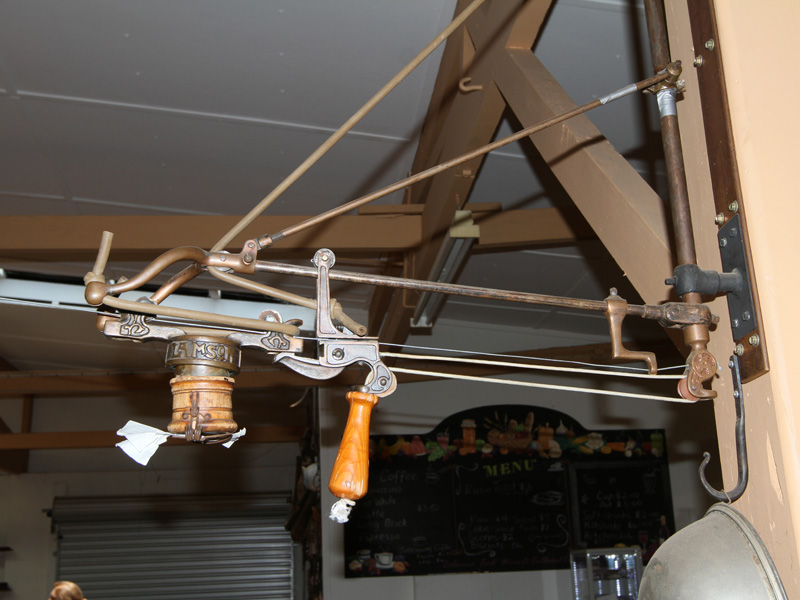 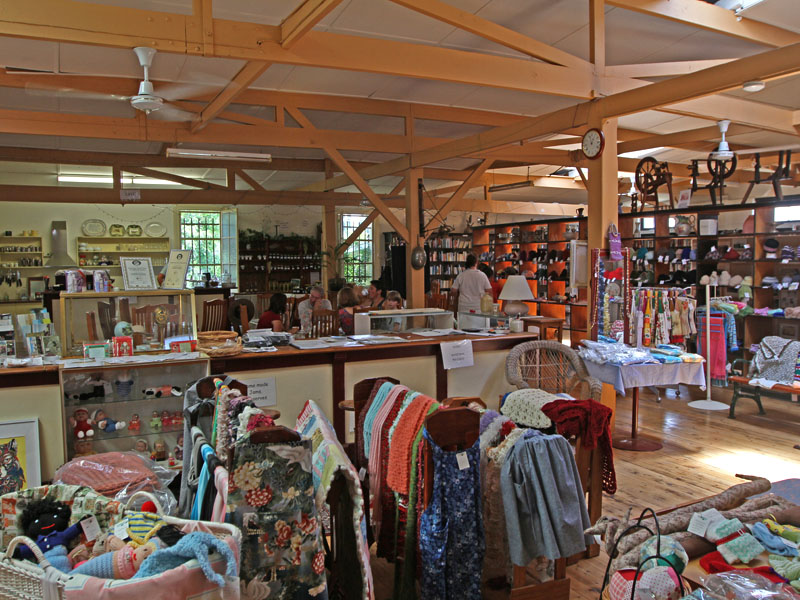 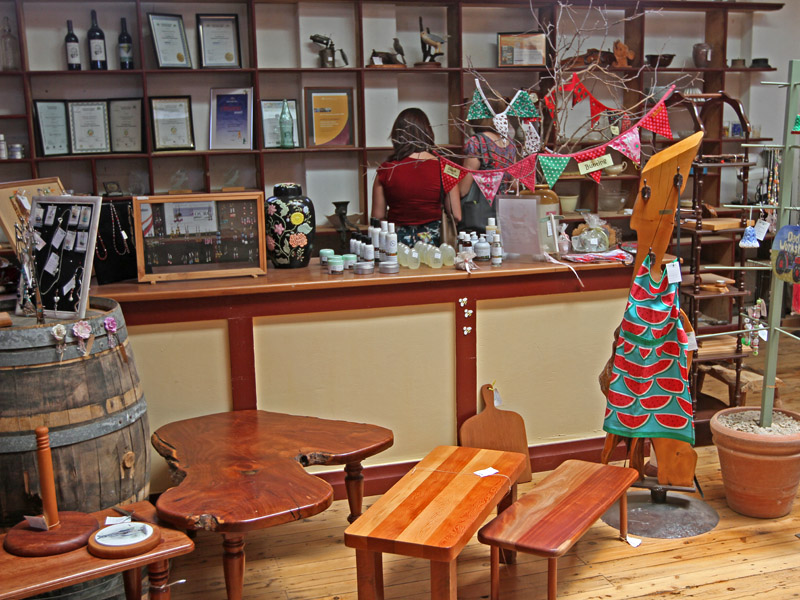