Darlington remains one of the few locations in the Perth hills with an early 20th century village ambience. Its main claim to fame is that in May, 1922 the English novelist, D. H. Lawrence, stayed there during his visit to Perth.

Darlington is located on 28 km north-east of Perth in the Perth Hills.

When, in 1883, Dr Alfred Waylen purchased land in the district he named his property 'Darlington'. Six years later, in 1889, a small railway station was built and it was named Darlington after Waylen's property.

Leithdale - Molly Skinner's Guesthouse
Leithdale was a popular guest house in the 1920s. At that time it was run by two nurses, Mollie Skinner and Nellie Beakbane. Located at 5-7 Lukin Avenue it was where the great English novelist,  D. H. Lawrence, and his wife Frieda, stayed between 6-18 May, 1922.

Lawrence has left us a fascinating description of Darlington in the 1920s: "We are here about 16 miles out of Perth - bush all around - marvellous air, marvellous sun and sky - strange, vast, empty country -  hoary unending 'bush' with a pre-primaeval ghost in it - apples ripe and good, also pears. And we could have a nice little bungalow - but - but - BUT - Well, it's always an anticlimax of huts. - I just don't want to stay, that's all. It is so democratic, it feels to me infradig. In so free a land, it is humiliating to keep house and cook still another mutton chop."

The importance of this footnote to the life of D. H. Lawrence is that, with Mollie Skinner as his credited co-author, he wrote The Boy in the Bush. It was published in 1924 and was the only novel Lawrence co-authored. It is accurate to say that Molly Skinner wrote a draft manuscript titled The House of Ellis which some time during the next year Lawrence re-wrote and re-titled The Boy in the Bush. Most critics and academics concede that, while it is not a major work, it is essentially a Lawrence novel and as such belongs in any serious collection of his works.

The Heritage Council of Western Australia in its Register of Heritage Places notes that: "Leithdale, a single storey brick and iron residence, in the Federation Queen Anne style together with a stone dairy, has cultural heritage significance for the following reasons: the place is an excellent and relatively intact example of a Federation Queen Anne house; the place was the home of Mollie Skinner, a Western Australian author of the 1920s – 1940s, and in 1922 hosted D.H. Lawrence, a prominent English novelist, who assisted Ms Skinner with her writing while staying at the place and collaborated with her to write The Boy in the Bush; the place was constructed for John Allpike, who developed the property as a winery in the 1890s and was one of Darlington’s earliest residents; and, the place represents the development of Darlington from an agricultural area to a popular holiday area during the 1920s and 1930s.

"The new extensions on the eastern side of the house, together with the below ground pool and the new brick buildings to the north-east of the house are all considered to have little significance." It was permanently listed in 2006. It is now a private home and not open to the public.

Railway Reserves Heritage Trail
The 59 km trail runs from Bellevue in the west to Woorooloo in the east and retraces a section of the old Eastern Railway that formerly linked Fremantle to York. The railway was closed in 1966 and subsequently was turned into a Heritage Trail. From Darlington it can be enjoyed by walking or on bicycle either downhill to Boya (2.1 km) or slightly uphill to Glen Forrest (2.5 km). The trail passes the old Darlington Railway Station (1903) and travels through deep cuttings which were blasted out with dynamite and blasting powder. It is designed for pleasant leisure activities including walking, jogging, cycling. For more details check out http://www.railwayreserves.com.au/

Kalamunda National Park
Kalamunda National Park is a 375 ha national park to the south of Darlington which has a number of excellent walking trails. It is noted for the diversity of its flora with woodlands of "jarrah, marri, wandoo and butter gum. Butter gum is an uncommon species with a powdery bark; because of its white bark it is sometimes called Darling Range ghost gum. The heath plants of the understorey flower profusely in late winter and spring. The park is home to some extremely rare plant species which exist nowhere else." Check out http://www.perthhills.com.au/discover.html, tel: (08) 9290 6100

Beelu National Park
Beelu National Park cover 3,000 ha of forest east of Darlington. There are a number of excellent walking trails which offer opportunities for bird watching and views over Mundaring Weir and Lake CY O'Connor. It incorporates Fred Jacoby Park which is noted for its huge 140-year-old English oak trees. For more information check out http://parks.dpaw.wa.gov.au/park/beelu or tel: (08) 9295 2244.

* By 1840 a track had been constructed by timber cutters who made their way across the Darling Ranges to York.

* In 1889 a railway station, named Darlington, was constructed.

* After World War I Darlington became a "hill station" during the summer months. A number of guest houses were established and people retreated from the coastal plain.

* In May, 1922 D. H. Lawrence and his wife stayed at a guest houses named Leithdale which was run by Mollie Skinner and Nellie Beakbane and located at 5-7 Lukin Avenue.

* In 1924 the most famous book to be written in Darlington, D. H. Lawrence and Mollie Skinner's The Boy in the Bush was published.

* By the l930s, the village had a general store, tea rooms, a Post Office, a butcher's shop, several churches and a primary school.

* Today it is both a quiet commuter zone and a place where Perth people retreat during the summer months. 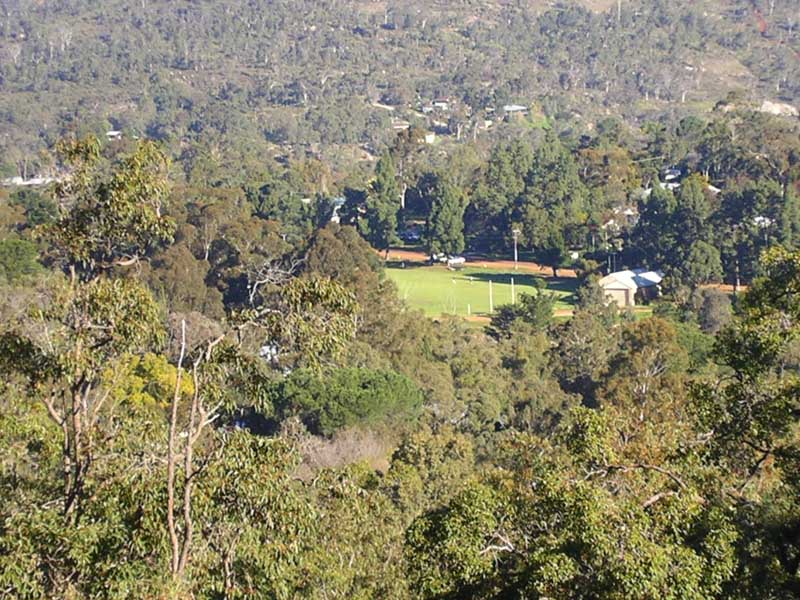 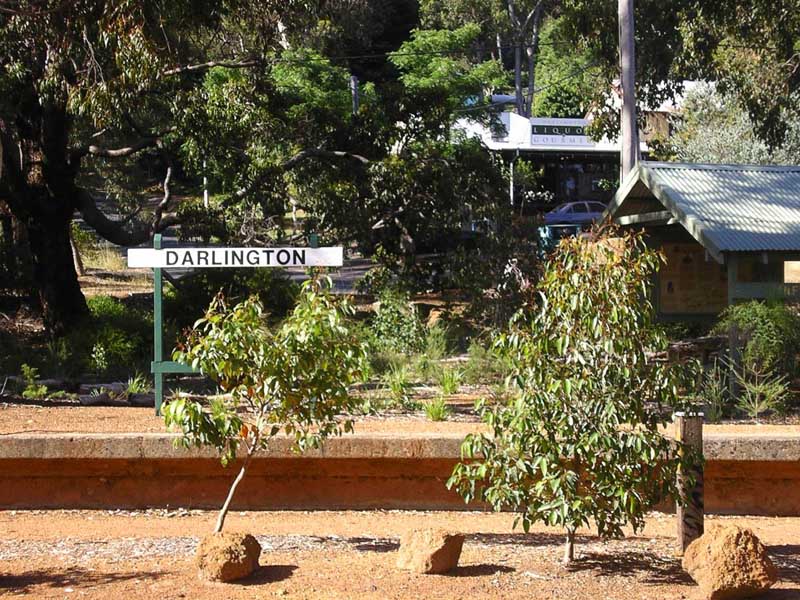 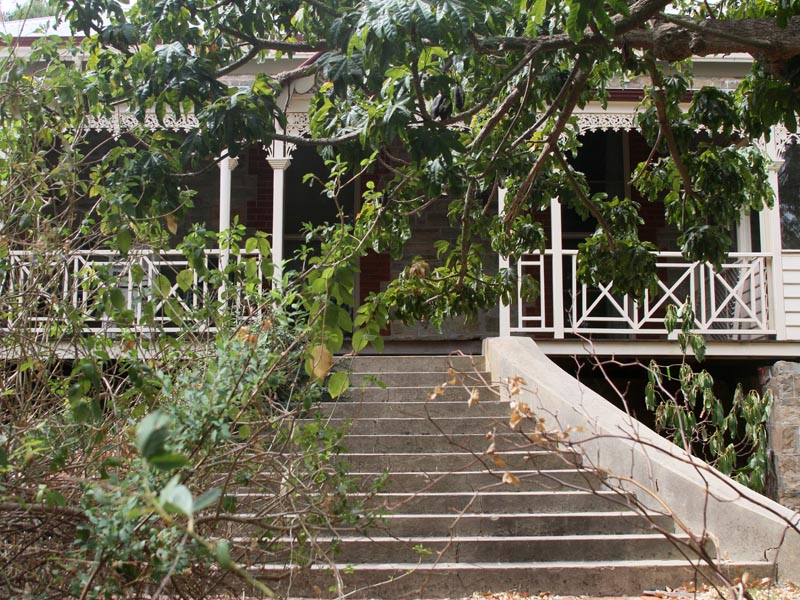 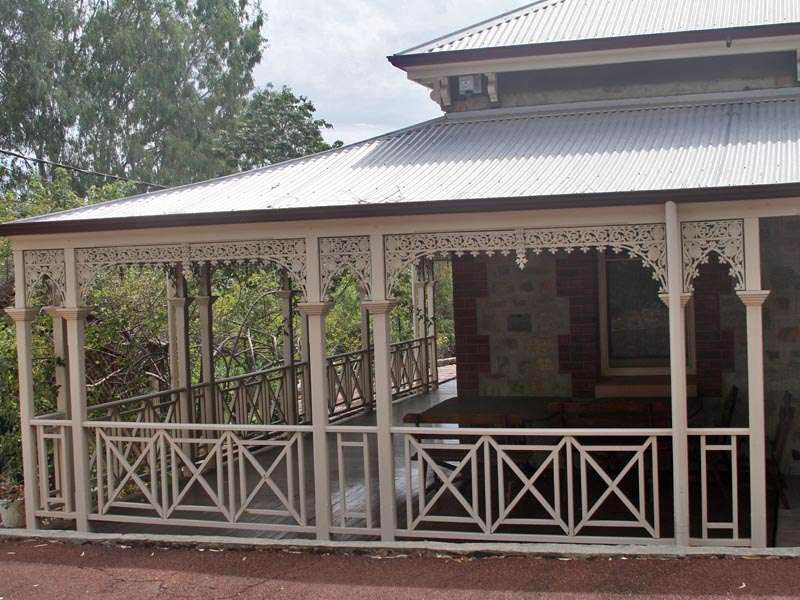