Rural service town which describes itself as 'Town of Windmills ... Home of the Coo-ees'

Gilgandra is a small rural service centre located on the Castlereagh River at the junction of the Newell, Oxley and Castlereagh Highways. It services a mixed farming district notable for its grain cropping, sheep and cattle. Smaller rural industries involving pigs, poultry, aquaculture, ostriches, emus, deer, olives and buffaloes also exist in the area. The town's greatest "claim to fame" is the Coo-ee March in 1915 when patriotic men from the community marched nearly 500 km to Sydney during World War I to draw attention to the need for recruitment. They started with 35 recruits and had over 350 by the time they reached Sydney. It was the first of many similar long distance marches and will be celebrated by the town in 2015.

Gilgandra is located 436 km north-west of Sydney and 280 m above sea-level.

The Coo-ee Heritage & Visitor Centre
The obvious starting point for those wanting to explore the town is the handsome, new Coo-ee Heritage & Visitor Centre located in Coo-ee Park on the Newell Highway. They not only have maps and brochures about the attractions of the town but the centre now includes an outstanding and comprehensive display chronicling, mainly through photographs and newspaper articles, the story of the Coo-ee March. Titled "First Stop Berlin" it records the time in 1915 when 35 men set off on a six-week, 500-km trek to Sydney as part of the first recruiting march of World War I. The Heritage Centre also includes an exhibition on the early Aboriginal history of the area and information about the history of the town and the district. The Centre is open seven days from 9.00 am to 5.00 pm, tel: (02) 6817 8700.

The Windmills in the Park
There were 300 windmills in operation in the district by the 1950s, earning Gilgandra the title 'The Windmill Town'. They were used to pump up sub-artesian water until 1966. They were vital to the reliable water supply of the town and the surrounding properties. Today a number of the original windmills (it is surprising how many specific makes and models were available) are located on a very pleasant walk from the Coo-ee Heritage & Visitor Centre along the banks of the Castlereagh River. It is worth noting that the Castlereagh River at this point is an upside down river with the water flowing under the sand. Only when it is in flood does it become a conventional river.

Rural Museum
Just a short walk from the Visitor Centre is Gilgandra's huge Rural Museum which contains an extensive collection of rural equipment including old coaches, shearing equipment, ploughs and tractors. It specialises in Australian-invented rural machinery of yesteryear. It is open from 9.00 am to 4.00 pm daily, tel: (02) 6847 0806.

Gilgandra Observatory
The Gilgandra Observatory, which has operated since 1975, is located in Willie Street, just off the Newell Hwy. With a main telescope - a 31 cm Newtonian Reflector - it is possible to view (weather permitting) the rings of Saturn, sun spots, the moons and Jupiter, Mars and Orions Belt. There are also astronomical displays, sun dials as well as rocks, fossils, petrified wood and native flora. The centre is open from 7.00 pm to 10.00 pm from Wednesday to Saturday. During daylight saving the nightly hours are 8.00 pm to 11.00 pm, tel: (02) 6847 0776. For more information check http://www.gilobs.com.au. Recently it has been closed. Check before visiting it.

Flora Reserve
The Gilgandra Native Flora Reserve is 8.5 ha of remnant bushland which is particularly impressive during spring when the local wildflowers are in bloom. It is located north-east of the town on the Oxley Highway - drive 8 km and turn right into Flora Reserve Road. Admission is free and it is open every day.

It is a story of the licensees of the Breelong Inn, John and Sarah Mawbey, who employed a number of Aboriginal workers, including Jimmy Governor and Jacky Underwood.

Jimmy Governor was a part-Aborigine who had worked as a police tracker before marrying a 16-year-old white woman. He had been contracted by the Mawbeys to build a fence. Contemporary records show that Governor was hard working. He  wanted to succeed in white society.

Initially Governor was on good terms with his employers but things took an ugly turn when Governor's wife, who worked in the Mawbey house, was belittled for marrying an Aborigine by Mrs Mawbey and Helena Kurz, the local schoolteacher who was living with the Mawbeys.

Furious at the humiliation, Jimmy and Jacky Underwood on 20 July, 1900 confronted the women. Jimmy claimed that Mrs Mawbey called him "black rubbish" and told him that he should be shot for marrying a white woman. No one will ever know the precise details. What is known is that Governor and Underwood were so incensed they murdered Sarah Mawbey, three of her daughters and Helena Kurz with clubs and a tomahawk. In the melee Sarah Mawbey's sister was badly injured.

Jimmy, his brother Joe, and Jacky Underwood then went on a three-month, 3,200 km rampage, during which they murdered five more people, wounded another five, committed seven armed hold-ups and robbed 33 homes.

A massive manhunt involving hundreds of policemen and trackers and 2,000 volunteers failed to capture the men who ridiculed their pursuers by advertising their whereabouts and sending satiric letters to the police.

By October, 1900 a £1000 reward for their capture had been posted and later that same month they were outlawed, meaning they could be shot on sight. By the end of October Jacky Underwood had been captured; Joe Governor had been shot and killed near Singleton; and Jimmy was eventually captured by a group of farmers near Wingham two weeks after being shot in the mouth. Jimmy and Jacky were hung in January, 1901. In his last days Jimmy sang native songs, read the Bible and blamed his wife.

The sites on the old Mawbey estate have all been demolished and are now on private property. Sarah Mawbey and her three daughters are buried together in Gilgandra cemetery. There is a large stone monument behind a wire fence in the Church of England section. Helen Kurz's grave stands in the cemetery at Girilambone.

The Warrumbungles north of Gilgandra are an ideal place for stargazing with a combination of relatively high altitude, low humidity, a non-turbulent atmosphere, clean air and an average of 70% clear night skies. Never have the stars looked so bright in the night sky.

* Prior to European settlement the area around Gilgandra was inhabited by members of the Wiradjuri Aboriginal language group.

* The first squatters moved into the district during the 1830s.

* By 1866 the town's first building, the Bushman's Arms Hotel, had been licensed.

* In 1884 a bridge over the Castlereagh River was completed and the local Court House heard its first case.

* Gilgandra was officially proclaimed a town in 1888.

* In 1899 the railway from Dubbo reached the town.

* On 20 August, 1900 at Breelong, 18 km south-east of Gilgandra, Jimmy and Joe Governor and Jacky Underwood murdered Sarah Mawbey, three of her children and Helena Kurz, the local schoolteacher. They were eventually captured and hanged.

* In 1915 35 local men set off from Gilgandra on the first recruiting march of World War I. They walked 500 km to Sydney in six weeks. The event sparked seven other such marches from rural centres.

* After the war Gilgandra was awarded £1200 by St Ambrose Parish of Bournemouth in England as it was considered to have made the greatest war effort of all the towns in the British Empire. The gift had to be used to construct an Anglican Church bearing the name of the Bournemouth parish. St Ambrose Anglican Church was duly dedicated in 1922.

* By the 1950s there were over 300 windmills in the area. All were pumping water to sustain agriculture in the area.

* Today Gilgandra promotes itself as the 'Home of the Coo-ees'.

There is a useful local website - http://www.gilgandra.nsw.gov.au/community  - which has sections on Tourism and the area's Cultural Heritage. 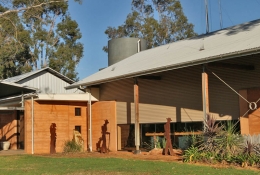 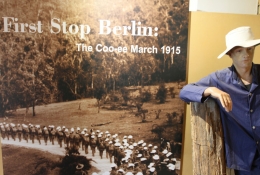 The Coo-ee exhibition at the Coo-ee Heritage Centre with the famous photograph of the marchers passing through Lithgow. 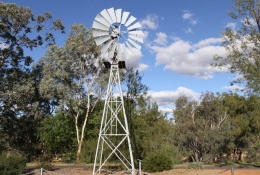 A Horwood Bagshaw K. Windmill on the town's Windmill Walk.

St Ambrose Anglican Church, built with £1200 from St Ambrose Parish, Bournemouth, England. They considered Gilgandra had made the greatest war effort of all the towns in the British Empire 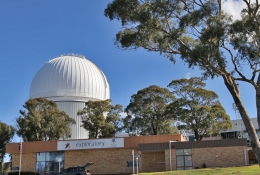 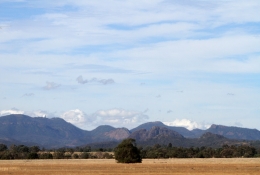 Siding Spring Observatory and the Warrumbungles from Tooraweenah.