Historic town on the road to the goldfields, now the gateway to the Macedon Ranges

Gisborne is an attractive and small rural settlement which, because it was bypassed by the Calder Highway, has become the quiet and peaceful entrance to the Macedon Ranges. Gisborne was originally an agricultural district but it is now principally a commuter suburb and day tripper destination in easy reach of Melbourne.

Gisborne is located 56 km north-west of Melbourne via the M79. It is 610 metres above sea-level.

Gisborne was surveyed in 1851 and named after Henry Fyshe Gisborne, the Victorian Crown Lands Commissioner between 1839-1840.

Court House and Lockup
Located at 2 Hamilton St this two-storey stuccoed Classical Revival structure features single-storey wings, a timber veranda and hipped roof. It is home to the Gisborne and Mount Macedon Districts Historical Society and open to the public every Wednesday from 10.00 am to 4.00 pm. Check out https://www.gisbornemountmacedon.org.au or tel: (03) 5428 1450. Of particular interest is the 1858 lockup which is behind the old Court House. It has an automated sound and light diorama which comes on when you enter the lockup and is open daily from 10.00 am - 2.00 pm and often for longer.

Former Corner Store
Located on the corner of Hamilton and Aitken Streets is a substantial two-storey brick structure with bluestone foundations and a hipped slate roof is a fine surviving example of a traditional Victorian country store, built c.1860. Check out https://vhd.heritagecouncil.vic.gov.au/places/68804 for more information.

Macedon House
Located at 1 Kilmore Road, Macedon House is a single-storey stuccoed structure with the oldest section being erected in 1847 for Elizabeth and Thomas Gordon who operated it as the Mount Macedon Hotel. It was sold in 2018 for $1.36 million with the buyer planning to restore it to its original appearance. In 2019 it was still a rather sad shell waiting for restoration. It  has been described by the Victorian Heritage Database as "a single storey, rendered, bluestone building with a hardwood-framed roof covered by original shingles beneath a later corrugated iron roof. The roof framing construction is of an unusual dragon beam style. The building is H-shaped in plan with projecting hipped bays. The front bays flank a recessed verandah with corrugated iron roof. The lacework on the timber and iron verandah dates from a later period. At the rear a timber infill section was constructed at an unknown date. Internally most of the original partition walls have been removed. A suspended ceiling was added below the original lathe and plaster finish and the floor has been replaced by a concrete slab. The chimneys, sash widows and timber mouldings survive from various periods." For more details check out https://vhd.heritagecouncil.vic.gov.au/places/14047.

Botanic Gardens and Walking Track
The town's Botanic Gardens are situated on the northern bank of Jacksons Creek and can be accessed from Robertson Street or Station Road. They feature a New Zealand garden which is a result of Gisborne's relationship to its sister city Gisborne in New Zealand. In 1992 New Zealand flax was planted in the south-eastern corner and today there are many examples of New Zealand plants in the gardens. The Macedon Ranges Shire Council site (see https://www.mrsc.vic.gov.au/See-Do/Parks-Gardens-Reserves/Botanic-Gardens#section-2) records: "The Maori taonga or treasure called ‘Tanemahuta’ or Lord of the Forest was installed in 1996. He was carved by Derek Lardelli in Gisborne, New Zealand by a piece of whalebone and greenstone representing the water and the land of Aotearoa (New Zealand). Unfortunately the head of the ‘Tanemahuta’ was stolen around the 12 September 2002. Its replacement was created by Simon Lardelli who is the nephew of Derek. Council is reviewing options with regard to its future. In December 1999, a sculpture entitled ‘Raincatcher’ by sculptor Anton Hasell was installed in the Australian section of the Gardens in New Zealand. ‘Raincatcher’ was a way of saying Thank you for Tanemahuta." There is also a cycling/walking track which runs from Station Road (behind the Aquatic Centre) along the southern bank of Jacksons Creek.

The Kangaroos at Gisborne Golf Club
There is nothing kangaroos like more than the rich, fertile fairways of a well-watered golf course. The Gisborne golf course has attracted over 200 Eastern Grey Kangaroos who consider the course their home. The enterprising club, rather than get rid of the animals, has created a unique kangaroo viewing experience where tourists can purchase a 30 minute tour via the club's website at https://www.gisbornegolf.com.au/cms/kangaroo-tours/information-booking. Tours operate Wednesday, Thursday, Saturday and Sunday from 10.00 am - 4.00 pm. Tours are taken in a six seat golf buggy and last around 30 minutes.

Dromkeen Historical Homestead
Located 10 km east of Gisborne at 1012 Kilmore Road, Riddells Creek, Dromkeen homestead was built for Judge Arthur Chomley in 1889. It features fine pressed ceilings and large fireplaces and is surrounded by hectares of garden. The history of the house is fascinating. Judge Chomley named the house after his mother's family home in Ireland. In 1973 the house was purchased by Joyce and Court Oldmeadow who used it to store their remarkable collection of artwork, manuscripts and books of Australian children's literature. When Court Oldmeadow died in 1977 the collection was taken over by Scholastic Australia who, in 1985, purchased the homestead. Slowly the remarkable collection, known as the Dromkeen Children's Literature Collection, was built up and in 2012 the Dromkeen Foundation and Scholastic Australia gifted the entire collection to the State Library of Victoria. You can read more about this story at https://www.slv.vic.gov.au/about-dromkeen. It notes: "The Scholastic Dromkeen Children’s Literature Collection is a unique collection of original artworks and manuscripts, including approximately 7500 original illustrations from many of Australia’s best loved children's books. Importantly, the collection includes not only original finished artwork but also sketches, preliminary artwork, diagrams and mock-ups, revealing the complex creative journey in producing picture book stories for children. The Dromkeen Collection showcases Australia’s brilliant picture book illustrators and provides a visual record of Australian heritage, history, environment and culture." Since 2012 the collection has been housed in the State Library.
Today Dromkeen is a combination of historic homestead, art gallery (with many fine works concentrating on illustrations of children's books), a function centre and wedding venue, and a cafe and tea room. It is open from Wednesday to Sunday from 10.00 am - 5.00 pm. For more information visit the website at https://www.dromkeen.com.au.

Macedon Regional Park
Located 17 km north of Gisborne, the Macedon Regional Park is a protected forest area which is ideal for bushwalking, picnics and scenic drives. There is an excellent Visitor Guide with detailed maps which can be downloaded at https://parkweb.vic.gov.au/__data/assets/pdf_file/0003/315687/Macedon-Regional-Park-visitor-guide.pdf. Apart from a number of walks, the park has some interesting and unusual attractions including:

Mount Macedon War Memorial Cross
This remarkable structure was built in 1934 by a private citizen, William Cameron, to commemorate those who died in World War One and to provide work for the unemployed during the depression. By 1995 it had become unsafe. It was demolished and the present cross, made of pre-cast concrete, was installed. There is more detail at http://monumentaustralia.org.au/themes/conflict/multiple/display/32763-mount-macedon-memorial-cross.

Major Mitchell Lookout
Located close to the Tea Room and off the path out to the Memorial Cross, the lookout, named after Major Thomas Mitchell who was the first European to climb Mt Macedon in 1836, offers views to the north-west of the mountain.

DC3 Kurana Display
Located south of the Harbison Picnic Ground, the Kurana Display records the crash on the mountain of a DC3 in 1948. The plane was flying from Melbourne to Deniliquin.

Camels Hump
Located on the road beyond the Western Lookout, this rocky outcrop is known as a mamelon - a volcanic feature formed six million years ago when lava squeezed through a vent in the earth's crust. The geological term was first used by the French explorer and naturalist, Jean Baptiste Bory de Saint-Vincent who observed the Dolomieu Crater in the Piton de la Fournaise volcano on the island of Reunion, decided it looked like a woman’s nipple, and named it with the French word for nipple - “mamelon”.

Walking
There are a total of 14 walks in the park (see https://parkweb.vic.gov.au/__data/assets/pdf_file/0003/315687/Macedon-Regional-Park-visitor-guide.pdf). There are three directly connected to the parking area near Harbison Picnic Ground:

Walk 3: Douglas Road to Macedon War Memorial Cross - "Since the Ash Wednesday fires of February 1983 there has been prolific regeneration including stands of wattle, Messmate, Snow Gum and Alpine Ash. The understorey features Hazel Pomaderris and Hop Goodenia, and ferns such as Mother Shield and Fishbone. The track merges onto a sealed path in the Cross Reserve. Turn left to exit the war memorial cross reserve via the Gatehouse."

Walk 4: Macedon War Memorial Cross to Cameron Picnic Ground - "Walk towards the Tearooms, turn left and follow the sign to the Western Lookout loop, with views of Woodend and the surrounding areas. Return to the main track and proceed in a north‐west direction through the Messmate forest, where you might see wallabies and wombats and hear many types of birds.  Cameron Picnic Ground is a good place to plan a break ‐ it is 200m to the right off the main track."

Walk 5: Cameron Picnic Ground to Camels Hump - "Head north‐east. The track heads around the northerly aspect of the range crossing several management tracks, eventually merging into a dirt road ... Turn right and follow the signs to McGregor’s Picnic Ground.  The track continues along the northern boundary of the picnic ground to a management track ‐ turn right and follow the signs to Camels Hump carpark. A short 500 metre walk takes you to the peak of Camels Hump. A direction dial on the viewing platform helps you identify features in the surrounding landscape including the Hanging Rock."

Dingo Discovery Sanctuary, Research and Education Centre
Located 11 km south of Gisborne at 366-400 Gisborne-Melton Road, Toolern Vale, is the Dingo Discovery Sanctuary, Research and Education Centre. The sanctuary explains that it is "a unique conservation establishment set on 40 acres in the picturesque foothills of the Macedon Ranges. It is situated only 35 minutes from the CBD to Melbourne’s north west, in the Shire of Melton, abutting the Pyrete State Forest, and only 30 minutes from Melbourne Airport.
"Although not officially open to the public on a full-time basis, many hundreds of visitors from around the world find their way to this haven annually to learn about the dingoes, and enjoy the outstanding views across Melbourne suburbs, city and bays. This is arranged either by open days (July-August), special bookings and group tours. Visitors are welcome only by prior appointment, as we do not operate as a petting zoo or zoo.
"We believe that our exceptional facility that is home to over 40 dingoes, along with our envisioned eco-friendly Visitor Interpretative and Education Centre, has and will become a hub for all of the activities of The Australian Dingo Foundation and be a showcase for the aims of our mission." For more detailed information, and to arrange a possible visit, check out https://dingofoundation.org or call (03) 5428 1245.

* Prior to European settlement the area was occupied by the Woiwurung people.

* The first European settlers were pastoralists who took up runs in 1836 or 1837.

* In 1836 John Aitken brought sheep from Tasmania to Mount Aitken.

* In 1837 Henry Howey established a pastoral station on Jacksons Creek.

* By 1851 the goldrushes at Castlemaine and Bendigo saw prospectors leaving Melbourne, resting overnight at 'Bush Inn', and then travelling through the potentially dangerous Black Forest in the daylight.

* The settlement was surveyed in 1851 and named after Henry Fyshe Gisborne.

* An Anglican Church was consecrated in 1855.

* The Court House was built in 1858. A Presbyterian church was opened that year.

* Gisborne became a road district in 1860 at which time it had 13 hotels. That year also saw the opening of a Mechanics Institute.

* The opening of the Tullamarine Freeway in 1970 meant the area was within commuter distance of Melbourne.

* The Rosslynne Reservoir, providing water for the town, was completed in 1974.

* In 1986 the Calder Freeway bypassed the town.

The Daylesford and the Macedon Ranges website has useful information on Gisborne. Check out https://www.visitvictoria.com/regions/daylesford-and-the-macedon-ranges/destinations/Gisborne. 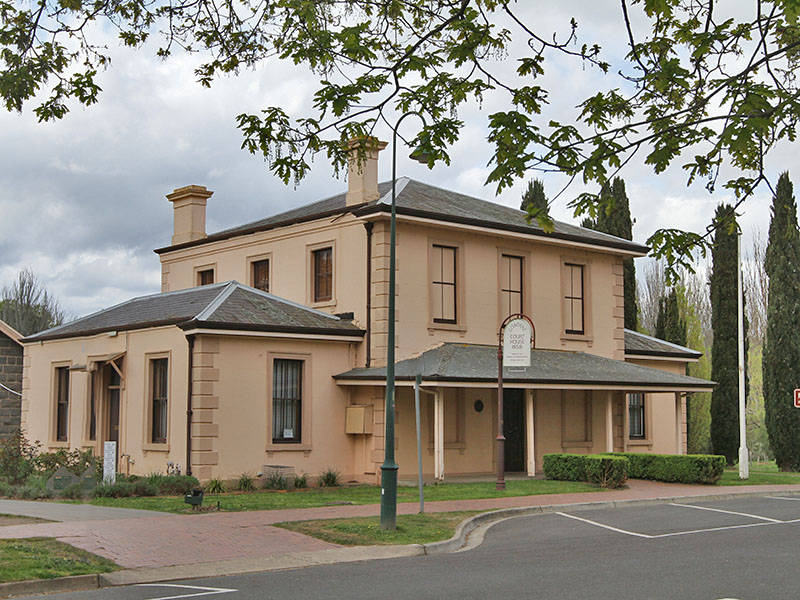 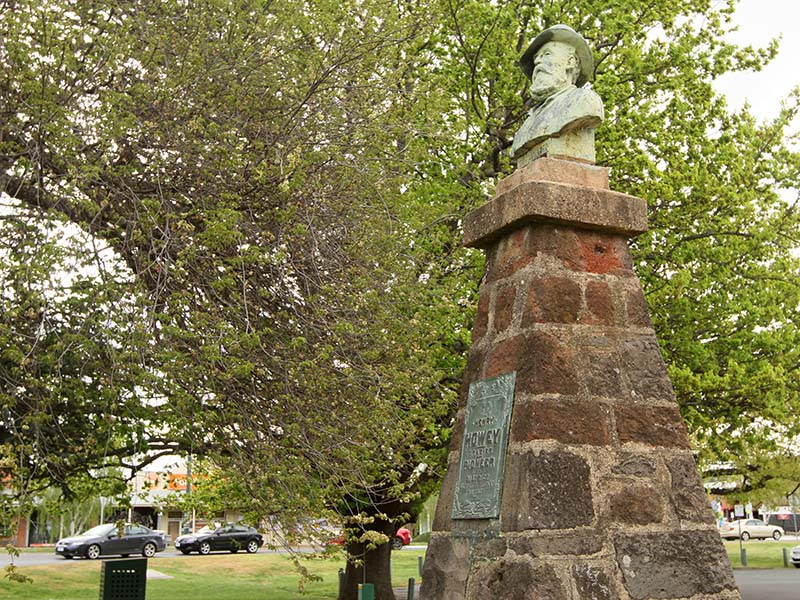 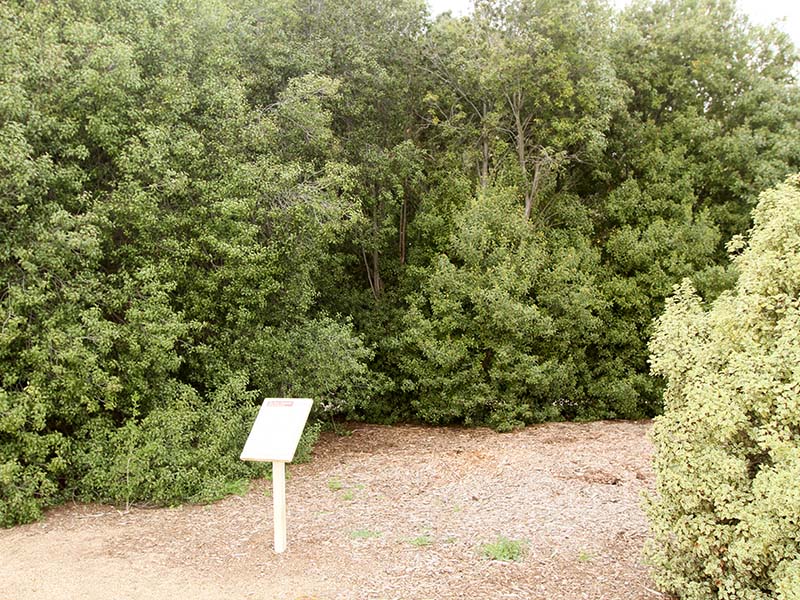 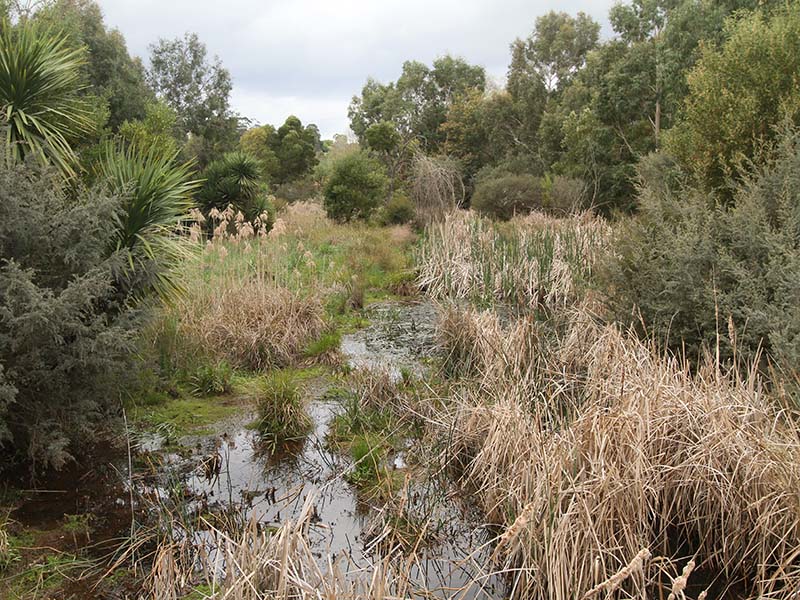