On the surface Glenrowan is a small town now by-passed by the Hume Freeway. In reality, because of the famous events which occurred in June 1880 when the Kelly Gang, with Ned Kelly dressed in his famous armour, were captured in the town after a violent and bloody siege, it has become a magnet for tourists. Today, not surprisingly, it is a popular tourist town built around a single theme: Ned Kelly.

Glenrowan is located 234 km north-west from Melbourne just off the Hume Freeway, between Benalla and Wangaratta. It is 220 metres above sea level.

Although it sounds as though it is the name of a village or valley in Scotland, the town was actually named after James and George Rowan who came to the area in 1846 and farmed the land until 1858.

Historic Sites
Such was the indifference to the Kelly myth that the buildings which were an integral part of the Kelly siege have all been destroyed. If he were alive today Ned Kelly would not recognise the town. However, because of the boom in tourism, there are a number of plaques and markers (wooden statues depicting the various characters involved in the siege), which allow the visitor to trace the events of 28 June, 1880. They include the railway station, the site where the Glenrowan Inn stood before it was burned down and the gully where the troopers took cover.

Ned Kelly's Last Stand at the Glenrowan Theme Park
The Glenrowan Theme Park, an $8.5 million theatrical experience, has been the main attraction in Glenrowan for the past thirty years. It is a multi-million dollar cinematic and theatrical depiction of the Kelly gang's last stand, enacted by computerised robots in the manner of Disneyland. There are different sets which drramatically depict the different moments of the siege - the waiting room of Glenrowan railway station, the hotel, the backyard, the graveyard, the gunfight, the burning of the hotel and the execution at Melbourne Gaol. It lasts for forty minutes and moves from one room to another. Authentic props are incorporated into the show including the bar of McDonnell's Tavern, a hand-gun owned by Ned and Sergeant Kennedy's hitching post.

Kelly Statue - The Big Ned
This is the third Big Ned Kelly to appear in Glenrowan. The first was stolen and dumped in the river. The second could only be seen for a fee at Kellyland (now the Glenrowan Theme Park) and this, the third, was commissioned from Kevin Thomas, a Sydney-based special effects technician. It stands 6-metres tall, weighs 1.5 tonnes, is made out of fibreglass and was transported down the Hume Highway from Sydney in April, 1992. At the time it cost $12,000. It depicts Kelly at the time of his capture at Glenrowan - clad in armour, rifle in hand.

Kate's Cottage and Kelly Museum
Kate's Cottage combines Kelly memorabilia, a museum and a replica of the Kelly homestead. It is named after Ned's mother. Visitors walk through the shop and enter Ned Kelly Memorial Museum. Out the back is a stringybark replica of the Kelly homestead made with a broadaxe and adze and decorated with 19th century furnishings. It is claimed that Ned built the original around 1877. There are other pieces of 19th century memorabilia including a coach and a blacksmith's shed. It is open daily from 9.00 am to 5.30 pm, tel: (03) 5766 2448.

Glenrowan Cobb & Co Souvenir Gift Shop and Museum
The old Cobb & Co ticket office is a combination of museum and gift shop. The centrepiece is an authentic reconstruction of the town's original Cobb & Co changing station and the shop includes such tourist wonders as Ned bells, Ned belt buckles, Ned caps, Ned letter openers, Ned place mats and even Ned socks tel: (03) 5766 2409. It is open from 9.00 am to 5.30 pm daily.

In 1844 Ben Warby (after whom the park is named) settled in the area. By the 1870s the locals believed that Ned Kelly was hiding in the Warby Ranges and using Mount Glenrowan as a lookout point.

The park was established in 1978 and been growing in size with a number of acquisitions over the years. It is an area of exceptional bushland incorporating waterfalls (notably Briens Gorge Falls), springtime wildflowers, lookouts (notably Ryans Lookout) across to the Victorian Alps and wildlife including black wallabies, echidnas, wedge-tailed eagles, lorikeets, barking owls and sugar gliders. The park is popular for walking, mountain bike riding, prospecting and fishing.

The park has a number of walks. There is a track to the summit of Mount Glenrowan (9.4 km return from Taminick Gap), and the short walks to Briens Gorge Falls and Salisbury Falls (4.5 km). For more information check out http://parkweb.vic.gov.au/explore/parks/warby-ovens-national-park

* It is believed that the Pallanganmiddang Aborigines occupied the area prior to European settlement. They were probably part of the Taungurong language group.

* The first Europeans to settle in the area were the Rowan brothers who arrived in 1846.

* A townsite developed slowly but it was not until the 1860s that it became a significant service centre for the area.

* The town was officially proclaimed in 1861.

* On 27 and 28 June, 1880 the town achieved fame when Ned Kelly and his gang fought a battle with the police. Ned wore his famous head piece during the battle. See below for detailed account of the events.

* The passenger railway service closed in 1981.

(a) The Background
In 1867 the Kelly family (Ned was only 12 at the time) moved to Eleven Mile Creek, south-west of Glenrowan. They had family connections in the area and it was believed that their relatives were probably involved in cattle and horse rustling. Two years later young Ned was arrested for armed robbery but the charges were dismissed. Then in 1870 he was jailed for six months for assaulting a hawker and sending the hawker's wife a pair of calf's testicles and an indecent note. He was only 15 at the time.

In 1871, shortly after being released for custody, Ned was convicted for receiving a stolen mare. This time his sentence was three years. Released from prison he worked for two years as a timber getter near Mansfield but by 1877, when he was 22, he was arrested at Benalla for drunkenness. It seemed the Kellys were always in trouble. In April 1878 a warrant was issued for the arrest of Ned's youngest brother Dan on a charge of horse theft. Constable Fitzpatrick went to the Kelly home to arrest Dan. He later claimed he had been shot by Ned although Ned claimed he had been hundreds of miles away at the time. Regardless of whether the accusations were correct rewards were now offered for the arrest of Ned and Dan and Ned's mother and her son-in-law received prison sentences for aiding and abetting an 'attempted murder'. Ned and Dan fled to the mountains where they were joined by Steve Hart and Joe Byrne. This quartet became known as the Kelly Gang and shortly afterwards Ned killed three policemen. They were declared outlaws and a reward offered for their capture, alive or dead. Subsequently the gang went on to rob banks at Euroa and Jerilderie, allegedly to finance a campaign to free their mother. After that they disappeared for 16 months.

(b) The Events at Glenrowan
In June 1880 Kelly hatched a plan to rob a train. The plan was to derail a train at Glenrowan, capture the police and take them into the hills, then rob Benalla's banks and exchange the booty and the captured police for Mrs Kelly.

On Saturday June 26,1880 the Kelly Gang travelled to the home of police informer, Aaron Sherritt, who was supposedly under the protection of the four troopers. The gang killed Sherritt assuming the troopers would raise the alarm and police reinforcements would come by train from Benalla. However the troopers hid in Sherritt's house and the train was delayed.

The gang then rode to Glenrowan where they forced two railway workers to tear up a section of railway track, cut the telegraph wires and took over the Glenrowan Inn with about 60 people in it.  A schoolmaster managed to warn the train and it was halted t Glenrowan station at about 3.00 am on the Monday morning.

Ned had fashioned a 40 kg suit out of mouldboard plough shares which included a cylindrical headpiece to cover his face. However the rest of his body was uncovered and when he confronted the police he was wounded in the arm, hand and foot.

When reinforcements arrived there were 34 police at the scene. Joe Byrne bled to death from a bullet wound to the groin. Ned escaped but returned at 5.00 am and was shot 28 times. The police set fire to the hotel to smoke out Dan Kelly (aged 19) and Steve Hart (aged 20) but they appear to have taken poison. One policeman and an Aboriginal tracker were wounded.

(c) The Trial and Execution
Ned Kelly was tried in Melbourne for murder and sentenced to death. A petition with 60,000 signatures called for a reprieve, a personal appeal was made to the governor and a public meeting the night before the proposed execution was attended by 4,000 supporters. However, he was hanged on 11 November 1880.

There are, not surprisingly, a lot of useful websites relating to the town. (1) http://www.glenrowantouristcentre.com.au/ focusses on the Glenrowan Tourst Centre Theme Park which re-enacts the Kelly siege every half hour using robots to depict the action. (2) the Kelly Country Tourism site looks specifically at the history surrounding the Kelly siege. Check out http://www.nedkellysworld.com.au/glenrowan/ 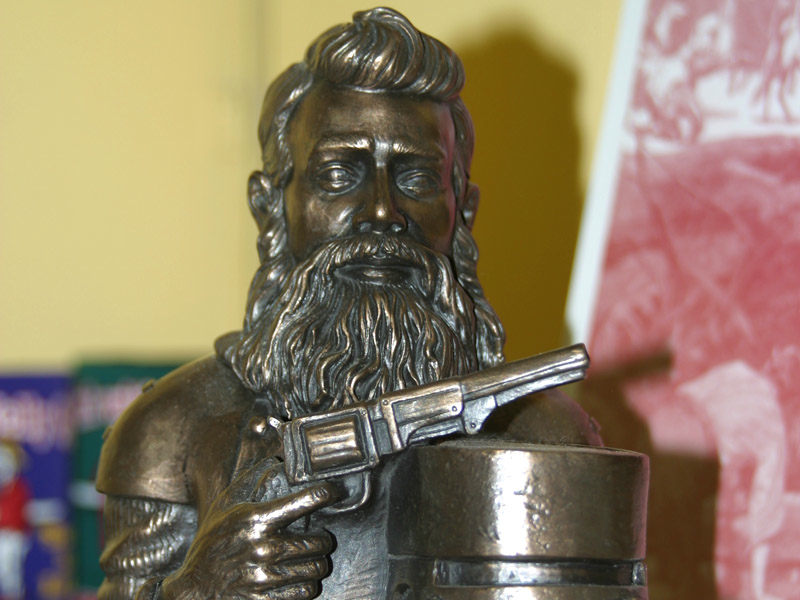 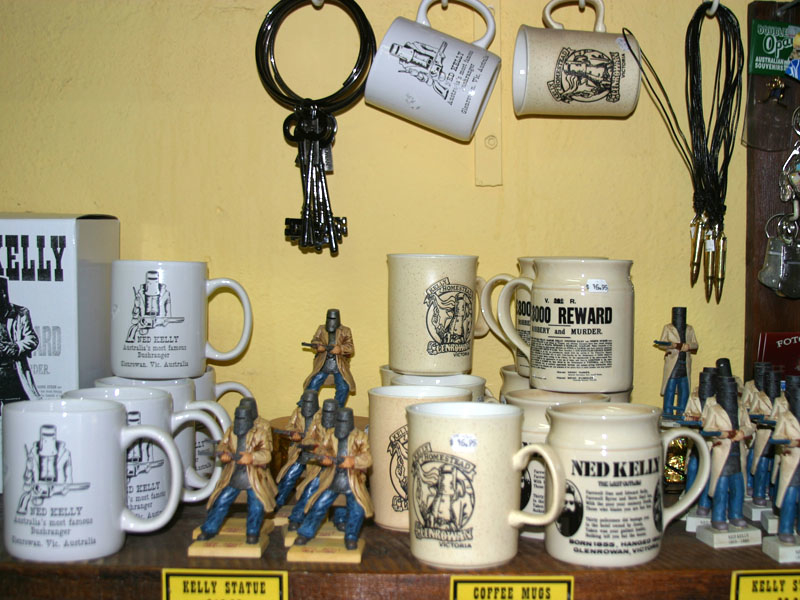 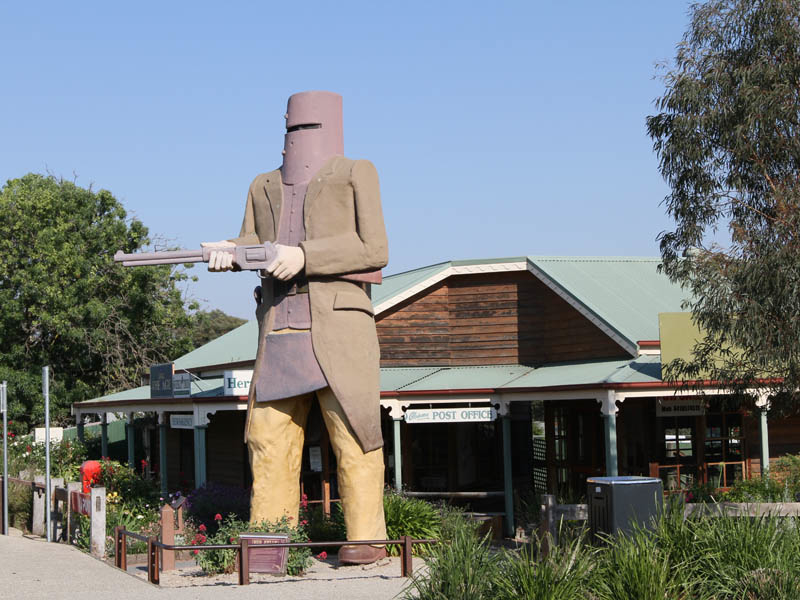 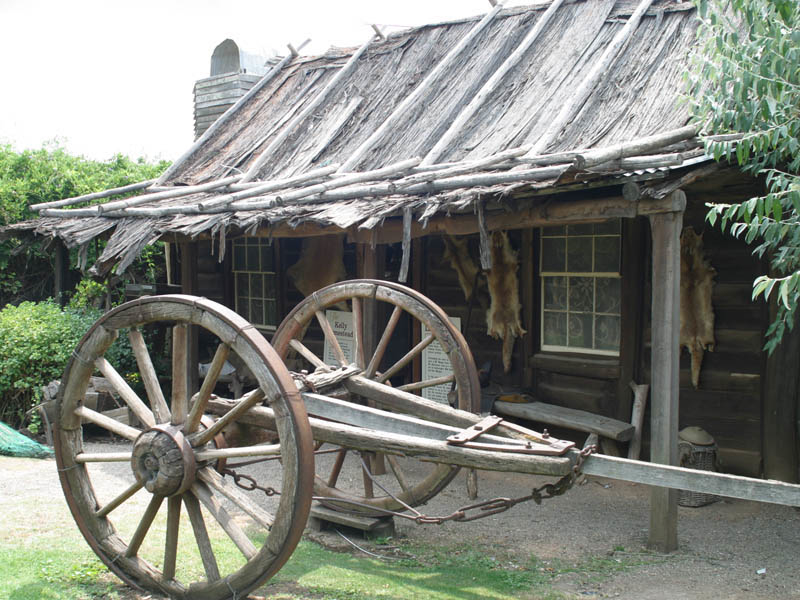