Although there are two towns - Harden and Murrumburrah - the reality is that there is no clear point where one town ends and the other begins and the Burley Griffin Way runs in a single, wide road through both places. Why two towns? The site of the town of Murrumburrah was identified in the 1840s. When the railway arrived in 1877 a new station was established a mile from Murrumburrah on flat land in the location that became known as Harden. Harden was the railway station. Murrumburrah was the town.
This is an agricultural area with both the rich local soils and the cool, dry climate being ideal for wheat, oats, canola, lupins, mustard oil seed and cold climate fruits including nashi pears, cherries, strawberries, peaches, nectarines, prunes and apricots. The local economy is driven by agriculture with both towns operating as service centres for the surrounding district which also includes large grain-storage silos, sheep, cattle, horse studs and vineyards.

Harden-Murrumburrah, which is 416 m above sea level, is located 338 km south-west of Sydney and 49 km north-west of the Hume Highway via Burley Griffin Way.

The name Murrumburrah comes from a sheep station named 'Murrumburra' which was established in the district in the late 1820s. When the town was gazetted in 1858 it was named Murrumboola which was said to be a Wiradjuri word for "two water holes". Harden was originally known as Murrumburrah North but in 1880 the New South Wales Postmaster-General renamed it "Harden". No one is sure why, although the Post Office at Currawong had been named Harden.

In Murrumburrah:
Murrumburrah was declared an historic village in 1990. It sits on either side of the Murrumboola Creek and has a number of interesting buildings and places of historic interest.

Harden-Murrumburah Historical Museum
The Harden-Murrumburah Historical Museum is located in the old School of Arts building at 298 Albury Street (Burley Griffin Way). Displays include a blacksmith's and wheelwright's premises (1874 - c.1940); historic garments from the 1880s; the impressive Harden railway refreshment room bar, made of oak and brass, plus railway memorabilia and artefacts; a chemist's shop with items dating back to 1890; a music room; an early Australian kitchen with paraphernalia; a vintage bathroom and thunder box; a child's bedroom and a photographic collection. It is open 10.30 am - 4.00 pm Saturdays and 1.00 pm - 4.00 pm Sundays. Tel: (02) 6386 2555 or (02) 6386 2728.

Murrumburrah Court House
The Murrumburrah Court House (1880) is located at the corner of Albury and Vernon Streets. It is an elegant, two-storey brick building with single-storey wings with quoins and arched windows. Today it is managed by the local Arts Council. It is currently used for art workshops, art displays and occasionally is used for live performances. Check out http://facilities.arts.nsw.gov.au/facilities/murrumuburrah-court-house.

St Mary's Catholic Church
Located in Vernon Street, St Mary's Catholic Church is the oldest church in town. The foundation stone was laid in 1868. It was extended in 1895-96 with granite for the tower quarried at Demondrille (3 km north-west of Murrumburrah) and transported to the site by bullock and horse teams. The church is located at the end of Clarke Street but it can be reached by walking over the railway footbridge at the end of Vernon Street. St Mary's Convent was opened in 1892 with additions in 1902 and 1933. It closed in the mid-1980s.

St Paul's Anglican Church
Located at the corner of Iris and Swift Streets (120 Swift Street), St Paul's Anglican Church was built between 1875 and 1884. Prior to the construction of the church, services were held in the Commercial Hotel. A book about the church has been written - A Brief History of St Paul's Murrumburrah. It can be downloaded at http://search.informit.com.au/documentSummary;dn=318315290208841;res=IELHSS.

Memorial to the 1st Australian Horse & Australian Light Horse
Located just beyond the Museum in the town's main street is a memorial to 1st Australian Horse & Australian Light Horse. The sign at the memorial explains: "The first muster and enrolments of the 1st Australian (Volunteer) Horse took place in Harden Murrumburrah in 1897. About 30 of these recruits went off to the Boer War. The 1st Australian Horse was absorbed into the Australian Light Horse in 1903. The permanent memorial to honour these volunteers as well as the Light Horse was created following the successful celebrations for the Centenary of the first enrolments to the 1st Australian Horse (1897-1997). The memorial includes a free standing 20 tonne granite block with a bronze statue of Corporal William Bradford ("Anticipating the Future" sculpture by Carl Valerius) of the 1st Australian Horse.
* the western side face is a diorama depicting the charge of Beersheba
* the eastern face a scene taken from the South African campaign
* the southern side a relief of Colonel Kenneth McKay
The Kimberley Rose random stone paving reminds us of the spilling of blood in war, the black granite of the horse trough symbolises death in war and the water running over all sides is life renewal. The stone wall contains bronze plaques which feature the names of most of the original recruits to the 1st Australian Horse in 1897. It also signifies a wall, so easily created by intolerance, which can lead to conflict. Behind the wall is a bush garden, a flat area representing farms and pavers in the profile of city buildings. These depict the coming together of the people from the cities, farms and the bush to go to war. Below the wall the garden planting consists of Australian natives, together with plants native to South Africa and the Middle East. Peace is symbolised by the planting of Peace roses and a 'Lone Pine' - an Aleppo Pine from Turkey." On 28 August, 1897 a small group of local men answered a recruitment call for enrolment in the 1st Australian (Volunteer) Horse. The muster at the Harden-Murrumburrah racecourse was the first to take place in the formation of this famous unit which eventually became the legendary Australian Light Horse.

Bill the Bastard – A True Aussie War Hero
Perhaps the most interesting part of the Memorial display is the sculpture of five men, all in army uniform, riding a horse. It is one of those great "untold" stories and one that is a reminder of the importance of horses in wars up to World War I. The inscription on the statue reads: "A bronze sculpture of the 16 hand Chestnut known as Bill the Bastard stands on the lower western side of the Memorial Garden. Bill the Bastard gained his title as a result of his habit of bucking whenever he was saddled but was also noted for courage, strength and staying power. At the battle of Romani (an Egyptian town on the Sinai Peninsula where the ANZACs Mounted Division and the British 52nd (Lowland) Division defeated the combined armys of Germany and the Ottoman Empire and thus ensured the safety of the Suez Canal for the remainder of the war) on 4th August 1916, Major M Shanahan DSO, 2nd Australian Light Horse, heard that 4 men, having lost their horses, were left out in the field at the mercy of the Turks. Riding Bill the Bastard, Major Shanahan returned to the scene under heavy enemy fire, collected the stranded men and Bill galloped back across the thousand yards of sand carrying the additional 4 Light Horsemen (2 on his back and 1 hanging on to each stirrup). For his services in carrying those men to safety Bill the Bastard was retired with honour the following day and served the remainder of the war as an officer’s packhorse.”

In Harden:
The most dominant building at the Harden end of town is the huge St Anthony's Catholic Church which stands at the top of the hill and is part of Our Lady of Mercy Parish of Murrumburrah/Harden. It is a relatively recent church with the foundation stone being laid by the Bishop of Goulburn in 1934.
But the real surprise of Harden is Neill Street, the main street which is located between Albury Street (Burley Griffin Highway) and the railway line. It is a true timewarp unaffected by major traffic. Turn north down either Station Street or East Street.
Of particular interest are (a) the distinctive CBC Bank (now the NAB) which is a single-storey Federation building erected c.1905 of brown brick with an unusual slate-clad hipped and gabled roof featuring terracotta ridge-capping. There are stained-glass fanlights and sidelights, a detailed facade and entry porch with pediment (b) the Mechanics Public Hall Institute (established 1879, erected 1909) (c) the Doncaster Hotel (1906) at the end of Neill Street (d) the Carrington Hotel - strategically placed to attract passengers alighting from the train at Harden Station (e) and the remarkably elaborate two-storey building now the Harden Pharmacy.

Wallendbeen
Wallendbeen is 17 km north-west of Murrumburrah and is named after Wallendbeen station ("wallendbeen" is probably a Wiradjuri word meaning "stony hill") which was settled by Alexander Mackay. The tiny village was laid out after the railway arrived in 1877. Today it is the heart of the rich local wheat and sheep area. It is known for its oval which hosts the local cricket team - the team has been in existence since 1887. Wallendbeen has an important place in the history of the bushranger, Ben Hall. In 1863 a man named Barnes was shot dead near Wallendbeen Station while fleeing Hall's colleagues, John O'Meally and John Vane, and, six weeks before Hall was killed in 1865, Hall's gang held the cook and a visiting piano tuner in the dining room of the homestead while they stole three horses.

Galong
Located 24 km south-east of Harden-Murrumburrah, Galong is known for its remarkable walled cemetery which is included on the Register of the National Trust. Graves date back to 1854 and the cemetery features some particularly impressive monuments in marble and sandstone, some of the graves are the work of Frank Rusconi, the stone mason responsible for Rusconi's Masterpiece in Gundagai. St Clement's Monastery, now a retreat centre, was built as the home of the town pioneer Ned Ryan who was transported to Australia as a convict in 1816 and, by the 1830s as a ticket-of-leave man, had settled in the area. Ryan is buried in the local cemetery. Today the town is known for its limestone mine which has been operating, off and on according to prices and deposits, since 1885.

* Prior to European occupation the area was home to the Wiradjuri Aboriginal people.

* In 1821 the explorer Hamilton Hume reached the Yass plains.

* In 1824 Hamilton Hume with William Hovell passed through the district on his way to Port Phillip.

* A sheep station known as 'Murrumburra' was established in the district in the late 1820s.

* By 1830 there is evidence of Ned Ryan owning land at Galong; James Roberts having a property at Currawong; and Dr John Harris having property at Kalangan.

* James Kennedy, superintendent of the 'Murrumburra' run, opened an inn around the late 1840s which was the first authorised business on the future townsite.

* Gold was discovered a few kilometres to the north-west of the present townsite in 1854.

* In 1856 James Kennedy wrote to the government wanting to formally establish a townsite.

* A settlement was gazetted in 1858 as Murrumboola (Aboriginal for two water holes).

* A mail service began in 1860 and a flour mill soon followed.

* The main railway reached the town and the railway station was built in 1877.

* The larger runs of the district were broken up in 1879.

* Until 1880 Harden was known as Murrumburrah North. The name was changed to Harden by the Postmaster General. Harden became the main railway station in the area.

* A railway branch line to Blayney opened in 1885.

* On 28 August, 1897 the first enrolment of men in the 1st Australian (Volunteer) Horse occurred on Harden-Murrumburrah racecourse.

* By the beginning of the 20th century Harden's commercial centre had outstripped that of Murrumburrah.

* The railway refreshment room at Harden closed in 1957.

The local shire council website has useful information on the district. Check out http://www.harden.nsw.gov.au and http://www.visitharden.com.au. An excellent additional source of information is https://www.visithilltopsregion.com.au which covers Young, Jugiong, Boorowa and Harden Murrumburrah. 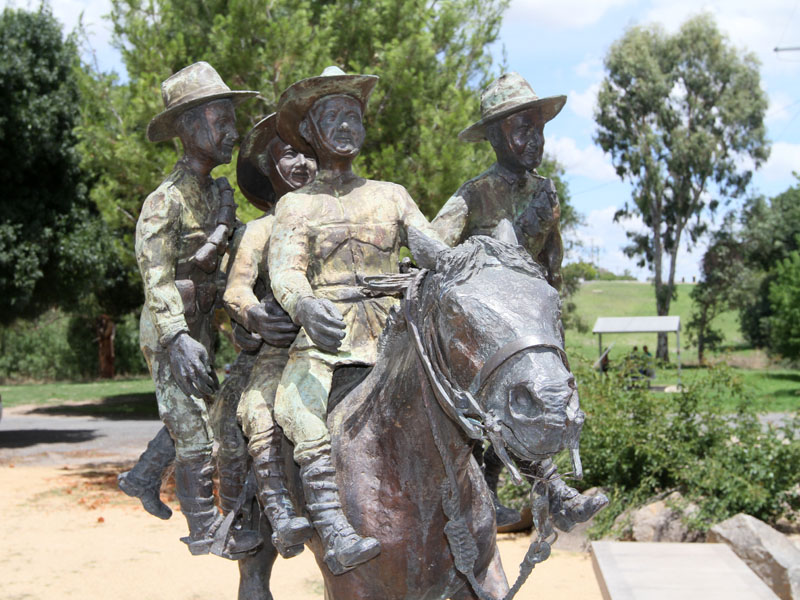 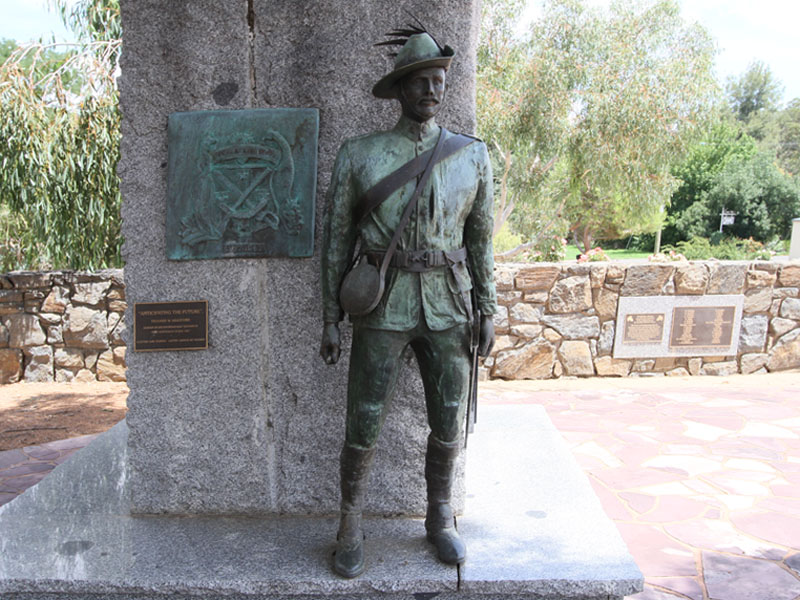 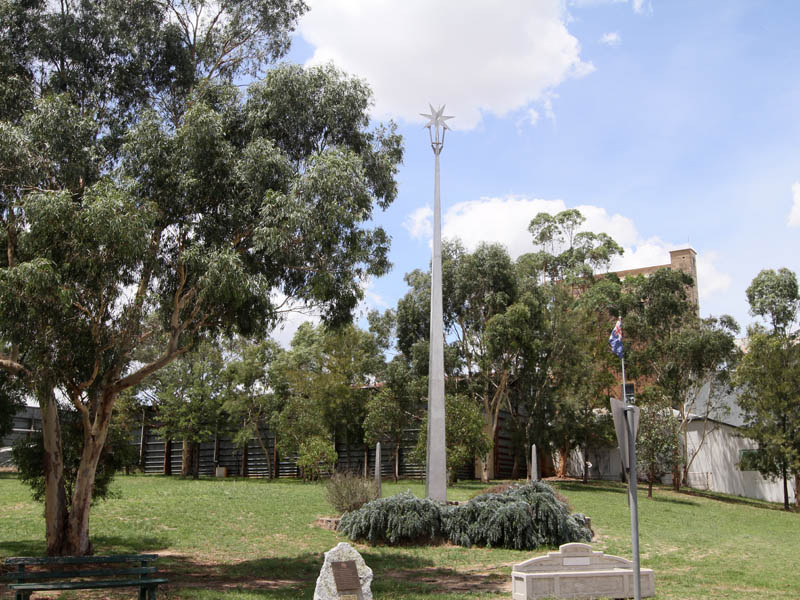 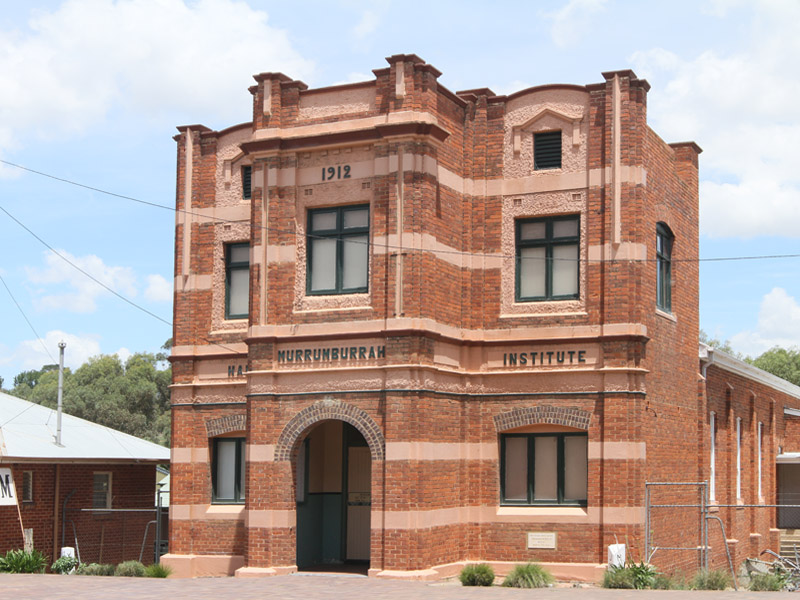 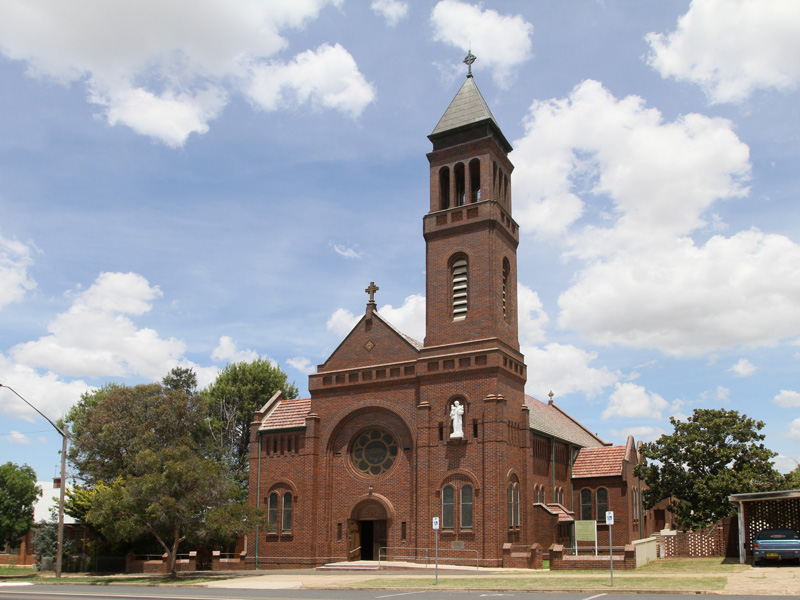 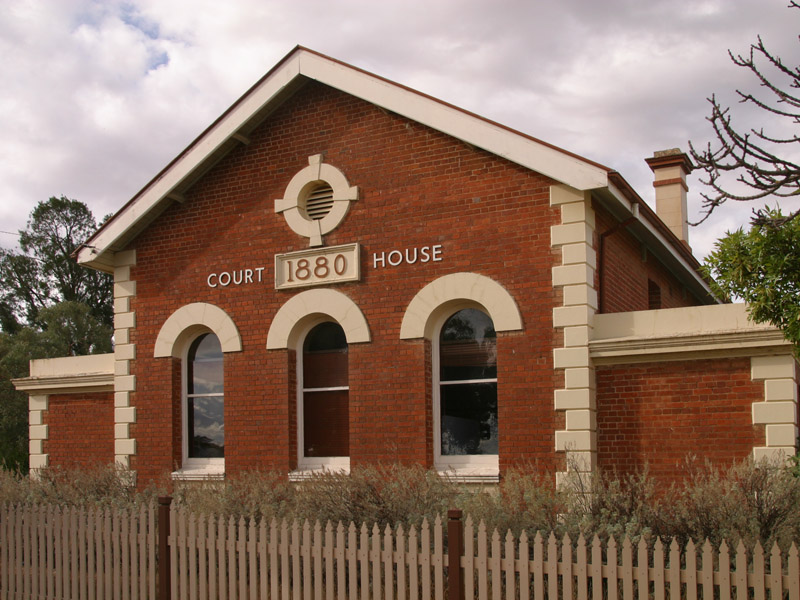 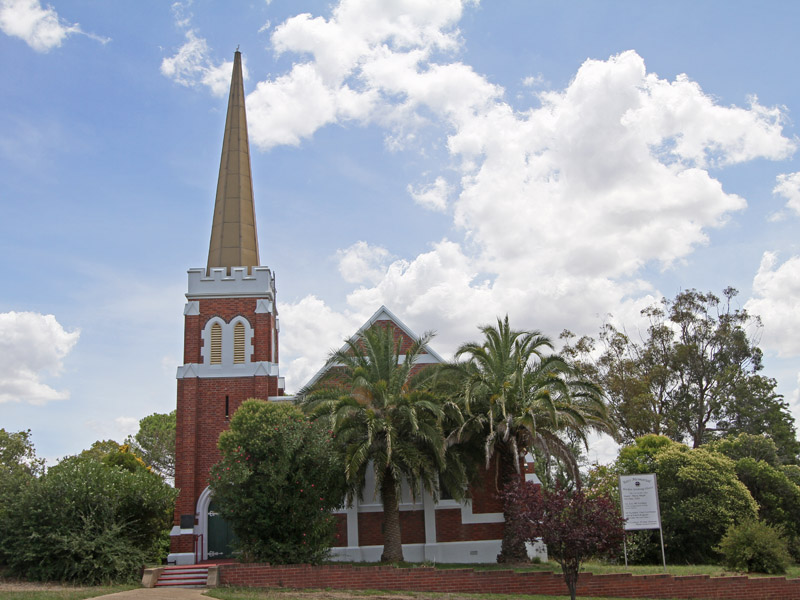