Jerramungup is a small, neat, modern wheat and sheep town with good tourist facilities which has developed since the 1950s when it was opened up as a War Service Land Settlement area. Today it is a small town on the corner of the South Coast Highway and the Gnowangerup-Jerramungup Road between Perth and Esperance. The great appeal of the area is the richly diverse, and wildly beautiful, Fitzgerald River National Park which lies to the south of the town.

Jerramungup is located 440 km south east of Perth on the edge of the Fitzgerald River National Park. It is 181 km north east of Albany.

'Jerramungup' is probably a simplified pronunciation of the Aboriginal word 'yerra-mo-up' which refers to a yate tree and means "place of the tall yate trees which grow through the mist". When the explorer John Septimus Roe passed through the area in 1848 he wrote in his diary "we were gladdened by the view of a large extent of good grassy country to the N.E. lightly timbered, and at this time well watered by a river and its numerous branches. It is known to the natives as Jeer-a-mung-up."

All Saints Community Church
In 1969 the Jerramungup Council decided to levy ratepayers to help pay for the cost of All Saints Church, an inter-denominational (community) building which the council argued was a community service. So irate did seven of the local ratepayers become that they appealed to both the Queen and the United Nations. They lost and an anonymous person paid $41,000 which covered the loan and legal costs. The church is located on the corner of Memorial Road and Vasey Street.

Fitzgerald River National Park
The beautiful Fitzgerald River National Park, which covers 297,244 ha of coastline between Bremer Bay and Hopetoun, is recognised as one of the largest and most botanically significant national parks in the country because it can claim to have nearly 20% of Western Australia's floral species (1,883 plant species have been identified, 75 of which are found nowhere else) and it has a superb and diverse landscape which includes plains, breakaways, headlands and impressive white beaches and inlets.
It has four rivers cutting dramatic gorges, wide sand plains, isolated mountains, rugged cliffs, pebbly beaches and spectacular displays of wildflowers between August and October.
In A Park in Perspective by Keith Bradby the appeal of the park is explained: "The park sits astride the incised valleys of four major river systems, which flow south-east to the coast. Dominating the southern section is a low range of rugged quartzite hills known collectively as The Barrens, while the core of the park is an extensive undulating plain ... The flora of the park is exceptionally rich and diverse. Although the Park is only 0.2 per cent of Western Australia's land surface, over 20 per cent of Western Australia's plant species occur there. Many of the plant species are endemic to the region, reflecting the tight and varied plant/soil mosaics. Vegetation varies, from woodland on the richer soils through to mallee and mallee heath.
"There are more recorded species of birds, mammals and frogs than in any other reserve in south-west Australia. This is partly a reflection of the park size, but also because of the blending of wet country and dry country species which occur in the park."
In fact recent research has revealed that the park is home to 22 mammal species, 41 reptile species, 12 frog species and more than 200 bird species including rare species such as the western ground parrot, the western bristle bird and the western whipbird.
From Bremer Bay there is limited access to the park. The Fitzgerald River NP brochure suggests entry from the west "Devils Creek Road enters the western section of the park and can be accessed from the South Coast Highway just north of Gairdner. Pabelup Drive connects Devils Creek Road and Quiss Road. The secondary two-wheel drive road network in the western area of the park is unsealed gravel road. Points of interest accessible by two-wheel drive vehicles include Mt Maxwell, West Mt Barren, Quaalup Homestead, Point Ann and St Mary Inlet. The access track to Trigelow Beach is fourwheel drive only and may be closed during wet conditions."
Two roads run off the South Coast Highway to the east of Jerramungup. Quiss Road runs down to St Mary Campground and the coast at Point Ann and St Mary Inlet and Hamersley Drive is a sealed road that winds along the coast between the park’s eastern boundary and Hamersley Inlet. This drive takes visitors to Four Mile Beach, Barrens Beach, Barrens Lookout, East Mount Barren, East Mylies, Mylies Beach, Cave Point and West Beach. There is a very useful website created by the WA Parks and Wildlife Service. Check out https://parks.dpaw.wa.gov.au/park/fitzgerald-river or tel: (08) 9842 4500. The brochure on the park can be downloaded at https://parks.dpaw.wa.gov.au/sites/default/files/downloads/parks/20140471-FitzgeraldRiverNP_brochure_WEB.pdf and the rangers at the west of the park can be contacted at (08) 9835 5043.

Walks from the Quiss Road entrance to Fitzgerald River NP
West Mount Barren Summit Trail - Moderate difficulty - 1.7km return (1-2 hours) - goes to the top of West Mt Barren which provides panoramic views over the western section of the park.
Mount Maxwell Lookout - a short 200 m walk to the Mt Maxwell Lookout which provides panoramic views of the western peaks.
Point Ann Heritage Trail - a gentle one hour walk (1 km) with views over Point Charles Bay and the park’s rugged central coastline. In winter southern right whales visit the bay. The interpretation panels explore the Aboriginal and European heritage of Point Ann and follow a section of the famous rabbit proof fence.
Mamang Walktrail from Point Ann to Point Charles and Fitzgerald River Inlet - this 31 km return walk passes through bushland country with dramatic views of Lake Nameless and the central mountain ranges and passes historic sites and offers views of the Fitzgerald River beach and inlet.

Whale Watching
The coastline to the south of Jerramungup, notably the coast of the Fitzgerald River National Park, is home to southern right whales during the winter months where they come for protection and to nurture their newborn calves. Whale watching can be productive from Point Ann (recognised as one of the best spots of the coast) from July to October.

Hassell Homestead and Barn
In 1848 Captain John Hassell moved into the district having been granted 20,000 acres. He brought 2,000 sheep and by 1925 the Hassell family had 44,000 acres and 18,000 sheep. By 1861 the family were growing wheat and barley. There are two Hassell homesteads (one built around the turn of the century in an 'Old English' design and an old stone cottage dating back to about 1859) which can be viewed from the road about 6 km from town. Head 5 km east on the South Coat Highway and turn onto the Woolshed Road beside the Gairdner River. They are on private property about 1 km from the turnoff.
The WA Heritage Council explains: "The dwelling is significant for the following reasons: The old stone house with nearby store and barn was built by the Hassells (1859-61) and used by the family until the erection of the new house in 1906. No longer habitable but capable of being preserved further without deterioration the buildings are mainly of historical interest. Jerramungup – as the Hassells used to call the property – was taken up by John Hassell in 1849 and was one of the best known stations in the south of W.A. – mentioned in the journals of a number of explorers and remained in the ownership of the Hassell family for over 100 years (until brought for War Service land Settlement in 1951)." Check out http://inherit.stateheritage.wa.gov.au/Public/Inventory/Details/5fba7c08-040b-44a7-bc13-e6ac02a1ffd5 for a map and further details.

* The area around Jerramungup was first explored by John Septimus Roe in 1848 who passed through on his way to Esperance.

* In 1849 Captain John Hassell expanded the property he had already established at Kendenup to include 20,000 acres (8,100 ha) near the present site of Jerramungup.

* The township of Jerramungup didn't come into existence until 1953 when the area was targeted as a War Service Land Settlement area.

* The Hassell family sold Jerramongup to the Land Settlement Board in 1950.

* In 1969 the local council decided to levy ratepayers to help pay for the cost of All Saints Church, an inter-denominational building which the council argued was a community service.

* In 2003 200 tonnes of monzonite was shipped to London from Wirrup Hill, south of the town, to make the Australian War Memorial in Hyde Park.

There is Visitor Information at the Shire of Jerramungup, 8 Vasey Street, tel: (08) 9835 1022 and the Cameron Business Centre, Tobruk Road.

The local shire has a useful website. Check out http://jerramungup.wa.gov.au. 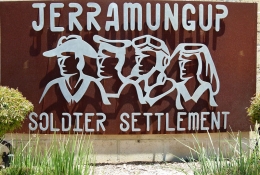 The sign at the entrance to the town reminds the visitor it was once a Soldier Settlement. 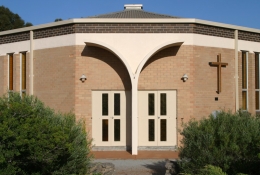 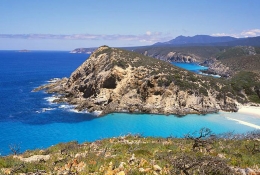