Latrobe is situated on the Mersey River 9 km south of Devonport and consequently is often the first place for travellers who have just disembarked from the Melbourne to Devonport crossing. Latrobe came into existence because it was the first convenient point where the Mersey River could be forded. Ferries came up the river to the site, now known as Bells Parade, where the town's docks were once located. Today this historic dockland has been turned into a pleasant picnic ground with deciduous trees giving it a European softness. In recent times the town, which has an impressive Public Building with the Library and the Court House Museum, has become a commuter area for Devonport. It is essentially a quiet town surrounded by rich agricultural lands, bush and woodlands, and is home to the Axeman's Hall of Fame. It is an historic timber town where the first woodchopping championship was held in 1891.

Latrobe, on the Mersey River 18 m above sea level, is located 93 km north-west of Launceston, 273 km north of Hobart and 10 km south of Devonport.

Latrobe was named in 1846 in honour of Charles Joseph La Trobe who was acting Lieutenant-Governor of Van Diemen's Land  from 1846-1847.

Court House Museum
The Court House Museum is located at 113-115 Gilbert Street (the town's main street) and housed in the local Court House, which dates from 1883. It is a typical local folk museum with a rich collection of over 600 prints and photographs which chronicle the history of the town and the surrounding area. It is open Tuesday to Friday from 1.00 pm - 4.00 pm. Check http://www.nationaltrust.org.au/tas/LatrobeCourtHouseMuseum for details or tel: (03) 6426 1289.

Australian Axeman's Hall of Fame
Located on Bell's Parade the Australian Axeman's Hall of Fame is housed in a building in the location where the first woodchopping championship was staged in 1891. The "hall of fame" is probably of interest only to people who have an involvement with the timber industry. There are galleries of old axes and saws; timber pillars in the dominant commercial timbers of Australia (huon pine, marri, coastal ash, red mahogany, blackwood, karri, blackbutt etc); the floor is made from Tasmanian hardwood. For more information check out http://www.axemanscomplex.com.au/ or tel: (03) 6426 2099. It is open from 9.00 am - 5.00 pm.

The Platypus Interpretation Centre and the Big Platypus
Part of the experience of the Axeman's Hall of Fame is the Big Platypus outside the centre which is a truly remarkably, and very large, chisel and chainsaw-carved depiction of a platypus. The Interpretation Centre is "Set in a cultural building as part of the Australian Axeman's Hall of Fame we have recreated a static display in the form of a forest glade, consisting of six ponds with a flowing water feature, inclusive of comprehensive dioramas, sculptures, mural boards and screens. Taxidermies of Tasmanian species and live native fish/water bug are on display." There are also Warrawee Reserve Landcare Platypus Tours which can be booked at (03) 6426 1774. For more details check out http://www.axemanscomplex.com.au/platypus.html. Bookings are essential.

Sherwood Hall
Located on Bell's Parade, Sherwood Hall was built by Thomas Johnson, a pioneer settler, and his wife Dolly Dalrymple Briggs (the first known child of an Aboriginal and white person union), in 1848-1850. During her time on the island, Lady Franklin, visited Latrobe and stayed at Sherwood Hall. The house was occupied until 1970 when it was seriously damaged by a flood on the Mersey River. Its importance as a unique colonial timber house was recognised and in 1991 a committee was formed to restore and preserve it. It was relocated to Bells Parade and officially opened in 1995. It is now a museum which opens on Tuesdays and Thursdays from 10.00 am - 2.00 pm and on Saturday and Sunday from 1.00 pm - 5.00 pm. Check out http://www.latrobetasmania.com.au/sherwood-hall.html or tel: (03) 6426 2888.

Frogmore
Frogmore, located 1.5 km west of Latrobe on the corner of Railton Road and Frogmore Lane is "a large two-storeyed brick Classical villa with a tiled hipped roof, built in 1880 for George Atkinson". It is characterised by a three level tower and graciousness acreage. George Atkinson, who built Frogmore, was the son of George Atkinson Sr. who built Latrobe's first General Store and first hotel, the Royal Charter, in 1858. It is a private home and not open to the public.

House Of Anvers
They promote themselves as "the total chocolate experience". Open from 7.00 am - 6.00 pm this is chocolate heaven where chocoholics can watch from the manufacturing viewing room and chocolate museum (it explores the history of chocolate) in a 1931 Californian Bungalow Located on the Bass Highway between Devonport and Latrobe. "When you visit the House of Anvers you can see our qualified confectionery staff tempering, moulding and enrobing fine couverture chocolates, truffles, pralines, fudges and more. Check out http://www.anvers-chocolate.com.au or tel: (03) 6426 2958.

* Prior to European settlement the area around Latrobe was occupied by

* The first European to settle in the district was Edward Curr, then the manager of the Van Diemen's Land Company, who established North Down (which now lies between Latrobe and Port Sorell) in 1826.

* In 1845 Thomas Johnson and Dolly Dalrymple moved to the Mersey Valley where they built Sherwood Hall in 1848-1850. Through property acquisition, Johnson became one of the largest landowners in the district. He also owned two hotels, a coal mine and a timber exporting business.

* In 1855 Bells Parade was named after Robert Bell who established a wharf and store on the shore of the Mersey River.

* The township was formally named in 1846 after Charles Joseph La Trobe, the acting Lieutenant-Governor of Van Diemen's Land (1846-47).

* For most of the 19th century it was the most important town on the north coast, outstripping Devonport as a major trading centre.

* Latrobe was Tasmania's third largest settlement between 1870-95. It had a hospital, three newspapers and a large number of inns and hotels.

* A local brass band was formed in 1872. It claims to be the oldest continuously playing band in Australia.

* A visiting English cricket team played on the local oval in 1888.

* The arrival of the railway line in 1889 was important but did not prevent the inevitable growth of Devonport as the North Coast's major port.

* In 1891 the world's first woodchopping championship was held in Latrobe.

* By the early 1900s Devonport had evolved into an important north coast port and Latrobe was in decline.

* In 1906 the Latrobe Council was established.

* Paper mills were established in the 1970s.

The town has a useful and detailed website. Check out http://www.latrobetasmania.com.au for additional information. 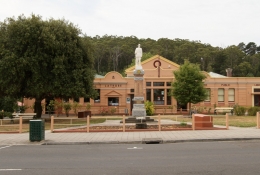 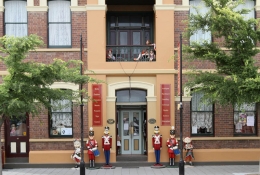 An interesting toy and antique shop in the main street. 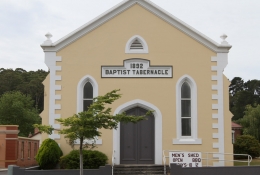 The Baptist Tabernacle in the main street. 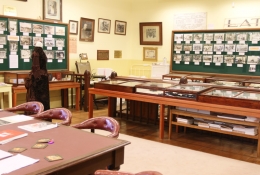 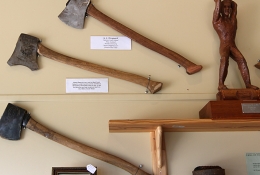 Exhibits at the Axemans Hall of Fame. 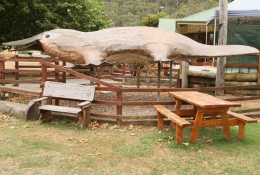 The Big Platypus outside the Axemans Hall of Fame. 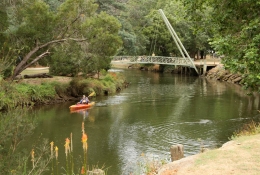 Canoeing on the Mersey River at Latrobe