Loch is a beautiful, historic town set in a valley of the foothills of the Strzelecki Ranges. The surrounded by rolling hills are characterised by deep, rich soil and the area has a consistently high rainfall. Today, partly because it is an easy day trip from Melbourne, it has a thriving craft community with a number of cafes, craft shops and antique shops on its charming, tree lined main street, Victoria Road.

Loch is located 108 km south-east of Melbourne via the M1 and South Gippsland Highway.

The town was surveyed and named after Sir Henry Loch, the Governor of Victoria between 1884-1889. In recent times it has become known as Loch Village.

Loch Brewery & Distillery
Located at 42-44 Victoria Road in the impressive Union Bank building (1902), the cellar door for the Loch Brewery & Distillery is open Friday, Saturday and Sunday from 11.00 am - 4.00 pm. It sells traditional style beers made from Australian and New Zealand malted barley and, from the distillery, gins, a vodka and a single malt whisky. For more details check out https://lochbrewery.com.au.
The building has been described as: "The former Union Bank of Australasia is a two storey red brick structure with a transverse parapet gable roof. The residence is contained within the upper floor and a parallel single storey gable and skillion at the rear. It is set back from the front, but is built up to the side street with a wide garden area to the opposite side. The upper and lower floors are separated by a wide roughcast spandrel below the upper windows (now rendered smooth at the front). The façade is symmetrically arranged with a wide three centred arch window (now missing the original frames and sashes) on either side of the rendered central door panel on the ground floor and a pair of narrow double hung windows on either side of a central window in the upper. The eaves are projected over the upper floor further reducing its height. The wide central door panel is capped with ogee scrolled hood moulds contained within the rendered spandrel. It originally had a semi-circular arched entry with Lombardic moulds to a recessed porch. A large tabbed and corbelled brick chimney, with terra cotta pots, is located slightly to west of centre in the front plane of the roof. The end elevations with rendered bands at the upper level are articulated by a gable end octagonal pier extending above the parapet ridge and flanked by slotted louvre vents. A pair of symmetrical windows is located in each floor. The secondary rear gable is treated similarly but without the central pier and with only one central window. The two gable parapets and the parapet to the rear skillion are capped at their eaves levels with rendered spheres. At the east side, there is a projecting entry to the residence, built in, possibly in the interwar period." It was designed by Walter Richmond Butler."

Loch Village Walk
There is a pleasant and easy 500 metre walk (it takes about 20 minutes return) which starts in Sunnyside Park in the main street (Victoria Road) and then passes through the picnic grounds, through the railway tunnel which has Giant Earth Worm information and passes the South Gippsland Tourist Railway siding. It crosses the Loch-Poowong Road before ending at the Loch Recreation Reserve, just near the impressive suspension bridge which crosses Allsop's Creek. There is a useful map at https://www.visitpromcountry.com.au/walking-cycling/loch-village-walk.

Poowong Sculpture Park
Located on the Poowong-Nyora Road at 71 Nyora Road, the Poowong Sculpture Park is a pleasant. park which contains a number of old wooden sculptures which are designed to "reflect early settlement and the importance of livestock to our rural community". It was created from cypress trees which once grew on the site. It has impressive views of South Gippsland.

* By the early 1880s land in the area was being taken up by settlers.

* The plan to establish the Great Southern Railway from Dandenong into South Gippland led to a townsite being surveyed and named.

* In 1887 town allotments were offered for sale.

* A general store was opened in 1888. That year saw the construction of the local Anglican church.

* In 1889 a local newspaper was published and a school and hotel were opened.

* The railway from Tooradin to Loch reached the town in 1890.

* In 1891 a livestock saleyard was established in the town.

* By 1903 the town had two banks, a Mechanics Institute, and a public library. The population of the town was 200 people and there were 750 living in the district.

* By 1924 the local chapter had built their own Masonic Hall.

* The town was connected to electricity in 1930.

* An infant welfare centre was established in 1939.

There is a useful site. Check out https://www.visitpromcountry.com.au/towns/loch. 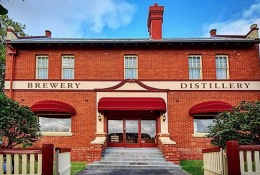 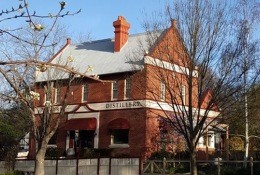 Spring in Loch in front of the Loch Brewery & Distillery building