Maleny, Flaxton, Mapleton and Montville are a series of attractive and popular hinterland tourist towns behind the Sunshine Coast.

Maleny is an overtly tourist town on the southern edge of the Blackall Range with dramatic views across to the Sunshine Coast and to the Glass House Mountains. In the 1980s it attracted  sculptors, painters, craftspeople and potters who provided the local galleries with their works. Soon the galleries and craft shops were complemented by cafes, coffee lounges and restaurants. Today the town is permanently busy on weekends with daytrippers. The reasons are simple. The  Blackall Ranges rise sharply behind Nambour. The air is cool and fresh. The views are panoramic. The edge of the range means that as the visitor drives towards Maleny and Montville they can pause and admire the verdant mountains and valleys to the west and the broad coastal plain and Pacific Ocean to the east. The area is dotted with gracious gardens and small national parks (all protecting remnants of rainforest and many with dramatic and beautiful waterfalls) and there is an abundance of boutique accommodation and chic eateries.

Maleny is located 95 km north of Brisbane in the hinterland behind the Sunshine Coast. It is 436 m above sea-level.

There are two possible explanations for the naming of Maleny and both of them are spelling mistakes. One theory argues that it was named Maleny because the Balfour brothers, who established the Colinton Station in 1841, were surveyors and they named Malleny Mountain on the Blackall Range after the tiny Scottish town of Malleny. Alternatively it was named after a surveyor named Maloney who worked in the local area. Either way the spelling was pretty bad. It is either Maleny but should be Malleny or Maleny and it should be Maloney ... but never Maleny.

Maleny Botanic Gardens
This is the perfect location for a special botanic garden. The rainfall is high. The weather is perfect. The Maleny Botanic Gardens are perched on the edge of the southern escarpment just beyond the turnoff to Mountain View Road and, as their brochure explains, they are "a panorama of waterfalls, ponds, colourful plantings and manicured lawns". The area currently under 'cultivation' is 3.2ha but the total property is 44.5ha and there are on-going plans to expand. Wander through the gardens and you will have the surrounding rainforest and the Glass House Mountains as a backdrop. There are 4km of walking paths and the plants, of which there are now thousands, range from roses and azaleas to rare Queensland cycads and rainforest orchids. The gardens are located at 233 Maleny Stanley River Road, tel: Check out the website http://www.malenybotanicgardens.com/ for details. They are open seven days from 9.00am-4.30pm, tel: 0400 091 731 or (07) 5408 4110.

Galleries, Studios and Specialty Shops
One of the main reasons people visit Maleny and the surrounding towns is the profusion of galleries in the area. The area is noted for the high quality of its art works - starting in the 1980s it has been a magnet for artists - and consequently a walk through both Maleny and Montville will reward even the most discriminating art lover with reasonably priced works of considerable merit.

Mountain View Road
Visitors wanting to enjoy both a walk through the rainforest and the panoramic views across to the Glass House Mountains should simply drive along Mountain View Road (there is a good map available at the Visitor Information Centre) where both McCarthy's Lookout and Mary Cairncross Park are easily accessible.

(a) McCarthy's Lookout
Gasp at this near-perfect view of the Glass House Mountains. There, across the flat lands below, lie a series of volcanic plugs formed of rhyolite and trachtyte. These were lavas which hardened inside the vents of tertiary volcanoes 25 million years ago. Not surprisingly they have been eroded and reduced over time. The highest and most prominent peak is Mount Beerwah (555 m) and it is easy to identify Coonowrin (377 metres), Ngungan (253 metres) and Tibrogargan (364 metres). This is one of the most memorable views in the country. Conveniently the signage at the lookout identifies each of the volcanic plugs.

Howells Knob Lookout
Another superb vantage point near Maleny is Howells Knob Lookout which at 561m is one of the highest points in the Blackall Ranges. It offers excellent panoramic views of  the Glass House Mountains, the Sunshine Coast and, on a clear day, Moreton Island and Bribie Island. To reach the lookout head west from Maleny along the Maleny-Kenilworth Road (Macadamia Drive) for about 2 km and turn left into Reesville Road and follow the signs.

Lake Baroon/Baroon Pocket Dam
Lake Baroon, which is formed by the Baroon Pocket Dam, was completed in 1989. It covers 380 ha and is the main source of water for Caloundra and Maroochydore. It is used for recreational purposes such as swimming, fishing (it is stocked with Mary River cod, bass, golden and silver perch), sailing and canoeing. Motorised boats must be electric. There is no use of fossil fuel vessels on the lake. Near the spillway there is a viewing platform. From the car park below the spillway there is a 2.4km walking circuit into rain forest and along Obi Obi Creek Gorge. If you are really keen you can keep walking to Kondalilla Falls  and the Montville Road. See http://www.nprsr.qld.gov.au/parks/great-walks-sunshine-coast/pdf/lake-baroon-map.pdf for a useful map.

Montville
Today Montville is an in-your-face tourist town which, while beautifully located on the ridge of the Blackall Range, is overwhelmed by gift shops, cafes, tea houses and galleries. Whereas Maleny feels like an Australian town, Montville has a European mountain village ambience created by quaint "olde world" cottages, mock Tudor facades, a large water-wheel and even chalets which look as though they have been lifted out of Austria or Bavaria or Switzerland. Check out http://www.hinterlandtourism.com.au/towns/montville-flaxton for more information about accommodation and eating.

The Park has impressive stands of Bunya Pine and the local fauna includes the rare spotted tailed quoll, the peregrine falcon, the red goshawk as well as reptiles, insects and frogs.

Flaxton Barn
The Flaxton Barn was built in the 1920s. Originally it was used as a pineapple packing but it has also housed a miniature model railway and a silversmith. Devonshire Teas were introduced in the early 1970s and are still the main drawcard although it now also has antiques and collectables, boutique wines and gourmet foods and a cafe serving light meals. It is located at 445 Flaxton Drive and is open from 9.00am to 5.00pm daily (except Wednesdays), tel: (07) 5445 7321 and http://www.flaxtonbarn.com.au.

There are a number of walks in the park (see http://www.nprsr.qld.gov.au/parks/mapleton-forest/about.html for more details) but the most impressive, in terms of views of waterfalls and valleys, are:

(1) The Mapleton Falls Walk - the lookout near the falls offers excellent views over a valley of wet eucalypt and dense rainforest that once covered the Blackall Range.

For a good downloadable map check out http://www.nprsr.qld.gov.au/parks/mapleton-falls/pdf/parkmap-kondalila-mapleton.pdf

* The area was once occupied by the Nalbo and Dallambara peoples of the Gubbi Gubbi nation who each year gathered at Baroon Pocket on the banks of the Obi Obi River to feast on Bunya nuts. The explorer Ludwig Leichhardt witnessed one of these gatherings and described it as "This plain they call Booroon ... seems the rendezvous for fights between the hostile tribes who come from near and far to enjoy the harvest of the Bunya". In fact it was an annual gathering of Aborigines from as far away as the Gold Coast and the Darling Downs.

* By the 1850s timber cutters had moved into the district and for the next few decades the primary industries were timber cutting and sawmilling. Not surprisingly when it came to naming Maleny's streets the timber industry was acknowledged with streets named Maple, Myrtle and Cedar. By the 1870s the district had a timber mill and a blacksmith.

* On 13 November, 1878 Isaac Burgess selected land on the present site of Maleny. It was the beginning of a period when dairy and beef cattle were grazed on the rich grasses which resulted from the substantial annual rainfall and the rich red volcanic soils.

* Although dairy farming dominated the local economy (a butter factory was opened in in 1904 and a second factory in 1912) the area became increasingly focussed on mixed farming with small crops and orchards replacing the pasturelands.

* Maleny remained a rural service town until the 1980s when retirees, seeking a cool alternative to the coast, moved in and started building large houses on one and two acre lots. This evolved into the town becoming an arts and crafts centre with a dominant alternative lifestyle. Perhaps the best symbol of this alternative lifestyle was the town's passionate attempt to resist the arrival of a Woolworths supermarket in the early years of the twenty-first century.

The University of Queensland site offers detailed historic information about the area - http://queenslandplaces.com.au/maleny. As well there are a number of useful local sites including http://www.hinterlandtourism.com.au/towns/maleny, http://www.malenyguide.com.au/ 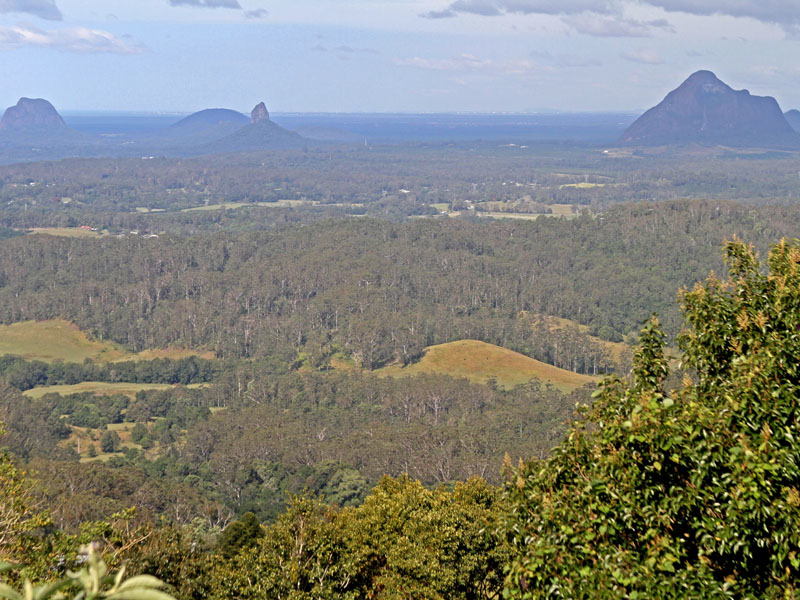 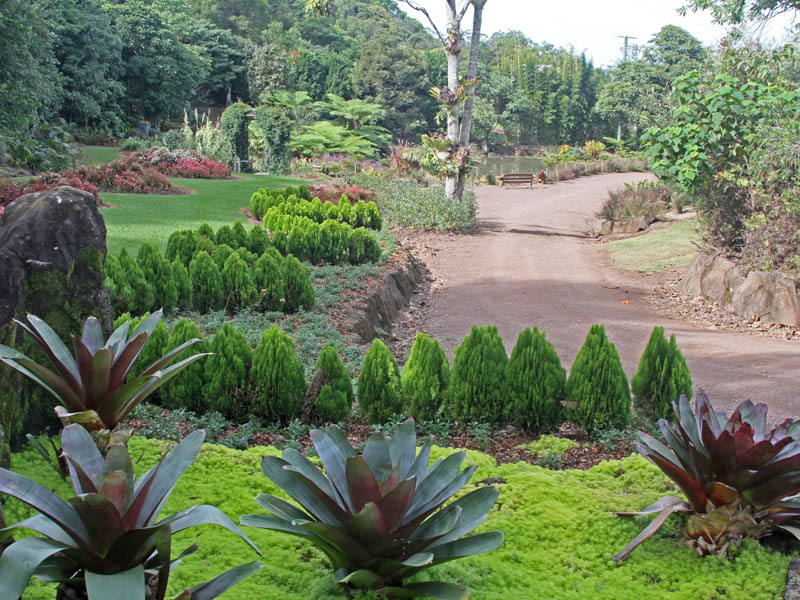 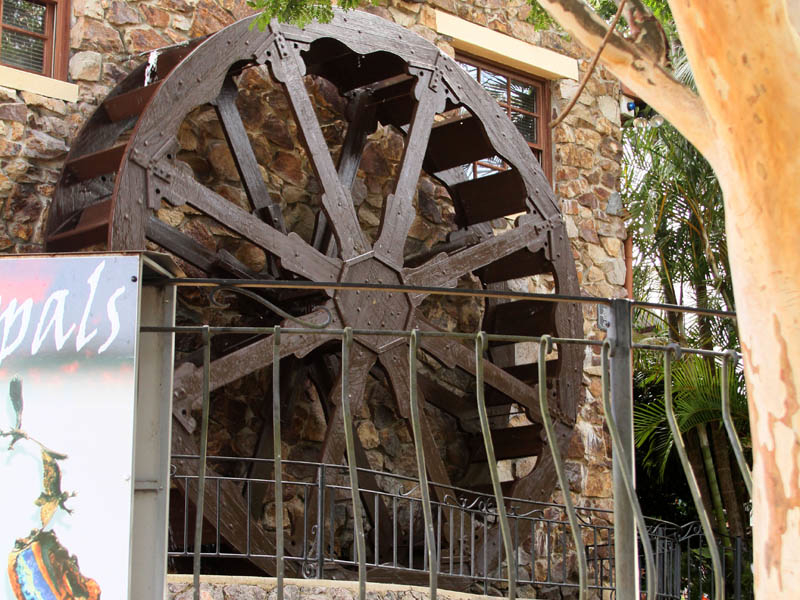 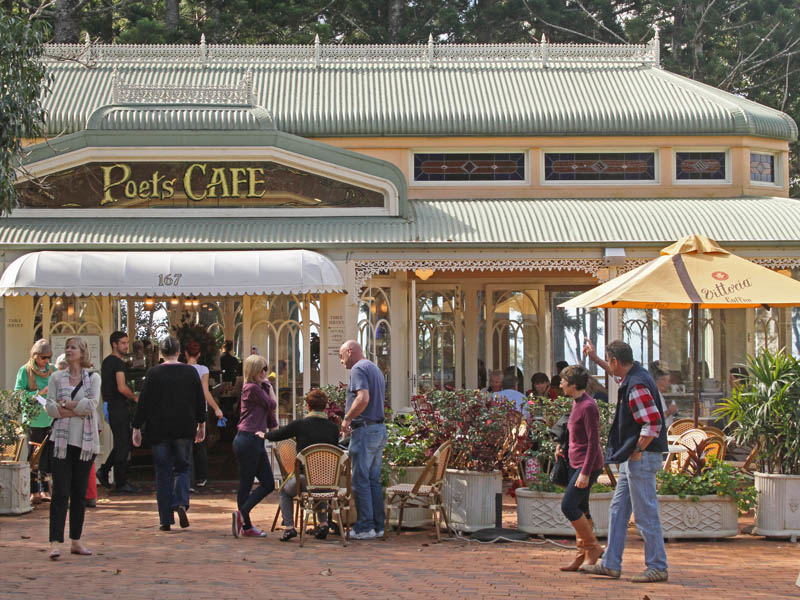