Town on the Macquarie River which promotes itself as the 'Town of Champions'.

Narromine is an important rural service centre located on the Mitchell Highway and the Macquarie River at the eastern edge of the western plains of New South Wales. Wheat, citrus, fruit, vegetables, fat lambs, wool and cotton are the economic raison d'etre of the shire. Narromine promotes itself as the 'Town of Champions' because of the large number of international sports stars who have grown up in the town including sprinter Melinda Gainsford-Taylor, cricketer Glenn McGrath and footballer David Gillespie.

Narromine is located at the junction of the Mitchell and Newell Highways, 430 km north-west of Sydney via Mudgee and Dubbo. It is 45 km west of Dubbo and 238 metres above sea-level.

Narromine was named after a corruption of a Wiradjuri word said to mean, 'place of many lizards' or 'place of honey'. The word 'Narramine' was the name of a local property.

Narromine Museum and Meeting Place
The old Court House, located on Burraway Street between the visitor information centre and the police station, is the town's museum. It has displays of local Aboriginal artefacts and equipment used by the early settlers. It is open Monday, Wednesday, Friday and Saturday, from 10.00 am - 1.00 pm. Tel: 0467 873 070.

Glenn McGrath Statue
Located in the Tom Perry Park on the Mitchell Highway, the Glenn McGrath statue, created by local sculpture Brett Garling and unveiled in 2009, celebrates the town's connection with the most successful fast bowler Australia ever produced. McGrath was born in Dubbo and educated at Narromine Public School. He honed his bowling skills by bowling at a fuel drum that sat against his dad’s machinery shed. He holds the world record for the highest number of Test wickets by a fast bowler and is fourth on the all-time list of bowlers.

Parks and the Macquarie River
Rotary Park, on the banks of the Macquarie River at the northern end of town, has picnic, barbecue, toilet and childrens' play facilities, as well as a boat ramp for anglers, boating enthusiasts and water skiers.

Narromine Wetlands
Located on the Narromine-Tullamore Road, on the outskirts of town, the wetlands (a natural stormwater catchment) provide an excellent habitat for birds, frogs and other wetland inhabitants and are an ideal location for a picnic.

Narromine's Historic Pubs
Narromine has four hotels which are over 110 years old. The single storey Royal Hotel, in Dandaloo Street, was built in 1890 and was an old Cobb & Co stopping point. The Narromine Hotel, also in Dandaloo Street, was built as the Federal Hotel in 1901 and has some particularly attractive ironwork on the upper veranda. It is a classic turn of the century country hotel. The Imperial Hotel in Burroway Street dates from 1883 and the Court House Hotel, with its elaborate ironwork veranda, dates from 1899.

Narromine Aviation Museum
Gliding and flying attract large numbers of people to the area every year. The local aerodrome (4 km west of town, on the Mitchell Highway) houses the nation's oldest country aero club. The club, which has played host to personalities as diverse Charles Kingsford Smith, Charles Ulm, Chuck Yeager and Nancy Bird Walton was established shortly after World War I. Nearly 3,000 pilots were trained here during World War II when the aerodrome was commandeered by the Department of Defence.
The Narromine Aviation Museum tells the story of a century of aviation in the Narromine area. The exhibits include the scrapbook from the Aero Club; a collection of photographs from the 1920s and 1930s of the visitors to the airport; a Rolls Royce Merlin 25 aero engine; a diorama model of the aerodrome during World War II and "Displayed in the museum's new wing are three aircraft believed to be unique in the world:
* The only flyable replica of the 1907 Wright Flyer Model A (2005);
* An original Corben Super Ace homebulit (1938);
* An original Hawkridge Venture glider (1953)."
The Museum is open from 10.00 am - 4.00 pm six days a week (closed Tuesdays), tel: (02) 6889 7131. Check out http://www.narromineaviationmuseum.org.au.

Gin Gin Weir
Located 35 km from Narromine on the Old Trangie Road, the Gin Gin Weir was built in 1896, is now used to supply water to the surrounding cotton farms, and is recommended for fishing (not swimming or camping) particularly for Murray Cod and provides small boat access. For more information check out http://rivertrails.com.au/wordpress/rivertrails/river-trail/gin-gin-weir-reserve. Brochures are available from the Trangie Caravan Park. There is good fishing advice at http://www.fishingmonthly.net.au/Articles/Display/4967-Cod-on-Dubbos-doorstep.

Narromine Iris Farm
Located 5 km south of Narromine, on Parkes Road, is Narromine Iris Farm with over 1200 varieties of tall bearded iris, as well as Louisiana and Spuria iris, day lilies, cannas and geraniums. There is a pleasant shaded picnic area. The flowering season is from October to November and it is best in mid-October. It is open Sunday to Friday, tel: (02) 6889 1885.

Goobang National Park
Located 95 km south east of Narromine, via Tomingley, is the Goobang National Park. There are three areas that are easily accessible by 2WD:
(1) Wanda Wandong Camping Area
The Wanda Wandong camping area has toilets, picnic tables, wood and gas barbecues. It is possible to access Caloma Trig Lookout from the Camping Area via Eastern Boundary Trail and Pipe Clay Creek Trail.
(2) Caloma Trig Walking Track
Located 140 m from Caloma Trig Lookout, this is a short easy walk which connects to Sawpit Gully Trail offering occasional glimpses across the park. 1 km, 30 minutes  one way.
(3) Burrabadine Peak Walking Track
The more secluded Greenbah Creek Camping area is nestled amongst the Box Gum Woodland trees. On site are picnic tables, BBQ rings and a toilet. Burrabadine Peak Walking Track is located 900 m south of Greenbah Creek Camping Area. It passes through Red Stringybark, Red Ironbark and Red Gum woodlands to reach the Peak which offers panoramic views of the countryside. The walk is 4 km return and takes 90 minues - 2 hours.
There is a useful, downloadable brochure with a map at http://www.environment.nsw.gov.au/resources/parks/brochures/120166GoobangNPBrochure.pdf. The park is alive with interesting fauna. It is possible to see red-necked wallabies, swamp wallabies, eastern grey kangaroos and echidnas. In the summer months there are lace monitors, blue-tongued lizards, shingle backs and bearded dragons and, at night, boobook owls, nightjars, possums and bats.

Cobb & Co Heritage Trail
In 2004 the legendary coaching company, Cobb & Co, celebrated the 150th anniversary of its first journey and the 80th anniversary of its last. The company's profound contribution to Australia's development was celebrated with the establishment of a heritage trail.
Cobb & Co's origins lay in the goldrushes of the early 1850s. At its peak Cobb & Co coaches were travelling 28,000 miles (44,800 km) a week. They had a total of 30,000 horses and were harnessing 6,000 horses every day. There was a total of 7,000 miles (11,265 km) of regular routes throughout Australia and the web of routes from Bathurst to Bourke were part of 2,000 miles (3,218km) of coach routes which stretched from southern Victoria to the Gulf of Carpentaria and criss-crossed eastern Australia.
The Cobb & Co Heritage Trail booklet explains that "known as 'whips', or Jehus, the drivers were Australia's heroes of the 19 th century. They had to contend with heat, dust, bush fires, flies, mosquitoes, rain, fog, bog, snow, snakes, kangaroos, bushrangers, difficult passengers and post office schedules which demanded the mail be on time or a heavy fine would ensue . . . Horses were changed every 16 miles (25.6 km) or so at changing stations, sometimes combined with bush shanties or inns where the passengers could get a meal, drink, or a few hours sleep."
In Bathurst at the city's Visitor Information Centre there is a repainted, polished and gleaming Cobb & Co coach which looks as though it came out of the city's coach factory yesterday. In reality it dates back to the 1870s and the restoration is the work of Don Burns of Narromine, a coach builder by trade, who took 18 months to restore it to its pristine condition.
Cobb & Co sites in Narromine include the old blacksmith's shop, the Narromine Hotel, the Royal Hotel (where passengers once stayed) and Narromine Cemetery, where two former coach drivers are buried. Sites within the shire include Dandaloo, Gin Gin Bridge, the Timbrebongie Hotel, Tomingley, Trangie and Weemabah.

The stranger came from Narromine and made his little joke--
"They say we folks in Narromine are narrow-minded folk.
But all the smartest men down here are puzzled to define
A kind of new phenomenon that came to Narromine.

"Last summer up in Narromine 'twas gettin' rather warm--
Two hundred in the water bag, and lookin' like a storm--
We all were in the private bar, the coolest place in town,
When out across the stretch of plain a cloud came rollin' down,

"We don't respect the clouds up there, they fill us with disgust,
They mostly bring a Bogan shower -- three raindrops and some dust;
But each man, simultaneous-like, to each man said, 'I think
That cloud suggests it's up to us to have another drink!'

"There's clouds of rain and clouds of dust -- we've heard of them before,
And sometimes in the daily press we read of 'clouds of war':
But -- if this ain't the Gospel truth I hope that I may burst--
That cloud that came to Narromine was just a cloud of thirst.

* The area was occupied by tribes of the Wiradjuri people prior to white settlement.

* The explorer John Oxley passed through the district in 1818 during his exploration of the Macquarie River.

* Squatters entered the area in the 1830s and settled along the river.

* 'Narramine' station was taken up in 1835. For many years it was held by William Charles Wentworth, the explorer who crossed the Blue Mountains in 1813.

* A government reserve had been made in 1849

* A coach containing the Commissioner for Crown Lands, John Grenfell (after whom the town of Grenfell was named), was held up by bushrangers in 1866. When he refused to bail up and drew his pistol, shots were exchanged and the bushrangers fled unrewarded though Grenfell was wounded and died the next day.

* The railway arrived in 1882. At that time, William O'Neil was the owner of 'Narramine' and he had established a hotel at the junction of the road to Trangie and the road to Warren.

* The township developed around the railway. It was laid out and gazetted in 1883.

* The streets were named after early pastoral holdings in the area. A pump station and pump attendant's house were built near the hotel to supply water to the trains at what was the last natural watering place before Bourke.

* In 1890 a police station was built and O'Neil established a store near the railway. The Royal Hotel was built that year.

* The first newspaper was established in 1896 and the spelling of the town was changed from 'Narramine' to 'Narromine' owing to a misspelling by the paper's editor.

* In 1898 the town was declared a municipality and a courthouse and lock-up were built adjoining the police station.

* In 1900 the name of the local Post Office changed from Narramine to Narromine.

* The establishment of a citrus orchard in 1913 signified the start of another major local industry.

* The Narromine aerodrome, constructed after World War I, is home to the oldest country aero club in the Australia.

* Over 2000 pilots lived and trained in Narromine during World War II.

There is a useful Shire Council website. Check out http://www.narromine.nsw.gov.au. 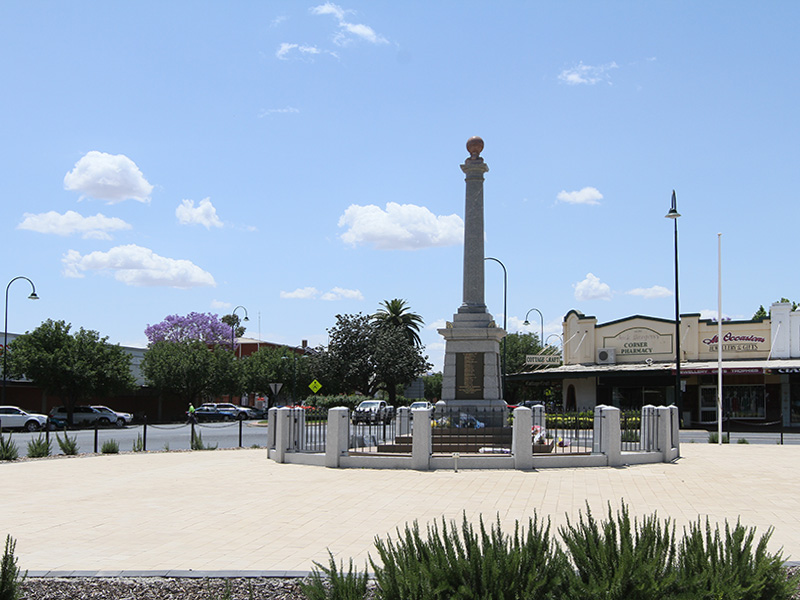 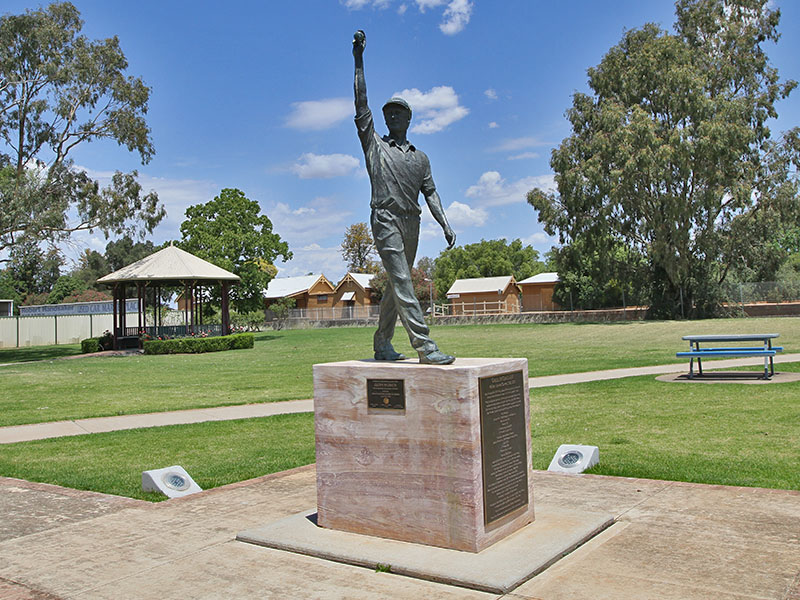 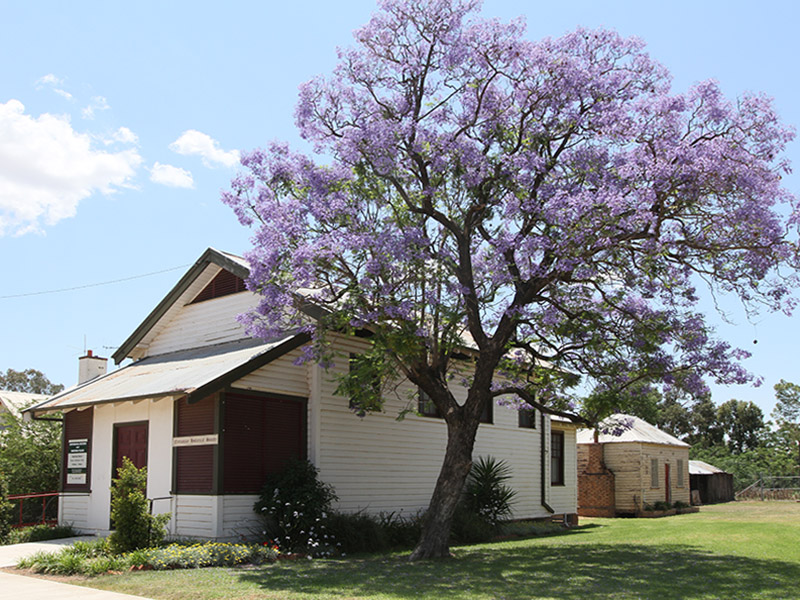 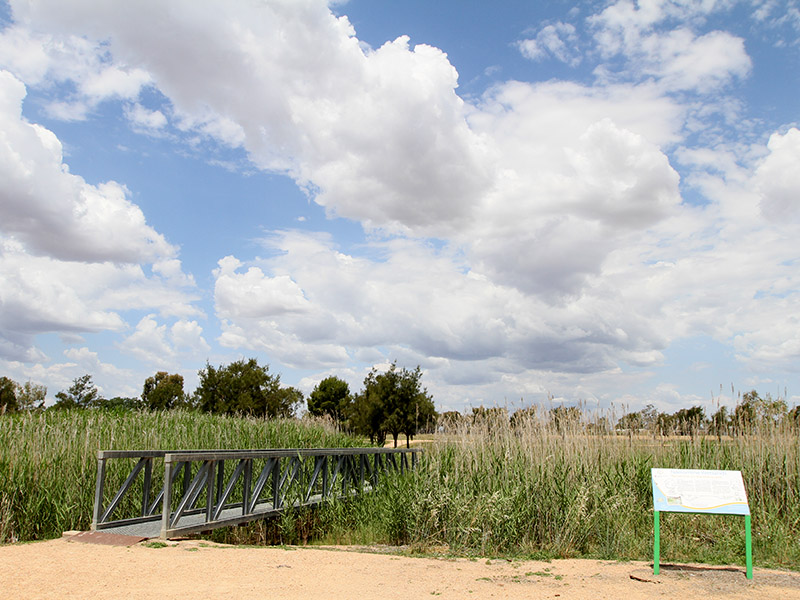 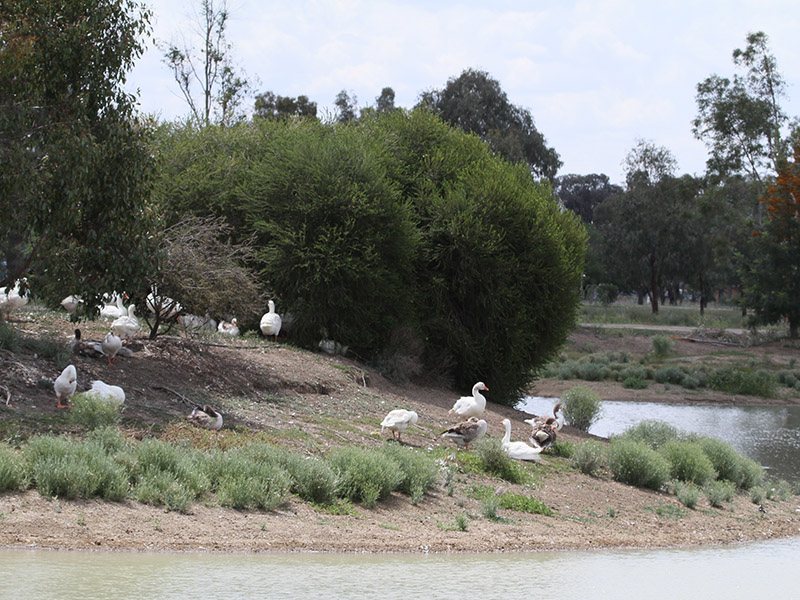 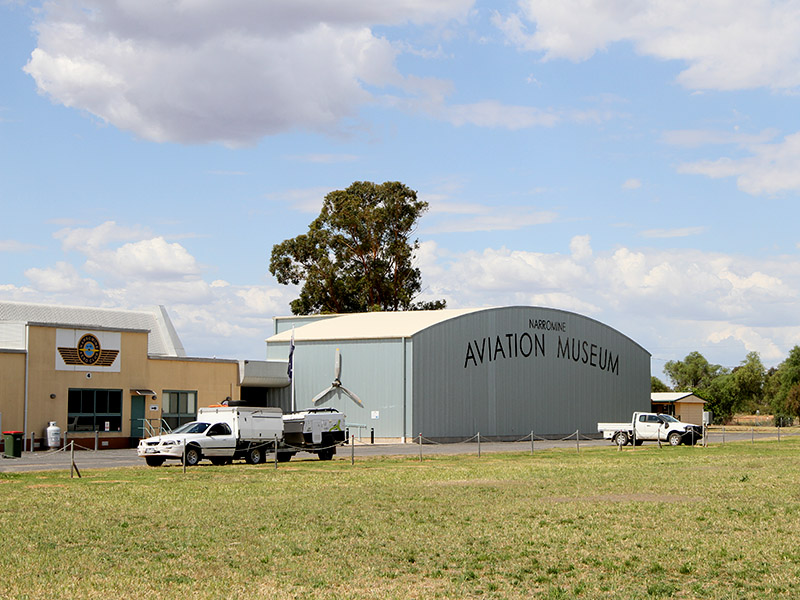 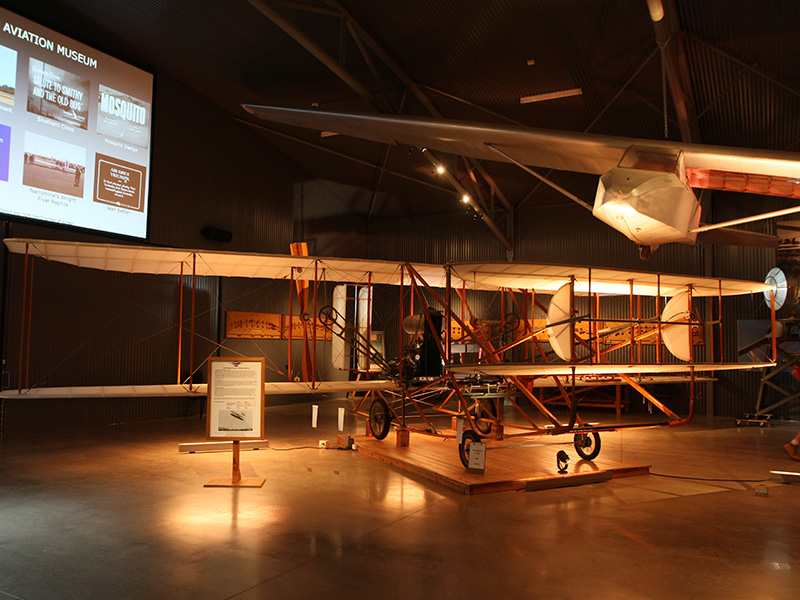 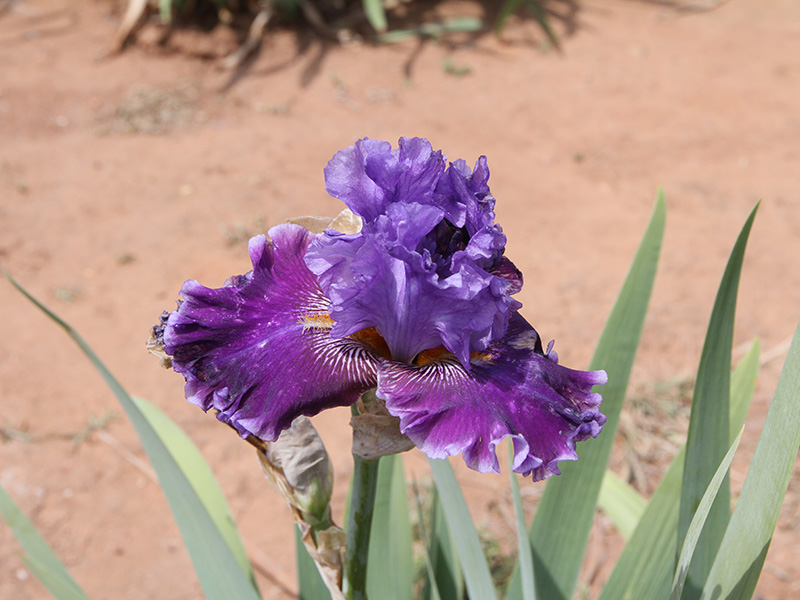