Oodnadatta is a suitably wild outback town which lies in the heart of the desert 112 m above sea level. It is, by any definition, a fascinating place which, since the closure of the railway line in 1981, has become a quiet settlement inhabited mainly by the local Aborigines who now run the Railway Museum, the General Store and the local Transcontinental Hotel. It is well known that the Oodnadatta Track, that famous old dirt road from Marree to Marla, predates the arrival of Europeans by tens of thousands of years. It was a trade route for the local Aborigines who moved from spring to spring along a route which was eventually to be used by both the Overland Telegraph Line and the railway to Alice Springs. Today Oodnadatta is a place which attracts people more for its exotic name than for any "must see" attractions. The Pink Roadhouse is a place to stop and the museum, in the old railway station, offers an insight into the hardships endured by Europeans who ventured into this inhospitable land.

Oodnadatta is located 1045 km north of Adelaide and 198 km north-east of Coober Pedy. It lies in the heart of the desert and is 112 m above sea level.

Oodnadatta is probably an adaptation of a local Arrernte Aboriginal word "utnadata" meaning "blossom of the mulga".

The Pink Roadhouse
The Pink Roadhouse was created by Adam Plate and Lynnie Trevillian in 1983 as Oodnadatta Traders. It was when Adam painted a 1969 Dodge Phoenix pink and parked it out the front of the store that they took the next step, painted everything pink, and called the store the Pink Roadhouse. Today it is a legendary general store which offers mail deliveries, a caravan park, fuel, roadside services and a toll free phone. It is run as a service to the town and to the traveller. The proprietors are eager to help everyone who arrives. They make excellent hamburgers and have plenty of supplies. They are also a source of all knowledge regarding the condition of the roads and it is well worthwhile phoning 1800 802 074 or (08) 8670 7822 before heading out on the Oodnadatta Track. Check out http://www.pinkroadhouse.com.au for detailed information about this unique roadhouse.

A Remnant of the Overland Telegraph Line
The first European to pass through the Oodnadatta area was the remarkable explorer, John McDouall Stuart, who was so gifted and instinctively correct, that not only was he the first European to make the journey from north to south across the continent (he effectively beat Burke and Wills) but the route he mapped in his journeys from 1857 to 1862 was so sensible, efficient and practical that it was adopted as part of the Overland Telegraph Line route. To the north of the town it is still possible to see some of the old telegraph posts which cut through the loneliness of the outback. Work on the Overland Telegraph Line began in September 1870 and by January 1872 this section was completed. On 22 May 1872 the first message was sent from Darwin to Adelaide. The contractor, E. M. Bagot, was responsible for the 800 km of telegraph line north from Port Augusta. He was paid £41 per mile.

Alberrie/Mutonia Sculpture Park
Located on the Oodnadatta Track between Marree and Oodnadatta, the Mutonia Sculpture Park at Alberrie Creek is a collection of huge sculptures in the desert all of which were created by Robin 'Mutoid' Cooke who started with The Giant Ragweed, then Plane Henge, two planes standing erect on their tails, and followed with Dream Catcher, Spinning Car and Time Tree. Beside the Track is the 'Dingo'. The original concept was 'Dottie the Dingo', but since then the locals have dubbed it the 'Big Dog'. The dog's body is an old water tank from the days of the steam train, and its head is a classic Chrysler. There are two useful YouTube segments: https://www.youtube.com/watch?v=l53qID5AB0E&feature=youtu.be which tells the story of the sculpture park and https://www.youtube.com/watch?v=nRK7_CpeeAw which was a Tropfest entry.

* Prior to the arrival of Europeans the area was home to the Arabunna people. Today the town has people with Arrernte, Antakarainnja, Loritja and Pitjantjatjara family ties.

* John McDouall Stuart explored the region in 1859. The route mapped by Stuart in his journeys of 1857 to 1862 was adopted as part of the Overland Telegraph Line route.

* During the 1870s millions of hectares of land in the area were taken up as pastoral leases.

* Work on the Overland Telegraph Line began in September 1870 and by January 1872 the section on either side of Oodnadatte was completed.

* In 1874 the explorer John Forrest, having journeyed from Geraldton in Western Australia to the Overland Telegraph Line, camped beneath a large box tree some 8 km north of Oodnadatta at Angle Pool Waterhole on a branch of the Neales River.

* Oodnadatta was proclaimed a Government Township on October 30 1890.

* On 7 January 1891 the railway line from Warrina to Oodnadatta was opened. Around this time artesian water was located and permanent waterholes supplied by natural springs were tapped.

* By 1893 there were 400 camels. Some camel teams travelled 900 miles north to Newcastle Waters. They also carried mail regularly between Oodnadatta and Alice Springs.

* The Oodnadatta Medical Hostel (now the Australian Inland Mission Hospital) was opened at the cost of £653 in 1911.

* In 1928 the railroad was extended further northward and Oodnadatta lost some of its former importance as a railhead.

* The last Ghan train departed from Oodnadatta in 1980. However the local Aboriginal community were determined to retain the town as their home. It is now predominantly an Aboriginal settlement. The local school has four teachers.

* Today Oodnadatta is one main street with the Transcontinental Hotel, the General Store and the Pink Roadhouse on one side and the old railway line and the fascinating Railway Museum on the other side.

There is a useful website with details of the attractions in the area. Check out http://traveloutbackaustralia.com/oodnadatta-track.html. 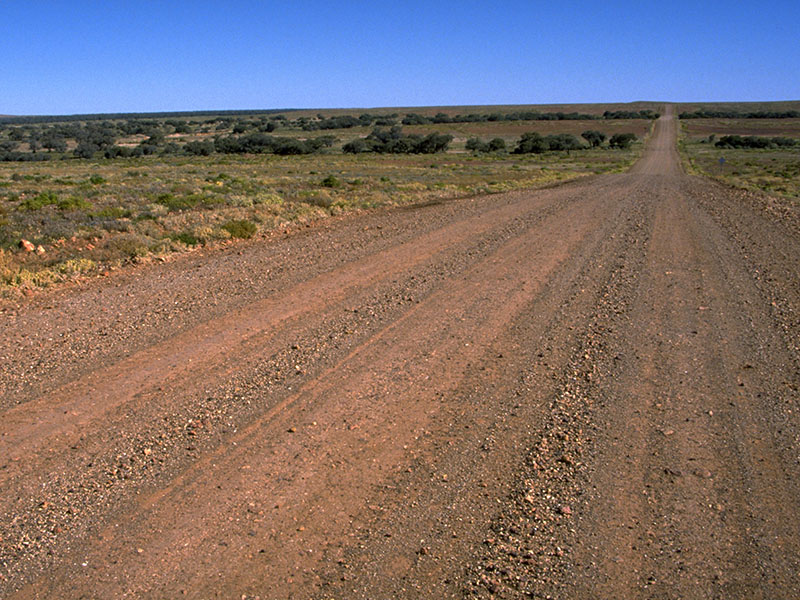 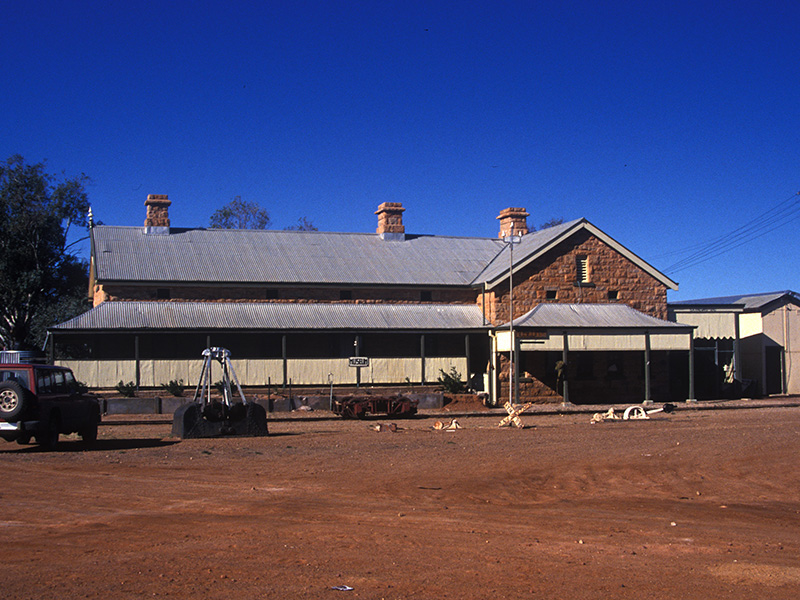 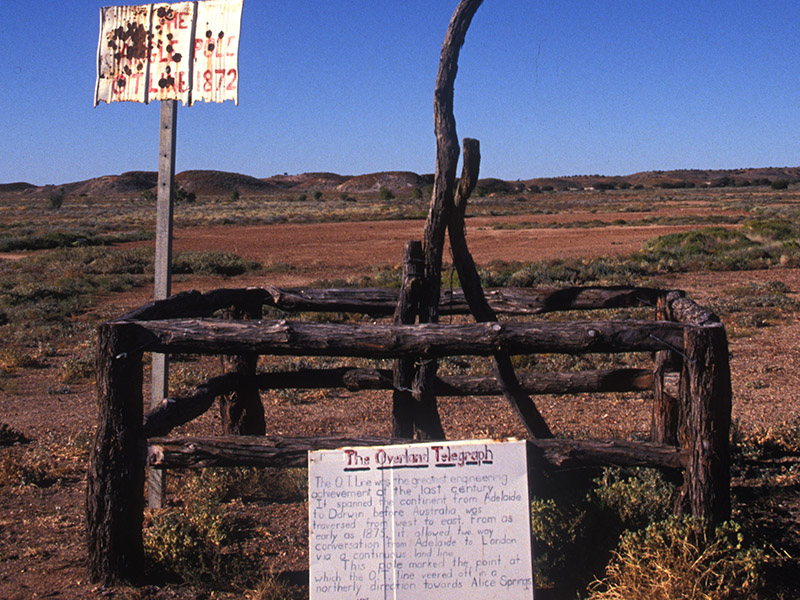 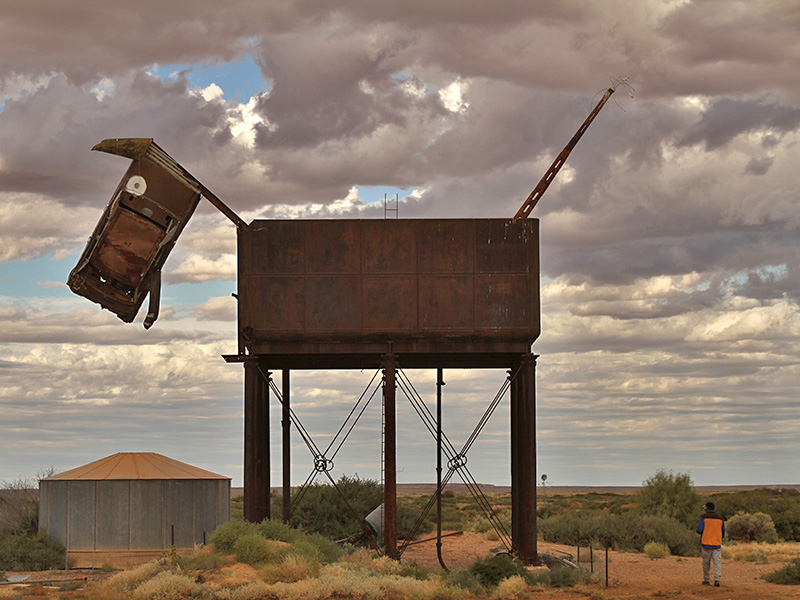