Orroroo is one of those towns where the main street is so wide it now has a pleasant, shady median strip with a small park. It has a reasonable claim to being the widest street in Australia. The town is notable because it is at the crossroads of main roads from both east to west (from Sydney to Perth) and north to south (Adelaide to Darwin) and it is very close to Goyder's Line which was the limit of productive land in South Australia.

Orroroo is located 273 km north of Adelaide via Clare and 100 km south-east of Port Augusta. It is on the southern edge of the Flinders Ranges.

The town was officially named by G. W. Goyder when he surveyed it in September 1875. There is considerable confusion about the meaning and pronunciation of the town's name. The local Aborigines, the Ngadjuri, called the area 'Oorooroo'. No one is sure what the word meant. It may have meant (a) "rendezvous of the magpie" (b) some sort of rapid motion (c) an early start (d) the name of a local Aboriginal girl (e) "place of departure" (f) the sound of the wind blowing through acacia trees or (g) dust (h) a windy locality (i) the name for a creek in the area.

Animal Sculptures
At the entrance to the town, beside the Orroroo sign, are the sculptures of three kangaroos made from corrugated iron. There is also a metal sculpture of two stock horses pulling a plough the District Council of Orroroo and Carrieton commissioned Artworx to supply a mob of kangaroos and a pair of life-sized working horses pulling a plough for what has subsequently become a tourist attraction and focal point at the entry into the town. The work was created by Dudley Siviour who was "teaching metal craft to high school students in the Riverland in 2007 when Artworx offered him the opportunity of showing in public the unique corrugated iron sculptures he was creating as a hobby." For more information check out https://www.artworxgallery.com.au/artworx-artists/2016/1/17/dudley-siviour.

Early Settlers Hut
Located on the corner of Fourth and South Streets is an early example of a clay pug-and-pine cottage which has been well preserved. It is furnished with simple furniture of the period. This cottage has been home for a number of families up until the 1950s and is typical of the early settlers buildings. The curved ceiling partition wall acts an air circulator. The two back rooms were in an earlier day lined with white washed hessian. No one knows exactly when the hut was built but it is thought to date from the late 1870s.

Pekina Creek Walking Trail
There is a pleasant walk from the Lions Park (off West Terrace) along Pekina Creek. Walk towards the Swimming Pool from West Terrace and then proceed south down Pekina Creek. There are some Aboriginal rock drawings (which may be 7000 years old) on the far side of the creek, then there are the springs which provide the creek with regular water and behind them (past the Tank Lookout) is McDonald's rock carving, two poems which were written by a local who was leaving for the United States. If you return and head in the other direction from the swimming pool there is a huge red gum which is reputed to be one of the largest in Australia.

Ruins of Pekina Station and Tank Lookout
Head out of town on Price Maurice Road (it is a continuation of Fourth Street) and there is a sign to the right which points to Tank Hill Lookout, which offers a panoramic view of the town and the surrounding countryside, and further on are the ruins of Pekina Station, the first property in the district. It was started in the 1840s but broken up in the 1870s.

The Post Office
Located at 19 Second Street, the Post Office and Telegraph Station was opened on 11 November, 1880 by the South Australian Postmaster General, Charles Todd. When asked to establish a Post Office in the town Todd is supposed to have observed: "Dear me! There are only two letters in Orroroo. What do you want a post office for?"

Goyder's Line
Located a few kilometres out of town on the road to Port Augusta between Orroroo and Wilmington is a plinth commemorating Goyder's Line. It has a simple plaque which reads: "In 1865 Surveyor General George Woodroffe Goyder marked on the map of South Australia a line delineating drought affected country. The line which passes through this area became an important factor in settlement in this state being regarded as an indication of the limits of lands considered safe for agricultural development.'
Orroroo receives only 325 mm of rain each year. This is typically spread over 79 days. On average the area has 286 days without rain. The story of Goyder's Line, and what it means, is fascinating. An article published in the Adelaide Mail in 1927 spelt out this remarkable and hugely important discovery. Here is an abridged version: "How by following the fringe of the saltbush zig-zag across South Australia from the Victorian border just below Peebinga, north to Melrose, south to Moonta, across Spencer's Gulf, and from Franklin Harbor to the Gawler Ranges, the late G. W.Goyder unerringly separated the land where the rainfall is good from that where it is poor is one of the romances of agricultural development in this State.
Today, though much of the country outside the line has been brought into productivity owing to modern methods of cultivation, the imaginary boundary delineated by Goyder as long ago as 1865 is still recognised by the Lands and Survey office, and as regarded as an infallible guide by pastoralists.
The son of David Goyder, a minister of the gospel, the late G. W. Goyder must be given a foremost place in that gallery of South Australian pioneers ... During the 32 years he was Surveyor-General— from 1861 to 1893— Goyder adopted a bold, progressive policy, which has left an indelible mark on the agricultural history of South Australia ... A harassed Commissioner of Crown Lands asked Goyder, following the great drought of 1865, to make the necessary examination of the country lying to the north of Adelaide to enable him to determine and lay down on the map, as nearly as practicable, the line of demarcation between that portion of the country where the rainfall had extended and that where the drought prevailed.
With characteristic promptitude Goyder set about the task, and by December 6 of the same year presented a comprehensive report to the commissioner in which he observed: — "Had the drought, which unfortunately still prevails, been of an ordinary nature there had been no necessity for my leaving town upon this duty, as the line of demarcation might have been shown from information previously in my possession and specially referred to in my report on the valuation of some of the northern runs. The drought, however, being of an unusually severe nature and extending more generally than any previously known, it became indispensable to add to my previous experience the knowledge of the state of the country as it now exists.''
The result of his investigations, Goyder stated, showed the line of demarcation extended considerably farther south than he had anticipated — the change from the country that had suffered from excessive drought to that where its effect had been only slightly experienced being palpable to the eye from the nature of the country itself. It might be described as bare ground, destitute of grass and herbage, the surface soil dried by the intense heat, in places broken and pulverised by the passage of stock, and formed by the action of the wind into miniature hummocks which surrounded the closely cropped stumps of salt, blue, and other dwarf bushes. Those of a greater elevation were denuded of their leaves and smaller branches as far as the stock could reach. This description, Goyder stated, generally held good of all country upon which stock had been depastured ... Whatever agriculturalists may say about Goyder's line the fact remains that pastoralists still stand by it. It is famous far beyond Australia. A visitor to London in recent years [and remember this was written in 1927] discovered in scientific circles that while not much was known about South Australia the scientists had heard of Goyder."

* Prior to European settlement the area around Orroroo was inhabited by the Ngadjuri Aborigines.

* The first Europeans to settle the area were John and James Chambers who took up the Pekina Run in 1844. It covered 320 square miles (82,800 ha). They stayed for 17 months during which time they had no rain. They eventually sold Pekina for £30.

* The town's first settler was Charlie Easther who arrived in 1864 and opened up an eating house and sheep pen on Pekina Creek. This became a popular stopping point for the drovers and drifters who travelled through the area.

* The town was officially named by G. W. Goyder in September 1875 at the suggestion of Charlie Easther. At this time Solly's Hut was built.

* The railway between Peterborough and Quorn was connected to the town in 1881.

* The town was connected to mains electricity in 1923.

* In 1962 grain silos were built to service the local wheat growers.

There is a local website but it only has minimal information at the moment. Check out http://www.orroroo.com.au. 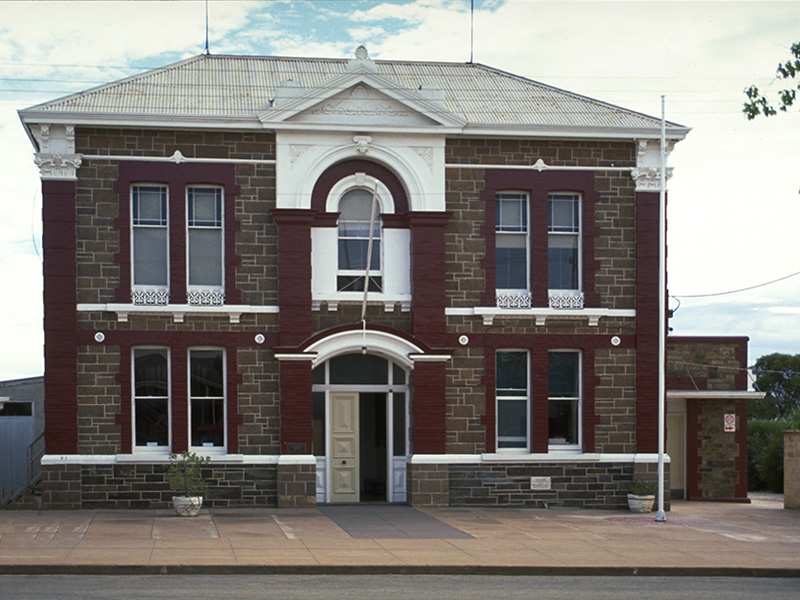 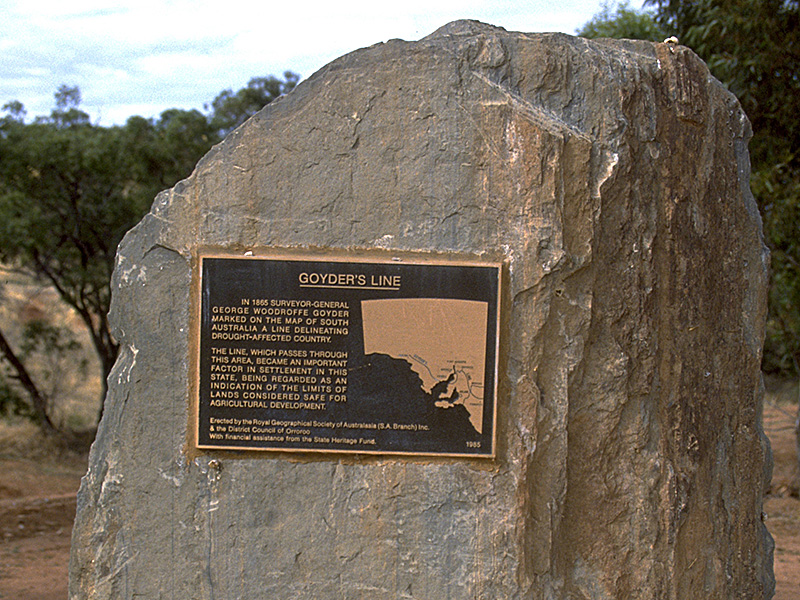