Town as famous for its Elvis Festival as for the Parkes radio telescope.

Every country town dreams of coming up with a tourist magnet - a special museum, an event, a "big" thing - which will lure visitors and enrich the local economy. One of the most unique success stories has to be Parkes where, over twenty years ago, the townsfolk thought that an Elvis Presley festival might bring in a few, much needed, tourist dollars. Today the five day event attracts over 18,000 people to the town and includes such unforgettable events as a Miss Priscilla Competition, an Elvis Street parade, an Elvis Gospel Service and, the centrepiece, an Elvis look alike competition. Of course, Parkes is much more than five days in January. It is equally famous for the Parkes Radio Telescope and it is a thriving service centre with a strong commercial and industrial base. Major employers in the district include the North Broken Hill Peko copper and gold mine and a major wheat-storage centre.

Parkes is located on the Newell Highway due west of Sydney between Forbes and Dubbo. It is 357 km from Sydney and 339 m above sea-level.

The settlement that grew up around the local goldmines was known simply as Bushmans (after a man named Mr Bush who owned one of the mines) but in 1873 Henry Parkes, the premier of the colony of New South Wales, visited the goldfields and shortly afterwards the town took his name. Some years later, in 1887, the main street was named after Parkes' wife, Clarinda.

Parkes Elvis Festival
Elvis Presley fans really deserve to be called 'fanatics'. They devour everything 'The King' did and worship everything he recorded - even some of his truly terrible movies. In 1981 two Parkes fans, Bob and Anne Steel, opened a restaurant and reception centre on the corner of Bushman and Albert Streets which, to honour 'The King', was named Graceland. In 1992 an Elvis themed party was held at Graceland for the editor of the local paper. Someone came up with the idea of turning the party into an annual event and so, in 1993, 200 people came to a festival which comprised Elvis movies, a Tribute Concert where Elvis songs were performed, Elvis Lookalike and Soundalike competitions, and a street parade. It has just kept on growing from those humble origins. The local council became involved in 2003-2004 and NSW TrainLink now puts on a special 'Elvis Express' which allows visitor/fans/celebrants to get into the mood, and sing Elvis songs, all the way from Sydney to Parkes. For more information check out http://parkeselvisfestival.com.au.

Bushman's Hill
Bushman's Hill, named after Mr Bush, was the site of the gold mine which led to the formation of the town. There is a pleasant walk to the top of the hill past the remains of an old chimney and some concrete foundations which were created for the steam engines that ran the stamping batteries. There is signage about the history of the mine along the pathways. The top of the hill provides excellent views over the town. There is also a walk with Aboriginal signs and paintings and there are plans to establish an Aboriginal cultural garden.

Memorial Hill
Unveiled in 1953 to honour those who fought in both World Wars, the Shrine of Remembrance is a 35 metre column on Memorial Hill which is worth visiting, not only to remember the soldiers, but because there is a pleasant bushwalk around the hill which includes an arboretum.

Henry Parkes Centre
In 2010 the town's privately-owned motor museum with vintage cars dating from 1904 to 1952 was combined with the King's Castle Elvis Exhibit, the Parkes Local History Museum, the Pioneer Park Antique Machinery Museum and the Visitor Information Centre.

The Parkes brochure explains: "The King’s Castle is a world standard collection of authentic Elvis artefacts. Visitors can view clothes that Elvis actually wore in the movies and on tour, plus items that surrounded Elvis at home, and the gifts he gave to those who were close to him. The collection is owned by Greg Page, renowned for his previous role in the yellow skivvy with hit children’s group The Wiggles. An Elvis fan himself, Greg has been collecting for many years and selected Parkes, the Elvis Capital of Australia, as the perfect location to share his display with the public."

Kelly Reserve
Kelly Reserve is worth spending time in because it is a quiet and pleasant park which contains the old 3075 'S' class steam locomotive and the Bushmans Dam which was originally dug to supply water to the miners working the Bushmans Hill Mine. Farmers used the dam to water their stock during droughts and it was the town's water supply until a reticulated system was introduced.

CSIRO Parkes Observatory and Radio Telescope
In 2000 the Parkes Radio Telescope became an Australian movie icon when it played a central role in the gentle comedy, The Dish. Located 20 km north of Parkes it was built by the CSIRO between 1959-1961 and was the first big-dish antenna radio telescope in the Southern Hemisphere. It is a massive 64 metres in diameter. The site was chosen because the area was known to have very few high winds and it was sufficiently isolated to avoid radio interference. Today it is still one of the world's most powerful telescopes. Its primary function is to collect, magnify and analyse radio waves and as such in its early years of operation it played a vital role in the detection of quasars, the first pulsars outside of the Milky Way galaxy and the centre of an exploding galaxy at the extreme edge of the known universe.

It achieved world wide fame when it relayed signals for NASA's Apollo 11 spaceflight which landed the first humans on the moon in 1969. The quality of the television signal from the Moon to the Radio Telescope was so superior to the ones from similar pieces of equipment in California and at Honeysuckle Creek near Canberra that most of the first two and half hours of television on the moon reached Earth via the Parkes Radio Telescope.

In 1988 it was joined with the Coonabarabran dish and six Narrabri dishes to form the 'Australia Telescope'.

There is a 3D theatre which shows a short film every half hour. As well the Visitor Discovery Centre, below the Dish, has many displays as well as souvenirs and posters. It is open daily from 8.30 am to 4.15 pm. Admission is free to the Discovery Centre. tel: (02) 6861 1777. For more information check out http://www.parkes.atnf.csiro.au.

Goobang includes the Hervey, Curumbenya and Bumberry mountain ranges and valleys. The park is home to over 300 plant species including 40 orchid species and it is also home to thirteen rare and endangered animals including the squirrel glider, brush-tailed rock wallaby, regent honeyeater, glossy black cockatoo and superb parrot. It is an ideal park for bushwalking, picnicking, camping, photography and nature studies. The park brochure can be downloaded at http://www.nationalparks.nsw.gov.au/~/media/visitor/files/PDF/Brochures/goobang-pdf.aspx. It provides a good map and descriptions of two walking tracks in the park. The 1 km Caloma Trig Walking Track (easy, thirty minutes each way) and the Burrabadine Peak Walking Track (4 km, 2 hours).

North Broken Hill Peko Mines
North Parkes Mines is located 27 km north-west of Parkes and is expected to operate for 21 years during which time it is estimated it will yield minerals worth $5 billion.

* In 1817 a party led by John Oxley became the first Europeans to pass through the district.

* In 1835 Major Thomas Mitchell led an expedition through the area, camped just north of the present townsite, and wrote that the local Wiradjuri were intelligent, resourceful, sincere and possessed of an unaffected nature.

* It is likely that illegal squatters were in the district when Mitchell passed through however the first official license for land was not issued until 1839.

* Reef gold was located a little to the north of the present townsite by James Pugh in 1862. Pugh was rewarded £1000 for the first find in the area. A tent city of 10,000 grew up as miners flocked to the area. The district was known as the 'Currajong' goldfield because of the large number of currajong trees in the vicinity. Reef mining continued until 1867.

* Another gold rush occurred in 1871 when more gold deposits were discovered. One of the most important was Bushmans Hill Gold Mine, named after a Mr Bush who was one of the owners. The settlement which grew up around Bushmans Hill was known simply as Bushmans.

* The township grew rapidly with a hotel (on the site now occupied by the Cambridge Hotel) opening. It was followed by a Court of Petty Sessions, a second hotel, a bank, a Methodist Church and a public school.

* Henry Parkes, premier of the colony of New South Wales, visited in 1873. Subsequently the settlement of Bushmans was renamed Parkes in his honour.

* Parkes was declared a municipality in 1883.

* In 1921 the first wheat silos were built at the railhead.

* The Mungincobie wheat terminal, covering 2 ha and holding 4 million bushels, was erected in 1952.

* Between 1959-1961 the CSIRO built the first big-dish antenna radio telescope in the Southern Hemisphere. It has become one of the area's most enduring tourist attractions.

Information on the Parkes goldfields is available at http://users.tpg.com.au/dtdan/forbes.htm; the town's website http://www.parkes.nsw.gov.au is useful and comprehensive with a number of downloadable brochures including a very detailed brochure on the town. 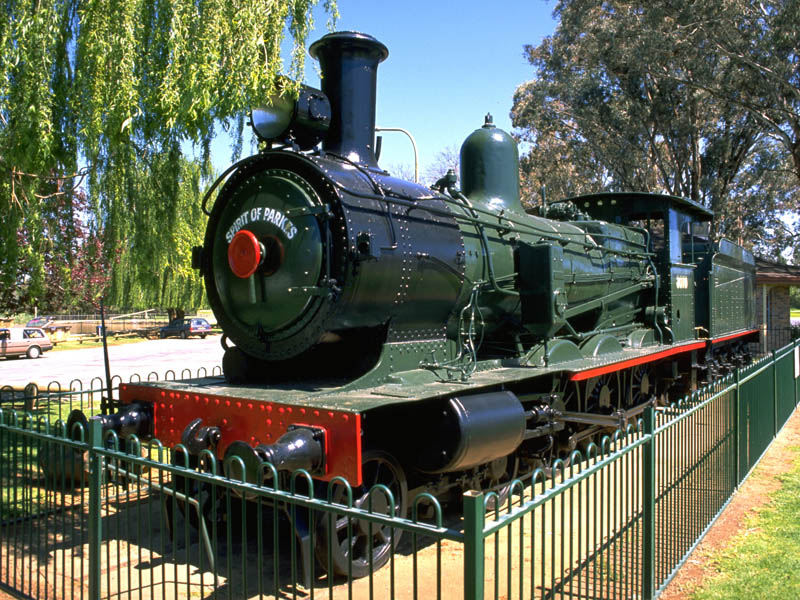 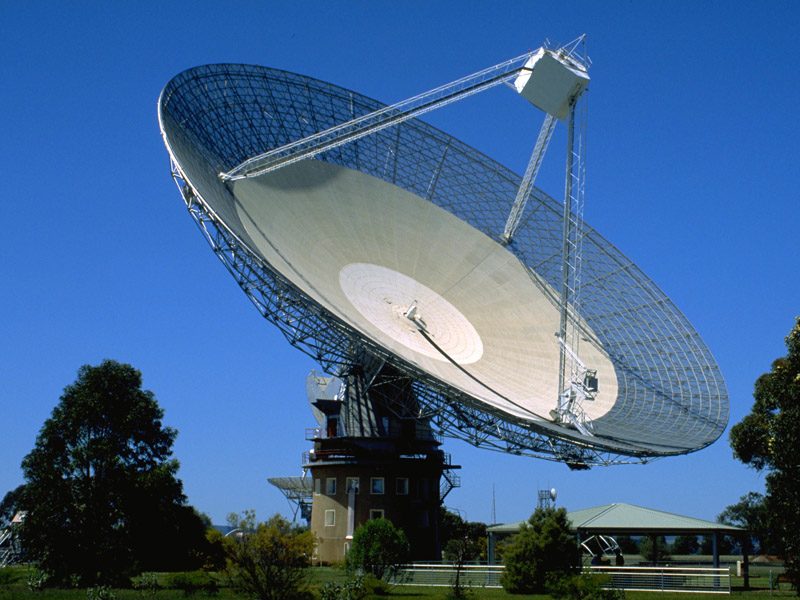 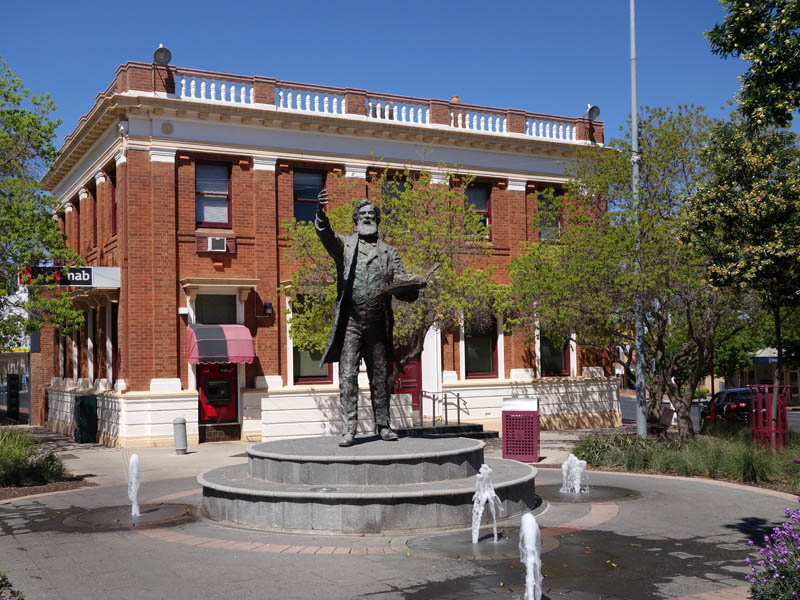 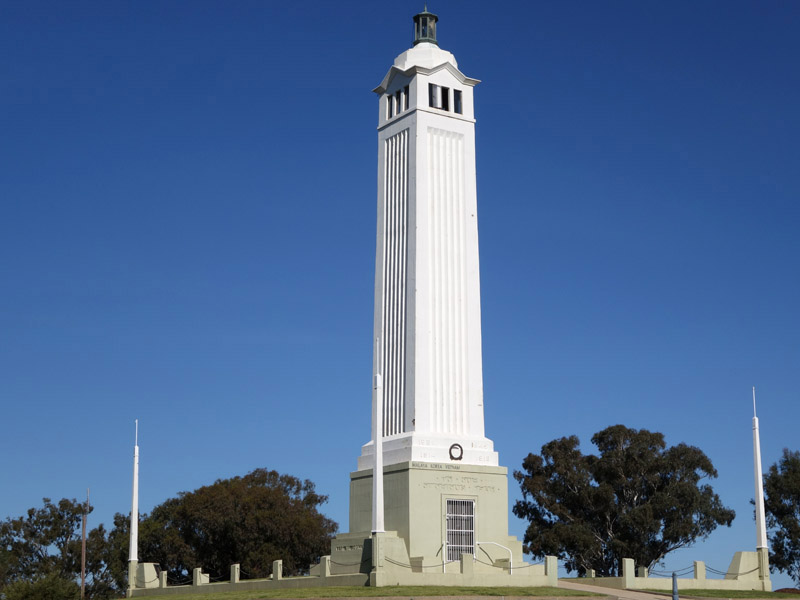 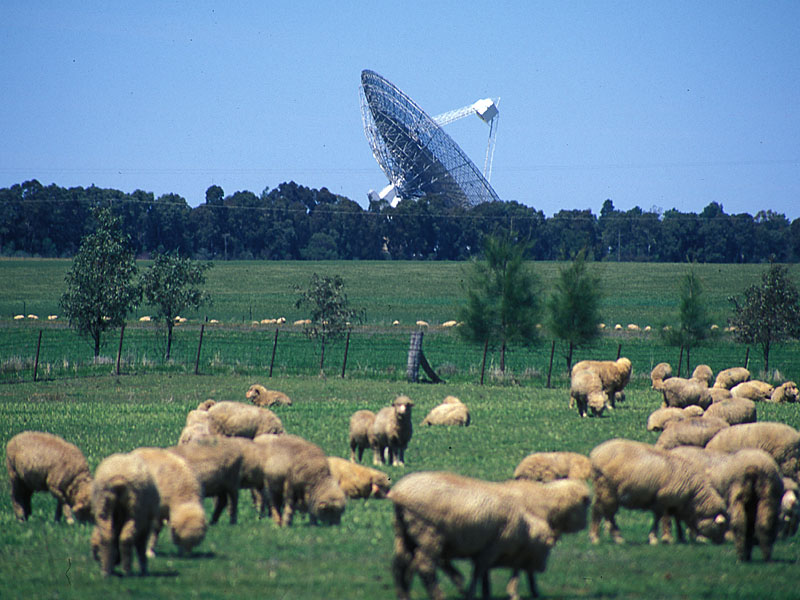