Historically interesting town on the road between Hobart and Launceston.

The tiny village of Pontville became an important stopping point on the road from Hobart to Launceston in the 1830s. Around this time it became one of the major suppliers of stone for the whole southern region of Tasmania. Today it is a sleepy village with a number of interesting historic buildings.

Pontville is located 27 km north of Hobart via the Midlands Highway.

No one is entirely certain how Pontville got its name. It literally translates from the French as 'bridge town' and that it could describe the bridge over the Jordan River. A simple and plausible explanation. Some sources credit Private Hugh Germain with the name. Germain carried the Bible and a copy of Arabian Nights with him as he travelled through the district and he gave local sites exotic names like Bagdad, Jerusalem and certainly he named the Jordan River.

An Historic Walk around Pontville
The most sensible way to explore Pontville is to go to the small park which lies between the Midland Highway and Glebe Street (it lies between the Crown Inn and St Mark's Anglican Church. In the park is a map of the town with a total of 22 places of historic interest marked and described. A pleasant 30 minute walk will pass by most of them but the important buildings are:

3. Lythgo's Row
Located at 253 Midland Highway - Over the years it has been known as 'The Row' and as 'The Barracks'. This charming and neat row of sandstone houses, located near the bridge over the Jordan River, was built between 1845 and 1855, by William Lythgo, a convict who arrived in 1836. He had been transported for fourteen years for stealing. In 1845 he purchased land from Gamaliel Butler which had been used as a sandstone quarry. He built a house there and used part of it as a store. In 1852 he purchased additional land and extended his building erecting 3 cottages at the northern end and then filling in the middle part to create a new store section. Today the building is a combination of five cottages - three with roof dormers and two larger cottages with three bays. As a row of dwellings it is an important feature of Pontville. It is now known as Lythgo's Row, a four star Colonial Heritage Accommodation. It is currently for sale.

4. The Academy
Located at 1 Glebe Street, and now a private home, this handsome two storey house was built c.1852 by William Lythgo and a Mr Lambert was using it as an Academy in 1855.

9. St Marks Anglican Church
St Marks Church of England, on the Midland Highway, is an ashlar stone church which was built between 1839-41 by Joseph Moir. The Foundation Stone was probably laid by Governor Sir John Frankin. It can no longer be seen. The National Estate register records the importance of the building in great detail: "A very unusual Romanesque-style church designed by noted architect James Blackburn and built of finely tooled local white ashlar stone ... It is not a large structure, comprising only four bays, and is symmetrical in composition, featuring a simple pitch-roofed nave with Celtic crosses at each gable end and square towers at each corner. The latter are pyramid-roofed in iron and their smooth walls are interrupted only by fortress-like slits. Each bay features round-headed trefoil windows and is distinguished by an unadorned pilaster."

The entrance is particularly impressive consisting of a decorated semi-circular entrance arch supported by two substantial columns with capitals, and smaller arches and columns forming an arcade on either side of the entrance. Above the entrance are two trefoil windows. It was not consecrated until 1884 as there was a legal dispute over the ownership of the land.

10. The Sheiling
The Sheiling, located behind St Marks Church of England at 2 Rifle Range Road, probably dates from about 1819 (that is the date on the gate) and was originally constructed as two conjoined cottages. The name is Gaelic for 'cottage'. The land was sold to William Kimberley in 1818 and he built the cottages on what was the main road through the village. It is likely that the house was used by the local police at one stage. It was converted into a single private residence in the early 1950s. Local legend has it that two policemen were housed at The Sheiling to keep an eye on travellers coming from and going to Hobart. This would explain why weatherproof porches with small windows were constructed at each end of the house – one facing north and the other facing south. It is a private home.

11. Brooksby
Across the road from St Mark's is 'Brooksby' which was built in 1839 for Lieutenant George Brooks Foster, the Assistant Police Magistrate in the district. In 1874, after it had been used as a boarding school, it was sold to the Butler family.

12. The Old Post Office
The Old Post Office at 268 Midland Highway which was built by Thomas Stace in 1840. There is some evidence that in the 1850s, when a timber veranda was added, it was a coaching inn. In 1861 it became the Pontville Post Office.

16. Crown Inn
Located at 256 Midland Highway, and the centre of the town, is the Crown Inn which was built c.1838 by the hotelier William Maule. Today it is the most prominent building in town.

17. Epsom
Epsom at 244 Midland Highway, which is over the road from the Roman Catholic Church to the south of the town, was built in 1831 by James Burnip of the Royal Veterans Corp. It has  been variously known as 'The Castle Inn and Brighton Hotel', 'Tasmanian Hotel' , 'The Crown Inn' and 'Epsom Hotel'.

18. Jordan River Bridge
It is not much of an experience to walk across the bridge but, historically, the construction was the most important event in the history of the town. There is a plaque which reads: "Jordan River Bridge 1945. The piers and abutments of this bridge formed part of the first bridge erected on this site in 1842 by Captain Forth, Director of Roads and Bridges."

Shene Historic Homestead
Located at 76 Shene Road, Shene is one of the most fascinating historic houses in Tasmania. Governor Lachlan Macquarie issued a land grant to Edward Paine, grandson of King George III, in 1819. On that land grant Shene was built with convict for the lawyer, Gamaliel Butler, and designed by his son, Francis Butler

The owners now provide two unique escorted tours of the Shene homestead which is a superb Georgian farmhouse, the nearby servant’s quarters, and the iconic Shene stables and barn. There is the Butler's Bounty Tour and the Walk in History Tour. For more information check out http://shene.com.au/tours. The tours emphasise the skill involved in the construction of these superb buildings and at the conclusion of each tour visitors are invited to join the owners in the homestead for afternoon tea. Tours are available Friday to Monday from 2.00 pm, and a limit 8-10 visitors per tour with 24 hours notice of booking. The tour runs for approximately 90 minutes and is by booking only. For more information check out http://shene.com.au.

* Prior to European settlement the area around Brighton was occupied by members of the Lairmairrener Aboriginal language group.

* The district was first explored by Royal Marine patrols soon after Governor David Collins established a colony at Sullivans Cove on 21st February, 1804.

*  By 1806 there was such a shortage of food in Hobart Town that expeditions of soldiers were being sent north across the Tamar River to kill kangaroos and emus. It is claimed that during one of these expeditions Private Hugh Germain started giving various local sites exotic names. Germain reputedly travelled with a copy of The Bible and the Arabian Nights and gave places names like Jerusalem, Jericho, Jordan, and Lake Tiberius. In fact the headwaters of the Jordan River rise in Lake Tiberius before flowing through Jericho.

* In 1818 William Kimberley took up land in the district.

* In 1830 the first bridge across the Jordan River was completed.

* It is now accepted that Pontville came into existence in 1837-1838 when Kimberley divided his holding up into 154 residential allotments and named the new settlement Pontville.

* In 1842 Captain Forth, the Director of Roads and Bridges, supervised the construction of a bridge across the Jordan River.

* By the 1840s Pontville had taken over from Brighton and was an important traveller's stopping point on the road between Port Dalrymple and Hobart.

* By the mid 1840s the town was thriving with a population of over 2000 people. By the 1860s there were six flour mills operating in the area.

* In 1863 the Brighton District was gazetted and the headquarters were at Pontville.

* In 1945 the current bridge across the Jordan River was completed.

There is no Visitor Information in Pontville. Check out the map in the small park which lies between the Midland Highway and Glebe Street. It lists all the buildings of interest in the town. 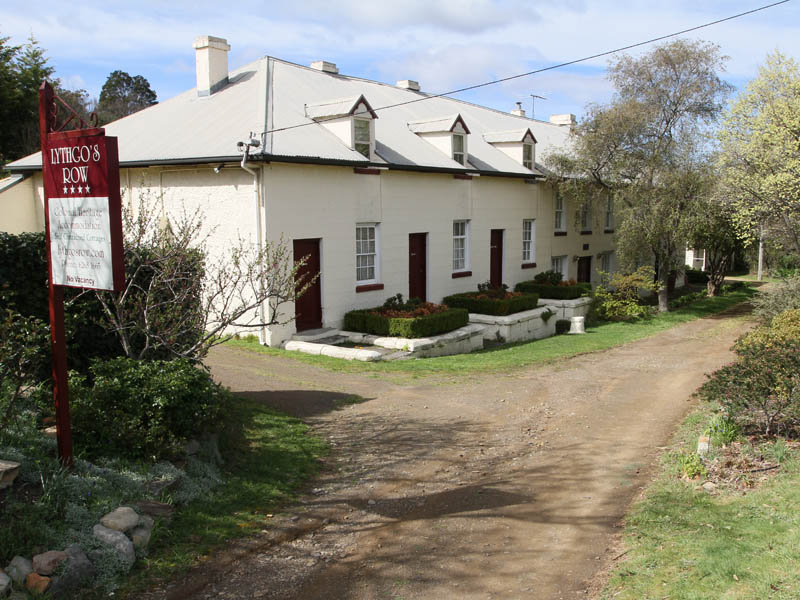 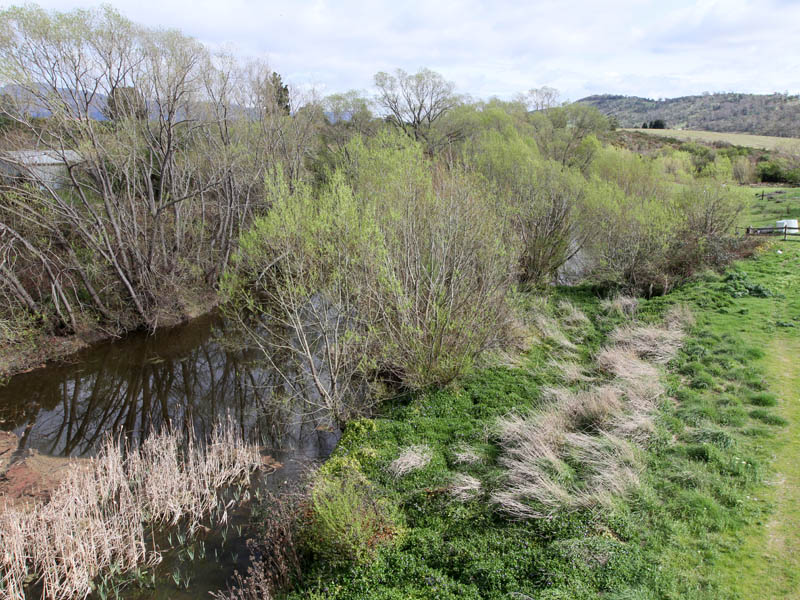 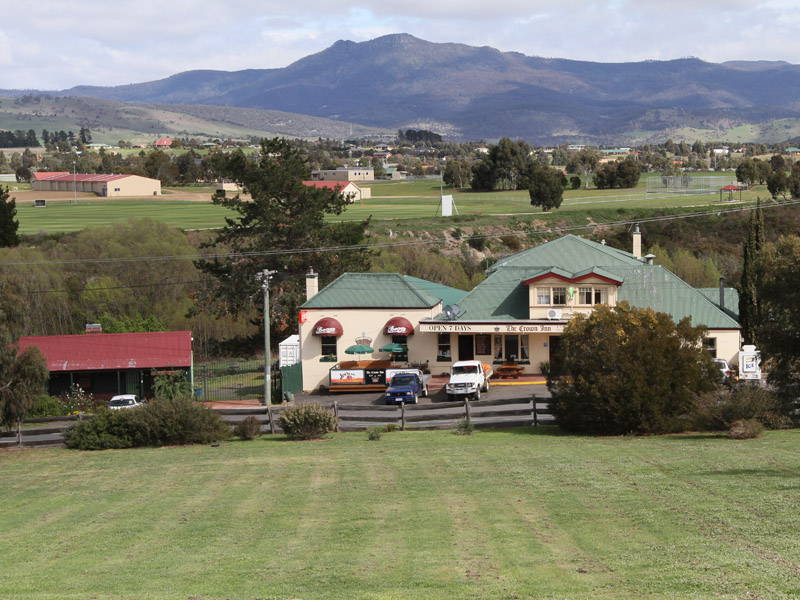 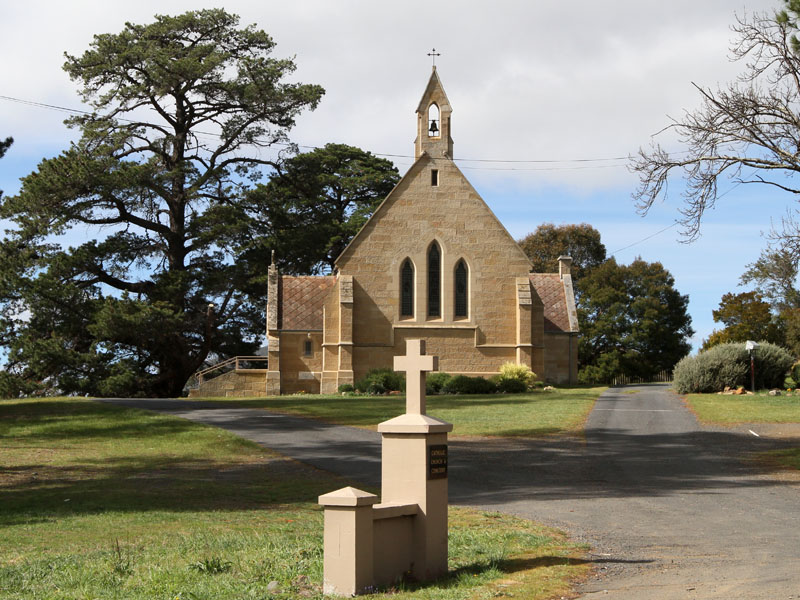 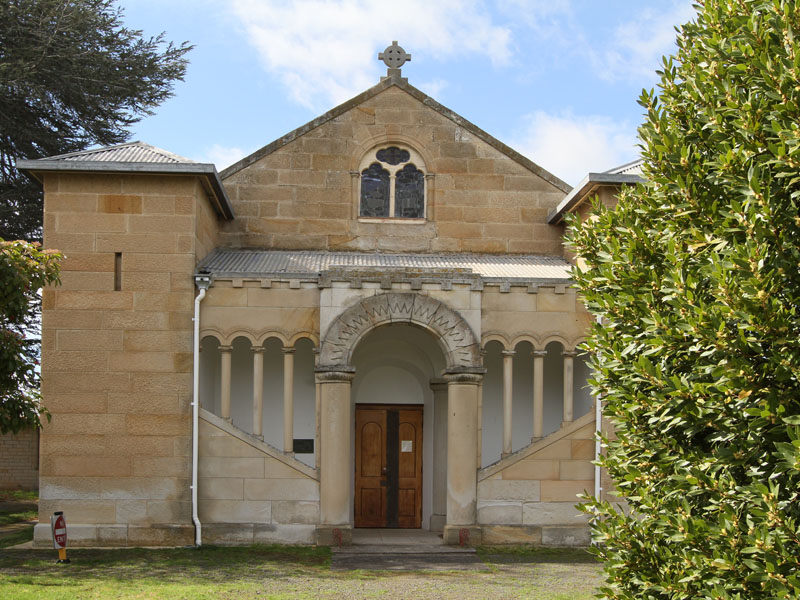 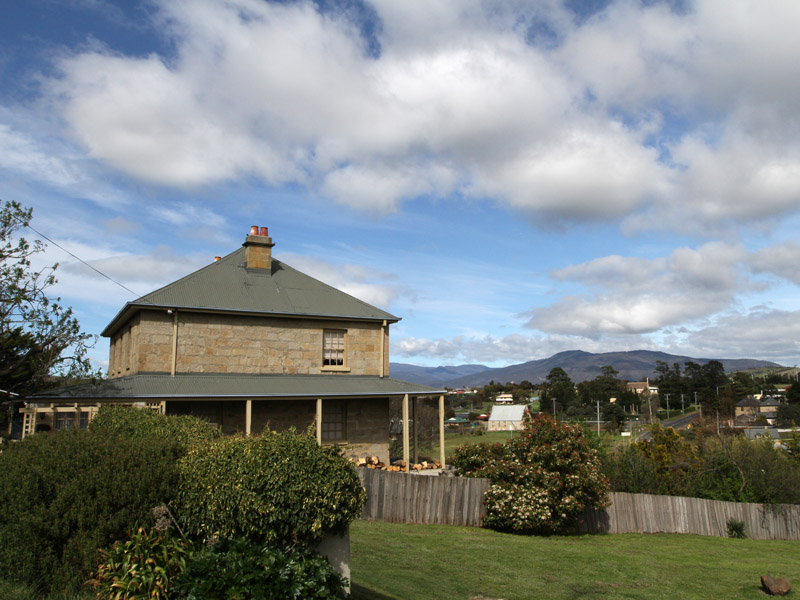 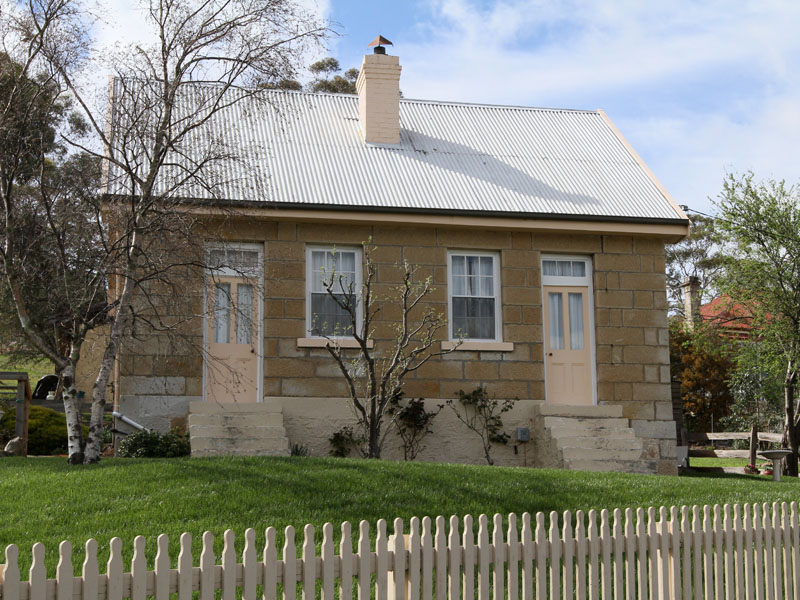 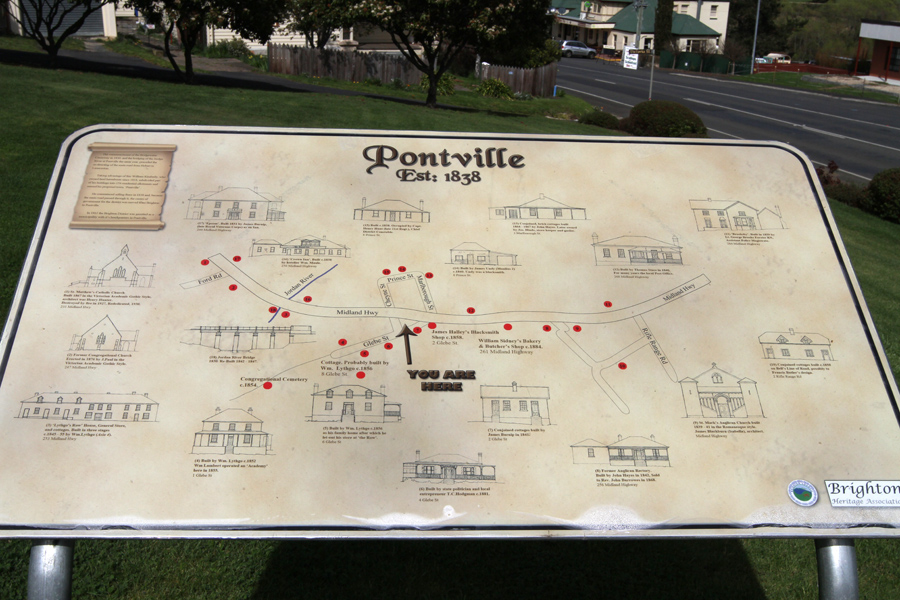