Powelltown is a tiny town with a sawmill, a church and a few houses which is important because, for decades, it was at the heart of one of Victoria's richest and most prosperous timber gathering areas. The huge Mountain Ash (the world's tallest hardwood) saw tramways, sawmills and industry booming in the district until it was all nearly obliterated by the horrific fires of Black Friday, 1939. Today there are excellent bushwalking opportunities on a number of the old tramways. The "Walk into History" 33 km walk to Warburton is difficult but unforgettable.

Powelltown is located 85 km east of Melbourne and 19 km south-east of Yarra Junction.

Powelltown was named after the Victorian Powell Wood Processing Company which harvested mountain ash in the district.

Powelltown Heritage Trail
Powelltown Union Church
Located in the main street this simple church was built in 1927 "after the minister of the time, Reverend Harwood realised the growing population of Powelltown were in need of a closer place of worship. Before this time members of the public would often travel by small locomotive to Yarra Junction and surrounding areas to attend church or attend the service held in the Powelltown Public Hall.
"The timber used to build the church was provided by The Powelltown Mill and was constructed by volunteer labour under the supervision of local carpenters, Fred Gribble and Joe Drew. The church pews were built through working bees while much of the furniture was donated by locals ... The Powelltown Union Church stands as one of the last remaining Union Churches in Victoria.

Walking Tracks
The old tram tracks, which were built to convey timber from the forests to the sawmills, have now been converted into fascinating and hugely enjoyable forest walks which traverse the surrounding forests of mountain ash (the second-largest tree species in the world) and cool temperate rainforest.
Typically the tramways followed rivers because of the less complicated gradient. There are trestle bridges at river crossings and tunnels were blasted through hills when the gradient was too steep.
The sleepers and rails were made of local timber although steel rails were used on the busier sections and eventually on all lines when locomotives were introduced. The trees were cut with axes and cross-cut saws. The logs were relayed to the landings beside the tramway by huge steam winches. Placed on carriages they were taken to bush sawmills then along the tramway to the main rail lines at Powelltown or Warburton.
The initial mode of haulage was horses. Steam-powered locomotives replaced horses in 1913 and motor locomotives were being used by the 1930s. A major forest fire in 1939 destroyed much of the track system and a number of sawmills. However by the 1940s most of the timber was being extracted from the area along roads.

Reid's Tramline Walk
Reid's Tramline Walk is a short, 6 km walk which starts at the picnic area opposite the office of the Department of Environment and Primary Industry on the main road (the Yarra Junction-Noojee Road) at the western edge of town. It heads north-east, following tramlines through forests of mountain ash, fording the Little Yarra River and including Reids sawmill (you can see the original workers' cottages above the present mill). It then heads south along Blackwood Creek to the main road at the eastern edge of town and back to the picnic area. The Trail Hiking website (https://www.trailhiking.com.au/reids-tramline) has a good description of the walk and an excellent map.

The Yarra State Forest Notes list a total of seven walks in the area (see http://www.depi.vic.gov.au/__data/assets/pdf_file/0003/225705/FS0033_-_Yarra_State_forest.pdf). It includes Reid's Tramline Walk, Seven Acre Rock Walk, Walk into History as well as Spion Kopje, La La Falls and Richards Tramline. There are enough walks around Powelltown to keep the most enthusiastic bushwalker busy for a week.

Seven Acre Rock Walk
The Seven Acre Rock Walk lies beyond the Reid's Tramline Walk. On the left hand side of the road is Learmonth Creek Road. Follow Learmonth Creek Road to the start of the track (2 km return) which is opposite the picnic area. It leads to the rock outcrop which is an excellent viewing platform affording views of Westernport Bay, Bunyip Valley and, on a clear day, Port Phillip Bay. There's a good description and photographs at http://bushwalkjournal.blogspot.com.au/2009/01/seven-acre-rock-yarra-state-forest.html.

The Walk Into History and Optional Extras
This 33 km, two to three day walk is usually taken from Warburton but it can be successfully completed from Powelltown. It starts opposite the office of the Department of Environment and Primary Industries work centre and the Powelltown Picnic Area.
It is essential to access and download Forest Notes: Walk into History at http://www.depi.vic.gov.au/__data/assets/pdf_file/0005/276233/FS0124-Walk-Into-History.pdf. It is an extensive description of the entire walk (it divides the walk up into bite-sized chunks) and it comes with a useful map which highlights the main attractions along the walk.
What is it? It is perfectly described as "historic timber tramways that wind their way through spectacular and diverse forest scenery, including forests of the world’s tallest hardwoods (Mountain Ash) and sections of cool temperate rainforest in moist sheltered gullies. The walk is unique in Victoria, retracing the route of the original tramways and visiting the sites of former settlements and bush mills, now largely reclaimed by the forests."

Powelltown Picnic Area to High Lead Car Park
Distance: 10.5 km, Time: 3 hours, Difficulty: rough track, many steps, very steep
The first section is a leisurely 6.3 km walk along the Little Yarra River from Powelltown. The second section to High Lead car park is 4.2 km along the Latrobe River to The Bump, a ridge which separates the Latrobe River Valley from the Little Yarra River Valley. As the gradient was so steep a winch was originally used to haul the log bogies up and down. In 1925 a 313 m a railway tunnel was blasted through The Bump. Evidence of the tunnel is still visible. It was sealed for safety in World War II though the entrances are still visible.

High Lead Car park to Ada No.2 Mill
Distance: 5.5 km, Time: 2.5 hours, Difficulty: rough track, many steps
The next section is a 5.5 km walk from the High Lead car park on the Powelltown-Noojee Road to Cross Roads and Ada No.2 Mill. The track follows Big Creek (note the myrtle beeches) north-west for 1.4 km to the start of the High Lead incline which is the most difficult part of the track, ascending 415 m in altitude over 1600 m to the another winch site on the top of Doweys Spur. It is then a short walk down to Doweys Spur Road. The mountain ash is regrowth which has sprung up since the Ash Wednesday fires of 1983 devastated the area around High Lead and The Bump.

Crossroads & Ada No 2 Mill to Starlings Gap
Distance: 8 km, Time: 3 hours, Difficulty: rough track, many steps
The next section is 8 km. The track drops straight down to the Ada River and, immediately on the other side, is the Ada No.2 sawmill where a few remnants such as the boiler remain. It was destroyed by the 1939 bushfires. A little further there is a track junction presenting three choices: (a) head north to the New Ada Mill (2.8 km return) (b) head east to the Federal Mill (4.3 km return) or on to the Ada Tree Circuit (c) follow the Walk Into History north-west up the Ada River Valley, past numerous trestle bridge ruins to the picnic area and campground at Starlings Gap, the divide between the LaTrobe and Yarra River Valleys (740 m above sea-level). Starlings Gap is a good place to rest or camp overnight (there are fireplaces, toilets and tables).

Starlings Gap to Big Pats Creek
Distance: 9 km, Time: 3.5 hours, Difficulty: rough track, many steps
The bush workers used to walk this section on Sunday evenings so as to be ready for work at Starlings Gap on Monday morning. It is known that some super fit workers used to run back the 9 km to play football. The two sawdust heaps along the route mark the sites of two sawmills - Ezards Mill and the mill at Starlings Gap. Starlings Gap is a good place to rest or camp overnight. There is also an old winch and boiler near the campsite. Shortly after crossing Burns Road the line meets Big Pats Creek and follows it down to Big Pats Recreation Area.

The Ada Tree Walk and Drive
One of the highlights of the district is the Ada Tree, an ancient Mountain Ash which is one of the largest known flowering trees in the world. It is estimated to be over 300 years old, is 76 m tall and has a circumference of 15 m. It can be accessed from Crossroads on the Walk Into History. Head eastwards along Federal Road. It can also be accessed via the Powelltown-Noojee Road. Turn onto the Ada River Road and 12 km on is car park and picnic area. Follow Island Creek to the tree and loop back to the carpark via Federal Road. It is 3.6 km return. Check out http://www.visitwarburton.com.au/activity/the-ada-tree-walk for details.

* Prior to the arrival of Europeans the area was occupied by the Woiworung Aborigines.

* By 1893 berry fruits were being grown in the valley.

* The forests of the Upper Yarra Valley were first milled in the 1890s.

* By 1907 a horse drawn tramway was operating from Gilderoy to Yarra Junction.

* In 1911 the Victorian Powell Wood Process Company was formed. Shortly after Powelltown was formed as a company town.

* By 1913 the Powelltown Tramway was running between Powelltown and Yarra Junction.

* The surrounding area was devastated by the infamous Black Friday bushfire in 1939.

* By the 1950s the company town was being sold off to private purchasers.

There is no Visitor Information in the town.

There is no dedicated Powelltown website but Forest Notes: Walk into History at http://www.depi.vic.gov.au/__data/assets/pdf_file/0005/276233/FS0124-Walk-Into-History.pdf offers an excellent and detailed guide to the main walk in the area. 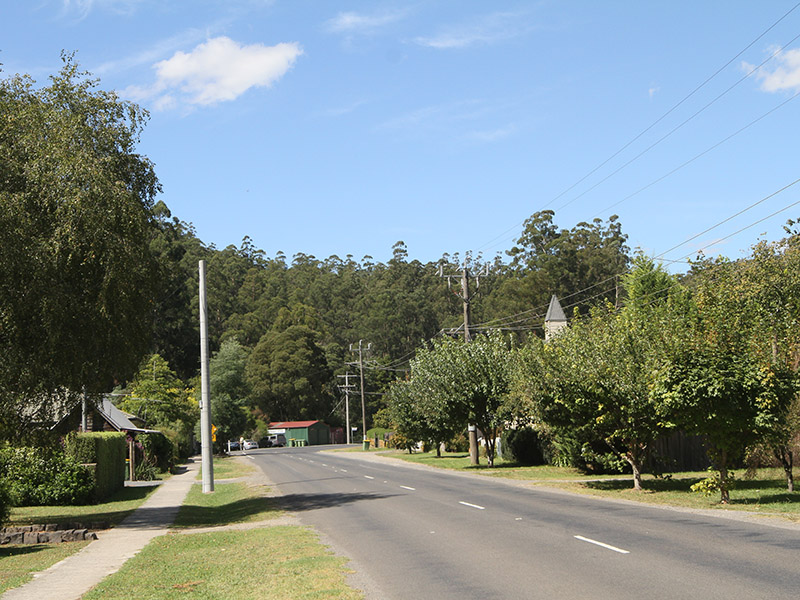 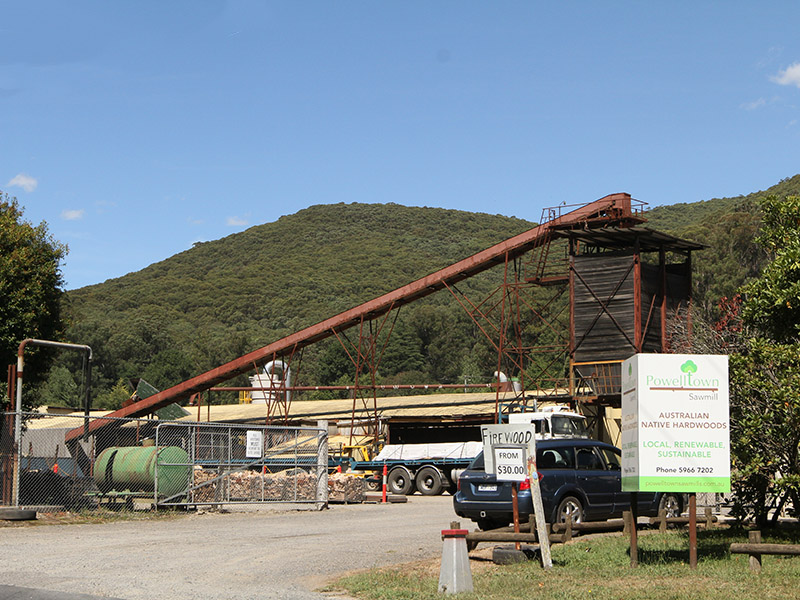 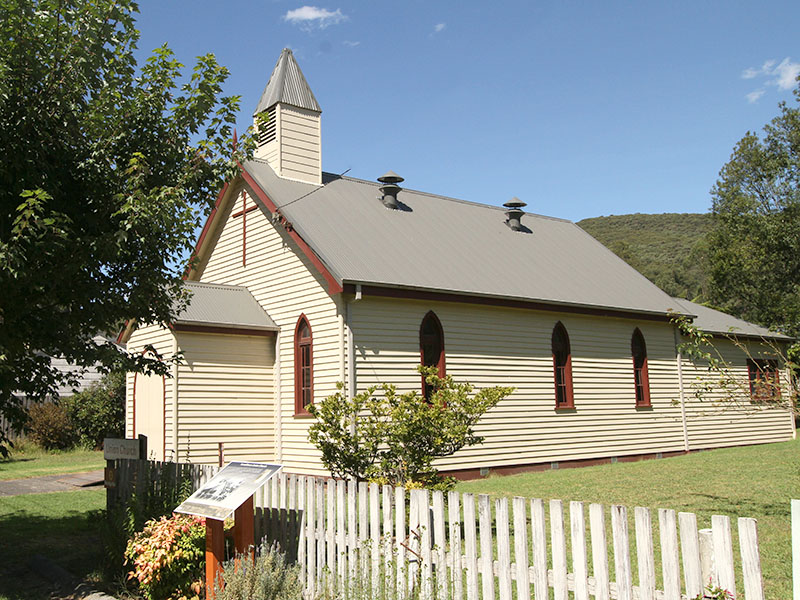 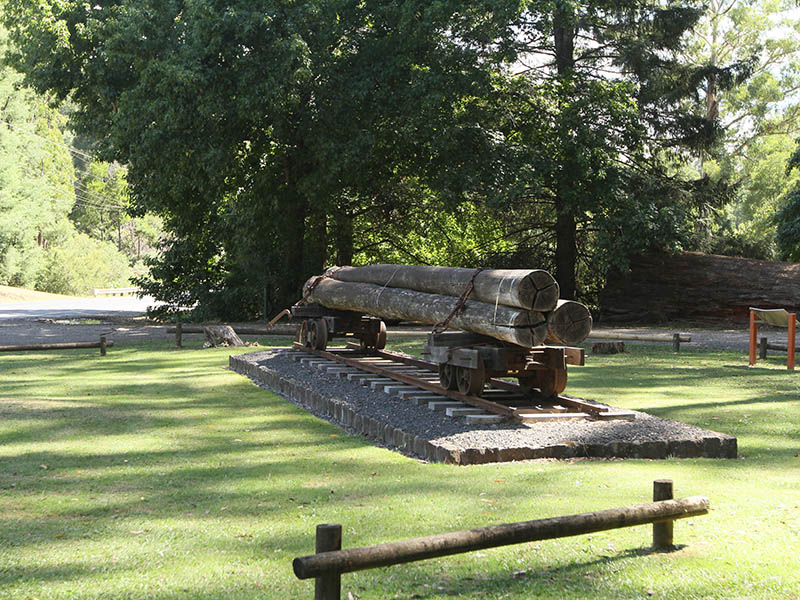 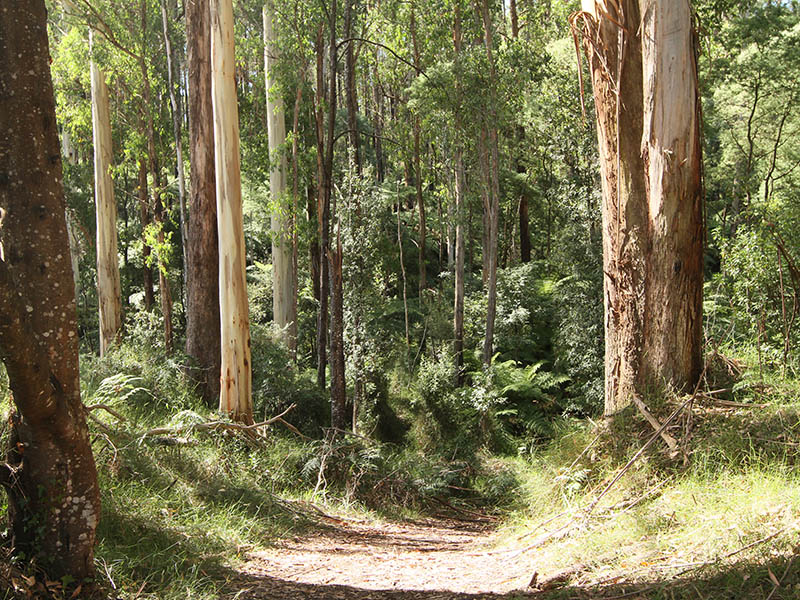 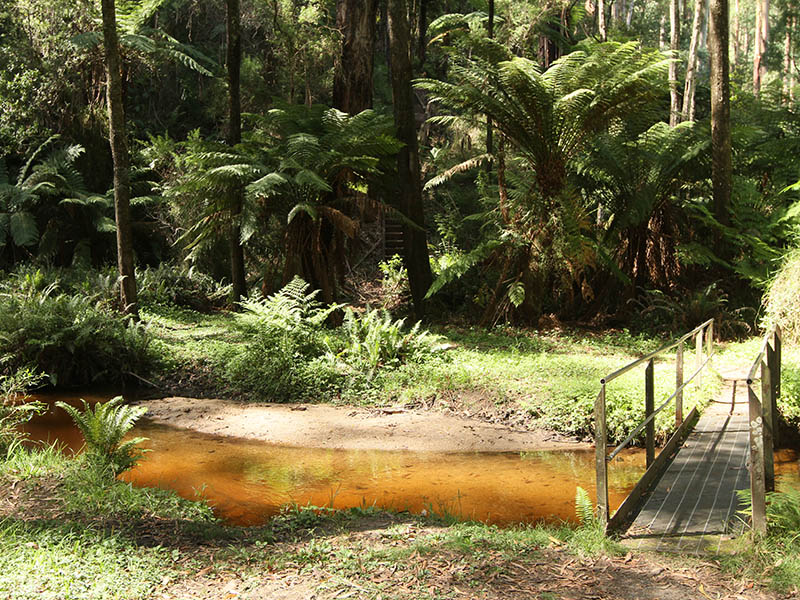