Pyramid Hill is a small town south of the Murray River. It primary interest lies in the remarkable granite outcrops which are dotted throughout the area. Apart from the outcrop which gives the town its name there is also Bald Rock in Terrick Terrick State Park and Mount Hope, named by Major Thomas Mitchell as he explored the area. The primary place of interest is Pyramid Hill a remarkable triangle of granite which rises from the flat surrounding countryside and, as its name suggests, looks exactly like an Egyptian pyramid.

Pyramid Hill is located  242 km north of Melbourne via Bendigo.

Pyramid Hill is one of those 'bleeding obvious' names because the hill itself, which was first sighted by Major Thomas Mitchell in 1836, looks like a triangle of stone. Thus Mitchell named it because of its similarity, as he wrote, to 'the monuments of Egypt'.

Pyramid Hill
Pyramid Hill (187 m above sea-level) is worth visiting because (a) it is a rare natural phenomena which really does look like an Egyptian pyramid - at least from a distance and (b) there is an easy walk up to an excellent vantage point where you can look over the very flat countryside and the nearby town of Pyramid Hill. This is wheat and sheep country which, in the spring, is particularly attractive because it can be covered in wildflowers. In fairness Major Mitchell arrived in the middle of winter and was lyrical in his appreciation of the view. In Three Expeditions into the interior of Eastern Australia he wrote: "Its apex consisted of a single block of granite, and the view was exceedingly beautiful over the surrounding plains, shining fresh and green in the light of a fine morning. The scene was so different from anything I had ever before witnessed either in New South Wales or elsewhere. A land so inviting and still without inhabitants!"

Fauna on Pyramid Hill
The signage at the bottom of the hill gives a good indication that the careful visitor could see the wedge-tail eagle, black wallaby, yellow-rumped honeyeater, eastern brown snake and zebra finch.

Mount Hope
Mt Hope was also climbed in 1836 by Thomas Mitchell. The name was given to the hill by Mitchell who, as he climbed, hoped that he would see the sea from its peak. There are picnic facilities and a Mitchell plaque at the base of the mountain and it is but a short walk to the top of the hill. At the top there are panoramic views which take in Kow Swamp and the surrounding farmland.

Terrick Terrick National Park
Terrick Terrick National Park lies 20 km south-east of Pyramid Hill. It protects over 200 species of native flora including including Victoria's finest stand of native white cypress pines. Fauna includes grey kangaroos, black wallabies and tree goannas and it is recognised the largest nesting site for brolgas in Victoria. Its birdlife also includes the Plains wanderer, Grey-crowned babbler, barking owl and spotted nightjar. The park has some impressive granite outcrops and rocky depressions which were used as water holes by the Aborigines.

Pyramid Hill is a town which was the victim of a decision by the state railways. It was first explored by Major Thomas Mitchell who, in 1836, climbed and named the hill after which the town is named. Mitchell sang the praises of the district and soon after his exploration squatters moved in and settled. A town, comprising two hotels, St Patrick's Church (1875), a school (dating from 1876), a showground (1888), a weir for regular water supply, a blacksmith and a general store was established on the south side of the hill (you can see old photographs of the town on the signage at the base of Pyramid Hill) near the original Pyramid Hill run but when the railway arrived in the area in 1885 the town was moved to its present site.

There is a useful local website - http://www.pyramidhill.net.au - with information about the history and some good photos of the area. 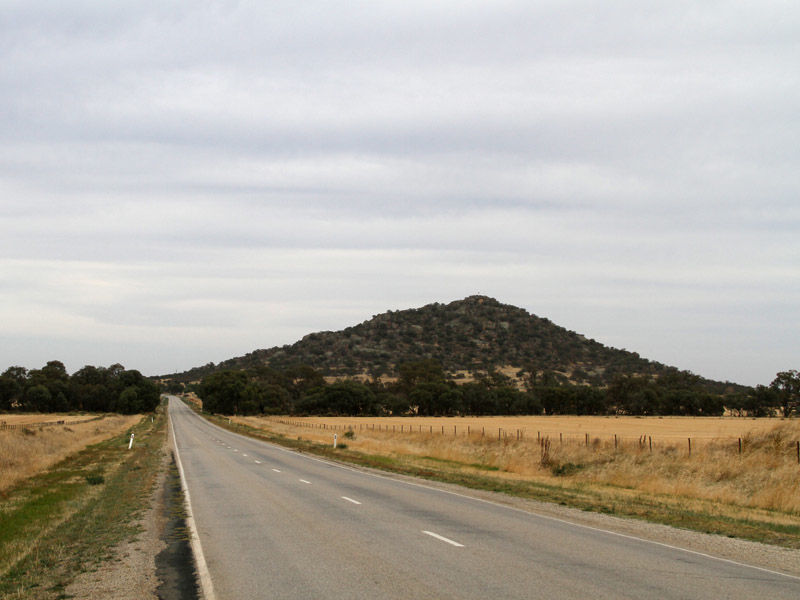 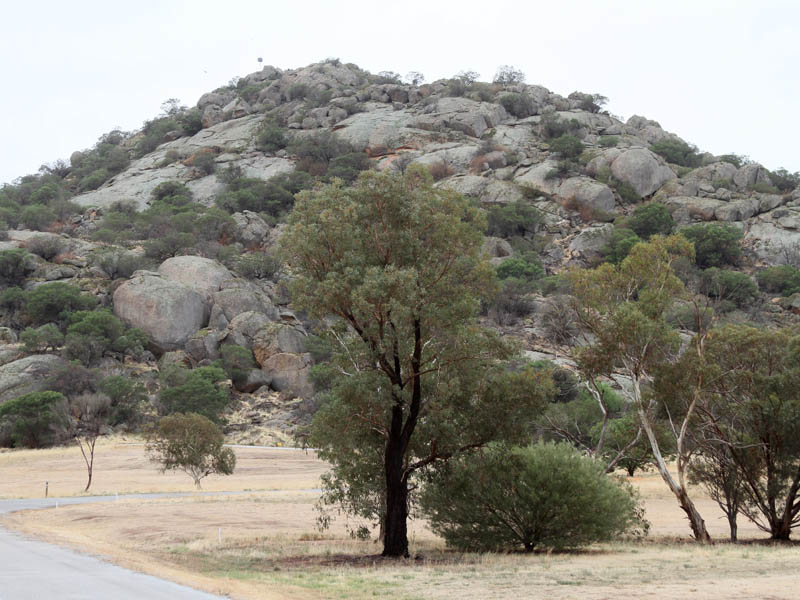 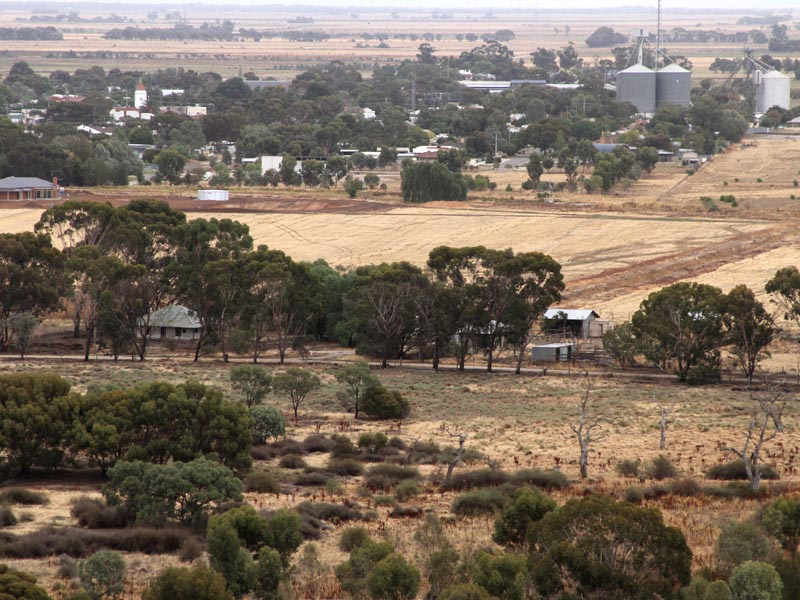