Queanbeyan is a city which seems to have a split personality. It is located on the Queanbeyan River less than 15 km from Canberra and consequently it has the identity of a commuter belt town for the Australian capital while also being a service centre for the surrounding agricultural and pastoral industries. Located at an elevation of 576 metres on the highest edge of the Monaro Plains it can be bitterly cold in winter and hot and dry in summer. The area is known for its sheep, cattle, wool, nurseries, honey, wine, hay and barley. It likes to think of itself as a city with a country atmosphere and certainly, when compared to nearby Canberra, it has a languid rural feeling with just the right level of city amenities.

Queanbeyan is located on the Queanbeyan River 289 km south-west of Sydney via Hume and Federal Highways. It is 15 km south-east of Canberra.

The first European to settle the district was ex-convict Timothy Beard who established a property on the Molonglo River called 'Quinbean' after a local Ngarigo Aboriginal word meaning "clear waters".

There is a useful Heritage Walk which can be downloaded at http://www.visitqueanbeyan.com.au/assets/pdf/heritage_walk.pdf. It is a modest walk around the town centre which will take about 90 minutes. The highlights include:
1. Visitor Information Centre
Located at 1 Farrer Place, the Visitor Information Centre is housed in the former council chambers which were built in 1925 and remained operational until 1975. On the front lawn is a sundial dating from 1860 and, to the rear, is the local showground where the entrance gates, grandstand and shearer's bar are historical and impressive. On the corner of Lowe Street and Farrer Place is a memorial to James Farrer who, on his property at nearby Tharwa, pioneered the scientific breeding of rust and disease-resistant wheats.
4. Council Chambers
Located at 253 Crawford Street is the town's Council Chambers which were built as a home for the School of Arts. Although it was constructed in 1927 the Romanesque architecture is considered unusual and it has been listed with the New South Wales Heritage Commission. It is now the council chambers building.
6. Dutton's Cottage
Located at 263 Crawford Street is Dutton's Cottage (pre-1885) which has unusual chimneys on both sides - check them out. It is a comment on the evolution of the town that this building still stands although it is less than a block from the main street.
7. Methodist Church
Located in Rutledge Street, just around the corner from Crawford Street, is the tiny and very simple former Methodist (now Uniting) Church. The earliest section dates to 1859.
8. St Benedict's Convent
Standing impressively on the corner of Isabella and Crawford Streets is the former St Benedict's Convent (1880-86) which was built by the Sisters of the Good Samaritan.
9. Suspension Bridge
At the bottom of Isabella Street is a suspension bridge across the Queanbeyan River. The first suspension bridge was built in 1901 but it was largely washed away in the floods of 1925.
10. Christ Church
Located on Rutledge Street is Christ Church. The original Anglican church and rectory were built in 1843. The present structure dates from 1859-60 although the original stone schoolhouse (1843) remains behind the church. The stables also date from 1843 and the brick schoolhouse from 1865. The main part of the rectory dates from the early 1870s.
13. Byrne's Steam Flour Mill
Located at 58 Collett Street, Byrne's Steam Flour Mill was built in 1883 but only lasted as a flour mill for a very short time. In recent years it has a variety of uses including being an excellent restaurant.
14. The Mill House
The two-storey stone building at 57 Collett Street was built in 1883 as a residence for operators of the adjoining Byrnes Mill.
15. Queen Elizabeth Park
Queen Elizabeth Park was originally the town's market reserve when Queanbeyan was gazetted in 1838. The willows, which seem to have been mostly removed, on the riverbank allegedly began as cuttings from Napoleon's grave on St Helena. The town's first police magistrate collapsed and died in the park while playing cricket in 1856. It has been attractively modernised and is an ideal place for a picnic - it has an excellent children's play area.
17. John Gale Statue
Located opposite the Visitor Information Centre on the corner of Lowe Street and Farrer Place is a statue of John Gale (the 'Father of Canberra') who was active in promoting Canberra as a suitable site for the national capital. He also founded Queanbeyan's first newspaper, the Golden Age in 1860.
18. Queanbeyan Museum
Located at 10 Farrer Place, the Queanbeyan Museum is housed in the old police sergeant's residence (1876). It became a museum in 1981. There is a medical exhibit, a machinery shed, a period bedroom, a clothing collection, a kitchenware exhibit and blacksmith's display. The website (https://queanbeyanmuseum.org.au) notes: "The Museum has a strong focus on the history of Queanbeyan and surrounding district, with a broad collection of over 3,500 items that includes furniture, textiles, technological objects, costumes, pictures, maps, objects, and photographs" with ten galleries including:
* The Ngambri people before Europeans arrived
* How did Queanbeyan develop?
* Bushrangers and Larrikins
* Stories From a Country Town – Queanbeyan during WW1 1914-1918
* The Wash House – cleaning our clothes and ourselves
It is open from 1.00 pm to 4.00 pm Saturday and Sunday, tel: (02) 6169 6213 during opening hours.
19. Queanbeyan Printing Museum
Located at 20 Farrer Place and open from 2.00 pm - 4.00 pm on Sundays, the museum "preserves Queanbeyan's hot metal printing skills and machinery. John Gale, who founded Queanbeyan's first newspaper, the Golden Age, started using a Columbia hand press in September 1860. Hot metal printing ended with the retirement of Linotype machines in 1983. The museum opened in 2004 and still has working presses. Check out http://www.queanbeyanprintingmuseum.com for more details.

Queanbeyan Park
Behind the museum is Queanbeyan Park with its oval and tennis courts, which was dedicated in 1893 although exotic trees had been planted as early as 1870. It retains a few surviving examples of the old cast-iron lamp stands which were once found throughout town.

Molonglo Gorge
Molongo Gorge is located on the Molonglo River, ten minutes from Queanbeyan via Yass Road and Sutton Road. The gorge, which is 15 million years old, was formed when Lake George and the Queanbeyan fault lifted and cut across the Molonglo River. The river cut through the rising land. A walking track from the Molonglo Gorge Car Park is 6.5 km (return) and follows the gorge to the Blue Tiles Picnic Area. There are two major plant communities in the gorge: a Bull Oak forest and a Red Stringybark/Black Cypress pine forest. There is an understorey of Hop Bush, Pomaderris, Wattle, Poa and Pale-fruited Ballart.

Googong Dam
Located 13 km south of Queanbeyan via Old Cooma Road, Googong Dam is a popular recreation area which offers bird watching, excellent fishing, bushwalking, picnicking, canoeing, kayaking and sailing. The dam wall is 65 m high. It can be viewed from the car park at the northern side of the Googong Foreshores. The foreshores of the lake are home to significant wildlife and native plants including the endangered Pink-tailed worm lizard and Rosenberg's monitor. A total of 165 birds have been recorded in the area including the hooded robin, diamond firetail, brown treecreeper and speckled warbler. "Googong protects plants of national or state significance including the Silky Swainson-pea and Australian Anchor Plant. These plants occur in open grasslands on the reserve’s western side. Unusual Pomaderris and Dillwynia species grow in the woodlands along the Black Wallaby Loop Track and in heathy areas between Tin Hut Dam and Tortoise Inlet. White Box-Yellow Box (Box-Gum) Woodland, an endangered ecological community, also occurs here." Check out the excellent, downloadable map and guide to the dam which is available at https://www.environment.act.gov.au/__data/assets/pdf_file/0006/392523/Googong-Map-and-Guide.pdf. Googong Foreshores is open from 8.00 am - 5.00 pm. The brochure lists a total of eight walks around the Googong Dam from the Downstream Picnic Area, the Foreshores Car Park and the London Bridge Car Park.
1. London Bridge Walk - 3.4 km return from London Bridge Car Park - around to London Bridge Arch and London Bridge Homestead.
2. Black Wallaby Loop Track - 2.6 km return from Downstream Picnic Area to the dam wall beside the Queanbeyan River.
3. Cascades Walk - 200 m from the car park to the Cascades Lookout and Dam Wall Lookout.
4. Shoreline Walk - 4 km return from Foreshores Car Park along the Googong shoreline.
5. Queanbeyan River Walk - 18 km return from London Bridge Car Park following the Queanbeyan River.
6. Western Foreshores Walk - 19.7 km return from the Foreshores Car Park through grassland and woodland with scenic views.
7. Bradley's Creek Walk - 14.2 km return from Downstream Picnic Area which skirts the northern shore of the dam.
8. Queanbeyan River Loop Ride - 19.7 km return from London Bridge Car Park which involves steep grades and two crossings of the Queanbeyan River.

London Bridge Homestead
Further along Old Cooma Road, turn left into the Burra Road and left again onto London Bridge Road which leads to a car park beside London Bridge Woolshed and shearers' quarters where there are picnic-barbecue facilities. There is a 3.4 km return walk which leads from the car park to London Bridge Arch - a natural rock arch carved in limestone by the passage of Burra Creek and continues along Burra Creek to London Bridge homestead (1860) which comprises a stone cottage, slab hut, wattle and daub dwelling, a weatherboard building and a fibro annexe. The primary appeal of the complex is that "it is a remarkable example of five different building styles, all on the one site ...The various building styles reflect the changes in the availability and cost of labour and materials. The early buildings were constructed of local stone and timber, whereas imported corrugated iron and weatherboards were used in later buildings."  There is a detailed, downloadable brochure at https://www.environment.act.gov.au/__data/assets/pdf_file/0005/392522/londonbridgehomesteadhandout.pdf.

* The first Europeans in the district were the exploratory party of Charles Throsby. While searching for the Murrumbidgee River in 1820, they found and followed the Queanbeyan River into a valley at the eastern end of the Limestone Plains.

* Squatters moved into the district from 1824.

* The first person to graze on land near to the present townsite was ex-convict Timothy Beard who established a property on the Molonglo River called 'Quinbean'.

* Beard was an innkeeper from Campbelltown and preferred to remain there while three convict stockmen ran his western enterprise. He was ordered to quit the property in 1828.

* A township reserve was established at Queanbeyan in 1828.

* A police magistrate was appointed in 1837.

* Queanbeyan was officially proclaimed a township in 1838, at which time there were some 50 residents. The town's first inn opened that year.

* A residence for the police magistrate, known as 'Dodsworth', was built on the town's southern boundary in 1839. Adjoining were huts for the court, lock-up and constables' quarters.

* In 1841 there were three brick and seven timber buildings at Queanbeyan.

* Bushrangers including Ben Hall, Frank Gardiner and John Tennant carried out robberies in the district from the 1840s to the 1860s.

* Gold was found in the area in 1851. Lead and silver were also mined.

* The first bridge across the Queanbeyan River was opened in 1858.

* The first banking agency was operating in the town in 1859.

* The first newspaper was published in 1860.

* Queanbeyan was declared a municipality in 1885. At that time there were eight hotels, four churches, two flour mills, a tannery and a lemonade factory, as well as dwellings and shops.

* The population rose during the 1910s and 1920s due to the construction of Canberra.

There is a useful local website. Check out http://www.visitqueanbeyan.com.au particularly for accommodation and dining. 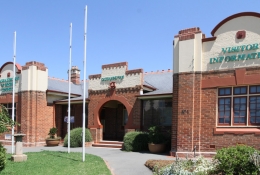 The Queanbeyan Visitor Information Centre (1925) - once the council chambers 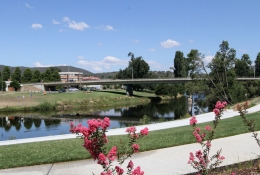 The main Monaro Street bridge across the Queanbeyan River 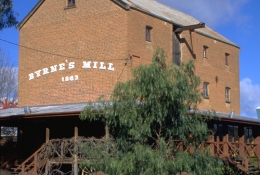 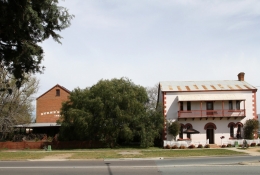 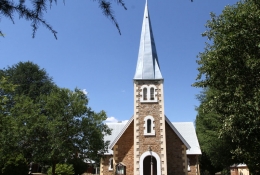 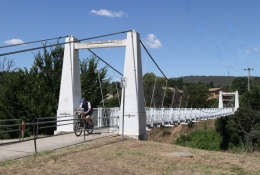 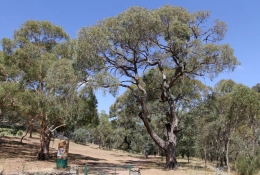 The path up to the Molonglo Gorge