Raymond Terrace is a functional rural service centre located between the Pacific Highway and the Hunter River. Its main appeal lies in the very pleasant Riverside Park, a large green area beside the Hunter River and the beautifully preserved King Street which was the centre of town until it was virtually destroyed by the floods of 1955.

Raymond Terrace is located 169 km north of Sydney via the Newcastle Freeway (M1). It is only 12 m above sea-level and is  26 km north of Newcastle.

When Lieutenant John Shortland's expedition party explored the area in 1797, one of the members was named Raymond. The town took its name from this gentleman and added terrace because the area beside the river had a 'terraced' appearance.

Exploring the Town
There are really three areas in Raymond Terrace that are worth exploring: (i) King Street which was the town's business centre until the major flood in 1955; (ii) Riverside Park and Glenelg Street with St John's Church and rectory; (iii) and Slade and Sketchley Cottage - two historically significant buildings.

King Street
King Street was the business centre of Raymond Terrace from 1840 until the 1955 flood drowned it and the whole town moved around the corner. A telegraph pole along the street to your right, opposite the old Masonic Centre, indicates the level to which the flood rose in 1955 - about 3.5 m above street-level.
The attractive 19th-century timber buildings with elegant verandas are well preserved and give the street a charming coherence. Some date back to the 1840s. The two large trees halfway along the street are, as the sign says, 'marriage trees'. These trees were used by the locals for weddings prior to the establishment of the town's churches.

Riverside Park and Hunter Street
Riverbank Park runs along the bank of the Hunter River. It is located on a site which was previously occupied by a large group of stone buildings, some relating to James King's pottery business. King's wharf and the last of the buildings were demolished in the 1960s. The park has play facilities and is a very pleasant spot for a picnic.
On the corner of William and Hunter Streets is the Junction Inn, now a modern building with pleasant views over the river. The oldest portion (around the corner in William Street) dates from 1836 when it served as King's Hotel as well as the local post office and King's business premises. Although little of the original building remains it is considered the second-oldest hotel in New South Wales. At 3 Hunter Street is Windeyer Cottage, an attractive timber building which dates from the 1880s. At 7 Hunter Street is Geer House, built of sandstone with gables and views across the river. It was constructed for James Cadell in 1845.

River Activities on the Hunter
Raymond Terrace's location on the banks of the Hunter River make it ideal for waterskiing, boating and riverside picnics. There are two boat ramps in town: one off Riverside Park in Hunter Street and another on the northern side of the Fitzgerald Bridge.

Glenelg Street
Flood Marker and Landing Site
At the river end of Glenelg Street, in Riverside Park, a telegraph pole has a flood marker recording the different heights of the floods. At the water's edge is Colonel Paterson's original 1801 landing site.

St John's Anglican Church and Rectory
Located on Sturgeon Street, south of Glenelg Street, is St John's Anglican Church, erected in 1862 and designed by Edmund Blacket, famed for his work on the University of Sydney's Quadrangle. It is built in the Gothic Revival style from sandstone hewn from the local quarry. The separate and larger bellcote was added later. The current bell is from the wreck of the Ceres which occurred off Sydney's North Head in 1835. The rectory (1862) can be seen from Jacaranda Avenue. It has two gigantic pine trees in the grounds

Slade (now known as Coo-ee)
At 12 Swan Street is 'Slade House', a grand two-storey timber dwelling dating from around 1874 and erected by Henry Slade on the site of a cottage owned by a Colonel Snodgrass, the acting Governer of NSW from 1837-1838. Now known as 'Coo-ee' this is a beautiful building with 12-foot high ceilings, ornate cast-iron curlicues along the veranda and balcony (they were removed during World War II and replaced after the war), beautiful stained-glass windows about the doorway and impressive window frames.

Sketchley Pioneer Cottage and Museum
Located at 1 Sketchley Street, opposite Bettles Park, the Sketchley Pioneer Cottage is a rare surviving example of an early colonial pit-sawn split-slab farmhouse. It was built in c.1850 by ex-convict William Sketchley who, aged 19, was transported in 1830 for seven years. After his release he bought land 8 km north of Raymond Terrace and it was there that the cottage was built. Although twice covered by floodwaters Sketchley's descendants remained in the house until the 1970s. "In 1988 a separate Museum Building was designed and built in the Cottage Grounds as a Bicentennial Project, and additions were made in 1994. Displayed are many diverse items from a collection of farm equipment, tools and working blacksmith's shop, to natural sea shells, old bottles, clothes, household and personal items, old radios and office machinery." The Cottage and Museum are open from 10.00 am - 4.00 pm on Sundays. Tel: (02) 4987 2148 or (02) 4987 7661.

Tomago House
Located at 421 Tomago Road is Tomago House, built for barrister Richard Windeyer who bought 30,000 acres of land in the Hunter Valley between 1838 and 1842. Planning an elaborate agricultural estate he purchased 850 acres, drained the swamps near Grahamstown, planted grape vines, sugar cane and wheat, grazed cattle, horses and pigs and began work on the construction of Tomago House, in 1843. Windeyer died in 1847 leaving his wife, Maria, to complete the estate. It became the property of the National Trust in 1986.
Tomago House is an elegant mansion of sandstone shipped by barge from the Raymond Terrace quarry. Its highlights include a marble fireplace, ornate cornices, a central hall with raised roof, sandstone carving about the exterior, frosted glass panels surrounding the door and outstanding plasterwork and cedar joinery. The drawing room and dining room are particularly impressive with huge bay windows looking out across pleasant grounds and French doors opening out to a flagged sandstone veranda with delicate cast-iron columns. The modest chapel in the grounds was designed by Maria Windeyer and her sister and built of sandstone rubble left over from the house's construction. It was intended for the worship of her family, neighbours and the estate-workers. The cedar pews, lectern and joinery are original. Plaques on the wall memorialise Maria, her family and descendants. Their ashes were scattered nearby. The buildings are open every Sunday from 10.30 am - 3.30 pm, tel: (02) 4964 8959. For more information check out https://www.nationaltrust.org.au/places/tomago-house.

Tomago Sandbeds Water Supply Scheme
About 3 km along Tomago Road from Tomago House is the Tomago Sandbeds Water Supply Scheme. The sandbeds are situated on an impervious shingle bed and retain water like a sponge. Wells were dug here from the very early days of European settlement and the water was shipped to Newcastle. Horse-driven pumps were installed in the 1860s to draw the water and fill two 20,000 gallon wooden tanks which were carried to Newcastle by two steamers. Today the sandbeds store about 100,000 megalitres of water. The beds also support a rich and varied flora especially when the wildflowers bloom in spring. For more information check out https://www.hunterwater.com.au/Water-and-Sewer/Water-Supply/Dams-and-Catchments/Tomago-Sandbeds.aspx.

Fighterworld
The Williamtown RAAF base was established in 1941 and a parachute training school was set up in 1951, utilising the Tilligerry Peninsula as the drop area. Today the main attraction at the RAAF base is Fighterworld which is located directly opposite the base's main gates. The website, which provides very comprehensive information about opening times and the aircraft on display, explains that "Fighter World is dedicated to preserving the proud history of fighter aircraft operations in the Royal Australian Air Force. Located just 20 mins drive north of Newcastle ... Fighter World is a totally ‘hands on’ experience. Exhibited in two hangars, visitors can walk-around, touch and look into the cockpits of such famous aircraft as the Mirage III, the Avon Sabre, the Gloster Meteor, the first Vampire jet built in Australia and the mighty F-111. There is a Russian designed MiG-21 jet fighter, Hawker Hunter, WWII Spitfire replica, a Messerschmitt replica and much more. Fighter World also offers the opportunity to sit in the cockpit of a Mirage interceptor and Macchi jet trainer and experience first-hand what it’s like to be one of Australia’s ‘Top Gun’ pilots in today’s hi-tech world. Perched on the Observation Deck you can witness the various aircraft of the RAAF’s premier Fighter Squadrons take-off and land while listening to all the action on the live audio feed direct from the Williamtown Control Tower.
"Inside the main hangar you’ll also find the Norm Forrester Collection. Unique to Fighter World it is undoubtedly one of Australia’s greatest displays of hand built model aircraft ..." For more information check out http://www.fighterworld.com.au.

* The area was originally occupied by the Worimi Aborigines.

* The town's name comes from a member of Lieutenant John Shortland's party named Raymond who explored the area in 1797 and described the 'terraced' appearance of the trees.

* Lieutenant-Colonel Paterson, then Lieutenant Governor of NSW, stepped ashore in 1801 while on a survey expedition of the Hunter.

* Governor Macquarie visited the site in 1812 and 1818 with a view to establishing a new settlement to the north, referring to the site as Raymond Terrace in his journal.

* Cedar-getters were the first Europeans to inhabit the area and they were soon followed by farmers.

* In 1831 King started an experimental vineyard from French, Portuguese and Spanish vines and began making pottery.

* King started more vineyards at Tomago and Seaham and built a winery in 1836.

* James King became a principal founder of the Hunter River Vineyard Association in 1847.

* A courthouse, police station, steam-driven flour mill and punt were built and Raymond Terrace became an important shipping centre in the 1840s.

* Shipping continued into the 1920s but traffic was diverted to New England when the Hunter River began silting up.

* The arrival of industry in the 1930s revived the local economy.

* An RAAF base and civil airport was established at Williamtown in 1941.

* The construction of an aluminium smelter at Tomago in the 1980s increased the local population. 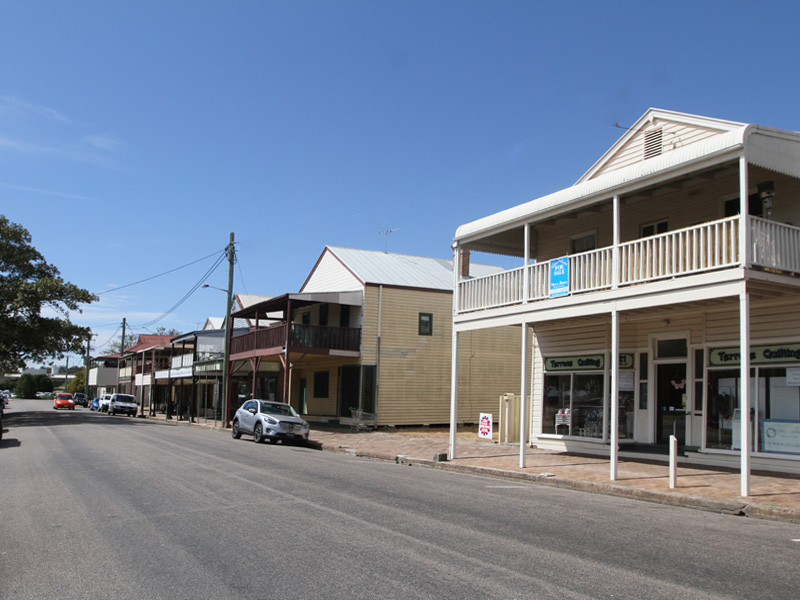 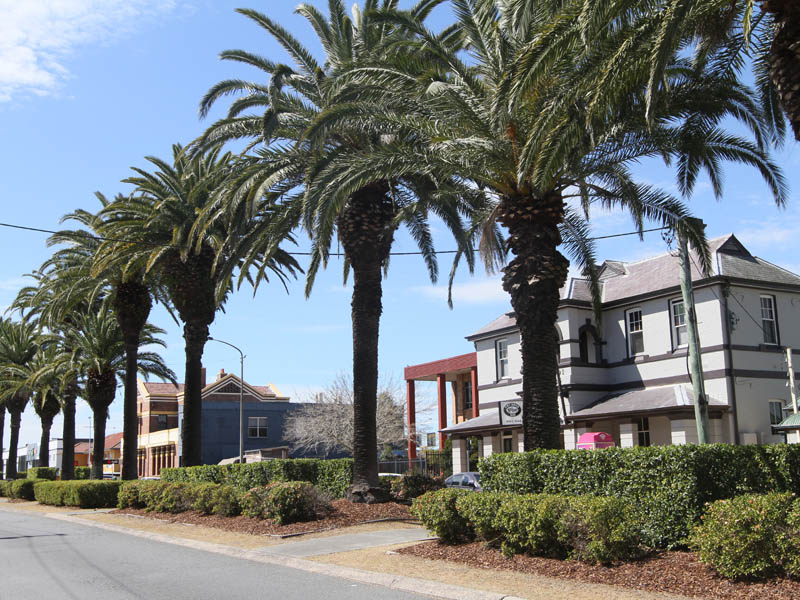 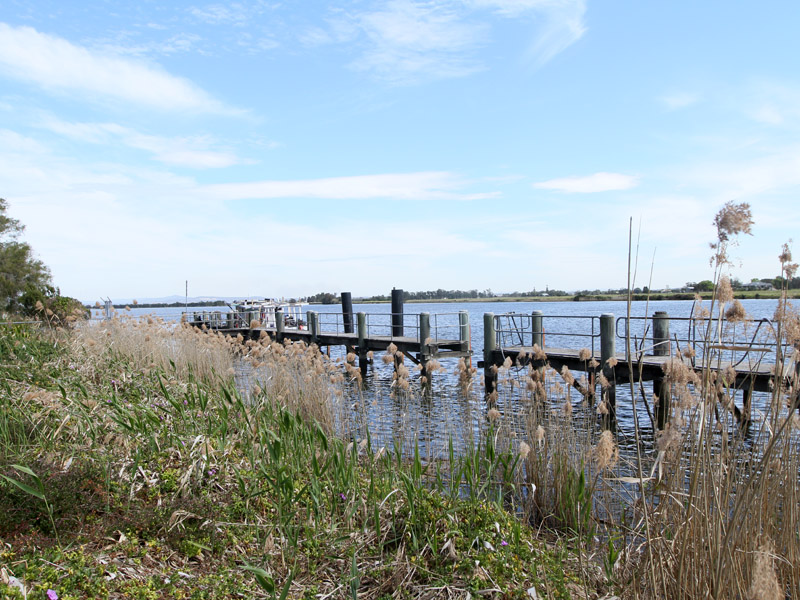 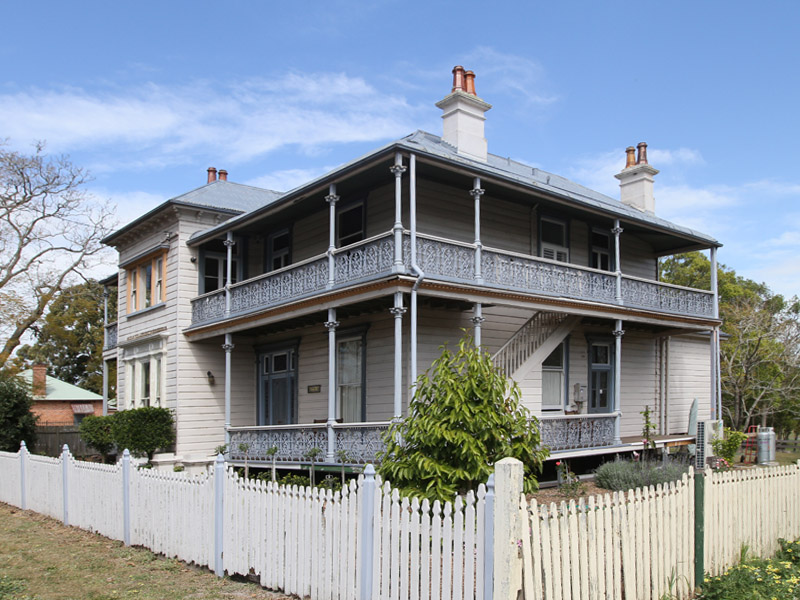 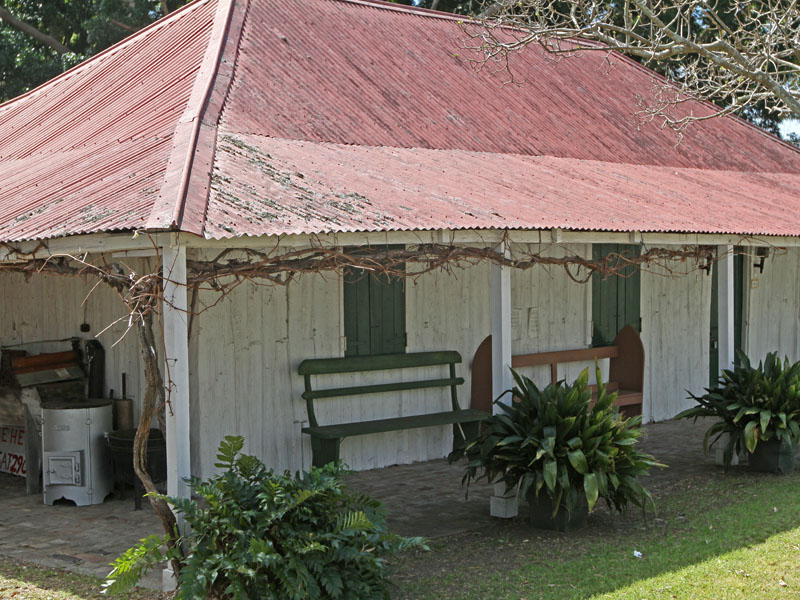 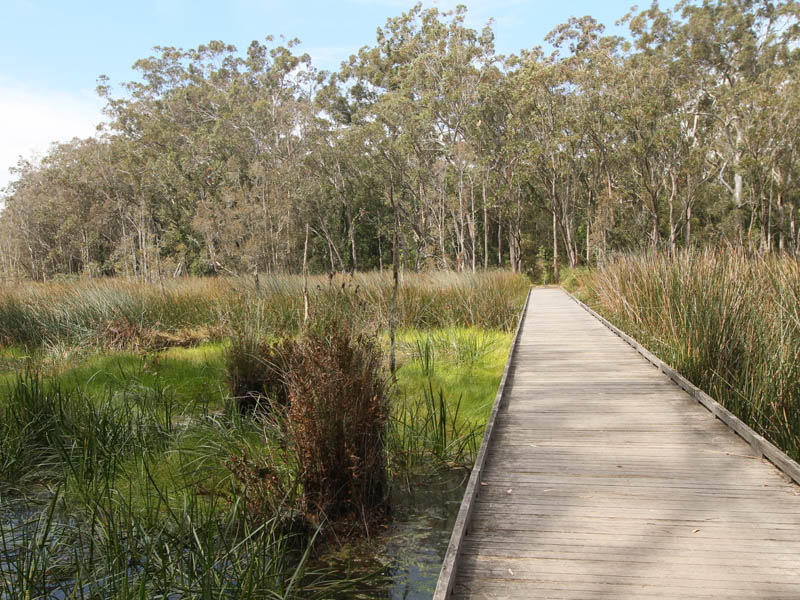 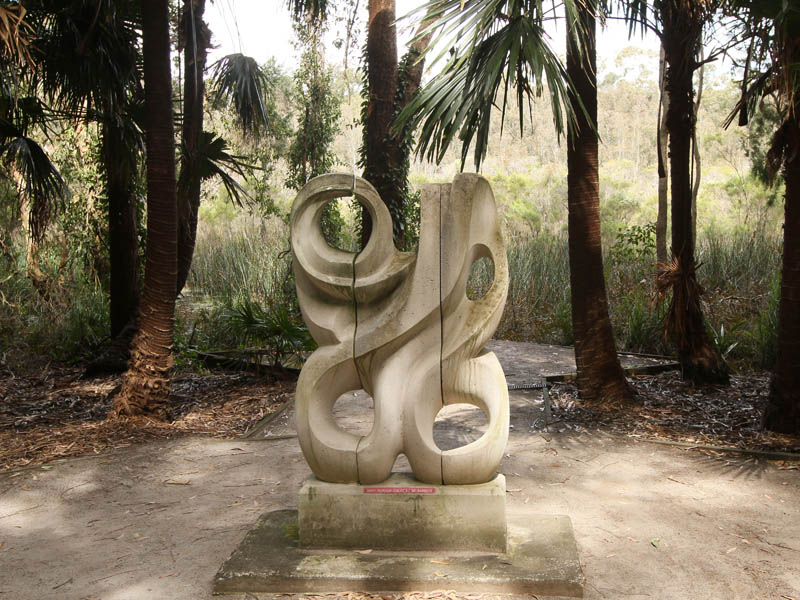 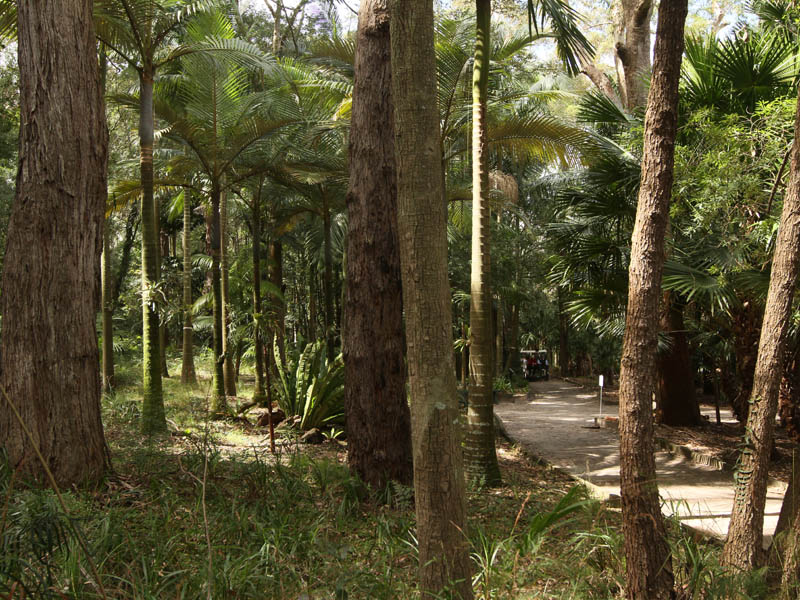