Serviceton is a tiny railway town close to the Victorian-South Australian border which today has been reduced to a railway station and a few houses. This is a town which is a reminder of the importance of state borders before Federation and of a society where trains where the most efficient and sophisticated form of transport.

Serviceton is located near the Victorian-South Australian border 440 km north-west of Melbourne and 293 km south-east of Adelaide.

The railway station was named after Sir James Service, Premier of Victoria from 1883-86. Consequently the town, really a railway town, took its name from the station.

History of the Railway Line and the Border
There was a dispute about the actual border between South Australia and Victoria. South Australia claimed that when the border was surveyed at 141° latitude that the surveyor had got it wrong and that the border had been placed 4 km inside South Australia. As a result a strip of land, 4 km wide, was created until the problem was resolved. After Federation the issue of the state boundary was taken to the Privy Court in London which, in 1911, found against South Australia. In the meantime Serviceton, which was supposed to be on the border, was actually located within the 4 km strip. It was agreed by both states that a border railway-cum-customs station should be built to handle customs and for engine maintenance, refreshments and overnight accommodation. This made sense. The journey from Melbourne to Adelaide, and vice versa, took two days. The station was located in the disputed territory. The line generally followed the overland gold escort route which had been surveyed in 1852 when gold from Victorian diggings was transported to Adelaide.

Railway Station
The town's Late Victorian railway station, located off Elizabeth Street, was built in 1887. The red bricks were transported from Horsham. The cost was £8,449/9/-. The 70 metre platform is a comment on the importance associated with this border station when it was built. Inside the station are the old customs house for processing goods passing from one state to another.
The three level station was huge. The upstairs and the platform area had 15 rooms. These included a kitchen for customers' refreshments, dining area, ladies closet and waiting areas, booking rooms for Victoria and South Australia, general waiting areas and a customs office. In the basement were large cellars for storage, guard areas, a mortuary for bodies being shipped across the border and a lock-up which was used for prisoners who were being transported interstate. Everything needed to be unloaded and put onto another train. It is listed by the Victorian Heritage Council and its significance is recorded as "Serviceton Railway Station is historically significant for its association with the prolonged Victorian/South Australian border dispute, resulting from an incorrect border survey in 1847. The complex was constructed at the location where the border was originally defined, but was subsequently relocated. It is also significant as it includes the original customs offices used for the collection of duties on goods travelling interstate, along with holding cells for prisoners being transferred interstate. The role of Serviceton as a railway town of significance on the border of Victoria and South Australia is reflected in its function as a turn around point for state rail services. Serviceton Railway Station is also significant as an example of a building design that arose from the "Octopus Act" of 1884. Serviceton Railway Station is architecturally significant as a unique and essentially intact example of a major terminal building on the network, and is also a key contributor to the character of the Western line." For more information check out http://vhd.heritagecouncil.vic.gov.au/places/1018.

A Strange Customs Post
The customs office was established in the railway station to ensure duty was paid for goods taken across the state borders but, amusingly, the law was difficult to enforce as the town was in a strip of land 4.5 km in width which stretched along the length of the state border and therefore was "disputed territory". The disagreement over the land began in 1847 when the state border was marked with identifying features which were legally recognised as defining the official state boundary. These marks were supposed to follow the 141st degree of east longitude but, owing to a surveying error, they had all been placed 4.5 km west of the meridian.
Consequently, those bringing goods to Serviceton from South Australia claimed they were still in South Australia and hence owed no duty to the Victorian customs officers (whose stamp bore the words 'Serviceton - Victoria') while those bringing goods from Victoria could claim they were still in that state and hence owed no duty to South Australian customs (whose stamp read 'Serviceton - South Australia'). Smuggling was, therefore, a profitable business for a time. In 1911 the case was taken to the Privy Council in London and resolved in Victoria's favour which is why, today, Serviceton is officially in Victoria.

Tolmer Rest Area
Located on the Western Highway on the Victoria-South Australia border (and opposite Lockhart Almonds) is the Tolmer Rest Area. It is historically significant (although today it is just a rest area on the road between South Australia and Victoria). This is where the gold escort crossed the border in 1852 and 1853. It is named after Alexander Tolmer, then police commissioner of South Australia, who devised the escort and led it on its first three trips. It was intended to reverse the currency drain from South Australia during the Victorian goldrushes by bringing some of the gold back to Adelaide, a town which had been virtually deserted by hopeful prospectors who had all rushed to the Victorian goldfields. It was a successful venture because around £1 million worth of gold passed across the border during 18 journeys in the years 1852 and 1853.

* Prior to the arrival of Europeans the area was home to the Ngargad Aboriginal people.

* The land around Serviceton was first occupied by Europeans in 1846.

* Thomas Short, who established the 'Cove' run in 1849, employed a station hand who turned out to be Dan Morgan, later to become one of Australia's most notorious bushrangers. Upon being dismissed after an argument, Morgan destroyed Short's provisions and stole a horse.

* By 1852 the gold escort route from Victoria to Adelaide was passing through the district.

* Small selectors began to arrive from South Australia in 1877 and began growing wheat.

* The railway arrived in 1886. The town became a major border crossing and an important customs station for goods passing between the colonies of South Australia and Victoria was established. At the time there was a Victorian and a South Australian station master.

* By 1887, when the station was built, there was also two engine sheds but, with the lack of local water, the original water reservoir for the trains was constructed on the boundary line.

* Between 1887-1889 a post office, several general stores, a boarding house and hotel were established and a butcher, hairdresser, plumber, chemist and bricklayer set up premises. The National Bank rented a room at the hotel.

* The local Methodist Church was opened in 1926.

* An Anglican Church was consecrated in 1929.

* Grain silos were built beside the railway line in 1938.

* By 1952 diesel had replaced steam on the railway line.

* The refreshment rooms at the railway station were closed in 1981.

There is no visitor information but information about the town can be obtained from the Windmill Cafe, 41 Commercial Street, Kaniva, tel: (03) 5392 2756.

There is useful information about the town on the Kaniva website. Check out http://kaniva.info/serviceton-station.html. 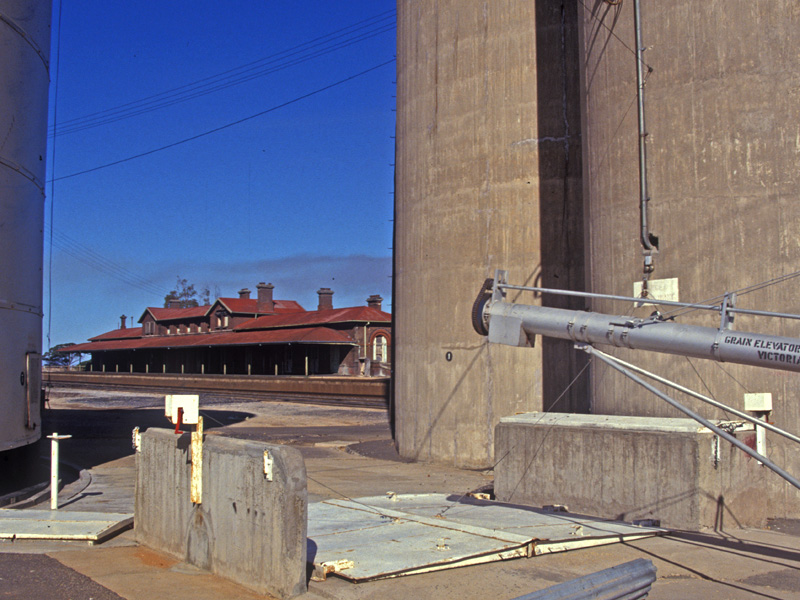 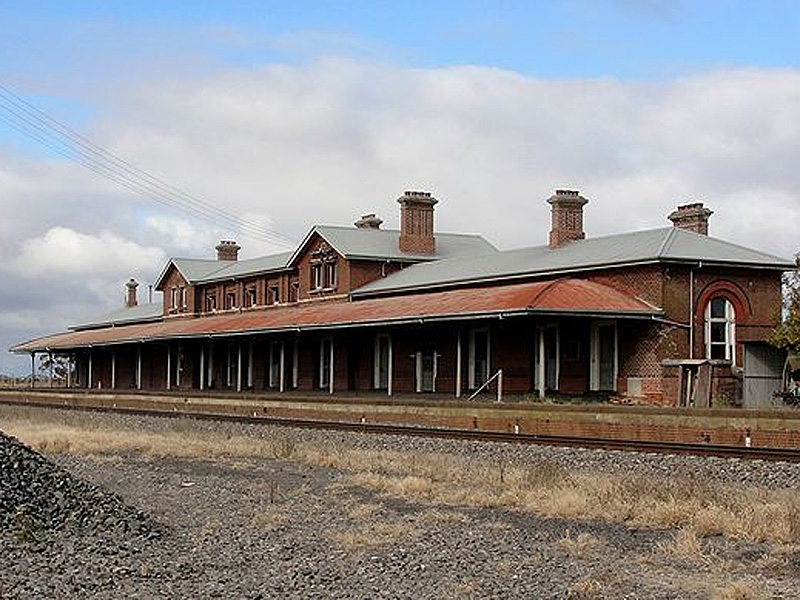