Rural service village famed for its association with The Man from Ironbark.

Stuart Town, known as the "Home of the Man from Ironbark" is a small service centre surrounded by sheep and cattle farming and orchards. The town, originally called "Ironbarks" now comprises little more than a post office, a School of Arts building, an Open Air Museum, a Rural Transaction Centre with an Internet Cafe, and a hotel. Although tiny it is the place where New South Wales premier, Sir Robert Askin, was born and where Sir Isaac Isaac's father worked as a saddler.

Stuart Town is located 34 km south-east of Wellington via Burrendong Way and 317 km north-west of Sydney via Bathurst and Orange. It is 548 m above sea level.

The settlement was originally named Ironbarks, after the trees in the area. It became well known when 'Banjo' Paterson' wrote his famous poem about a simple, rustic man - 'The Man from Ironbark'. The name was changed in 1889 to Stuart Town. It was named after the New South Wales Premier, Sir Alex Stuart.

Ironbark Inn
Built in the late 1880s and originally known as the Carrington Hotel, the Ironbark Hotel. There is a mural in the pub by Rex Newell depicting The Man from Ironbark.

Open Air Museum
An unusual "museum" this is just a collection of old farm machinery, much of it dating back to the early 19th century, laid out in rows, with simple signage like "Mouldboard Plough Used 1920-1940". It is in a paddock behind Boehme's Hall.

Boehme's Hall
Located next to the Open Air Museum and the town oval, Boehme's Hall was built in 1850 by local businessman, Henry Boehme. Over the years it has been used for dancers and as the local picture theatre. Boehme also used the building as a cordial factory and for extracting teeth and setting broken bones.

Yee Lee Store
Yee Lee's correct name was was Wong War Lai. He arrived in Australia in 1888 and when he reached Stuart Town he opened a grocery-general store - Yee Lee General Store. The old Yee Lee store was locally famous because of the richness of its display.  There were hooks in the ceilings where billy cans and domestic utensils were hung. On the left hand side as customers entered there was a grocery section and on the right hand side was drapery, boots and shoes.  At the rear of the shop farm produce  - chaff, oats, bran - was stored. In 1902 Yee Lee visited China and married.  He brought his bride to Stuart Town and they had two sons and a daughter. Yee Lee died in 1936 and his wife in the mid-1940s.  His sons and daughter continued with the store until the daughter married and one son moved to work in Sydney in 1942.  After Yee Lee's wife died shortly after the war, the other brother sold the store and also moved to Sydney. Located in Alexander Street the store remains one of the few buildings in New South Wales that was owned and operated by a Chinese businessman. It is still possible to see the faint outline of Yee Lee General Store on the front of the building.

Town Common
The 400 ha town common can be accessed by crossing the railway line from town. It is possible to camp on the common, to undertake bush walking and bird watching. Be careful, however, as there are over 50 derelict mine shafts and tunnels. It is claimed that the common is ideal for gold prospecting. It is argued that only the easily accessible material was removed and that 90 per cent of the gold in the area remains.

Stuart Town Cemetery
Located on Walllaroi Road to the west of the town, the cemetery was listed with the National Trust of Australia on 30th August 1994. The site was established on 18th November, 1870. Wellington Historical Society has established a register of burials in the area with and without headstones. This listing is a very valuable historic record of the area. Elizabeth Gage has the earliest existing monument as she was buried in 1874. John Henry Smith died in 1918 at the age of 104. The Sloane Vault is the resting place of five of our early pioneers of this district. For more detailed information about the cemetery check http://www.stuarttown.com.au/the-cemetery.html which provides detailed information about many of the graves.

Mookerawa Park and Miner's Hut
Located 11 km north-east of Stuart Town on Mookerawa Road is Mookerawa Park on the shore of Lake Burrendong. On the road to Mookerawa Park there is a replica of an old miner's hut and the remains of an old Chinese oven. The Mookerawa Waters Caravan Park is a good place to purchase a metal detecting map titled Gold Relic Sites - Stuart Town Goldfield.
Mookerawa Waters has picnic and barbecue facilities, camping areas, caravan sites and an amenities block. There are boat ramps for fishing, waterskiing and boating. On the shores of Lake Burrendong it is possible to see echidnas, kangaroos, wallabies and fishing in the lake can provide redfin, catfish, murray cod, silver and golden perch. Check out https://www.inlandwaters.com.au/park/info/mookerawa-waters for more details.

Panning for Gold
The answer is always "Ask the locals" as there are a number of excellent places in the district where gold can be successfully panned. The town common, which is spread across 400 ha, is popular with panners. Splitter's Gully in the wooded area of the common, was the richest part of the local reef. You can try your luck panning in the creeks.

It was the man from Ironbark who struck the Sydney town,
He wandered over street and park, he wandered up and down.
He loitered here, he loitered there, till he was like to drop,
Until at last in sheer despair he sought a barber's shop.
`'Ere! shave my beard and whiskers off, I'll be a man of mark,
I'll go and do the Sydney toff up home in Ironbark.'

The barber man was small and flash, as barbers mostly are,
He wore a strike-your-fancy sash, he smoked a huge cigar:
He was a humorist of note and keen at repartee,
He laid the odds and kept a `tote', whatever that may be,
And when he saw our friend arrive, he whispered `Here's a lark!
Just watch me catch him all alive, this man from Ironbark.'

There were some gilded youths that sat along the barber's wall,
Their eyes were dull, their heads were flat, they had no brains at all;
To them the barber passed the wink, his dexter eyelid shut,
`I'll make this bloomin' yokel think his bloomin' throat is cut.'
And as he soaped and rubbed it in he made a rude remark:
`I s'pose the flats is pretty green up there in Ironbark.'

A grunt was all reply he got; he shaved the bushman's chin,
Then made the water boiling hot and dipped the razor in.
He raised his hand, his brow grew black, he paused awhile to gloat,
Then slashed the red-hot razor-back across his victim's throat;
Upon the newly shaven skin it made a livid mark --
No doubt it fairly took him in -- the man from Ironbark.

He fetched a wild up-country yell might wake the dead to hear,
And though his throat, he knew full well, was cut from ear to ear,
He struggled gamely to his feet, and faced the murd'rous foe:
`You've done for me! you dog, I'm beat! one hit before I go!
I only wish I had a knife, you blessed murdering shark!
But you'll remember all your life, the man from Ironbark.'

He lifted up his hairy paw, with one tremendous clout
He landed on the barber's jaw, and knocked the barber out.
He set to work with tooth and nail, he made the place a wreck;
He grabbed the nearest gilded youth, and tried to break his neck.
And all the while his throat he held to save his vital spark,
And `Murder! Bloody Murder!' yelled the man from Ironbark.

A peeler man who heard the din came in to see the show;
He tried to run the bushman in, but he refused to go.
And when at last the barber spoke, and said, `'Twas all in fun --
'Twas just a little harmless joke, a trifle overdone.'
`A joke!' he cried, `By George, that's fine; a lively sort of lark;
I'd like to catch that murdering swine some night in Ironbark.'

And now while round the shearing floor the list'ning shearers gape,
He tells the story o'er and o'er, and brags of his escape.
`Them barber chaps what keeps a tote, By George, I've had enough,
One tried to cut my bloomin' throat, but thank the Lord it's tough.'
And whether he's believed or no, there's one thing to remark,
That flowing beards are all the go way up in Ironbark.

* Land in the district was first granted to settlers as early as 1832.

* It is claimed that the gold was first found in the 1840s by a shepherd who did not know what he had.

* The settlement was originally known as Ironbark, after the trees in the area. As such, it is the 'Ironbark' mentioned in 'Banjo' Paterson's well-known poem, 'The Man from Ironbark'.

* The first school in the district was established at Stoney Creek in 1856. It was moved to Stuart Town in 1858.

* Gold was discovered at Black Tom's Gully, west of what is now Stuart Town, in 1859 but there was no rush became the finds were small.

* The town came into existence when a goldrush saw prospectors rush to the area in the 1870s.

* It is probable that as many as 6,000 men worked the local goldfields at the peak of the rush.

* Ben Hall and his associates robbed a wine shanty at Mookerawa at one point.

* By 1880 there were four hotels in existence, with another at Mookerawa.

* The first gold dredging in New South Wales was allegedly carried out here in 1899.

* Most mining had ceased in 1914 although some dredging continued until 1958.

* The well-known New South Wales Premier, Robert Askin, spent his childhood at Stuart Town in the early years of the 20th century. He attended the local school in 1914.

* In 1934 the School of Arts building was officially opened.

* The modern village developed in the 1950s when it became the home of those involved in the construction of Lake Burrendong.

* In 2003 the Rural Transaction Centre was opened.

There is a useful local website - http://www.stuarttown.com.au - with information about local activities. http://www.wellington-nsw.com/Stuart-Town.html is also useful and has good photos of the main attractions. 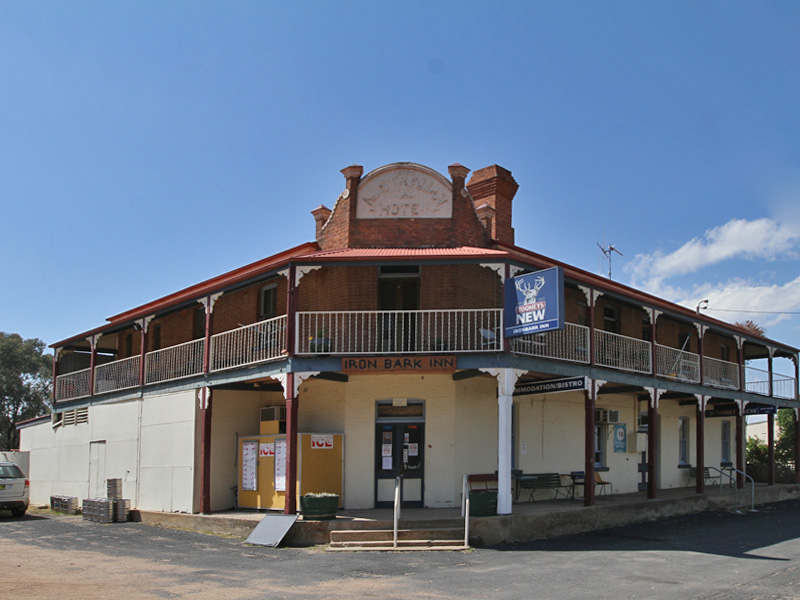 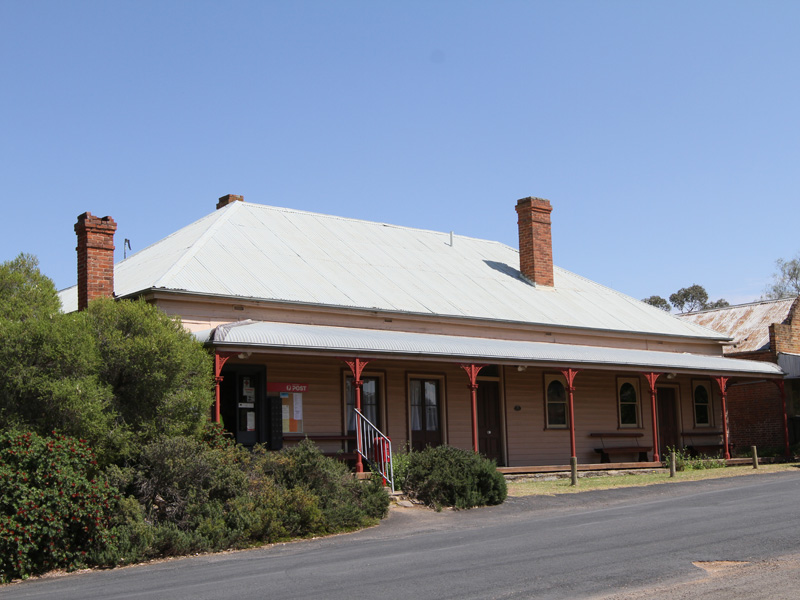 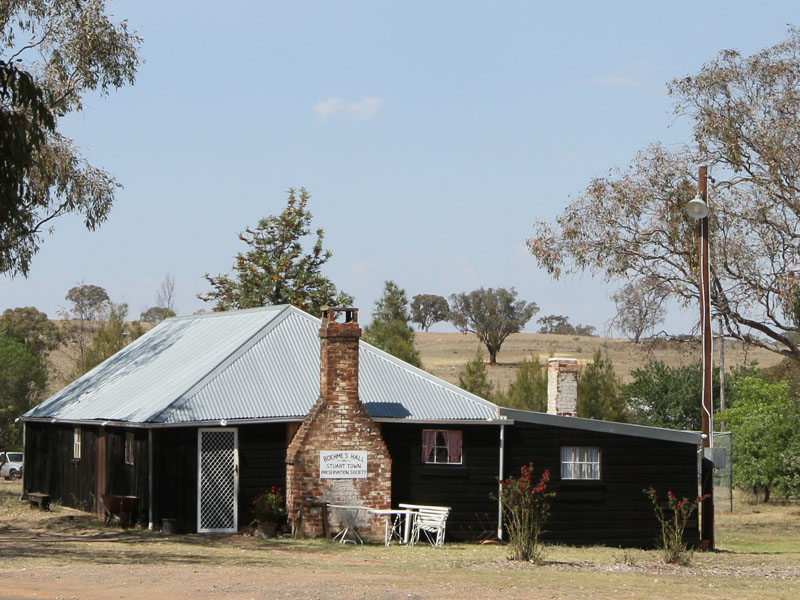 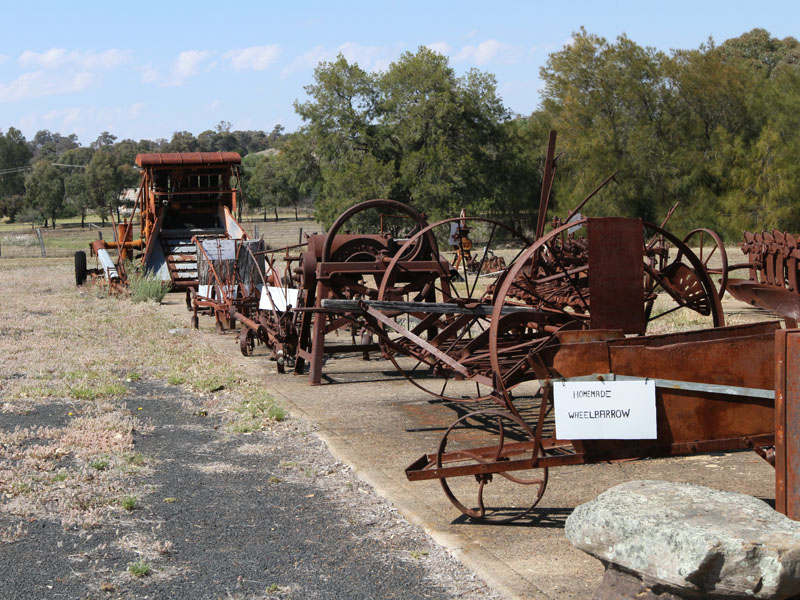