Sleepy holiday and retirement village on the Myall River

There is probably nowhere on the New South Wales coast that hasn't seen development in recent years, but Tea Gardens and Hawks Nest have seen less than most. They still have pockets of 1950s charm which was probably what drew former Prime Minister John Howard and his family to them for holidays.
Tea Gardens is a small township adjacent the northern head of Port Stephens. It is separated from Hawks Nest by the ever-widening mouth of the Myall River, which runs from the Myall Lakes and empties into Port Stephens. In 1974 the two small, sleepy townships were joined by the Singing Bridge, named because it "sings" like a wind harp when the strong south-westerlies blow. The local economy historically revolved around seafood and timber. Today tourism and retirement are the two main "industries" with people seeking this quiet town, well off the Pacific Highway, as a delightful sunny retreat. It is popular for fishing, surfing, windsurfing and kayaking.

No one is certain how Tea Gardens got its name. It was either because the vast Australian Agricultural Company which was granted 500,000 acres in the area in 1826 unsuccessfully attempted to grow tea although it is equally plausible that it got its name because of the abundance of tea-trees along the Myall River.

Lions Park Lookout
A good, elevated vantagepoint is located 2 km north-west of Tea Gardens on Tea Gardens Road (the Myall Way) where the local Lions have built a rest area which has parking, picnic and toilet facilities. It is a vantage point where there are views over both Tea Gardens and Hawks Nest and the two headlands at the mouth to Port Stephens can be clearly seen.

Marine Drive
The Marine Drive is a perfect place for a pleasant walk along the banks of the Myall River. It runs along the riverbank and this quiet frontage is Tea Gardens' most impressive feature with a childrens' park, a swimming pool and pedestrian access to the bridge.

Cycling around Tea Gardens
The great joy for cyclists in this area is that it is very flat and therefore very easy. There is a very useful website which lists a total of eleven cycle tracks ranging from short journeys around Hawks Nest and Tea Gardens through to a 52 km journey from Hawks Nest to Bombah Point Ferry. Check out http://www.teagardensonline.com.au/index_files/CycleBooklet.pdf for a downloadable booklet.

The Ferry from Nelson Bay
One of the modestly priced pleasures of the area is the ferry trip across Port Stephens from Nelson Bay to Tea Gardens. Apart from being a delightful journey it also includes (and they are remarkably reliable - the website says 95% certain to see them) dolphins who seem to enjoy racing the ferry and gambolling in its wake. Not only do travellers get scenic views of the port they also get a free show from the local dolphins. Check out http://www.portstephensferryservice.com.au/web/timetable/ for more information.

Yacaaba Head
Millions of years ago massive volcanic disturbances formed Yacaaba Head. Lava, subsidence and erosion have changed the landscape so that now Yacaaba Head is a remnant of an ancient volcanic peak and the local topography and the rocky outcrops are the products of lava flow.
Is climbing Yacaaba Head worth the effort? Well, yes, but it can be difficult. The views are spectacular and the effort involved is genuinely challenging. The walk starts from the beach at Hawks Nest and heads along the southern end of Bennetts Beach. The first part of the walk is 3 km along the narrow spit which separates Hawks Nest from Yacaaba Head.
At the base of the promontory the track, which has come along the length of the beach, splits into two. A path, the Jimmys Beach Track, leads around the base of Yacaaba to the headland's pebbly southern side where there are views across the mouth of the bay to the southern peninsula of Port Stephens. Dolphins frequent this area and use the area close to shore to rub their bodies on the smooth pebbles. It is known as Dolphin Hole.
The other walk is to the top of Yacaaba Head. There are, in essence, three stages. The first is gradual and progresses through some beautiful bush. It reaches a mid-level viewpoint which looks north-west providing excellent views of Hawks Nest and Tea Gardens. From here the walk becomes seriously steep but it reaches the highest point on the Head where the views are breathtaking and all hard work seems worthwhile. Parts of Hawks Nest are obscured by trees but the view to the west over the hinterland across to the mountain range and south along the coast is superb.
The National Parks website (check out http://www.nationalparks.nsw.gov.au/things-to-do/walking-tracks/yacaaba-headland-walking-track) explains that the walk is 7 km return, takes between 2 hr 30 min and 3 hr 30 min, and describes the walk as "the track climbs steeply and you’ll notice smooth barked angophoras giving way to gnarly banksias and grass trees. As the track veers north, take a break and admire the inspiring views up the coastline. On a clear day, the distant blue ridge line of Barrington Tops is visible. The track gets rockier and steeper, but along the forested ridge top you’ll be treated to coastal views of Seal Rocks and Tomaree Headland. Out to sea, Cabbage Tree Island, known as John Gould Nature Reserve, protects the only known breeding colony of one of the world’s rarest birds; the Gould’s petrel."

* Prior to the arrival of Europeans the area was occupied by the Worimi Aborigines.

* The Australian Agricultural Company (AAC) were granted half a million acres including Tea Gardens in 1826 and a base of operations was established at present-day Carrington with 80 settlers, 720 sheep and some horses and cattle.

* It was reputedly the AAC's failed attempts to grow tea that created the name, Tea Gardens,

* Chinese assistants were employed by AAC as advisors on the production of tea. They also acted as gardeners growing vegetables for the company settlements.

* The mouth of the Myall near Tea Gardens was traversed by a punt which, until 1928, was the only access to Hawks Nest.

There is a useful local website - http://www.teagardens.nsw.au - which lists most of the services available in the town. 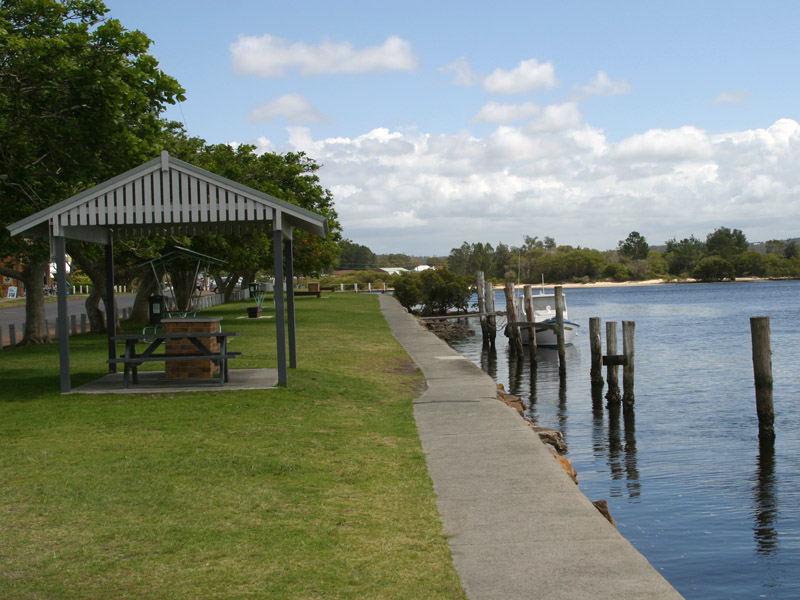 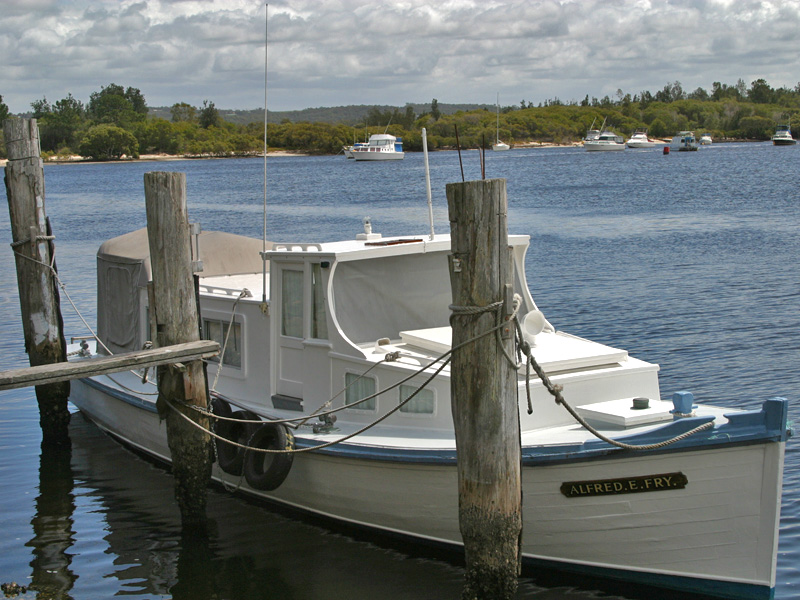 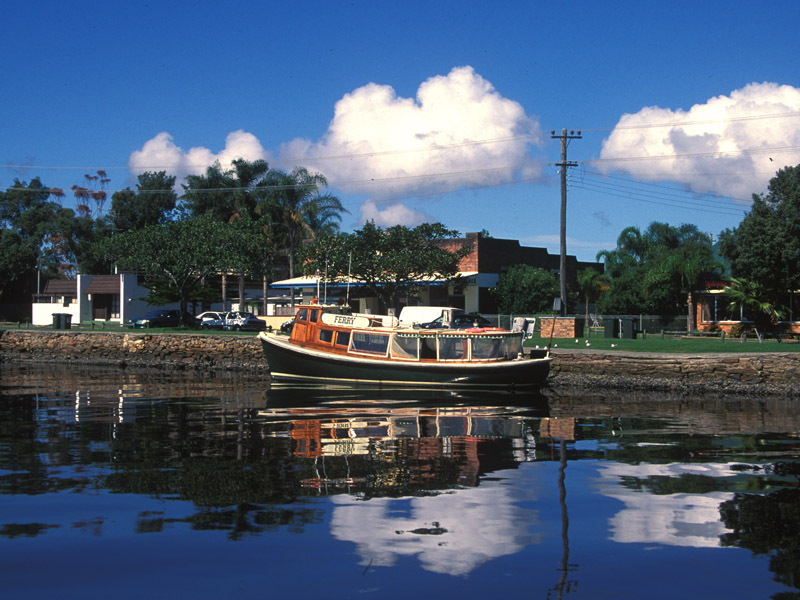 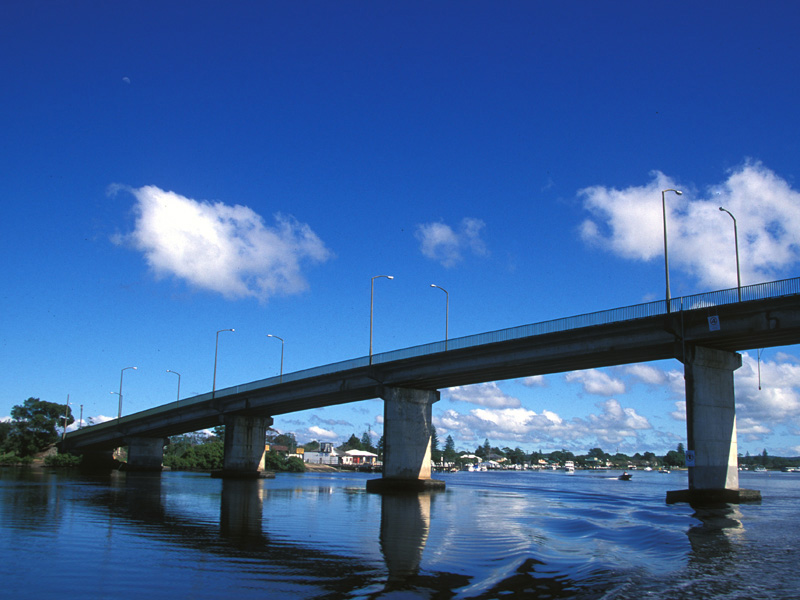 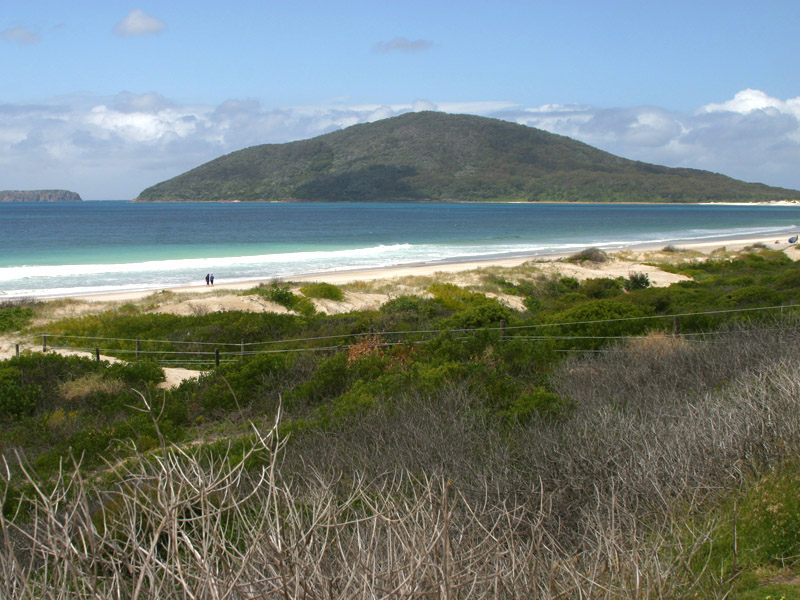