Popular daytripper town for holidaymakers and surfers from Melbourne and Geelong.

While Bells Beach, just a few kilometres down the coast, is the most famous surfing beach in Australia, it is fair to say that Torquay, because it is the largest township in the area, is often seen as the centre of the area's surf culture. Certainly it has the Surf World Museum celebrating Australian surfing culture; it is the place where the two iconic surf brands - Rip Curl and Quicksilver - originated; and it is a place where surfers from all over the world congregate to try their skills in the sublime waves which break on the beaches which stretch south from the town. On another level Torquay is a seaside holiday resort and in recent times it has become residential satellite of Geelong.

Torquay is located 104 km south-west of Melbourne and 22 km south of Geelong via the Surf Coast Highway. It is recognised as the eastern starting point of the Great Ocean Road.

When the district was first settled in the 1880s the town was known simply as Spring Creek but by 1892 it had been renamed Torquay after the famous English holiday resort town of Devon. It is now accepted that one of the district's earliest settlers, James Follett, was responsible for the name change. He had grown up Torquay, Devon.

Surf World Museum
Located at Surf City Plaza, Beach Road, Torquay and open from 9.00 am - 5.00 pm seven days a week, Surf World Museum, by its own admission, "celebrates the story of surfing". Opened in 1993 the permanent exhibitions include The Board Room which provides a history of surf boards from "from solid timber historic surfboards, through hollow plywood, balsa and fibreglass, to the modern lightweight composite construction of today’s high performance surfboards";  the Australian Surfing Hall of Fame which not only records the history and achievement of Australia's greatest surfers but has surfboards ridden by the surfing heroes; the Theatre offers regular screenings of some great surfing performances by some of the champions of surf; the Life Surf Board Shaping area actually provides a real life experience where gifted surfboard designers actually make surf boards while the public watches; Surf Culture celebrates the unique lifestyle associated with surfing and as Surf World explains "Along with surfboards, historical images, artefacts, clothing, music and surf movies are all well represented in our surf culture area. You can even walk through a decked out Kombi van that recalls memories of time spent with friends, on epic surfing adventures and trips along the coast"; and there is also a comprehensive archive of surfing memorabilia. For more information tel: (03) 5261 4606 or go to http://www.surfworld.com.au.

SurfCity Plaza
It is not normally the case that one of a town's major attractions is the local Plaza but, apart from being home to both the Visitor Information Centre and the Surfing Museum, SurfCity Plaza is recognised as the best place in Australia if you are planning to buy surfboards, surf equipment and surf-related products - Ripcurl, Quicksilver and Piping Hot. It is a wonderland for the surfing enthusiast and the home of great surfing gear.

The Beaches
From Point Impossible to Point Addis is essentially a series of beaches which have attracted holidaymakers (and more recently surfers) since the late nineteenth century. Not surprisingly they are very popular in summer and quiet in the winter months. The beach-walker heading south-west will pass a stretch of Zeally Bay which is known locally as Fisherman's Beach with a boat ramp and sailing club. Then beyond Yellow Bluff, where there are cypress trees and picnic grounds, is Front Beach, a family  beach with lawns and an esplanade and beyond is Point Danger with views north to Point Impossible and south to Bells Beach. Beyond Point Danger is Torquay Surf Beach (known as Back Beach), which has a surf life saving club, and Jan Juc Surf Beach, a noted surfing area. Beyond Jan Juc is the famous Bells Beach.

Sundial
Located behind Fishermans Beach near Deep Creek this is no ordinary sun dial. It was designed by local artists, Clare Gittings and Glenn Romanis, is characterised by ceramic tiles some of which are in Aboriginal motifs, and employs the Analemmatic sundial technique which basically means that, on a sunny day, you stand and your shadow tells the time for you. It is near Deep Creek at the northern end of Fisherman's Beach and is part of a particularly beautiful section of the coast.

Tiger Moth World
Tiger Moth World is located at Torquay Airport, 325 Blackgate Road. It is a theme park celebrating the glories of the 1930s Tiger Moth biplane. This is where you can watch Tiger Moths in action; take scenic ride in a Tiger Moth along the coast to the Twelve Apostles; try your hand at skydiving or book a thrill-seeking exercise in aerobatics.

Apart from the joy of flying in an historic plane there is the Torquay Adventure Park which offers mini golf, flying fox, bicycles, canoes, paddle boats, playpark, volleyball facilities, the Islands of Surprise, the AMAZEing ship Jolly Roger, mini soccer and the "Moth Balls" Museum. Tel: 03 5261 5100) or check out http://www.tigermothworld.com.au for rates. It is open from 10.00 am - 5.00 pm daily except Tuesday and Wednesday.

1. Breamlea to Point Impossible
Starting from the car park at Bancoora SLSC it is 3.5 km, takes around 90 minutes and traverses little-used beaches. Not surprisingly it can be difficult in high tides and large seas.

3. Point Danger to Jan Juc
Starting at Point Danger Car Park this walk can be around the cliffs or along the beach. It is impassable on the beach at high tide. The distance is 2.5 km and it takes around one hour.

4. Jan Juc to Bells Beach
There is a good clifftop path starting at the Jan Juc Car Park in Carnarvon Street and heading 4 km south to Bells Beach.

5. Bells Beach to Point Addis
A longer walk starting at Bells Beach Car Park this 7 km walk takes around 3 hours, is strenuous but has spectacular coastal views from the cliffs as well as sandy bays, forests and coastal heathlands.

6. Southside
Leaving from Southside Car Park this is a short, 600 metre walk down a cement path to Southside Beach. It is an easy walk that takes around 30 minutes. The views are spectacular.

7. Ironbark Track
A strenuous 7 km return walk from Ironbark Basin car park, this takes around 3 hours but expect to experience the cliffs in the area which are some of the highest in Australia.

8. Point Addis Koorie Cultural Walk
Located 100 m north of Addiscott Lookout it is 1.6 km return, takes around 1 hour and is listed as moderate difficulty. It is an interpretative trail with signs explaining the way the local Aborigines lived in the area.

* Prior to European settlement the area had been occupied by the Wathaurung Aborigines.

* As early as the 1860s day trippers and picnickers were coming to the area from Melbourne for holidays and short breaks.

* One of the earliest settlers in the district, James Follett, arrived in 1871. His home was Torquay in Devon.

* When the first land was sold in the mid-1880s the locality was known to Europeans as Spring Creek, after the rivulet at its south-western edge. It soon became a popular holiday spot for residents from Geelong and Melbourne who initially travelled to the area by Cobb & Co coach.

* In 1891 the Canadian clipper, the Joseph H Scammel, ran aground 400 metres offshore. The wreck led to the construction of a lighthouse at Aireys Inlet.

* The settlement was renamed Torquay in 1892 reputedly at the suggestion of James Follett.

* It became a popular holiday destination in the 1920s leading to the building of a golf course, some tennis courts and a bowling green.

* Development of the town in the 1970s saw its population increase dramatically.

* Today Torquay is part of a continuous holiday coast development south of Geelong.

The Visit Melbourne site has a lot of useful information about Torquay. Check out http://www.visitmelbourne.com/Regions/Great-Ocean-Road/Destinations/Torquay. There is an excellent guide book on the entire coast. Check out http://www.rodneyhyett.com.au/great-ocean-road-guide-book.html for details. 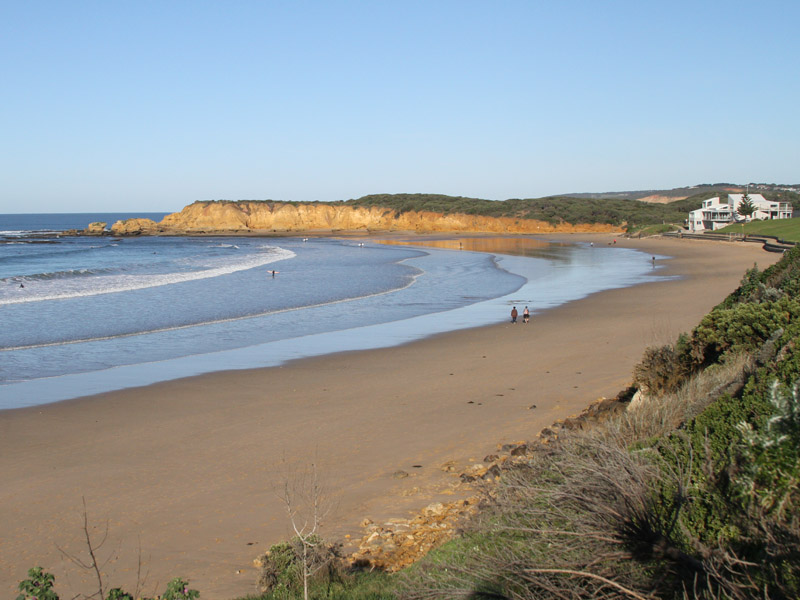 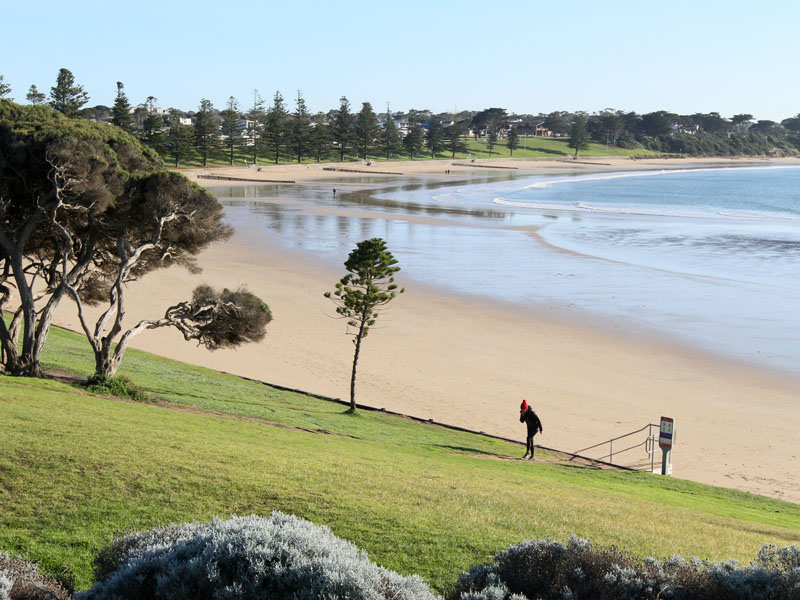 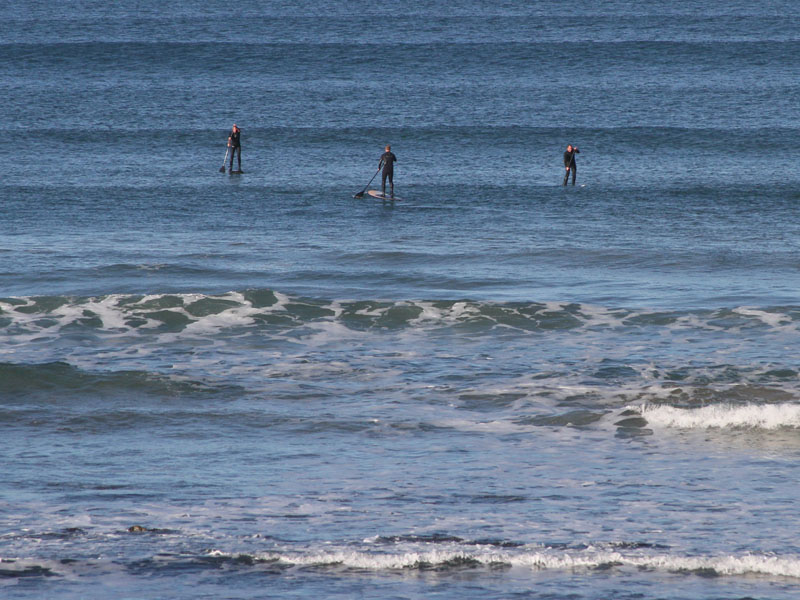 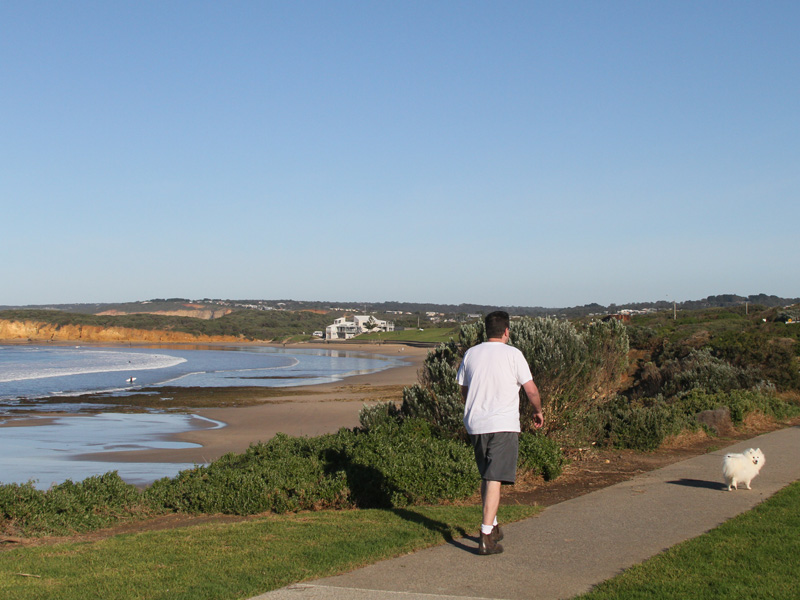 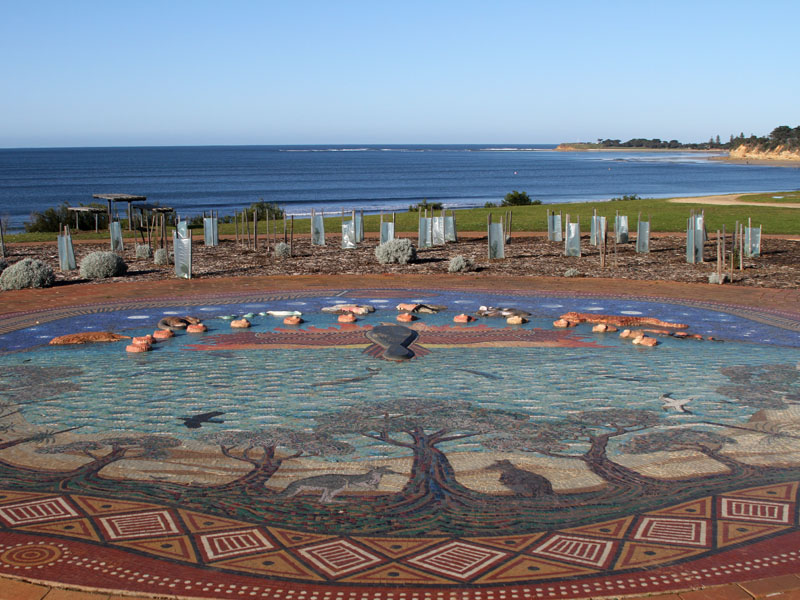 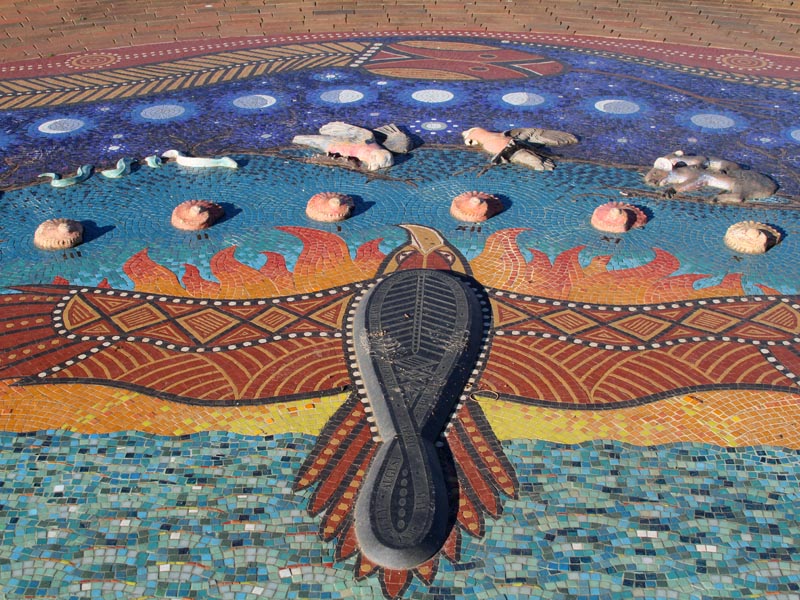 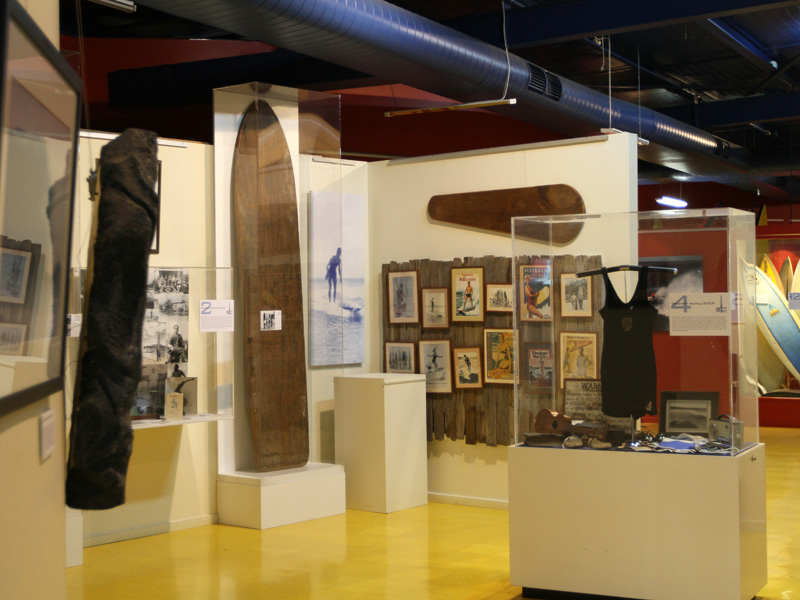 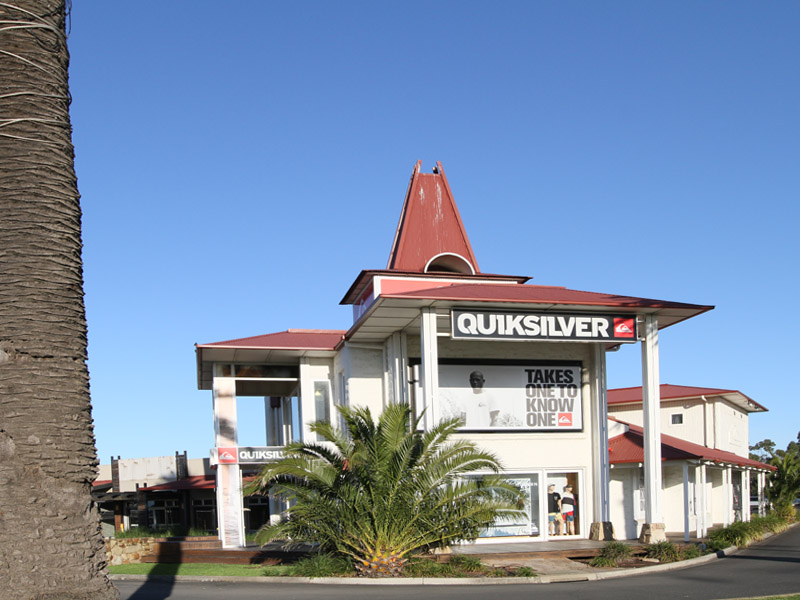 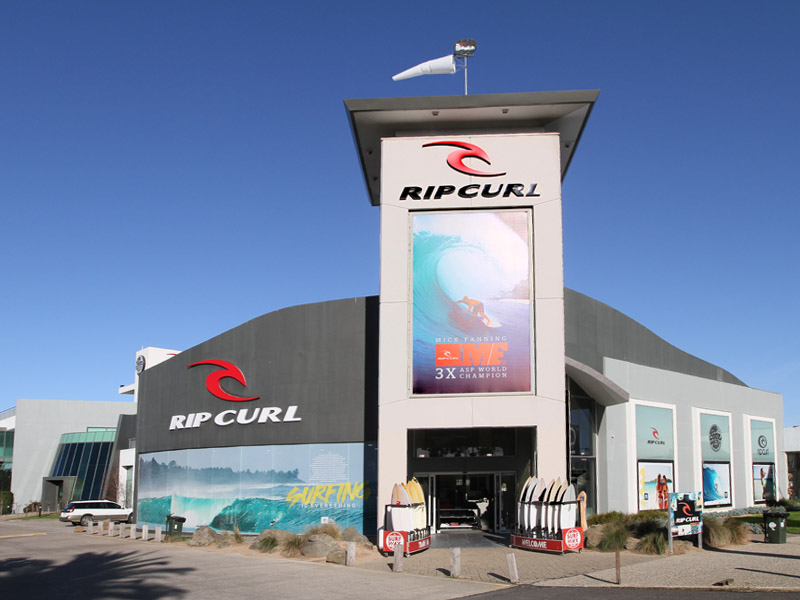