Quiet holiday town on the coast of the Spencer Gulf

The small holiday and fishing town of Tumby Bay is characterised by a 10 km long, narrow arc of beach; a jetty which juts out into the bay; and a run of modest holiday and retirement homes which edge the beach. Tumby Bay is much more than a transitory holiday destination. The Tumby Bay Yacht Club, the large number of permanent dwellings, the sense of permanency created by the lawn and the pine trees which lie between The Esplanade and the beach, all give the town a sense of solidity which other holiday towns don't possess.

Tumby Bay is located 601 km west of Adelaide via Port Augusta. It is 295 km south-west of Port Augusta and 49 km north of Port Lincoln.

Tumby Bay was first explored by Matthew Flinders in 1802. He named the bay and a nearby island after the village of Tumby in Lincolnshire, England. Tumby lies 23 miles north of Flinders birthplace, Donington, Lincolnshire. In 1984 the name was expanded from Tumby to Tumby Bay.

Holiday and Seaside Activities
Tumby Bay offers the usual range of seaside holiday activities - swimming in the bay, skin diving, fishing, mooching along the beach and learning the fascinating early history of this modest wheat and fishing port.

Tumby Bay Mangrove Boardwalk and Nature Trail
The Tumby Bay mangroves are, reputedly, the southernmost mangroves in Australia. There is a boardwalk with interpretative signage.It is located at the southern end of town running off Berryman Street.

Foreshore Walk
There is a pleasant 4.5 km walk along the foreshore from the northern end of town, past the town jetty, along the beach and finishing at Elfrieda Driver and the marina. One of the many interesting sights in town is the old tram which is now located over the road from the jetty in a shed with other pieces of historic equipment. It was originally used to take bags of wheat from the drays to the boats berthed at the end of the pier.

Tumby Bay Jetty
The District Council of Tumby Bay website suggests a walk along thejetty and notifies careful viewers that "Under our jetty you will find some fascinating residents some quite rare. The underwater terrain naturally divides the structure into 3 sections. The first is a short sandy stretch, mostly fairly shallow, the second is filled with seagrasses and at the end of the jetty - rubble and timber are found scattered on the bottom. Divers look carefully in the sandy section as a lot tend to pass over it. Diverse creatures such as stingrays and seamoths can be found here. Unless you know what you are looking for the strange bony bodied seamoth, which has a turned down snout and is sand coloured, can be very hard to spot ... As the water deepens the masses of seagrass are quite apparent from the surface as a dark stain. Large schools of Old Wife (Enoplosus armatus) can be seen here, as well as moonlighters (Tilodon sixfasciatum) and various species of gobbleguts, cowfish and puffer. Leather jackets hide in the weed, disappearing the moment you recognise them. Near the end of the jetty where the bottom becomes silty and there are logs and other debris, the small bottom dwellers have plenty of nooks and crannies to hide in. Here you might find a large octopus or the eggs of the sand octopus waiting to hatch. Even the mantis shrimp, normally a crustacean of tropical waters, has been sighted here. Divers are still just discovering our hidden wonders."

Memorial to Robert Bratton and Brattonising
On Tumby Terrace opposite the Sea Breeze Hotel and the Police Station is an unusual monument (a miniature plough) to Robert Bratton, Overseer of Works, Tumby Bay. Bratton used a much larger version of this plough, which had been invented by a local tractor driver named Ferguson, to build roads through the harsh mallee environment of the Eyre Peninsula. The technique was to plough until a layer of clay was reached. Limestone rocks were then laid and the surface was then sealed. The method became so successful and so widely used that it eventually became known as the Brattonising system of road making.

The Excell Blacksmith & Engineering Museum
Located at 6 Barraud Street, and open from 2.00 pm - 4.00 pm on the fourth Sunday of each month. It is the original Excell Blacksmith and Engineering Workshop which operated in Tumby Bay from 1935-1976. The interest in the museum lies in the fact that it is the home of the Brattenising Plough which was patented and built in Tumby Bay and used around the state of South Australia. The Museum contains machinery and tools which were used by the Excell Family, including an historic DC Welder, the old forge, a section where a wheelwright worked and an upsetting machine. There is a plough which was used to construct the road across the Nullarbor Plain. For more information check out the excellent http://www.excellmuseum.org.au website. Or contact either Ian, tel: 0429 635 648; David, tel: 0427 215 293; or Rex, tel: 0418 335 206.

Tumby Bay Rotunda
In 1908 an Edward Gregurke formed a brass band at Tumby Bay. By 1910 the publican at the Tumby Bay Hotel had built the band rotunda which were part of a leisure complex with a croquet court and tennis courts. By 1958 the rotunda was enclosed and used as the croquet club house. Then in 1983 it was turned into an art gallery and used by a local art group. IN 2004 a mural was painted on the outside walls.

Tumby Street Art
In recent times the town has been enhanced by impressive examples of street art - notably murals. Check out the silos mural painted by Martin Ron (Ron Muralist) from Buenos Aires, Argentina. It is a mural of two boys jumping from the Tumby Bay jetty and was inspired by a famous Robert Lang photograph which captured the joy of summer around the Eyre Peninsula. There was also the Colour Tumby Street Art Festival in 2018 which resulted in eight murals painted by some of Australia’s leading street artists including Adnate, Andrew J Bourke, George Rose, Lisa King, Smug, Dvate, Kitt Bennett and local street artist James Pedler. Check out https://www.facebook.com/colourtumby.streetart and https://colourtumbystreetart.com for more details. The website includes an excellent map to guide visitors to the murals.

Koppio Smithy Museum
Located west of the tiny village of Koppio, which lies between Tumby Bay and Port Lincoln, the Koppio Smithy Museum is 30 km south west of Tumby Bay at 1951 Koppio Road. The Koppio Smithy Museum, which was opened to the public in 1968, takes its name from the blacksmith's shop which was built on the site by Tom Brennand in 1905. Today the Brennand's cottage and blacksmith's shop are part of a huge complex of historical buildings and machinery. The website explains that the complex includes: "the Koppio one-teacher schoolhouse (1934 to 1970) also featuring a unique collection of very early Aboriginal artefacts, a 1910 Port Lincoln tailor shop, Bank of Adelaide building, White Flat Post Office (reportedly the smallest Post Office in the State, Heritage Hall (a wonderful collection from the home of the Jericho family and a range of display sheds covering Tractors & Farm Machinery, stationary engines, Shearing, Grain Story, Hay Story, vehicles and Print Room. The Koppio Smithy Museum is so rich in artefacts that an enthusiast could easily spend a day inspecting the diverse exhibitions. The Museum is open from 10.00 am - 5.00 pm from Tuesday to Sunday. Tel: (08) 8684 4243. For more information check https://www.nationaltrust.org.au/places/koppio-smithy-museum.

Tod River Reservoir and Museum
Located 10 km south of Koppio and 27 km north of Port Lincoln is the Tod River Reservoir. It is a vital part of the history of the Eyre Peninsula because the Tod River is the only reliable river on the entire peninsula. There is a museum - the Tod River Reservoir Museum - which is worth visiting for the unusual EWS Heritage Display. The great breakthrough for the Eyre Peninsula was the creation of the Tod Reservoir. In an area of some 8 million hectares (the size of the peninsula) the Tod is the only river of importance and consequently the damming of the river was the economic saviour of the peninsula. In the years between 1918-22 the South Australian Government built a dam on the river and in the 1920s pipelines were built to Minnipa, Ceduna and Port Lincoln. The Tod River Reservoir was completed in 1922. It has a capacity of 11,300 megalitres and covered an area of 134 ha. Water was pumped by the Tod River Pumping Station to Knots Hill Reservoir from which it moved by gravity through the Tod Trunk Main to Ceduna a distance of 386 km. Water was also pumped to the summit tanks to feed the east coast main as far as Cowell or a southern branch main to Port Lincoln. Sadly the reservoir is no longer supplying water to the Eyre Peninsula due to the increase in salinity. This has been an inevitable consequence of land clearance which has gone on since 1930. The Museum is open from 9.00 am - 4.00 pm Monday to Friday. The area around the reservoir is popular for picnics and is open from sunrise to sunset.

Charter Trips to Sir Joseph Banks Group Marine Park
The Sir Joseph Banks Group are a unique marine sanctuary located 12 nautical miles east of Tumby Bay. They are a breeding ground for seabirds, sea lions, dolphins and fish and they are famed for the excellent fishing for the King George Whiting. The islands offer beautiful sheltered bays, seagrass meadows, golden sandy beaches and coral, sponge and inverebrate reefs teeming with marine life. One of Tumby's special attractions is a charter trip to the islands which were named by Matthew Flinders after Captain James Cook's botanist. The islands were originally used to graze sheep but today they are a conservation area where Southern Ocean birds such as Cape Barren geese and albatrosses as well as seals, sea lions and porpoises can be seen. Check out http://www.fishtumby.com.au/home which offers a full day's fishing out near the islands and an overnight adventure where visitors camp on the beach. For more information about the islands check out http://www.environment.sa.gov.au/marineparks/find-a-park/eyre-peninsula/sir-joseph-banks.

* Prior to European settlement the area was inhabited by the Nawu Aboriginal people.

* Tumby Bay was first explored by Matthew Flinders in 1802. Flinders named the bay and a nearby island after Tumby in Lincolnshire, England.

* The first settlers moved into the area in the 1840's. They were wheat and sheep farmers.

* In 1854 a farmer named James Provis took up land around the bay.

* Until the 1890s the area was agricultural. One early report describes: 'People who came to Tumby Bay in 1858 were carried ashore from sailing boats. Sandhills, scrub and black "wurlies" were the only objects that met the eye ...

* By 1874 the first jetty, being 134 metres long, had been built but there was permanent settlement.

* In 1900 the town was gazetted but it was only a port where supplies could be landed and bags of grain could be shipped out.

* The first town council meeting was held in 1906.

* The following year a report painted a wild picture of the town: "The new buildings were hidden by scrub and people had to clamber over low sandhills to reach them ... When the institute was erected in 1907, it was thought the occasion warranted something extra in the way of ceremony, so the Premier was invited to perform it. The ceremony took place at night, and in case the Premier and his party should get lost in the scrub before reaching the building, lanterns were hung in bushes along the route."

* In 1922 the Tod Reservoir was completed. It provided reliable water to the whole of the Eyre Peninsula.

* In 1984 the name was formally gazetted and expanded from Tumby to Tumby Bay.

* In 1999 the original jetty was dismantled and replaced with a new commercial jetty.

There is a useful local website. Check out http://tumbybay.com. 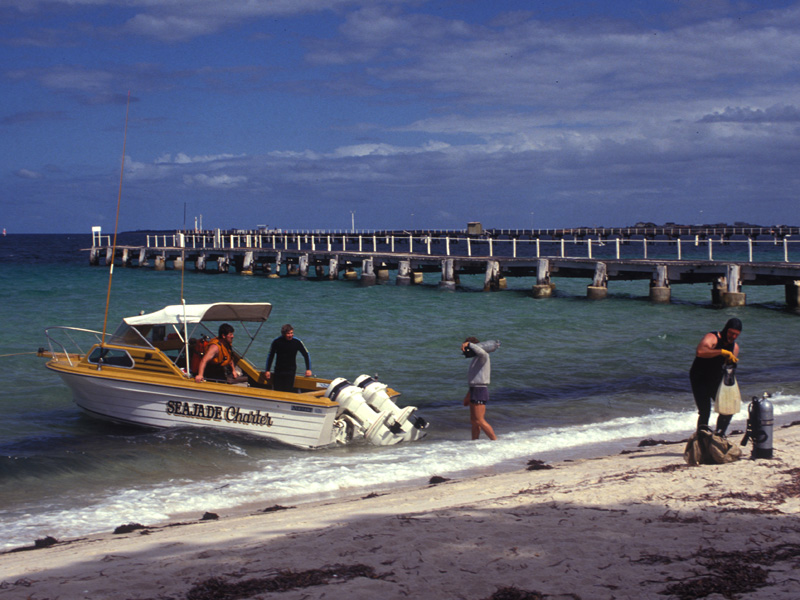 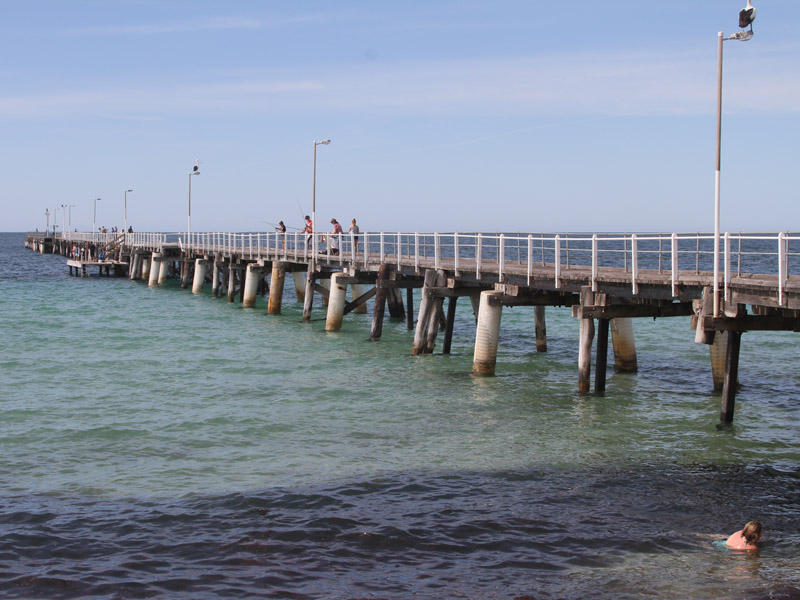 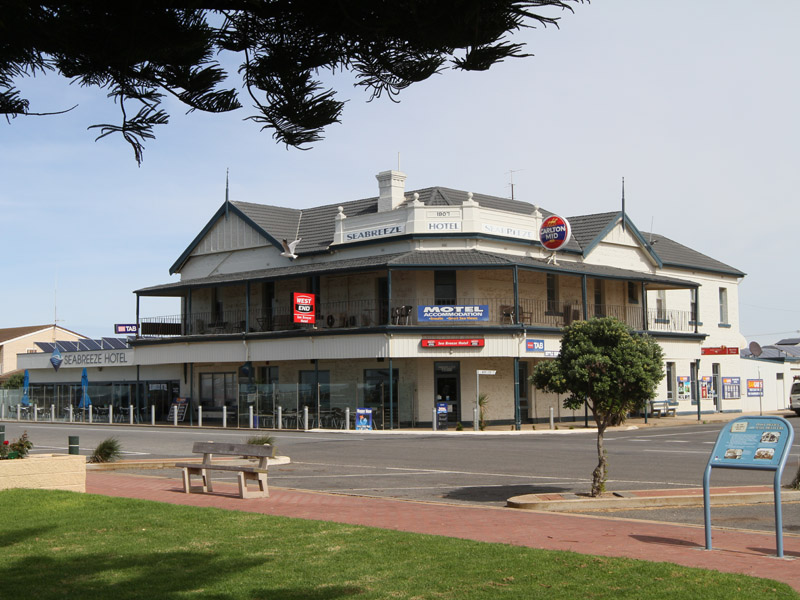 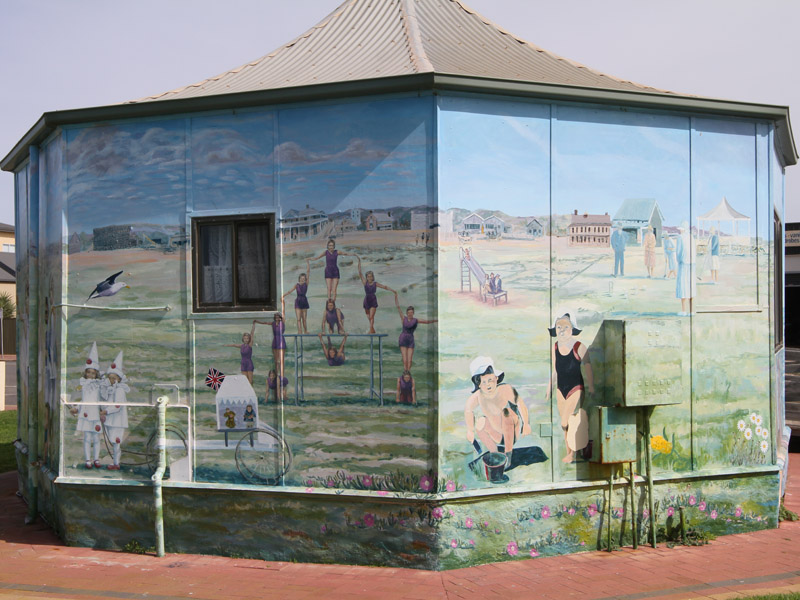 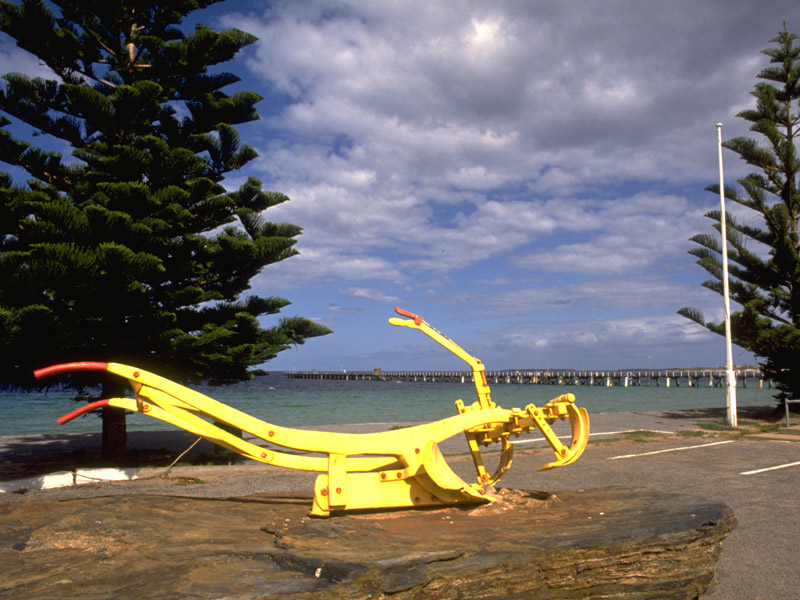 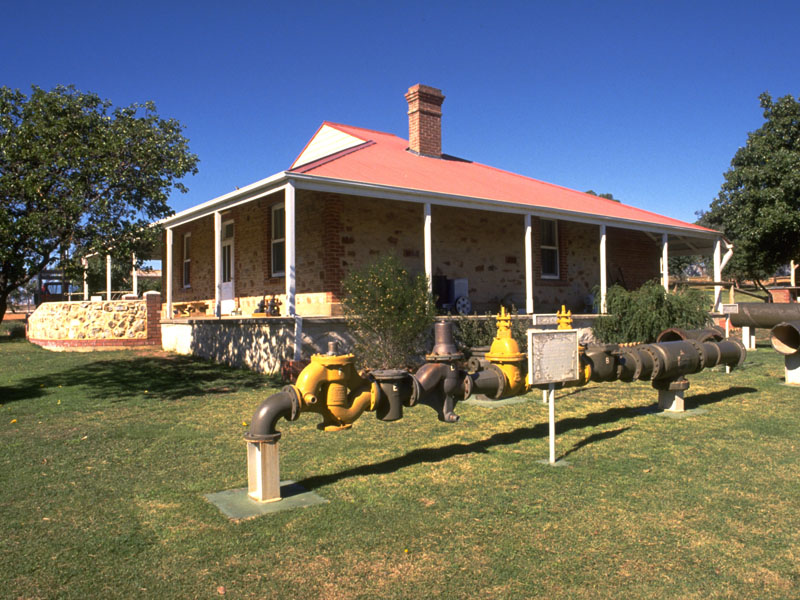 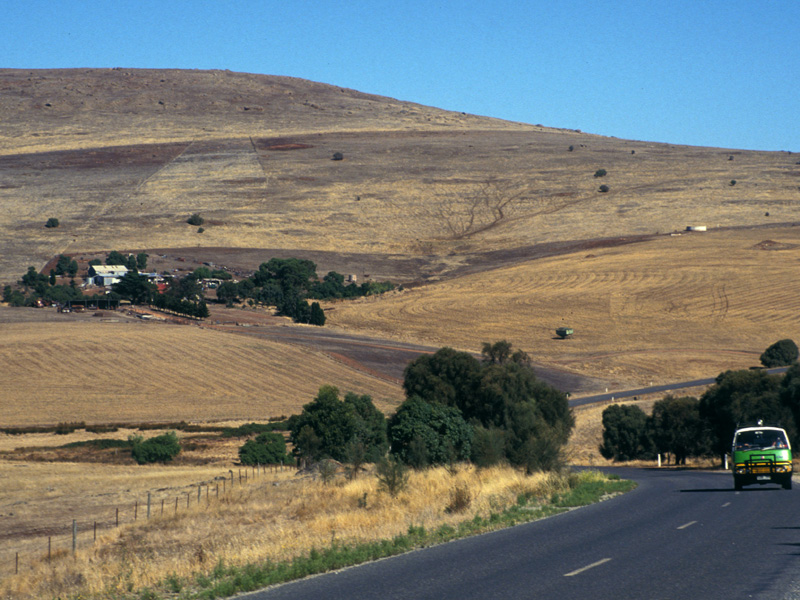 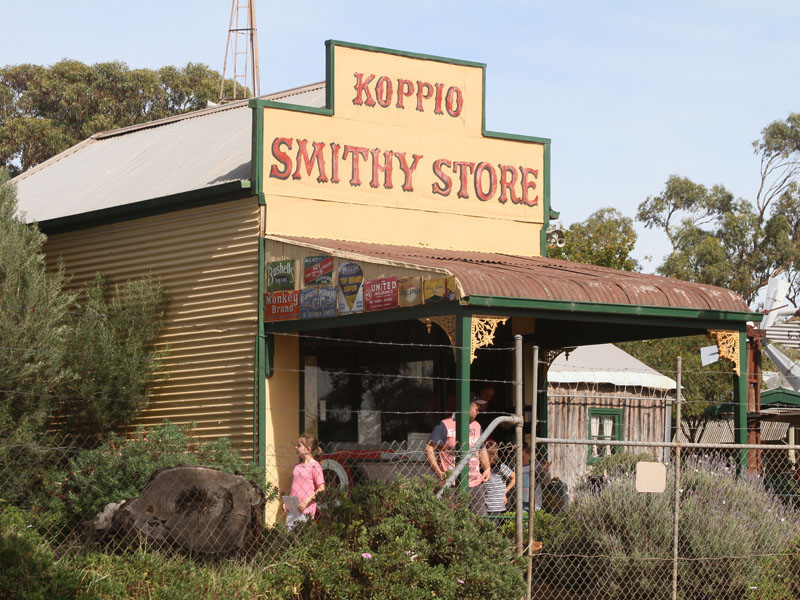 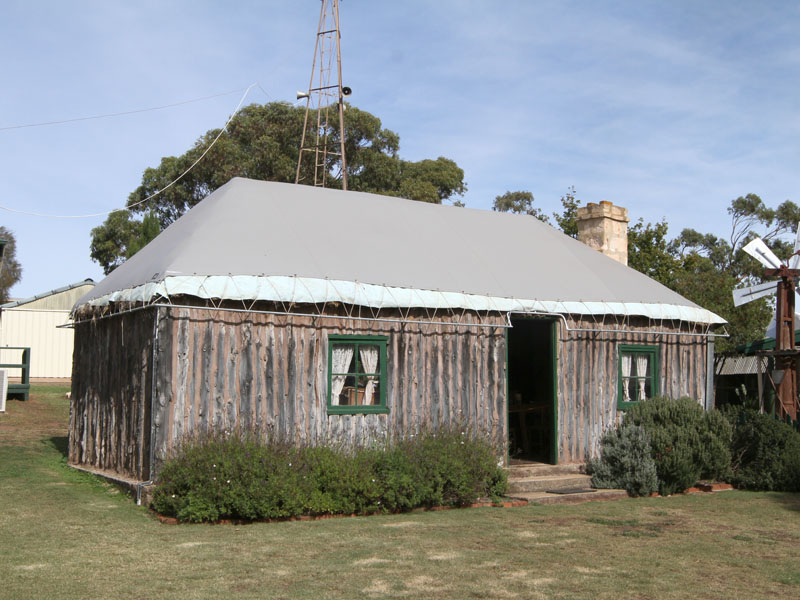 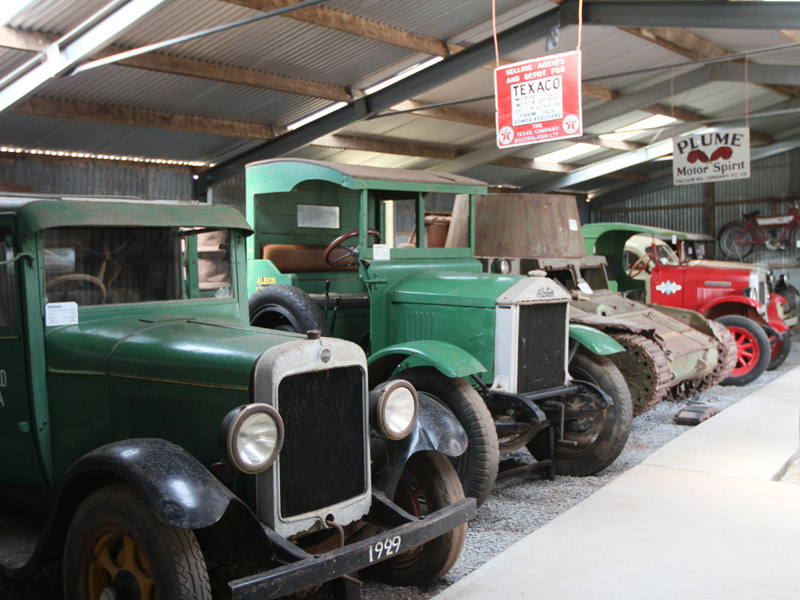