Waratah is a rambling town which was once, reputedly, the home of the largest tin mine in the world. It lies at the edge of Tasmania's west coast wilderness. The visitor will initially feel as though they are not really in a town at all. It is part of the town's unique charm that it reveals itself slowly. First there is the Philosopher's Hut and the Waratah Museum. Then, over the road, there is the Athenaeum Hall and the Kenworthy Stamper Mill. Then Lake Waratah with its unique iron bridge. The Waratah Waterfall. The exhibition of machinery used at the Mount Bischoff North Valley alluvial workings. The Bischoff Hotel and the Dudley Kenworth Waterwheel which made Waratah the first industrial site in Australia to be lit by hydro-electricity. Slowly the history of the town comes alive ... and the result is fascinating.

Waratah is located 205 km due west from Launceston and 377 km north west of Hobart via Queenstown and Zeehan.

Waratah was probably named by Van Diemen's Land Company officials after the Waratah River, a tributary of the Arthur River, which, in turn, was named after the wildflower which was found growing in the area.

The Waratah Museum, which operates as the town's Visitor Information Centre, has an excellent two page A4 guide to the town titled Self Drive Tour - Waratah. It lists a total of 33 places around town and provides photographs so all places are easily identifiable. The most important places are:

4. St James Church
The simple, timber St James Church in Smith Street was built in 1880 and by 1889 was the first church in Tasmania to be lit by electricity. The mine manager at Mt Bischoff, H.W.F. (Ferd) Kayser organised for electricity to be connected to the church.

7. Philosopher Smith's Hut
Located next to the Waratah Museum this simple, rectangular building was opened during the 1988 Bicentennial year. It "commemorates the discovery of tin at Mt Bischoff by James 'Philosopher' Smith in December, 1871 and the founding of Waratah." The interior is laid out to give an idea of the equipment a prospector would have possessed in the 1870s when he was searching for minerals. The hut is a replica of a typical miner's hut from the 1880s and 1890s.

8. Waratah Museum
Located in Smith Street and formerly the town's timber Court House, the Waratah Museum is a natural starting point for visitors wanting to explore the town. Its displays offer a detailed history of the district with photographs and artefacts and it can provide a copy of a self drive tour of the town. There is more detailed information at http://tasmanianhistorygroups.edublogs.org/waratah-museum-society.

9. Waratah Athenaeum Hall and Tarkine Visitor Interpretation Centre
The attractive timber building that is the Waratah Athenaeum Hall was completed in 1887 when the town was enjoying the economic prosperity provided by the tin mine. Today the building is home to the  Tarkine Visitor Interpretation Centre which provides information about the Tarkine forest - one of the largest cool temperate rainforests in the world. It also has information on how to access walking trails and lookouts in the wilderness.  To learn more about the remarkable Tarkine Rainforest check out http://www.discoverthetarkine.com.au/ which has huge amounts of information about this remarkable 477,000 ha wilderness.

9a. Kenworthy Stamper Mill
Brought into Waratah from the slopes of Mount Bischoff, this remarkable piece of equipment is housed in a building beside the Athenaeum and, with just a flick of a button, will roar into action giving the visitor an idea of what it was like as a piece of working machinery. It was used by a local, Dudley Kenworthy who continued prospecting near Mount Bischoff mine after it closed in the 1940s.

13. Waratah Waterfall
It is very unusual to see a waterfall in the middle of a town but the Waratah Falls lie at the heart of the town's mining economy. In the early years of the tin mining water races and tunnels fed water to the falls. The water was then diverted to a nearby power station to produce hydro-electric power. Today the falls are an attractive part of the townscape.

16. Machinery from Mt Bischoff  North Valley Alluvial Workings
If you want to understand some of the processes involved in processing and mining tin these remnants are informative. The brochure explains: "The two huge cylinders are known as trommels used for separating course gravels from the fine. The cast iron base plate and the other casings and impeller are from the 10" gravel pump used to supply material to the trommels. The other shafting and rope pulleys are from the self-acting haulage used on the mine site and also from the overhead aerial ropeway used to transport the ore buckets."

19. Bischoff Hotel
Now nearly a century old, the Bischoff Hotel stands on the hill overlooking the Waratah Falls. It elegance reminds the visitor that Waratah was once a town with a population of 5,000.

23. Mount Bischoff Mine
Only a kilometre out of town, beyond Bischoff Hotel, is a vantagepoint where visitors can inspect the scarred slopes of the open cut at Mount Bischoff. There is informative signage at the car park.

28. Lake Waratah
Waratah is built around the small and attractive Lake Waratah which has picnic and barbecue facilities, an interesting remnant iron bridge, and is now home to both ducks and trout.

Philosopher’s Falls
Located 10 km from Waratah on the back road to Cradle Mountain, are the Philosopher’s Falls. There are detailed instructions on how to reach the falls at http://www.touringtasmania.info/philosopher_falls.htm. It explains: "For the first 20 minutes of the walk the track gently descends to a new footbridge over the Arthur River ... A new track has been constructed on the western side of the river. The track follows an old water race which was built to supply water to the nearby Magnet Mine which closed in 1940. After another 20 minutes walk on a flat track a metal stairway down to the falls is reached. Just over 200 steps descend to a viewing platform providing the view of the falls shown on the right." As the website explains it has recently been made accessible by a $1 million upgrade to the track.

Magnet Road Track
Located 2 km from Waratah, this is a 5 hour return walk which follows the old Magnet Tramline, crosses an old tram bridge, passes what used to be the township of Magnet and skirts around the old Magnet Silver Mine. There is more detailed information on the self drive brochure.

* Prior to the arrival of Europeans the area around Waratah had been the home of the Peerapper Aboriginal language group for tens of thousands of years.

* The town came into existence in 1871 when James 'Philosopher' Smith found the Mt Bischoff tin deposit. Waratah is recognised as the oldest mining town in Tasmania.

* The first mining leases on Mount Bischoff were taken out in 1872.

* In 1877 tin from the mine was being carried to the Port of Burnie on a horse drawn wooden tramway. The journey took 13 hours.

* In 1879 the town acquired a police station and court house.

* By the 1880s the Mt Bischoff mine was thought to be the richest tin mine in the world.

* In 1883 Mount Bischoff Mine became the first Australian industrial plant to be lit by hydro-electricity.

* In 1884 the Van Diemen's Land Company built a railway from Emu Bay to Waratah. The journey took 3 1/2 hours.

* In 1886 the town had electric street lights. It was the first town in Australia to have this lighting.

* In 1908 the Court House became the local Council Chambers and Court House.

* By 1914 underground mining at Mount Bischoff had stopped.

* In the 1920s the town held an infamous Shotgun Carnival which was actually the Muddy Creek Picnic and Sports Day. It was dubbed the Shotgun Carnival because it was reputedly the day when shotgun weddings took place.

* By 1924 the town had a reputation for wildness. A letter to the Advocate, in 1924: “Sir – Waratah is certainly gaining some notoriety as a town of larrikinism. The half-drunk and fully-drunk mob wander around the town, pulling down fences, and otherwise annoying law-abiding townsfolk with their variegated language. Then the incendiary lunatic prowls around with his matchbox, burning down unoccupied cottages with impunity, followed by the low-down sneak thief, whose highest ambition in this world is to get away with other people’s fowls … yours, etc LAW AND ORDER.”

* Mount Bischoff closed in 1935 having produced 81,000 tonnes of tin and provided a dividend which was equal to £200 for every £1 initially invested. At its peak the town had a population of over 5,000.

* The road through the area was not completed until 1963.

* In 1981 the Que River Lead and Zinc Mine, with an investment of over $20 million, opened. It was estimated that the mine would have a life of 20 years.

* In 1983 the Waratah Museum was opened. It still offers a detailed history of the district.

Both the Roadhouse at the entrance to the town and the Waratah Museum have the two page brochure which is an ideal guide to the town. The nearest major Visitor Centre is the Wonders of Wynyard Visitor Information Centre, 8 Exhibition Link, Wynyard, tel: (03) 6443 8330.

There is a useful local website at http://www.visitwaratahwynyard.com.au which has information about the area. 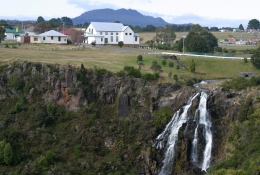 The Waratah Waterfall with the town in the background. 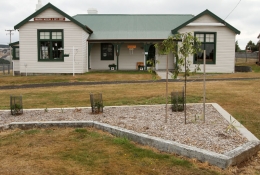 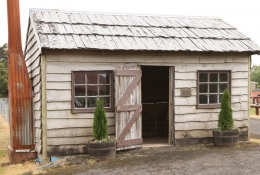 The Philosopher's Hut - a Bicentennial Project - outside the Waratah Museum. 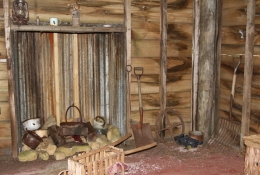 Pieces of tin mining equipment in the Philosopher's Hut 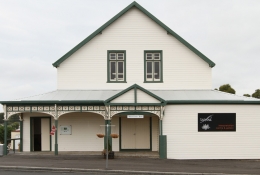 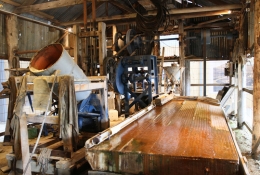 The Kenworthy Stamper Mill in the Tarkine Interpretation Centre 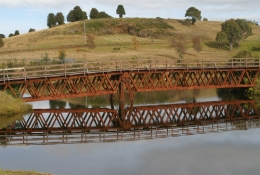 The bridge across Lake Waratah. 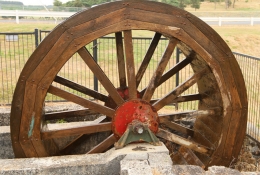 The Dudley Kenworth Wheel - a monument to Waratah being the first place in Australia lit by hydroelectricity. 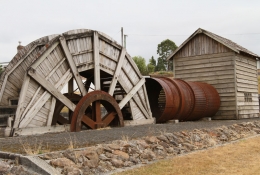 The waterwheel and pipes recall the town's days of tin mining. 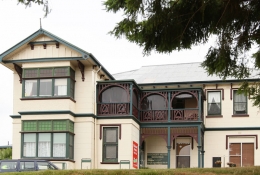