Warialda is an important service centre which lies on Warialda Creek, a tributary creek of the Gwydir River. Its importance is partly explained by its location at the intersection of the Fossickers Way and the Gwydir Highway. It is part of the North West Slopes fossicking area and is surrounded by a number of small, but interesting, national parks.

Warialda is located at the junction of the Fossickers Way and the Gwydir Highway, 597 km north of Sydney and 320 m above sea-level on a tributary creek of the Gwydir River.

It is accepted that the town's name probably meant "place of wild honey" in the language of the Weraerai Aborigines, a subgroup of the Kamilario people.

Heritage Buildings
The Visitor Information Centre has a sheet outlining the town's heritage buildings. It can be downloaded at http://www.warialdansw.com.au/historical-buildings. The main attractions include:

Warialda Convent
St Patrick's Roman Catholic church and the gracious timber convent were built in 1904 after the arrival of three sisters to establish the Convent School. It was home to the sisters and a small number of students who came from remote areas and boarded in the building. Major renovations were undertaken between 1991-1994 and the convent was repainted in 2004.

Warialda Court House
Located on the corner of Hope and Stephen Streets, the red-brick courthouse dates from 1883 and was built by S. Senior at a cost of £2,650. Look carefully and you will notice fine attention to detail on the veranda pillars and the bricks around the three front windows.

Carinda House
Carinda House is located on Stephen Street and was built as a private home around 1880. It is now an arts and crafts centre. The Warialda website notes: "Carinda was constructed of pit-sawn timber slabs on ground level. Horse stables and paddocks were adjacent. The top storey was added about 1900. Carinda features original timber and early bush carpentry, sturdy tree stumps support the upper storey which is accessed by a narrow internal staircase. In the 1920’s Nurse Marshall conducted a maternity hospital in Carinda and then later Mr and Mrs Stehr ran a boarding house. In 1943 Mr Les Rolfe occupied Carinda and operated a stock and station agency. His widow later established an insurance agency on the premises. In 1977 a committee of Warialda residents (with public support) purchased the property for use as a Community Cultural Centre. Carinda is now managed and promoted by local volunteers."

Wells Gem & Mineral Collection
Located in the visitor information centre the Well's Gem and Mineral Collection was assembled by the Wells family and was donated to the local community. In an area where fossicking is popular this collection includes ribbon stone, agate, chert, jasper, quartz and zircon. There are also ancient woods which have become opalised, petrified or ironised.

Koorilgur Nature Reserve Walk
The Koorilgur Nature Reserve Walk is 3.6 km long and extends from Apex Park eastwards to Rotary Park, passing through pleasant bushland where wildflowers bloom in spring. The complete loop is 6.9 km. The 3.6 km walk takes about ninety minutes, although there are three exits if you want a shorter walk. The brochure is available at the Visitor Centre or can be downloaded at http://www.warialdansw.com.au/koorilgur-nature-reserve/#.

Pioneer Cemetery Park
Located at the southern end of Stephen Street, the Pioneer Cemetery Park features graves dating back to the 1850s situated in a pleasant bushland setting. There is a memorial wall with the names of those buried prior to 1900. Although some graves had been badly eroded the authorities were able to identify 289 names of locals who were buried in the last 50 years of the 19th century.

Cranky Rock Nature Reserve
Located 8 km east of the town is Cranky Rock Nature Reserve, a jumble of boulders beside Reedy Creek which have settled into interesting and unusual positions. Cranky Rock is a large rock with a series of boulders perched on the top. The origins of the name are strange. It is claimed that a ‘cranky’ Chinese man murdered a Warialda woman – he was chased by the Police and evaded capture by leaping to his death from the high rock. The rock from which he jumped became known as "Cranky". From the Car Park, where there is a picnic-barbecue-toilet area, there is a walking trail which leads over a suspension bridge to a wildlife sanctuary where there are emus, kangaroos and other native animals, and on to a viewing platform on top of the boulders. Fossicking can produce agate, jasper, opalised and petrified wood, and quartz. Bird watching is particularly good and there are special brochures available at the Visitor Centre. Check out http://www.warialdansw.com.au/cranky-rock-nature-reserve for more detailed information about the reserve.

Fossicking
The Visitor Information Centre can advise on the best places in the district for fossickers looking for agate, jasper, opalised and petrified wood, and quartz The Tiger's gap area, which is located 5 km east via the Gwydir Highway, is known for its opalised wood and there are gravel quarries in the district where agate, jasper, chalcedony and petrified wood can be found.

Kerry Cannon's Ceramic Break Sculpture Park
Located 15 km from Warialda on the Bingera Road, the Ceramic Break Sculpture Park, as the website explains: "is the brainchild of bronze sculptor, Kerry Cannon. The park features three galleries; the largest gallery boasts a mezzanine with an art library. The galleries exhibit both paintings and sculptures by Kerry and many local artists. There's also a sculpture walk and a bush walk which leads to 'Ceramic Break'. Ceramic Break is an uninspiring rock mound where a participatory artwork is in progress. People are encouraged to bring a ceramic pot to the mound and break it. Ceramic Break Sculpture Park opened August 16, 2003.  It is a relaxing place to appreciate art and enjoy the scenery. It is open Thursday to Sunday from 10.00 am - 5.00 pm. Check out http://www.cbreaksculpturepark.com.au or tel: (020 6729 4147.

Gravesend Museum
Located 26 km west of Warialda on the Gwydir Highway is the village of Gravesend which began as a railway fettlers' camp. In 2004 the Gravesend and District Historical Society was formed. It acquired the old Church of England church which preserves many historic pieces from the surrounding district. Most notably it includes the 100 year old marble font from the church. The museum is open only by appointment. Tel: Fay Cains on (02) 6729 0045.

Bird Routes of the Warialda District
A relatively recent initiative, the bird routes project has established Warialda as a premier location for bird watching. Keen bird watchers now travel to Warialda where there are 9 separate bird routes around the town. Popular bird watching sites include the Cranky Rock Nature Reserve, Koorilgur Nature Walk, Adams Scrub Road, Gragin Peak, Mosquito Creek to Pallamallawa, Croppa Creek, a walk along Warialda Creek and the Dthinna Dthinnawan Nature Reserve. A brochure available at the Visitor Information Centre provides a map of the bird watching routes or check out http://www.warialdansw.com.au/wp-content/uploads/2014/06/Warialda-bird-brochure.pdf for a downloadable brochure on the routes in the area. Among the birds you can expect to see in the area are the Freckled Duck, Red-winged Parrot, Pale-headed Rosella,Turquoise Parrot, Grey-crowned Babbler, Inland Thornbill, Speckled Warbler, White-winged Fairy-wren, Little Woodswallow, Brown Treecreeper, Black-chinned Honeyeater & Diamond Firetail.

* Prior to European settlement the district was occupied by the Weraerai group who were members of the Kamilaroi Aboriginal language group.

* There is evidence that an escaped convict was living in the area prior to 1827. His hut was sighted by Allan Cunningham when he passed through the district.

* On 23 May, 1827 the explorer and botanist Allan Cunningham and his six colleagues, 11 horses and some dogs, camped on the banks of Reedy Creek near Warialda.

* The first white settlement alongside Reedy Creek dates from 1837.

* A police outstation was established here around 1840.

* A Court of Petty Sessions was established in the town in 1846.

* During the 1850s Warialda became the administrative centre of the north-west with a mining warden, magistrate and lands commissioner based in the village.

* The bushranger Captain Thunderbolt (alias Fred Ward) was active in the area in the mid-1860s, holding up the Warialda mail in 1865.

* The town was also the birthplace of Elizabeth Kenny (1886-1952) who dedicated her life to helping children afflicted with infantile paralysis (polio). She was christened in the font in the town's Anglican Church of Saint Simon and St Jude.

There is a useful local website. Check out http://www.warialdansw.com.au for information about accommodation and eating in the town. 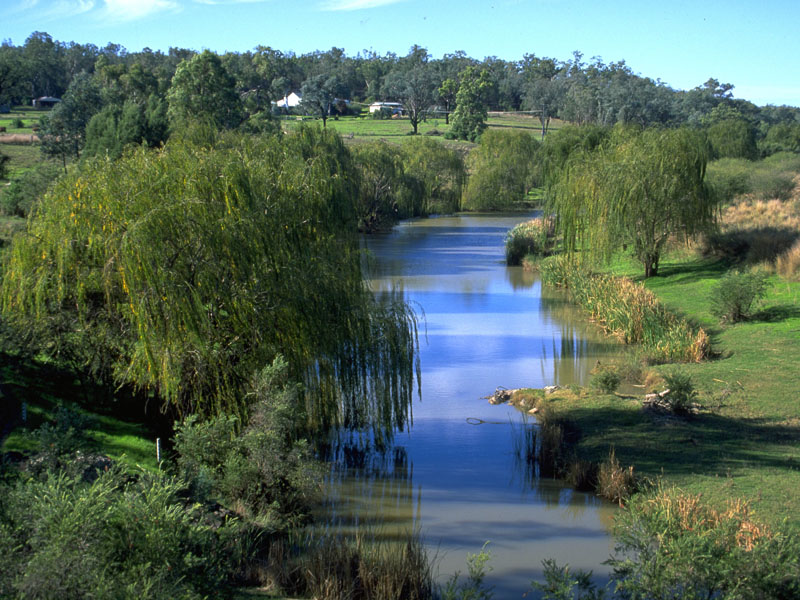 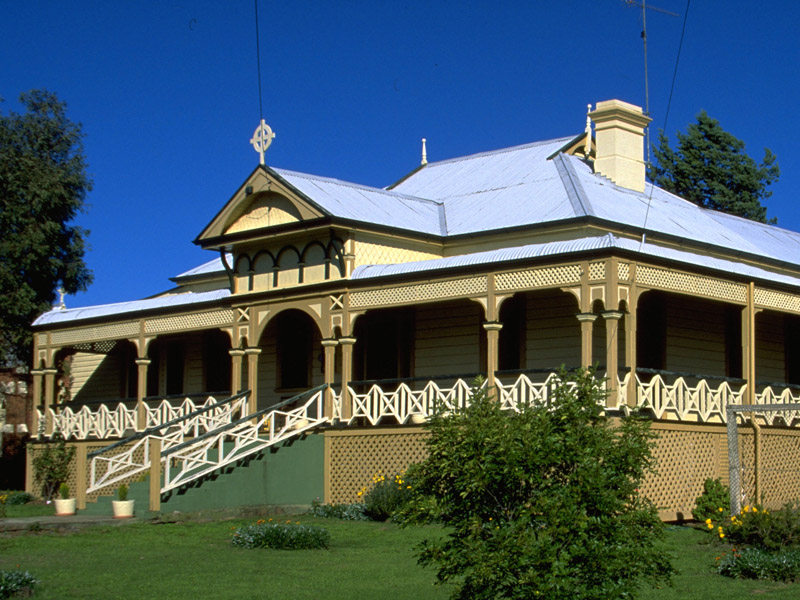 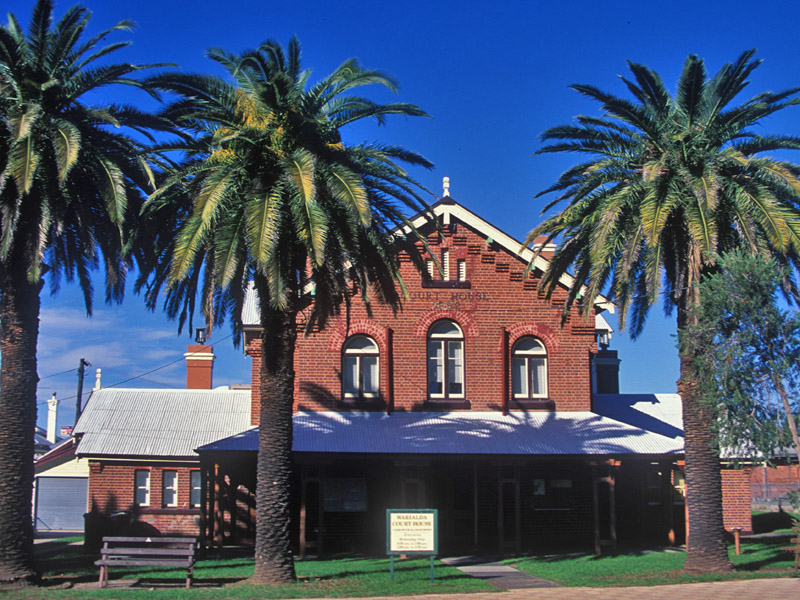