Wauchope is a tiny settlement on the Stuart Highway which has become a popular stopping place and watering hole for those making the long journey from Alice Springs to Darwin on the Stuart Highway. The district's central attraction is the Devils Marbles Conservation Reserve, a sacred site to the local Aborigines and a superb geological formation which attracts tens of thousands of tourists each year.

Wauchope lies to the west of the Murchison and Davenport Ranges and is located 1,122 km south of Darwin on the Stuart Highway, 134 km south of Tennant Creek, 9 km south of the Devils Marbles and 375 km north from Alice Springs.

The Devils Marbles are known to the local Warumungu, Kaytetye, Alyawarra and Warlpiri people as Karlu Karlu which is translated as 'round boulders'.

The Parks and Wildlife Fact Sheet explains that "Geologically, the marbles were formed from an upsurge of molten rock that cooled and became solid beneath a layer of sandstone. The solidifying granite caused vertical and horizontal fractures creating rectangular blocks. Over time water infiltrated the cracks breaking down the sandstone, and then the granite. As a result, rounded granite boulders perched on top of each other have been revealed." Erosion, caused by extremes of temperature, is still actively changing the features.

There is considerable debate as to the spiritual significance of the "marbles" to the local indigenous communities. For a long time it was believed that they were seen as eggs laid by the Rainbow Serpent in the Dreamtime but more recently it has been argued that there are a number of stories associated with the rocks and most of them cannot be told to uninitiated people. There is a story about a Devil Man who left hair behind him and this hair turned into the boulders.

There is an easy 15-minute walk from the car park which passes many of the 'marbles'. It is accompanied by useful signage which explains the geology of the rocks. One sign explains: 'These boulders were originally part of a solid mass of coarse grained granite which formed deep within the earth's surface about 1640 million years ago. Erosion has since stripped away the overlying material and weathering processes have shaped the forms you see here today. As the molten magma cooled and hardened to form granite the mass shrank and cracked and these cracks known as joints effectively split the granite body into a series of tight fitting blocks.'

Apart from the 'marbles', the Conservation Reserve is worth visiting for its fauna and flora. The observant 'twitcher' can see the bottle-shaped mud nests of the Fairy Martin, Zebra and Painted finches. There are also Pygmy Spiny-tailed goannas, large Sand goannas and small Black-headed goannas and the ghost gums and rock figs which grow in the crevices are particularly beautiful.

The best time to see the boulders is at sunrise or sunset when the sun glows and lights up the red iron which covers the rocks.

* The area around Wauchope has been the traditional home of the Warumungu, Kaytetye, Alyawarra and Warlpiri people for tens of thousands of years.

* Wauchope is a relatively modern settlement established in 1917 to service the newly established wolfram mining operations and to provide a pub for the workers at the various Barkly Tablelands cattle stations in the area.

* Mining continued from 1917 to 1941 and was determined by the price of tungsten and during this time it was estimated that a little over 1000 tonnes of concentrate were extracted from 10,100 tonnes of quartz mined.

* The Wauchope Hotel opened in 1930 to serve the needs of the miners and cattle workers.

* In April, 1942 the Commonwealth government took over the wolfram operations but further exploration revealed that the quartz provided such low returns and so by the end of 1943 mining was abandoned although it would restart intermittently according to the prices for the mineral.

* In 1951 it was reported that there were about 30 miners working the field.

* Today there is little evidence of the wolfram mining which took place in the area. There are some photos of the old operations on the walls of the Wauchope Hotel.

There is no formal visitor information centre but the Wauchope Hotel, Stuart Highway, Wauchope, tel: (08) 8964 1963 and http://www.wauchopehotel.com.au is happy to provide local information.

There are meals available throughout the day at the Wauchope Hotel, Stuart Highway, Wauchope, tel: (08) 8964 1963.

There is an excellent brochure available which can be downloaded at http://www.parksandwildlife.nt.gov.au/__data/assets/pdf_file/0020/10568/DevilsMarbles.pdf 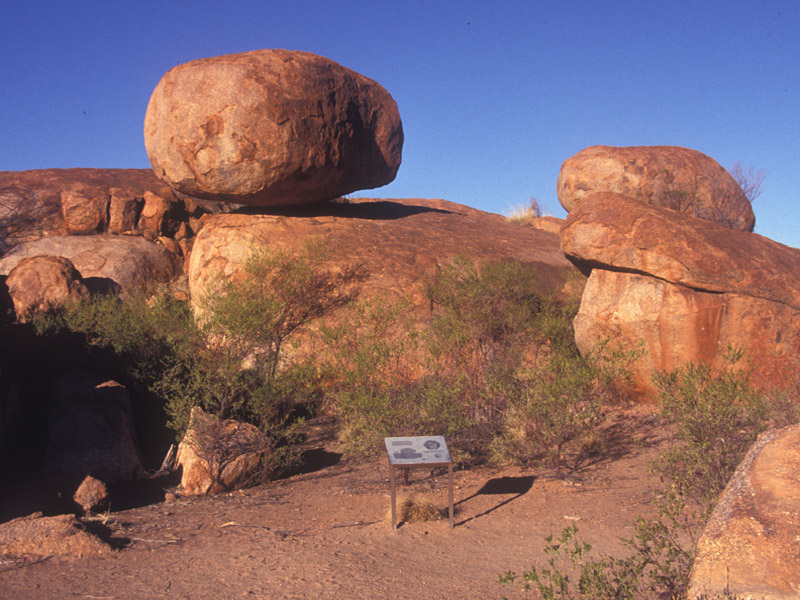