Blue Mountains town noted for its views and its waterfalls.

Wentworth Falls is a genuinely charming small village which has become a major tourist destination because of its excellent bushwalks and its large number of dramatic views across the Jamieson Valley. Its appeal lies primarily in its dramatic vistas and the simple fact that it is not nearly as crowded and overtly touristy as Katoomba or Leura which are the next two towns as the visitor rises up the mountains.

Wentworth Falls is 867 metres above sea level and 95 km from Sydney via the Great Western Highway.

When William Cox was building the road across the Blue Mountains in 1815 he constructed a supply depot at the present site of Wentworth Falls. He called it "The Weatherboard" and amusingly the settlement continued to use that name until 1879 when the name was officially changed to Wentworth Falls. It was named after William Charles Wentworth who, along with Blaxland and Lawson, was the first European to cross the mountains in 1813.

Yester Grange
Yester Grange is one of the most significant buildings in Wentworth Falls. The land on which Yester Grange stands originally comprised 58 acres (23.47 ha) which was granted to Benjamin Backhouse in 1878. A decade later it was transferred to the 28-year-old John Charles Smith, a retired sea captain, who built a timber house which he named after Yester House in Gifford, near Edinburgh. The house was designed by the son of James Barnet, the NSW colonial architect responsible for large numbers of public building in New South Wales including the GPO in Martin Place, the facade of the Customs House and the Australian Museum.

In 1902 Yester Grange was sold to Sir John See (Premier of New South Wales from 1901-04) who used it as his summer retreat from the heat of Sydney. In 1889 the See's added the two rear wings and the kauri-lined ballroom. The house remained in the family until 1938. It was vacant from 1938 until 1944 when it was purchased by James and Margery Anderson. It later became a Victoriana Museum (1975-1999) and from 1999 to the present it has slowly been returned to the elegance it enjoyed when Sir John See entertained in its gracious gardens and rooms. Yester Grange is located on Yester Road which lies to the east of the railway station. Sadly it is not open to the public. You can access it either by getting married there or by taking a holiday letting at one of the two cottages in the grounds. Check out http://yestergrange.com.au/ for more details.

Weatherboard
Nothing is left of the old store known as "Weatherboard" which gave its name to the town before Wentworth Falls was adopted. However in Coronation Park there is an historical marker recording the store's location and an oak tree which was planted to commemorate the very brief visit in 1836 by Charles Darwin to the Weatherboard Inn.

Around the Cliffs
There are a total of 48 walks around Wentworth Falls listed on the Wild Walks website. They are all within 5 km of Wentworth Falls. Without listing all of them there is a simple way to access some of the best:

Head down Falls Road which leads to Wentworth Falls Reserve and near the end of Falls Road is Fletcher Street heads west to Valley of the Waters Reserve. Both these reserves are good starting points for the walks in the area.

Walks from Wentworth Falls Reserve
* From Wentworth Falls Reserve there is a 0.7 km return walk (45 minutes) to Princes Rock which offers excellent views of Wentworth Falls, Mount Solitary, Kings Tableland and the Jamison Valley. There are rock overhangs, waterfalls, facilities and birdlife, all in a rainforest setting. A walk of medium difficulty it includes steps. Another short walk is the scenic Weeping Rock Circuit Walk (1.4 km, medium difficulty with steps) which goes out to Fletchers Lookout. The reserve also has walks to Rocket Point Lookout.

* Either reserve is a suitable starting point for the Under and Over Cliff Walks (9.4 km circuit of medium difficulty), the National Pass Circuit Walk (3.6 km one way) and the 5-km Wentworth Pass Circuit Walk. These are difficult walks involving many steps and fenced cliff areas.

The booklet, Walking Tracks in the Wentworth Falls Area, prepared by the National Parks & Wildlife Service, provides an excellent contour map and details of these walks. Check out http://www.wildwalks.com/bushwalking/general/list-of-walks.html?groupid=52 for details of all the walks in the area.

Kings Tableland
Kings Tableland is the impressive rock plateau to the east of Jamieson and Wentworth Falls Lookouts. Tableland Roa, which lies to the east of the town, leads to  Sunset Rock Lookout and Kings Tableland Observatory. The plateau was named by Governor Macquarie whose desire to bless it with a royal name is a reflection of the dramatic views across the Jamison Valley that can be had from the lookouts.

There are a number of Aboriginal sites, including a rock shelter and rock surfaces where tool-sharpening grooves can be observed, which are clearly signposted. Over 3,000 artefacts of flaked stone have been discovered in the area. Carbon dating in a nearby cave has shown that Aborigines lived in the area at least 22,000 years ago. Check out http://www.weekendnotes.com/aboriginal-gronding-grooves-at-kings-tableland-wentworth-falls/

McMahon’s Lookout
McMahon’s Lookout is 23 km down Tableland Road, a dirt track only suitable for 4WD vehicles. At the end lies an 800 metre walk down a path rarely cleared where ferns and trees grow wild. The visitor moves from the typical scrubby Kings Tableland down through a remnant of rainforest (all ferns, moss, lichens and wetness) and comes out at a lookout (well fenced and superb) which provides an excellent view over Lake Burragorang, the artificial lake created when the Warragamba Dam collected the waters of the Cox’s, Kowmung, Nattai, Wingecarribee and Wollondilly Rivers. This is a rare look at a different side of the Blue Mountains. Far to the south are the region's sandstone cliffs but in the foreground, smudged with the distinctive blueness of the mountains, are low-lying, rolling hills covered with eucalypts. And below is the drowned river valley with the occasional hilltop, still covered with trees, rising from the waters.

* On 23 May, 1813 Blaxland, Wentworth and Lawson, while exploring a route across the Blue Mountains, camped a little north of the present site of the railway station "on the side of a Swamp with a beautiful Stream of Water running through the middle of it". This was probably Jamieson Creek.

* In 1814 William Cox while he was building a road across the mountains built a weatherboard hut which he used as a store and called The Weatherboard. It was located in what is now Coronation Park and it gave its name to the subsequent settlement.

* In 1815, while on his way to Bathurst, Governor Macquarie camped at The Weatherboard and named most of the prominent features in the area  including Kings Tableland, the Jamison Valley (after his friend who lived on the banks of the Nepean River), Pitt's Amphitheatre (after the British prime minister) and Prince Regent's Glen (after the Prince of Wales who became George IV in 1820). He also gave Wentworth Falls the name 'Campbell's Cataract' after his secretary but Weatherboard persisted.

* In 1833 William Boyles built the Weatherboard Inn on the site where Cox had built the depot. By this time the depot had burnt down.

* In 1835 the Quaker James Backhouse planned to stay at the Weatherboard Inn. He has left a memorable description of the place: 'After travelling eighteen miles, we arrived at the Weather-board hut where we had intended to lodge; but the only good room was occupied. One in which we had an excellent meal of beef and bread, with tea, was without glass in the windows, and could not have the door shut, for the smoking of the wood fire.' Not surprisingly, he moved on.

* On 17 January, 1836 Charles Darwin, while journeying through the mountains, spent time at the Weatherboard Inn. In The Voyage of the Beagle he wrote of Wentworth Falls: "'About a mile away there is a view exceedingly well worth visiting. Following down a little valley and its tiny rill of water, an immense gulf unexpectedly opens through the trees which border the pathway, at the depth of perhaps 1500 feet. Walking on a few yards, one stands on the brink of a vast precipice, and below one sees a grand bay or gulf, for I know not what other name to give it, thickly covered with forest. The point of view is situated as if at the head of a bay, the line of cliff diverging on each side, and showing headland behind headland, as on a bold sea coast. These cliffs are composed of horizontal strata of whitish sandstone; and are so absolutely vertical, that in many places a person standing on the edge and throwing down a stone, can see it strike the trees in the abyss below."

* In 1867 the railway arrived and the the siding was called Weatherboard. It was the end of the line for a year.

* A concrete dam was built across Jamieson Creek in 1878. It created Wentworth Falls Lake north of the town.

* In 1879 the town's name was officially changed to Wentworth Falls.

* By the 1880s the area was popular with holidaymakers from Sydney. It continued to be a popular destination until the 1930s. Today it has become a suburb of Greater Sydney with many locals commuting into the city for work.

Wild Walks is a superb overview, complete with maps, of all the walks in the area: http://www.wildwalks.com/bushwalking/general/list-of-walks.html?groupid=52 and http://www.bluemts.com.au/info/towns/wentworth-falls/ is a good overview of the area. 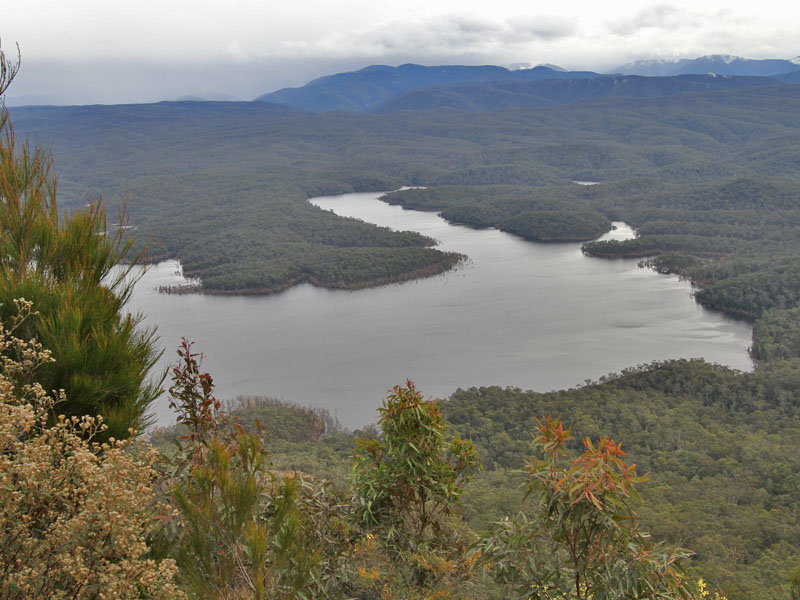 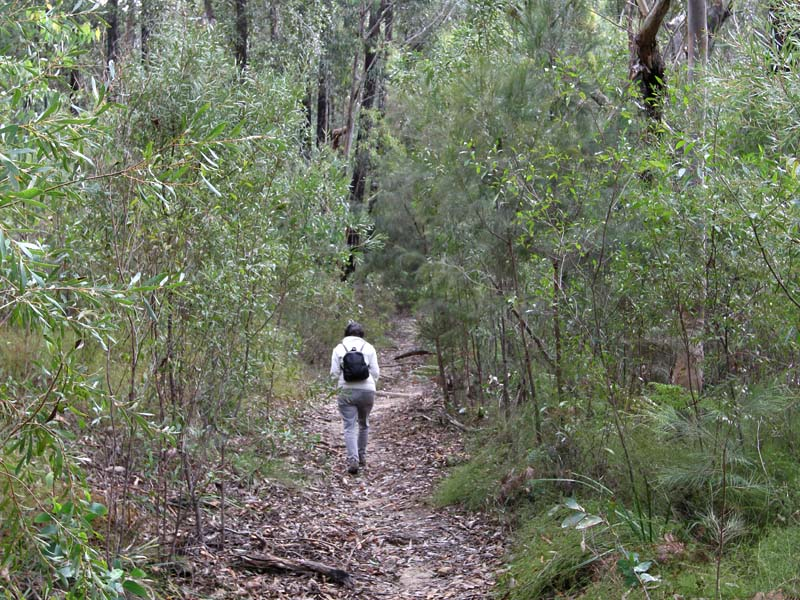 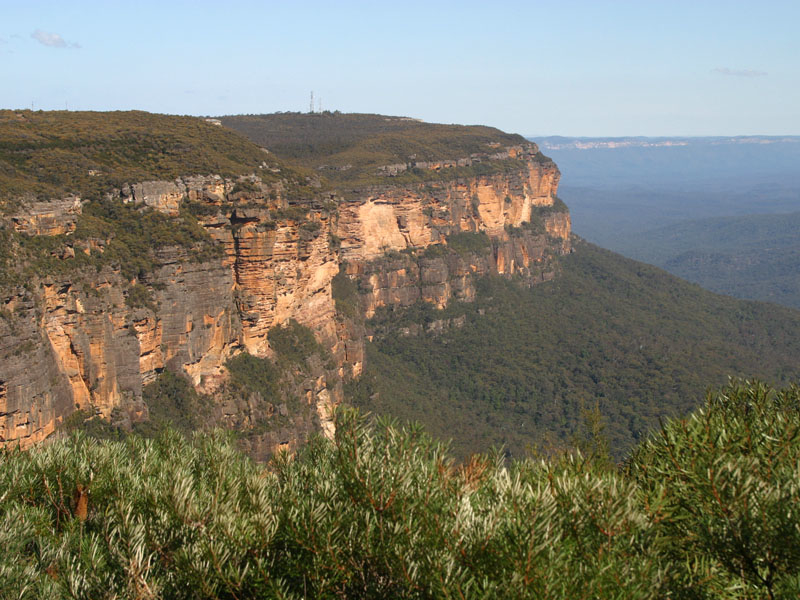 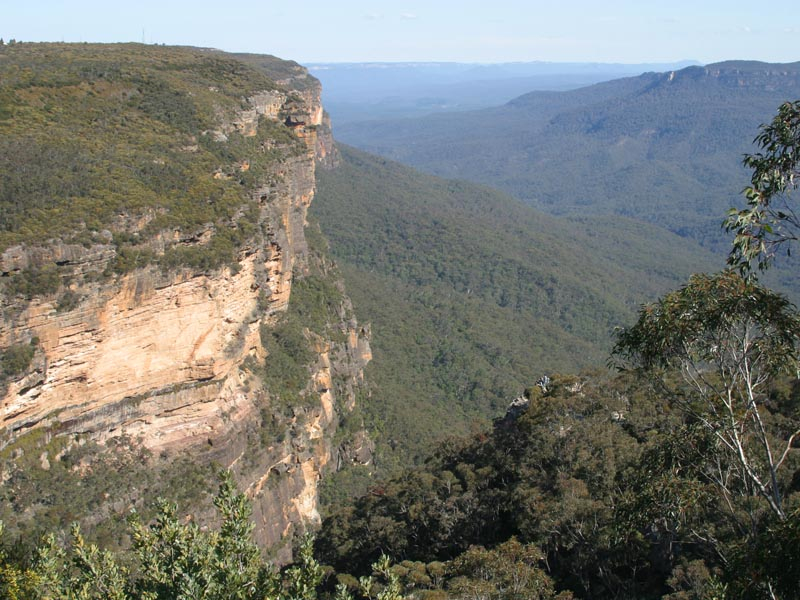 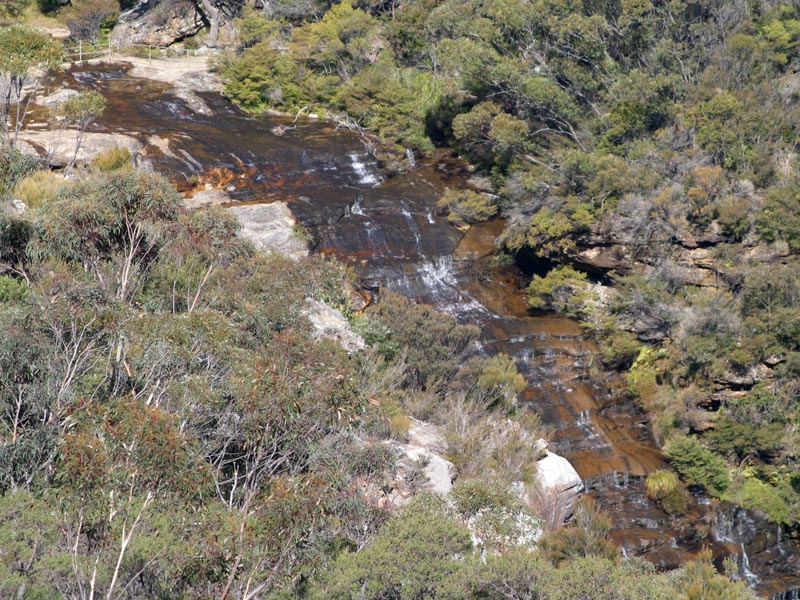