Wondai is a small rural service centre in the heart of the South Burnett region. Today it services the surrounding properties where wheat and cereal crops are grown and dairy and beef cattle are raised.

Wondai is located 246 km north-west of Brisbane via Caboolture and Kingaroy. It is 108 km west of Gympie.

Wondai is a Wakka Wakka word meaning "dingo". The town was originally called Bushnell, after local settler Joseph Bushnell, but it was changed to Wondai in 1903.

South Burnett Region Timber Industry Museum
Located at 80 Haly Street, and sharing the same building as the Visitor Information Centre, the museum was opened in November 2001 and showcases the history of the South Burnett's timber industry. The timber structure of the building is flanked by an impressive sculpture of a bullocky and two bullocks, an old water-well and post-and-rail fence. There is also a stainless steel silhouette of a timber cutter. Inside the museum there is a bullockies camp and a restored bullock wagon. There are wooden slabs and shingles, a range of South Burnett timbers, artefacts and photos telling the story of the early timber industry in the region. The museum's gift shop has locally produced woodcraft and in the Woodcrafters' Workshop local woodworkers demonstrate their skills. For more information check out http://www.southernqueenslandcountry.com.au/destinations/wondai/attractions/south-burnett-region-timber-industry-museum.

Wondai Heritage Museum
Located at 80 Mackenzie Street (open from 10.00 am - 3.00 pm Tuesday to Friday) which is a typical folk museum with such treasures as a "bugle captured by local resident Jim Houston and played by him at the 1945 Japanese surrender at Morati. The relocated 1910 Wondai Hospital operating theatre with historic implements ... a machinery shed with sulkies and ... a grand old octogenarian the "Dennis Fire Engine". There's a 1930's slab barn with authentic shingle roof which houses tools used by blacksmiths, cobblers, shearers and horsemen. And the 1920's Oddfellows Hall houses a display of intricate lodge regalia and theatrically-styled settings depicting a schoolroom, laundry, kitchen, bedroom, cinematic & printing room ... and there is a promenade that winds through the heart of all these exhibits and is bordered by historic agricultural machinery and a magnificent 100 year old ten-ton "Alchin" traction engine". For more information tel: (07) 4169 0987.

Tingoora
Located 7 km south-west of Wondai on the Bunya Highway is the little hamlet of Tingoora which has a popular, solitary hotel, the Tingoora Hotel, which dates from 1900.

Lake Boondooma
Lake Boondooma is 60 km north-west of Wondai and is noted as an ideal destination for anglers, campers, bird-watchers and water-sports enthusiasts. The dam was purpose-built in 1983 to provide a water supply for the Tarong Power Station. In recent times the South Burnett Regional Council has developed it as a major regional recreation area with excellent fishing and quality caravan and camping facilities. Check out http://www.lakeboondooma.com.au/ for details.

Boondooma Homestead
Located at 8262 Mundubbera-Durong Road some 75 km west of Wondai, the Boondooma Homestead was built on the Boondooma Run which was first settled by Europeans in 1846 by Robert Alexander and the Lawson brothers.
Today there are five buildings of historic interest on the site. Most of the buildings were constructed of wooden slabs – iron bark or cypress – and originally had shingle roofs. The station's store was built of local stone to protect the supplies.
Queensland Heritage notes of the complex "Boondooma comprises built elements that are now uncommon examples of construction methods and techniques. The principal historic buildings include an 1850s stone storehouse, which is both rare in its method of construction and an early example of the use of the metric standard in Queensland. The main house and the post office are also important surviving structures. The survival of interior finishes in the main timber house, including wallpapers and linoleums, contributes to its rarity."
Boondooma Homestead is one of the few examples of early pioneer architecture which can be visited by the public in the Burnett region. It includes vertical and horizontal ironbark timbers. A sawing pit located to the North West was used in the construction of the homestead. It was completed in 1855, the wallpaper was ordered, and Alex Lawson and his new bride moved in. The roof of corrugated iron was put over the original wooden shingles in 1870.
The Stone Store was built to store supplies for the station workers, and later to local settlers until 1922. Constructed of roughly coursed random stone, it was built by German stonemason Wilhelm Brill, between 1854 and 1858. It originally had a shingle roof which was replaced by corrugated iron in the 1870s. Believed to be one of Australia's earliest structures built to metric measurements, it is an important relic from early European settlement.
The Post Office is thought to have been constructed about 1850, with extensions added in the 1950s.
Brownie's Hut is believed to be one of the original shepherd's huts from the ridge behind the Store, as shown on the 1861 survey and also in a pre-1918 photo. It was dismantled and removed in 1918, to be rebuilt on ‘Glentullock’ but it was returned to its original site in 2002.
The Cool Shed is a shed designed for Queensland. It manages to become cooler, the hotter a day becomes. When the sun shines on the roof the more cool air is drawn inwards and upwards thus keeping the interior several degrees cooler than the outside temperature.
The Boondooma Homestead is open from 9.00 am - 4.00 pm daily. There are guided tours but the homestead can be inspected without a guide. It has a wide range of local items and an impressive photographic display. They are proud of the fact that most of the items in the museum were actually part of the original station - there are tools that were used to build the Stone Store, Aboriginal artefacts, household items, musical instruments and vehicles used on the farm. It is also possible to camp near the homestead. For more detailed information there is an excellent website: check out http://www.boondoomahomestead.org.au or tel: (07) 4168 0159. The complex is listed in the Queensland Heritage Register. For details check https://environment.ehp.qld.gov.au/heritage-register/detail/?id=600967.

* Prior to the arrival of Europeans the area was occupied by the Wakka Wakka Aboriginal people.

* Wondai was settled in the 1840s after the New South Wales government decided to open land around the Moreton Bay penal colony to free settlers.

* In 1844 Richard Jones became the first European in the area when he established a sheep station at Mondure.

* In 1846 the nearby Boondooma Run was settled.

* The Boondooma homestead was built in 1856.

* In 1885 the sheep station at Mondure changed to cattle under the ownership of Joseph Bushnell.

* By the 1890s there were a number of small settlements around Wondai - all servicing the properties in the area.

* In 1902 that the town was officially gazetted.

* The Wondai Times was first published in 1910.

* The town was decimated when a fire raced through the centre in 1912.

* Wondai celebrated its centenary in 2003.

There is a useful local website with information about accommodation and eating. Check out http://tourism.southburnett.com.au/townwondai.htm. 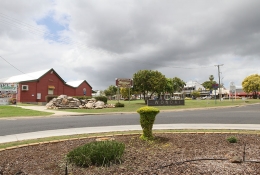 The Art Gallery and main street of Wondai 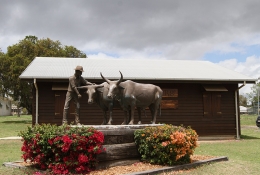 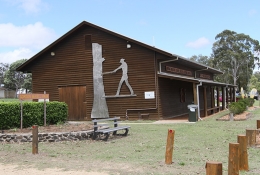 The Timber Industry Museum with the stainless steel timber cutter 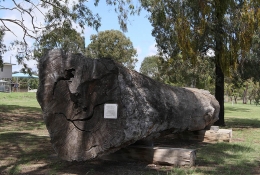 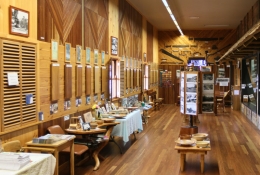 The main gallery at the Timber Industry Museum 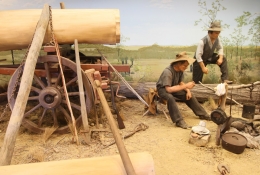 Part of the impressive timber tableau in the Museum 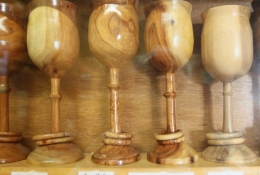 Goblets made from different timbers

Learn about the nature of Australian timber at the Museum 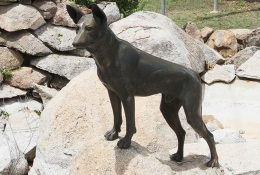 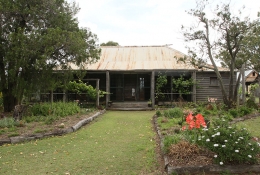