In 1970 the infamous (he was eventually gaoled) Perth entrepreneur, Alan Bond, purchased a sheep property inland from the tiny fishing village of Yanchep. He planned to develop a satellite city, which he named Yanchep Sun City, and offer housing for more than 200,000 people. Part of the plan was to develop the Sun City Marina at Two Rocks, 6 km north of Yanchep, which would be used as a launching pad for Bond's attempts to win the America's Cup - which he did in 1983. Sun City failed but the area, which now includes Yanchep National Park, has become a rapidly developing commuter belt for Perth. Today the primary appeal of the area is the remarkable Yanchep National Park - a haven for Grey Western Kangaroos, superb displays of wildflowers during the spring, and broad, well maintained parklands beside lakes which are ideal for picnics, parties and barbecues.

Yanchep, now considered an outer suburb, is located on the coast 56 km north of Perth.

The name ‘Yanchep’ was adapted from the Nyoongar word ‘Yandjip’, or ‘Yanget’, which is their word for the bulrush reed that is abundant around the wetlands of the area

Yanchep National Park
Yanchep National Park is an outstanding day trip from Perth. It comprises undulating country, parallel sand dunes, four undisturbed wetlands regions and over 600 caves. Not surprisingly most of the land is either karst (limestone cliffs and caves) or sandstone sediments. Apart from having some delightful modern pieces of sculpture located beside a lake, it has an excellent Wildflower Garden (next to the koala boardwalk) with an extensive and impressive display of some of the best of the coastal wildflowers. Yanchep National Park lies to the east of the town and covers 2,799 ha. It is an interesting combination of caves, walking trails, and lakes including Loch McNess and the Yanchep Lakes ... and, interestingly, a golf course and the Chawn Mia tea rooms. The vegetation in the area features stands of tuart, jarrah, marri, scrub and banksia. The wildlife includes possums, goannas, lizards, kangaroos and tortoises. The area is mostly wetlands and consequently the birdlife is rich. There are birdlife brochures at the McNess House Visitor Centre. For comprehensive information about the park check out http://parks.dpaw.wa.gov.au/yanchep. There is a useful, downloadable brochure (with a very detailed map) which can be accessed at http://www.inspirationoutdoors.com.au/wp-content/uploads//2013/08/20120004_yanchep_national_park_brochure3.pdf.

Gloucester Lodge Recreation Camp
Gloucester Lodge is located in the National Park. It was built in 1932 as accommodation (complete with a swimming pool) and hosted a visit by the Duke of Gloucester in October, 1934 - which is how the building got its name.He stayed for a night. Over the years it has been a training camp for the Australian Olympic and Swimming team (1936); the Radar and Communication Unit for the RAAF (1943-1946); a guest house (1946-1976); a Museum (1979) and today it is a Recreation Camp site. Check out details at http://www.gloucesterlodge.com.au or tel: (08) 9561 6352.

The Caves
Crystal Cave
There is a 45 minute guided tour of the Crystal Cave which departs daily at 10.30 am, 11.30 am, 1.00 pm, 2.00 pm and 3.00 pm. The cave has the usual array of stalactites, stalagmites, helictites and is known for its amphipods - shrimp-like crustaceans that live in the cave streams. Tours can be booked at McNess House Visitor Information Centre, tel: (08) 9303 7759.

The Cabaret Cave
The Cabaret Cave, which had major “modifications to its structure and was converted to an underground function centre in the 1930’s” according to a government report, is today promoted as "the cave has been beautifully modified to accommodate up to 120 guests sit-down style, or 200 guests cocktail style. And the cave’s natural air conditioning makes it the perfect location all year around." It is hired out for events. For more information check out: http://parks.dpaw.wa.gov.au/site/cabaret-cave.

Koala Boardwalk
Koalas are not native to Western Australian. However there has been a colony of koalas at Yanchep since 1938 and with the development of the National Park a 240 metre long boardwalk was built which allowed visitors to pass through the area where the animals live (and sleep).

Wangi Mia Meeting Place
At the Wangi Mia Meeting Place there is a 45 minute Aboriginal Experience which operates on Saturdays and Sundays. As the brochure explains: "Discover the culture of the Nyoongar people of Western Australia’s southwest: their seasonal movements, language and how knowledge is passed from generation to generation. See tools such as spears and boomerangs. Witness a spear-throwing demonstration. Discover how plants and animals in this environment bear great significance to the Nyoongar people. The "experience" can be booked at McNess House Visitor Information Centre, tel: (08) 9303 7759.

Walking in Yanchep National Park
There are a total of nine walks in Yanchep National Park ranging from short strolls to the 28 km Yaberoo Budjara Walk Trail. There is a useful brochure, complete with a map and descriptions of all the walks, which can be downloaded at http://www.bushlandperth.org.au/images/stories/Groups/ridges/wild_about_walking_yanchep_np.pdf. The walks include:

Ghost House Walk Trail (9.2 km, 4.5 hours, medium)
This trail departs from the Wetlands Walk Trail on the far side of Loch McNess. It is a flat bush track which includes spectacular displays of wildflowers in spring and excellent views of the lake. It ends at the Caberet Cave.

Yaberoo Budjara Walk Trail (28 km, one day, challenging)
A lengthy walk from Lakeview Car Park to Joondalup. This is a trail based on a traditional Nyoongar walk.

Dwerta Mia Walk (500 metres, 20 minutes return, easy)
This trail connects the Ghosthouse Walk to the Caves Trail. It starts at the Boomerang Gorge car park. There is clear signage explaining the caves and limestone features in the park.

Caves Walk Trail (4.5 km, two hours return, easy)
This walk includes both the Crystal Cave and the Cabarat Cave. It is possible to book tours along this walk.

Alan Bond and Yanchep Sun City
In 1970 Alan Bond, an immigrant from England who had become a high profile entrepreneur in Western Australia, purchased the sheep property which surrounded the coastal fishing village of Yanchep. Over the next decade Yanchep and Sun City became synonymous with Bond. The development of the area was a carefully thought out act of synchronicity which was connected to Bond's decision to build Sun City as a combined marina with a holiday village. Being isolated Sun City needed to have some major point of interest and needed to have some international publicity. Consequently the million dollar Sun City marina became the home for Bond's early attempts to win the America's Cup. It was the home to the challengers Southern Cross (which lost 4–0 to Courageous in 1974) and Australia. (which was beaten 4–1 by Freedom in 1980). Australia II won in 1983. With Bond's commitment to make Yanchep a centre of high flying sophistication came plans for a golf course, charter fishing facilities to take the rich fishing all year round, and a modern shopping complex. It is a comment on the scale of the failure that Bond sold the whole project to Tokyu Corporation in 1977 and that by 2006 the population of Yanchep had not reached 3,000 people.

The Abandoned Atlantis Marine Park
Located 10 km north of Yanchep at Two Rocks, the Atlantis Marine Park was constructed in 1981. The idea was to create a marine park attraction which would draw visitors from Perth. The most significant feature was a huge 10 metre high King Neptune holding his trident which has remained at the site. It overlooked the whole marine park and had panoramic views across the ocean and the township of Two Rocks. The sculpture was created by American sculptor, Mark Le Buse and in 2006 was heritage listed by the Western Australian Heritage Council.
Atlantis had the slogan “Atlantis marine park for the enrichment of mankind.” The park was closed in 1990. Since the closure many of the park’s sculptures where vandalised. Some have been restored and relocated to a nearby park. To learn more check out https://www.youtube.com/watch?v=EtiA4YuUVWI.

* Prior to the arrival of Europeans the area around Yanchep was occupied by the Nyoongar First Nation people. The traditional owners of the Yanchep National Park are the Whadjuk and Yued subgroups of the Nyoongar.

* In 1841 the explorer George Grey passed through the area and commented on the wetlands, the chain of lakes and the rich birdlife.

* Like most of the small coastal settlements north of Perth, Yanchep developed as a small fishing community. It specialised in crayfishing.

* In 1905 the government declared 5,640 acres (2282 ha) at Yanchep for the "protection and preservation of caves and flora and for a health and pleasure resort".

* In 1936 the Australian Olympic Swimming and Diving team trained at the Crystal Pool.

* Between 1943-1946 the Radar and Communication Unit was headquartered at Gloucester Lodge.

* The land around the coastal settlement was a sheep property until it was bought by Alan Bond in 1970.

* In the 1970s the entrepreneur, Alan Bond, planned to develop Yanchep, which he renamed Yanchep Sun City, into a modern and sophisticated tourist centre with a potential population of 200,000.

* The first houses for Yanchep Sun City were built in 1972.

* Sun City Marina became the home of the yacht Southern Cross which lost against Courageous in the 1974 America's Cup.

* By 1977 Bond was experiencing financial problems and the entire Sun City project was sold to the Tokyu Corporation.

* In 1980 the marina was the home base for Australia which failed to win the America's Cup that year.

There is no dedicated Yanchep website but WA Parks and Wildlife website - http://parks.dpaw.wa.gov.au/yanchep - has useful information about the main attraction in the region. 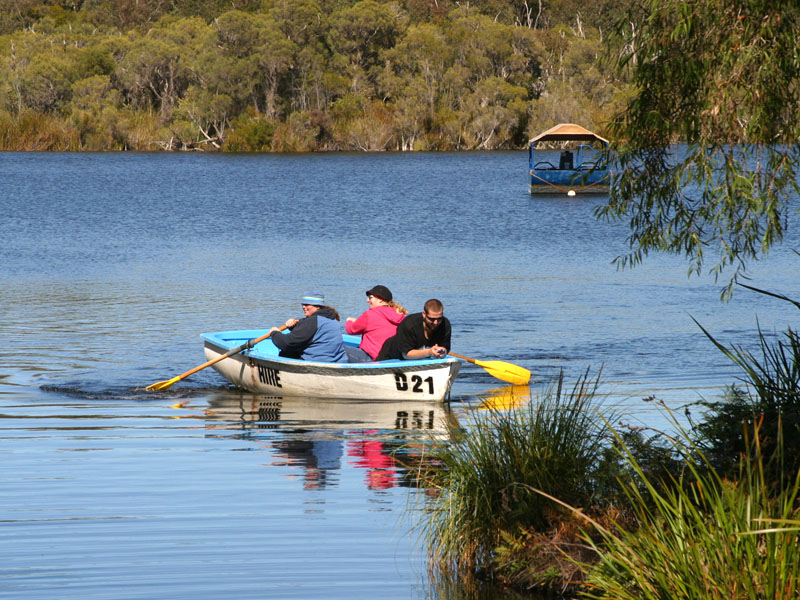 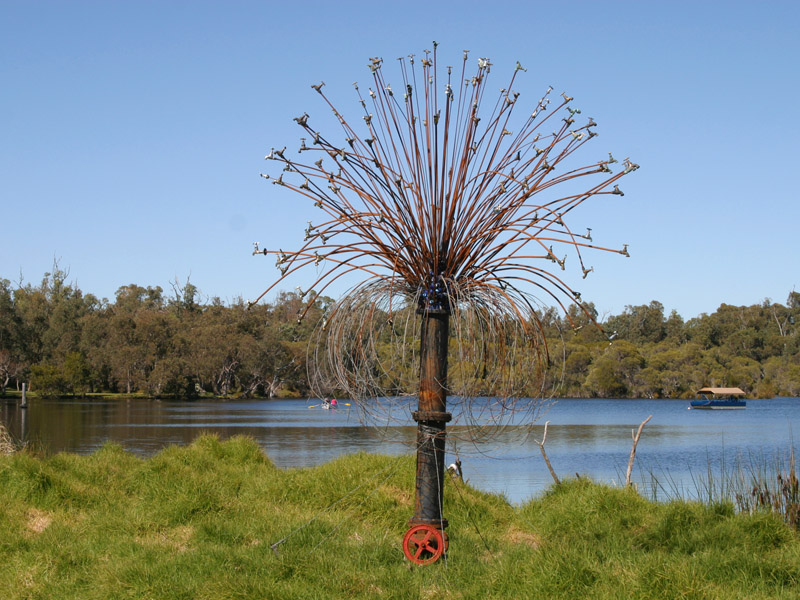 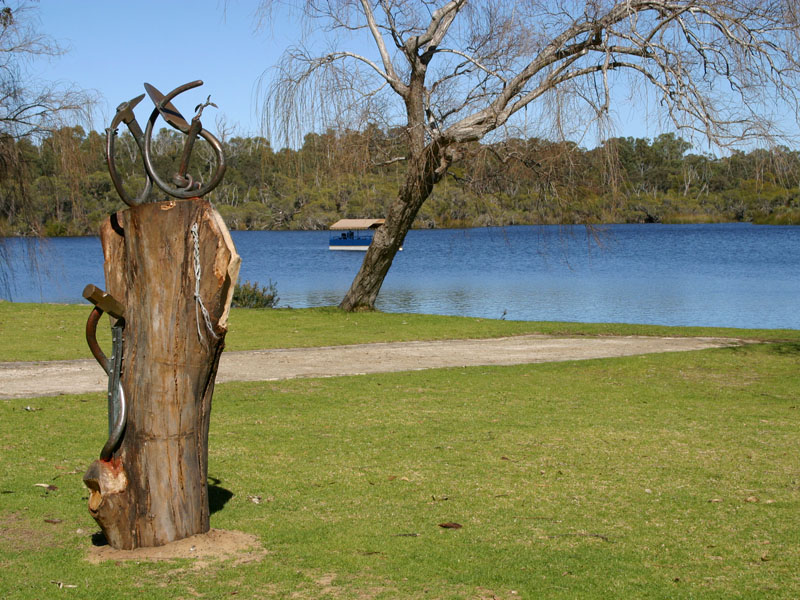 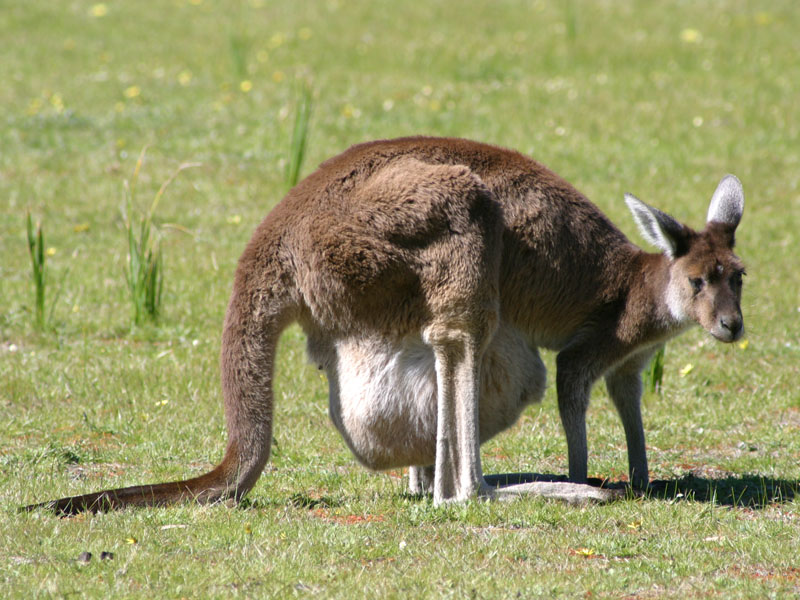 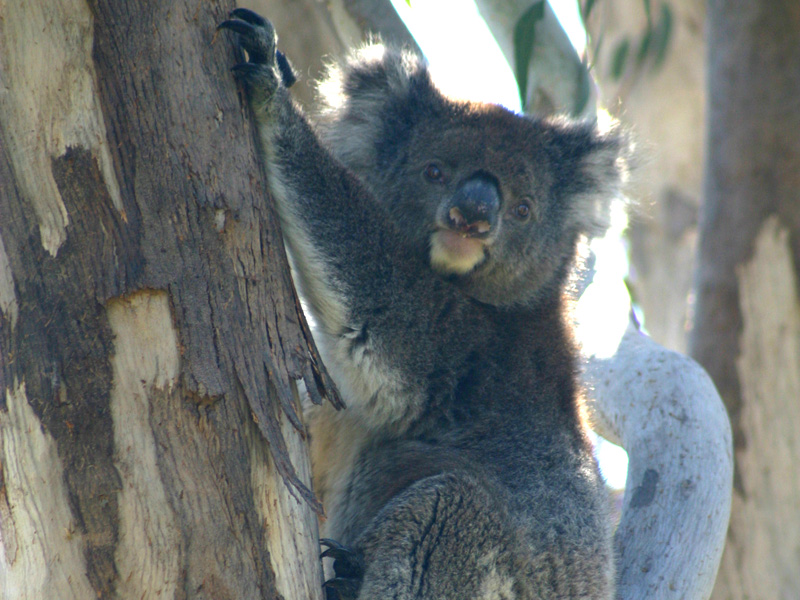 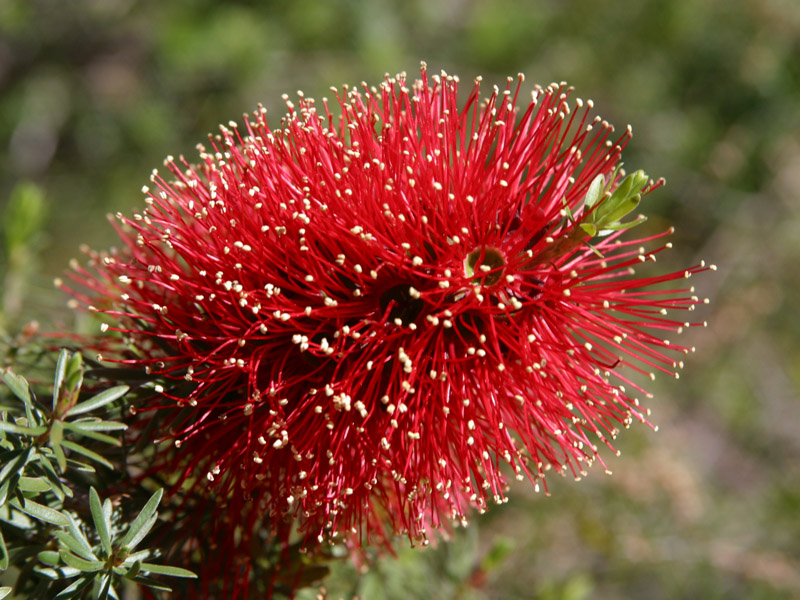 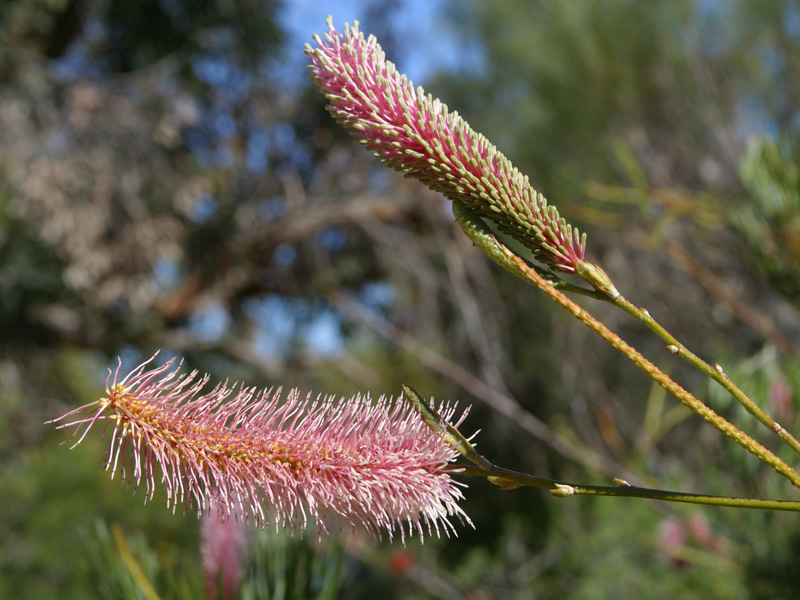 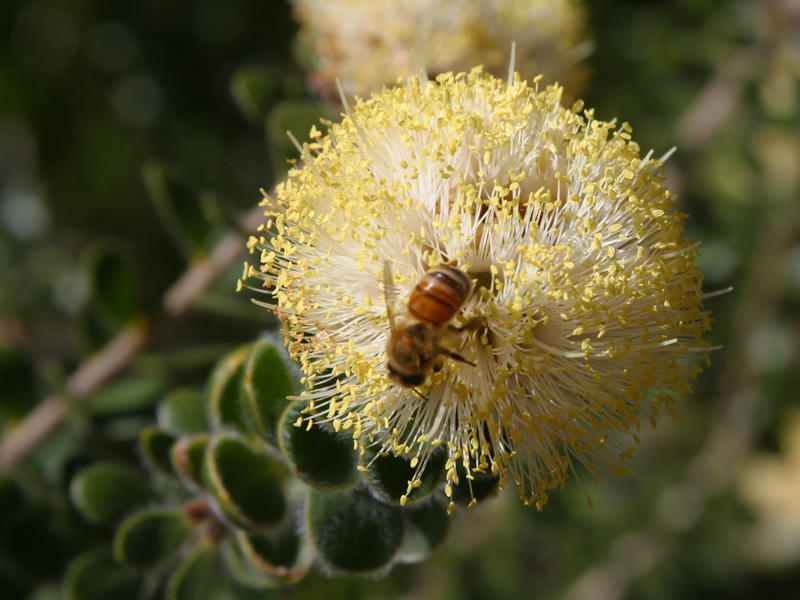