Boonah is known both as 'The Heart of the Fassifern' and, with a neat sense of overstatement, as 'Switzerland without the Snow'. The latter is an acknowledgement that it is a very pretty little town with lots of timber houses nestled in a valley surrounded by hills. The town is primarily a rural service centre for the surrounding farms which concentrate on producing vegetables for the Brisbane markets (carrots and potatoes) as well as cereal crops, beef, pork and timber. In recent times it has become an attractive 'weekend away' destination for Brisbane residents. It offers a number of excellent cafes and a diverse range of accommodation including cabins, cottages, lodges, retreats and romantic getaways.

Boonah is located 86 km south-west of Brisbane and 100 m above sea-level. It is 40 km due west of Beaudesert and 106 km west of the Gold Coast.

Boonah did not get its current name until 1937. Prior to that it was known simply as the Goolman Division Board and sometimes as Blumbergville. It is claimed that the word 'boonah' is a local Yugarapul word meaning "bloodwood tree" or "acacia".

Clydebuilt Statue
Located at the entrance to the town from Beaudesert, the Clydebuilt Statue is an impressive modern sculpture of a heavy horse. The plaque on the sculpture reads: "This statue stands as a tribute to the Clydesdale heavy horse and the role it played in the development of our Nation. Boonah Shire's Clydesdale heritage is unique and spans the period from the 1840s through to today. The heavy horse came with the squatters, was the settler's most valued assistance and the farmer's trusted and useful friend. When the Australian Clydesdale began to decline in the 1960s, a local family bred vigour back into the breed, promoted its value and presided over the rebirth of the Clydesdale in Queensland and beyond. 'Clydebuilt' stands as a testament to the efforts of Pat and Col Ehrich, and their families, who were instrumental in keeping the Clydesdale breed alive when the heavy horse almost disappeared from the Australian landscape. The Queensland National Trust has declared 'Clydebuilt' an icon to our National heritage."

Blumbergville Clock
The Blumbergville Clock, created by artist Christopher Trotter and made from recovered and donated farm equipment, is a distinctive timepiece which was installed in the Boonah town centre in 2014. "This sculptural time piece features pieces of equipment sourced from the district that have been re-imagined.  The interaction of objects with nature, man and time are of particular interest to the artist who also believes that the element of recycling in his work helps promote the concept of creative solutions to future generations." The clock was made as a monument to Boonah's recovery from the floods of 2011 and 2013. Christopher Trotter was helped in the unique construction by a local clockmaker, David Bland. For more information check out http://monumentaustralia.org.au/themes/culture/community/display/107474-blumbergville-clock.

With an Eye on the Sky sculpture
Located in the park next to the Blumbergville Clock, the "With an Eye on the Sky" sculpture by Catherine Anderson was commissioned by the local council to celebrate the Year of the Outback in 2002. The plaque notes: "This sculpture celebrates our association with the land we work and the heavens we rely on for life-giving sun and for rain ... Weather is the common theme running through and impacting on the day-to-day lives of anyone living in rural and regional Australia ... Country people live 'with an eye on the sky'."

Australian Hotel
Located at 32 High Street, this old timber hotel was established in 1888. It is reputedly a haunted hotel with the ghost being a friendly 23-year-old woman. Its cultural significance is noted as "The Australian Hotel provides evidence of the growth of Boonah as an important rural town from the late nineteenth century. The hotel is representative of a two storey timber hotel from the late Victorian period. It has aesthetic significance as it contributes to the collection of Federation and Victorian buildings in High Street and embodies the principle characteristics of a timber Victorian Queenslander hotel, albeit slightly modified. The place has social significance for its association with the development of the cultural and social life of Boonah." For more detailed information check out https://www.visitscenicrim.com.au/boonah-and-surrounds.

Commercial Hotel
Located at 39 High Street, the Commercial Hotel was designed by A. Hettrich of Brisbane and, at the time of opening in 1905, was considered the best hotel in Boonah. At the time it was lit by acetylene gas, had twelve bedrooms and a large veranda which ran around two sides of the building. The Scenic Rim Local Heritage Register records: "The main building has exposed framing, open verandahs at the upper level and a street verandah supported on decorated posts. The upper verandah has fine iron lace balustrading. The building relates to the popular Federation Filigree period 1890-c1915." Its cultural significance is described as "The Commercial Hotel provides evidence of the growth of Boonah as an important rural town from the late nineteenth century. It is a rare and intact example of a timber Queenslander hotel with wrought iron filigree detailing. The building has aesthetic significance for its contribution to the streetscape in the Boonah town centre and it embodies the key characteristics of a timber Queenslander hotel that was popular from the late nineteenth century. It also has social significance as a popular leisure venue in Boonah for over a century." For more detailed information check out https://www.visitscenicrim.com.au/boonah-and-surrounds.

Boonah War Memorial and Memorial Park
Located in Park Street, the Boonah War Memorial, which was built between 1920 and 1922, is listed in the Queensland Heritage Register. It was unveiled by the Prince of Wales (later King Edward VIII) and honours the 374 local men who served in World War I and the 69 local men who died. For more detailed information check out https://environment.ehp.qld.gov.au/heritage-register/detail/?id=600035.

Lookout
There is an excellent lookout which can be accessed from the roundabout at the entrance to the town. Take Mount Carmel Road which becomes Athol Terrace and on the Terrace is Bicentennial Place with excellent views across the town.

Templin Historical Village and Museum
Located at 397 Boonah Fassifern Road is the excellent Templin Historical Village and Museum. A typical Queensland folk museum it is spread over a large number of buildings and contains an interesting collection of artefacts and memorabilia which chronicle the history of the local area. It is open on Sundays from 9.30 am - 3.30 pm, tel: (07) 5463 1970.

Coochin Coochin Homestead
Located on the J Bell Road, this Queensland Heritage Listed home is a private residence which is not open to the public. However its story, and its connection with the Bell family, is fascinating. The guests at the home included Edward, the Prince of Wales, and Louis Mountbatten who stayed at the home in the 1920s. To read the story in much greater detail check out https://www.visitscenicrim.com.au/about-us/pioneering-families/the-bell-family.

Wyaralong Dam
Located  21 km east of Boonah via the Beaudesert Boonah Road, the Wyaralong Dam (also known as Lake Wyaralong) was completed in 2011. It lies east of Boonah on Teviot Brook, a tributary of the Logan River, covers an area of 12.3 square kilometres and is stocked with Australian bass and Mary River cod. The lake, which is open from early morning until sunset, has facilities for camping, canoeing, kayaking, rowing, sailing, fishing, bushwalking and electric powered boating. There is an excellent map and detailed information about camping, fishing and boating on the lake which can be downloaded at https://www.seqwater.com.au/dams/wyaralong.

The Falls Drive
There is an excellent 80 km drive south from Boonah which includes Browns Falls, Daggs Falls, Queen Mary Falls, and Teviot Falls as well as Carr's Lookout. It is a scenic drive through rural landscape to waterfalls, bush walks, lookouts and picnic areas. There is extensive information at https://southerndownsandgranitebelt.com.au/plan-your-trip/tourist-drives/the-falls-drive or collect a Queen Mary Falls Self Drive map from the Boonah Visitor Information Centre.

The highlights of the route are:
Browns Falls - which has a picnic area and a vigorous 600 m walk to the falls.
Daggs Falls - just a short distance on from Browns Falls along Spring Creek Road. The falls tumble 39 metres to the pool below.
Queen Mary Falls - located 60 km south on Spring Creek Road and part of Main Range National Park, the falls are 40 metres high. They are accessed by a 400 m walk which can be turned into a 2 km circuit. There is a downloadable map of the walks in the area at https://www.npsr.qld.gov.au/parks/main-range/pdf/main-range-map.pdf.
Carr's Lookout - located 8 km from Queen Mary Falls, this offers a superb view across Head Valley to Mount Superbus and the Scenic Rim.
Moss Gardens - a further 6 km to the Moss Gardens, a cool temperate rainforest with trees (hoop pine, kurrajong, and silky oak) and ferns covered in moss and lichens.

Mount French and Moogerah Peaks National Park
Mount French National Park is located 8 km to the west of Boonah. The climb to the top of Mount French is rewarded by excellent panoramic views over the Fassifern Valley. It is part of the 676 ha Moogerah Peaks National Park which includes a number of volcanic peaks and rocky cliffs to the west of the town. Mount Moon, Mount Edwards and Mount Greville are the more isolated areas of the park and are suitable for experienced bushwalkers. There are two short tracks near Mount French:
(1) North Cliff Track -  this is 720m return (15 minutes) and leads to Logan’s Lookout which provides panoramic views over the Fassifern Valley, with the Main Range escarpment to the west and Flinders Peak to the east.
(2) Mee-bor-rum Circuit - this is 840m return (25 minutes) is a circuit track through heathland to the East Cliff Lookout with views of Tamborine, Lamington and Mount Barney. For more information check out https://www.visitscenicrim.com.au/attractions/national-parks-and-reserves/mount-french.

Main Range National Park and Cunninghams Gap
Located 37 km west of Boonah on the Cunningham Highway, Cunninghams Gap lies in the Main Range National which covers 29,739 ha of rugged mountain peaks and widely diverse vegetation and rare wildlife. The European discovery of the gap was made by the explorer, Allan Cunningham, who identified it in 1827 while travelling the Darling Downs. He believed it would provide easy access from the Downs to Moreton Bay. Today the Gap offers a number of tracks which are ideal for bushwalking. It is possible to go on the Mount Mitchell Track to East Peak, on a Rainforest Circuit, on the Gap Creek Falls Track to Gap Creek Falls, on the Bare Rock Track to Morgans Walk and Bare Rock, on the Palm Grove Circuit and the Mount Cordeaux Track. There is detailed maps and information at https://www.npsr.qld.gov.au/parks/main-range.

* Prior to the arrival of Europeans the area was home to Yugarapul First Nations people.

* The town did not come into existence until 1882 when the Blumberg brothers opened a store. For a time it was known as Blumbergville. That year saw the opening of a Lutheran church.

* In 1883 a Methodist church was opened at Duganden.

* The railway reached the town in 1887 and the name was changed to Boonah. That year saw the consecration of the local Catholic church. It also saw serious floods in the district.

* In 1888 the Goolman Local Government Offices were moved to the town.

* The first agricultural show was held in 1898.

* The Fassifern Butter Factory opened in 1901.

* The first edition of the Fassifern Guardian was published in 1905.

* The local Teviot Picture Theatre was opened in 1941.

* A Catholic primary school was opened in 1957.

* A cultural centre was opened in 2003 - it included an art gallery and library.

* The town was seriously damaged by floods in 2011.

There is an excellent local website. Check out https://www.visitscenicrim.com.au/boonah-and-surrounds/. 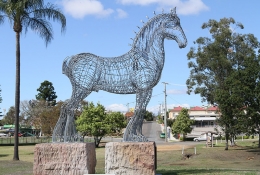 Clydebuilt … a statue to the heavy horses 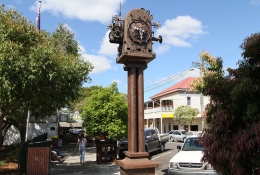 The Bumbergville Clock in the main street 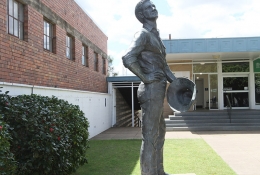 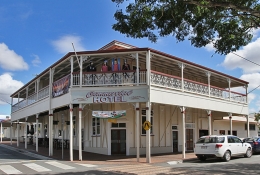 Commercial Hotel (1905) in the High Street 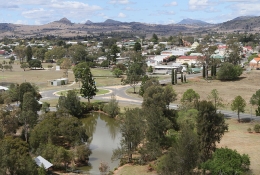 View across Boonah from Bicentennial Place 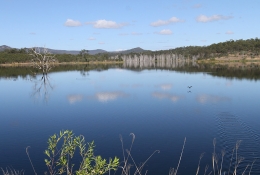 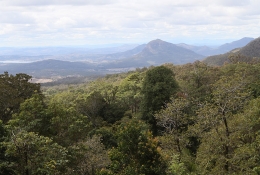 The view to the north from Cunningham’s Gap