I started photographing Australia for this project in 1988. The sequence has been relatively simple. In 1988 and 1989 I circumnavigated the country taking photographs of every town and place of interest. I was using a Canon AE-5 SLR.

In those bygone days I was using, in the first instance, Ektachrome 100 Professional film, but, given the fashion of the time, I quickly changed to Fuji Velvia. One amusing change is that I was fairly frugal with my shots. In this digital age when a photograph costs nothing it is common to shoot dozens and dozens of images. In those days, when the cost of film and processing meant every photo cost about $3.00-$4.00 I would often only shoot two or three images.

Looking back at the photos now I realize two things:

(a) there was an obsession in the late 1980s with getting the bluest skies possible and creating a slightly unreal image of Australia – check out the coffee table books from around that time and you’ll find that the rich saturated colours of Velvia were all the rage. They were almost mandatory.

(b) all the cars look so old. Initially I thought “Oh poor old country town. No one could afford a new car” until I realized that a car photographed in 1988 probably was a new car. They just looked old from the vantage point of 2013. I also realized that, 25 years down the track, they were actually historic photos and were worth putting up so that people could see how much things have changed.

In 1996 I joined the Sydney Morning Herald as a full time journalist and quickly fell into writing travel stories mostly about Australia. When I look at my images I realize that, for example, I went to Broome three times in one year and I have been to Alice Springs probably half a dozen times. I used to enjoy creating trips where I could write reviews of accommodation, stories about towns and, just for good measure, get a car from the team at the paper’s Drive section and test it on the roads I was travelling. So there are lots of photos from that era which have been integrated into the website. Where possible I have tried to date them. I called it quits with the Sydney Morning Herald in 2012.

Today I make short forays – rarely more than three or four days – to reshoot places I photographed years ago. I know from my photo collection that I have been to just about every town in Australia. There are a few I need to visit but all of them are small and out of the way.

As far as cameras were concerned, around 2002 I moved to a Canon Digital – if I remember correctly it was a D60, it cost about $5000 and it produced an image in JPEG format which was about 6MB.

More recently I have moved on to a Canon EOS 7D. I would guess that about 80% of the photos on this website have been taken with my much-loved 28-135mm, 3.5-5.6, Canon lens. I have other lenses but this is the one that I find I am using most of the time.  I know it is fashionable to shoot in RAW but, for my purposes which are basically this website, I am perfectly happy with JPEGs which I put through Photoshop in a very minor kind of way.

I see myself as a competent photographer. No more, no less. My aim is always to take “informational” images which will help people to find places and to assess whether a place is worth visiting.

If you see an image and you would like a good, high quality copy I can email it to you for a modest fee. Just contact me at belder@bigpond.com

Any queries, I am always happy to answer. 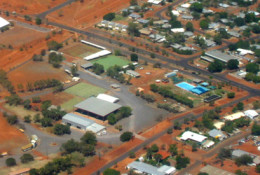 The Northern Territory has few significant townships. Only Alice Springs, Tennant Creek, Katherine and Darwin can be described as substantial towns and even then Tennant Creek has a stable population

Since 1988 Bruce Elder has travelled to every town in Australia asking the questions the website answers. He has written over ten travel books about Australia including the Globetrotter Guides to Australia, Sydney and Queensland; 1015 Things to See and Do in Australia; and Explore Queensland and Explore NSW. He worked as a full time travel writer with the Sydney Morning Herald and The Age from 1996-2012.

About this site | About the Photographs