In 1988, the year of the Bicentennial, I decided I wanted to create an Australian travel guide which went way beyond the usual ‘list of attractions’ approach which seemed to characterize the standard travel guides at the time.

Strangely my inspiration was a remarkable book – The Shell Guide to England – which not only told people what they should see in a particular town or village but explained why they should see it. It was all about history. It fitted historic places into a larger context and offered detailed explanations. It explained, for example, why people should go and visit Dorchester Abbey and how the church’s Jesse Window was the finest example of a Norman Jesse Window in the country. Check out http://en.wikipedia.org/wiki/Tree_of_Jesse if you want all the details. I had worked as a journalist in England and lived in Dorchester-on-Thames through the 1970s.

The task of collecting the information and writing up the entries to the towns was daunting. I would visit towns, find the local historical society or museum, and buy everything I could lay my hands on. In some instances I bought histories of towns that were mouldering in boxes in back rooms and in one case I was amused to purchase a local history which actually had more pages than the current population. Some were so old that in one instance I was told a local history cost 12 shillings and six pence ($1.25) – it had been written before decimal currency.

I employed a brilliant, meticulous and tireless researcher (he had won the University Medal in History at Sydney University) to help and I wrote and wrote and wrote. Of course this was not done without financial assistance. I managed to get sponsorship which covered the costs. I could go into the details but they are really not interesting, very traumatic and involve endless power plays and dubious decisions.

While this website piggybacks on the back of the original work, it is entirely different. Things change so much over twenty-five years that the original text is now invariably wrong – wonderful old pubs have burnt down, museums have been closed because local councils have refused to continue funding them, major attractions have closed through lack of interest, historic homes have been bought and closed to the public, some of those infamous ‘big things’ that are regarded as tourist attractions have closed down or been moved and, in many instances, money has been poured into local attractions and they are now genuine tourism magnets.

This time my aim has been simple: when a person arrives in a town they should ask themselves “Why am I here? What is worth seeing? What is memorable?” Each town entry attempts to answer those simple questions. And, always, I have attempted to explain what is important about the things that I regard as worth seeing. The end result is hopefully enjoyable and useful for everyone who uses the resources of the site. It is a labour of love. 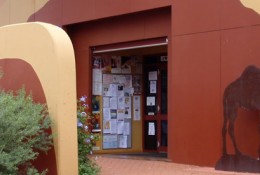 Laverton is a small settlement which has had a chequered career as a gold and nickel mining town. It once had the reputation as the wildest town in the west.

Since 1988 Bruce Elder has travelled to every town in Australia asking the questions the website answers. He has written over ten travel books about Australia including the Globetrotter Guides to Australia, Sydney and Queensland; 1015 Things to See and Do in Australia; and Explore Queensland and Explore NSW. He worked as a full time travel writer with the Sydney Morning Herald and The Age from 1996-2012.

About this site | About the Photographs