Historic town popular with Canberrans as a stopover or daytripper destination.

Bungendore is a small historic town with numerous specialty and gift shops as well as historic stone, brick and timber buildings. It is located in a beautiful valley in the Southern Tablelands near Lake George and has become popular with people from Canberra both as a stopover point on the road to the coast and as a day tripper destination with quality eateries, wineries and lots of opportunities for mooching and shopping.

Bungendore is located 275 km south-west of Sydney via the Hume Highway. It is 27 km north-east of Queanbeyan, 40 km from Canberra, 109 km from Batemans Bay and 701 m above sea-level.

Captain Richard Brooks established a stock station in the district in 1824 and named one of his outstations "Bungadow". When the village began around 1835 it was called Bungendore and this village was proclaimed in 1837.

Steam Train from Canberra to Bungendore
Intermittently a steam train, organised by the Canberra Railway Museum, runs from Canberra to Bungendore. As the website explains: "Travel behind a restored Diesel or Steam heritage locomotive, in historic end-platform carriages with comfortable seating and with light refreshments available on board. Your train will climb through the scenic Molonglo Gorge, pass through three tunnels and cross two major bridges before arriving at Bungendore. Enjoy 2 hours to browse the markets or shops in Bungendore." For more information and dates check out http://canberrarailwaymuseum.org/trips-tours.

An Historic Walk Around Bungendore
Bungendore has enough historic buildings of interest to make a short, three block walk around town not only worthwhile but genuinely historically interesting.
The walk should start at the western end of Malbon Street (the Kings Highway) and continue up the main street until Majara Street, then head north to Gibraltar Street, walk down Gibraltar Street and back via Molonglo Street to the corner where the walk started. Malbon Street is the main street and it is characterised by charming, historic houses. These buildings include:

The Carrington Inn
The Old Carrington Inn and The Wintergarden were built by William Daniel Winter as a coaching inn (1885-86) from 20,000 hand-made clay bricks. It was a Cobb & Co stopping point and later became a store and a private residence before taking its present form. Winter named the inn after Lord Carrington who had become the Governor of New South Wales in 1885.
The fittings including an early 19th-century mahogany bar from England, fabrics and antique furnishings are quite exquisite. The central courtyard, into which wagons and coaches would have driven, remains and is now part of the Wintergarden. Check out http://thecarringtoninn.com.au.

Bungendore Wood Works Gallery
Located at 22 Malbon Street, the National Tourism award-winning Bungendore Wood Works Gallery is situated in an exhibition centre which features fine examples of woodworking, ceramics, paintings and studio furniture. A particular highlight is the superb Hannah Cabinet - a reminder that true wood craftsmanship still exists in Australia. The gallery's construction used 16 tonnes of West Australian jarrah for the posts and beams, 10 tonnes of Tasmanian oak for the floors, ebonised Victorian ash for window and door frames and flooded gum panelling. The gallery specialises in exhibiting and promoting Australian-made wood craft from the country's most distinguished woodworkers and cabinet makers. For more information check out http://bungendorewoodworks.com.au.

Bungendore Village Square
The value of Canberra to modern-day Bungendore is probably best summed up by the "The Village Square", a collection of colonial-style shops around a leafy courtyard. They were completely refurbished in 2006 but some of the buildings - notably the cafe on the corner - date back to the 1870s when it was a butcher's shop. A petanque court has been built in the centre of the square.

Railway Station
Two blocks along from the Village Square is Majara Street. On the right hand side, across a bridge, is the single-storey railway station (1884-85). The town was a railhead, and thus an important centre, from 1885 until the line reached Queanbeyan in 1887. Although still part of the Sydney-Canberra line the station rooms were closed in 1987. The station and its buildings are described in great detail at http://www.environment.nsw.gov.au/heritageapp/ViewHeritageItemDetails.aspx?ID=4806258 with the significance of the buildings being explained as "Bungendore Railway Precinct comprises a state significant late nineteenth century railway station and partly intact yard, including the 1885 roadside station building, the 1885 goods shed and jib crane. The extant railway buildings and structures at Bungendore, particularly the station building and goods shed, are important elements within the wider townscape of Bungendore and are good representative examples of a series of similar items located on the Main Southern Line and the Bombala Line." The railway station is beautifully preserved, accessed across a bridge, and with its distinctive red bricks is a feature of the townscape.

Gibraltar Street
Continue past the railway station and on the corner of Majara and Gibraltar Streets is the primary school. The original building dates from 1879. An Anglican school was established on this site in 1862. Walking down Gibraltar Street the visitor passes the School of Arts building (1890), the post office (1882) which is still in use and adjacent to the police residence (1902) which occupies the block on the corner of Butmaroo Street. The renovated rear section of the police residence was originally the lock-up and operated as a police station until 1980. Next door is the attractive stone courthouse. Built in 1864 it is now the police station. On the other side of Butmaroo St is the Gothic Revival St Philip's Anglican Church (1864). The elms are over a hundred years old.

The Royal Hotel
Beyond Butmaroo Street, on the other side of the road, is the Royal Hotel which was built in 1882 in anticipation of the arrival of the railway. The back of this Hotel and has been refurbished and is now the Harvest Cafe.

Gunna Doo Bakery
This elegant building with its ironwork and impressive facade was built in the mid-1850s. It stands next to a cottage previously known as 'Duart' which was built prior to 1870 when it served as a store, Next door is a triple-front shop building which dates from the 1920s.

Strathmore
On the opposite side of Gibraltar Street is 'Strathmore', a High Victorian house built in 1890 with an impressive wide veranda with French doors and wrought-iron lacework. The house next door was built at the same time and was originally a residence and saddlery shop. The stables to the rear were used during World War I for the horses of the Australian Light Horse Bungendore Division.

Into Molonglo Street - the Oriental Bank
At the south-western corner of Gibraltar Street, on the corner of Molonglo Street, is a white, colonial-style building with a large front veranda. This building was erected in the 1870s by the Oriental Bank. The stables were for the bank manager's horses and the tiny cottage was built for the boy who tended the horses. This building was used in the filming of the 1969 movie Ned Kelly which starred Mick Jagger. It ceased to operate as a bank around 1970.

The Old Stone House
Located at 41 Molonglo Street is a handsome two-storey early Colonial style house dating from 1867. This building has been restored and is now the Old Stone House B&B. It has a beautiful cottage garden.

Capital Wind Farm
Established at a cost of $370 million and utilising 67 wind machines, the Capital Wind Farm was, for a time, the largest wind farm in New South Wales. It came into operation in 2010 and has a capacity of 140.7 MW. It has open days and people who are interested in getting close to the wind machines need to register. Check out http://www.infigenenergy.com/community/open-days/ for more information.

* In 1820 Dr Charles Throsby and his party became the first Europeans to reach the area.

* Captain Richard Brooks established a property at Turallo Creek in 1824.

* In 1824 the botanist and explorer Allan Cunningham recorded an outstation in the area called "Bungadow".

* The property 'Gidleigh', located south of the present townsite, was established in 1833 by the son of Governor King.

* Mail started arriving in 1836 when the town became part of the Queanbeyan coach route.

* The townsite was approved and Bungendore proclaimed in 1837.

* In 1838 a lock-up was built and The Harp Inn (now the Lake George Hotel) was established. At this time the settlement became an important crossroads connecting Goulburn, Braidwood, Queanbeyan and Cooma.

* In 1840 William Westwood, a convict, escaped from 'Gidleigh' and became a bushranger known as 'Jacky Jacky'. He robbed settlers around the district in 1840-41.

* In 1841 Westwood was captured and escaped custody several times (once being temporarily locked up in what is now the Lake George Hotel) before being captured and sentenced to Norfolk Island where he was hanged for murder in 1846.

* The first Anglican Church was built around c.1843.

*  The Bungendore Inn opened for business in 1847. It became a Cobb & Co staging post.

* The Bungendore courthouse was opened in 1864.

* The town remained a railhead until the line reached Queanbeyan in 1887.

* In 1894 gold was discovered nearby at Bywong.

* In 1901 Bungendore was suggested as the site of the future national capital.

* By 1909 one of the town's major industries was rabbit trapping with over 1.5 million rabbits being caught that year.

* In 1970 Bungendore was one of the settings for the film Ned Kelly.

* In 1976 vines were first planted at Affleck Vineyard

* A number of tourism-oriented businesses have sprung up in town in the 1970s and 1980s - these were fine art, antique and craft shops as well as coffee shops and restaurants.

* The award wining Bungendore Wood Works Gallery was opened in 1983.

* Being so close to the ACT the 1990s saw the increase in hobby farms in the district.

* In 2008 the Capital Wind Farm was established north of Bungendore.

Visit NSW has a useful entry - http://www.visitnsw.com/destinations/country-nsw/queanbeyan-area/bungendore and there is a local website http://www.bungendore.com.au with information about accommodation and eating. 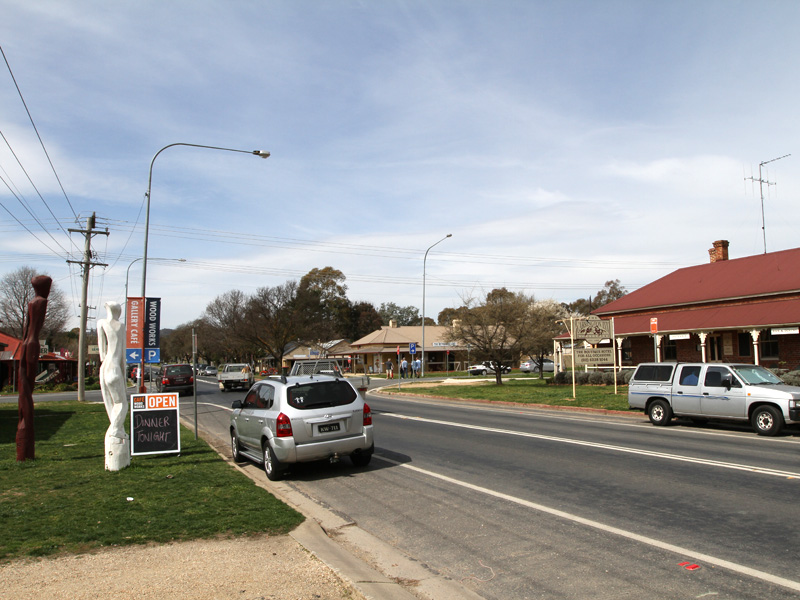 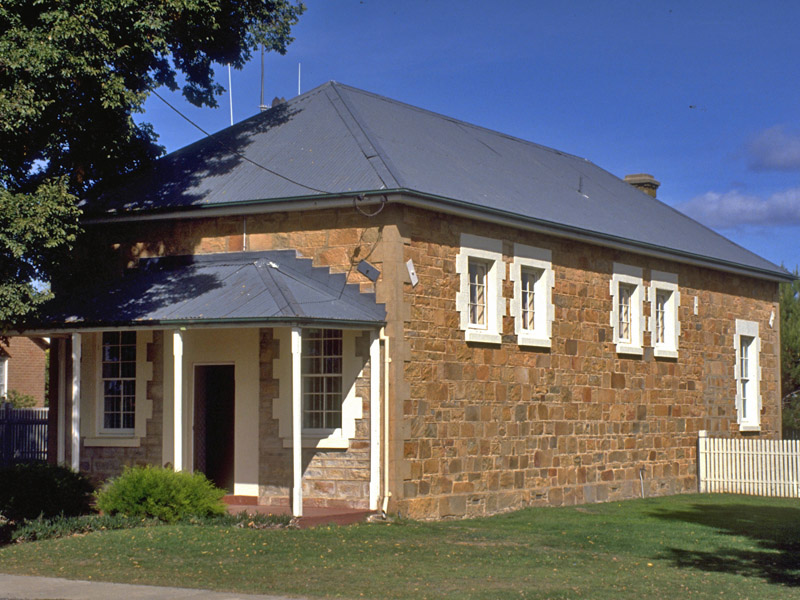 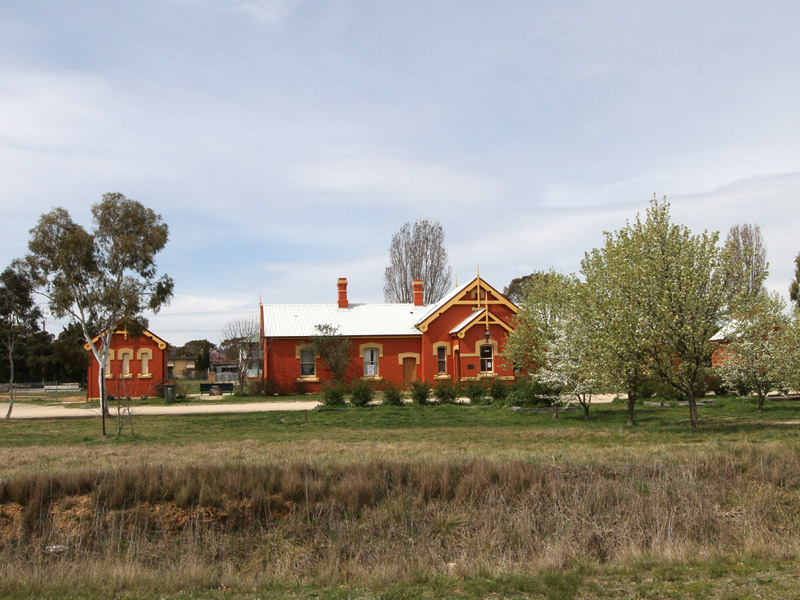 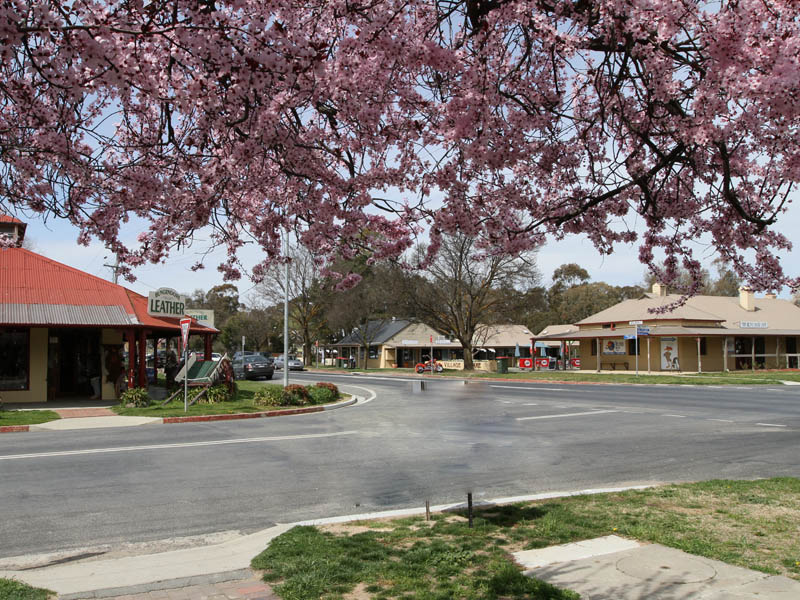