The highlands and mountains around Sydney contain three major cave systems: the Jenolan, Wombeyan and Abercrombie. Of all those caves the ones at Abercrombie are the most accessible being an easy drive south from Bathurst and a short drive down a hill to a beautiful large and flat picnic area. A visit to the Abercrombie Caves is a delightful way to spend a day in the Australian bush.

The Abercrombie Caves are 273 km west of Sydney via Bathurst and 71 km south of Bathurst. They are 316 km from Sydney via Goulburn and the Hume Highway. The latter, although longer, is actually faster.

Probably named after Abercrombie in Scotland although, remarkably, nobody seems to know. The guides at the caves explain that "there were a lot of Scottish settlers around Bathurst in the 1800's. The caves were originally referred to as 'Burrangylong Caverns'. Burrangylong is thought to be an Aboriginal word meaning something to do with the creek or wombats (The creek was known as Burrangylong Creek).

Coincidentally, the same year an article appeared in the NSW Magazine dated March 1843 written by H.G.Watson referred to the caves as "Grove Creek Caves". Mr. Watson's journey through the caves is still apparent because of his signed and dated signatures on the walls.  There are also references to the caves being called "The Bridge" on old maps. It seems as time passed these names were used interchangeably until around the goldrush in 1851 when Abercrombie Caves and Grove Creek became common usage. The creek at the caves flows into the Abercrombie River which is where the name has come from. The locality is also known as 'Abercrombie River'.

If you are interested in exploring caves the Abercrombie group have two advantages: (1) there is an excellent self-guided walk through the Archway Cave and (2) they are easily accessible. The road is sealed all the way and you don't descend forever into a valley the way you do at Jenolan and Yarrangobilly Caves. A bonus is that the Dance Floor in the Archway Cave offers a unique insight into the social life of miners during the goldrush era. Make sure you walk through the:

1. Archway Cave
There is an easy self-guided walk which travels from the main entrance along Grove Creek. At the southern end of the Archway the path heads up the hill and then descends into the Grove Creek valley where it enters the cave from the northern entrance. The cave is 221 metres long, 60 metres wide at both ends and 30 metres high in the middle. It is reputedly the largest natural limestone arch in the southern hemisphere.

As you approach the southern end of the cave you will notice on your left the famous Gold Digger's Stage. It is a large platform which was built by miners around 1854 and used for weekend dances and the occasional concert performance. The dances were usually accompanied by a bush band and plenty of alcohol. A number of old bottles have been found in the earth below the dance floor. The floor itself was built of Baltic pine and was probably a packing case for mining equipment or ship's ballast. The ironbark beams came from around Hill End and were brought to the caves by bullock team.

2. King Solomon's Temple
King Solomon's Temple runs off the Archway. It is a popular guided tour which passes through three major chambers and lasts an hour. A tour of the cave occurred as early as 1834. The cave's notable features include the Angel's Harp, the Dress Circle and the Temple Windows.

3. Bushrangers Cave
A guided tour of this cave lasts about one hour and passes through caverns with names like the Butcher's Shop, the Spare Bedroom, the Pulpit and the Hill Cave. This was the cave used briefly by the Ribbon Gang - hence the name.

4. Grove Cave
This is the smallest cave in the complex and the conducted tour only moves about  70 metres into the cave although in that short distance visitors see impressive shawl formations including a section named the Red Shawl Chamber.

Grove Creek Falls
On the road towards Tuena there is a dirt road leading to Grove Creek Falls which drop some 70 metres. This is the creek visitors have already walked around at Abercrombie Caves.

Tuena
Tuena is an interesting, near-ghost, gold mining town 20 km south which offers an insight into the miners who came to Abercrombie Caves on a Saturday night.

* It is known that the original inhabitants of the district were the Burra Burra people who were part of the Wiradjuri language group. They appear to have lived in the Abercrombie Caves. In 1977 a team of archaeologists found animal bones and stone tools north of the Great Arch.

* There is debate as to who was the first European to see the Arch Cave. In 1821 the Sydney Gazette reported that "a cave of considerable dimensions has been recently discovered in the neighbourhood of Bathurst". This was probably The Arch but there is no hard evidence. The report referred to Abercrombie Caves.

* In the early 1830s bushrangers known as 'The Ribbon Gang' were using the Arch (which locals called 'The Bridge') as a hideout. The gang was led by a former convict named Ralph Entwistle. Their reign was remarkably short-lived. They were in the area and using the caves from September to October, 1830. They were tracked to the caves, managed to escape, but were caught the following day. A bloody gun battle ensued in which two of the bushrangers were killed. Justice was quick. Ten members of the gang were hanged at Bathurst Gaol on 2 November 1830.

* By the mid-1830s the caves were well-known and locals were regularly visiting the main cave.

* In May 1843 the famous colonial artist, Conrad Martens, visited the caves and made a number of sketches.

* The discovery of gold in the area in the 1850s meant that large numbers of people passed through the area and many stopped to explore the caves. So popular were the caves that in 1860 miners from Mount Grey built a stage for dancing in the Arch Cave. It was upgraded in 1880 and is still in working order.

* The caves were an ideal hiding place for bushrangers and there is evidence that Ben Hall and his gang (which included Frank Gardiner and John O'Meally) used the caves regularly in the years between 1863 and 1865.

* By 1870 there were regular parties coming from Sydney to inspect the caves. By 1888 a temporary keeper was employed to protect and maintain the caves which were being vandalised. There is evidence that by 1895 more than 1,000 people a year were visiting the caves.

* Today the Caves are maintained by the NSW National Parks and Wildlife Service.

The Abercrombie Information Centre sells tickets to the cave tours as well as books, brochures and memorabilia.

http://abercrombiecaves.com is maintained by the Senior Guide at the Caves 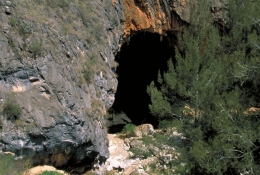 The Archway entrance at Abercrombie Caves 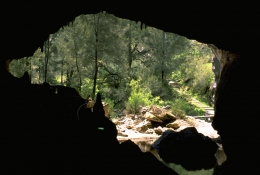 The path leading into the Archway from inside the cave. 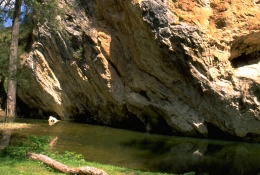 The path to the Archway passes along the banks of the Abercrombie River. 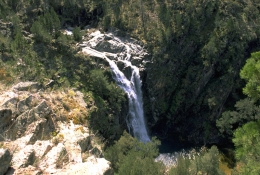