Historic town in the Snowy Mountains relocated when Lake Eucumbene was built.

Adaminaby is a unique town because it is effectively two separate places: one is called Old Adaminaby and the other is now known simply as Adaminaby although, back in 1956 when the town was moved to higher ground, it was known as New Adaminaby. Located 1021 metres above sea level, Adaminaby's uniqueness lies in its central importance to the Snowy Mountains Hydro Electricity Scheme. It was a town that was deemed dispensible and was duly drowned when the waters of Lake Eucumbene rose. Today the modern town is known as an important destination for keen anglers and the old town has remnants of its former life. It is particularly interesting during times of intense drought when the waters of the lake fall and the old town is revealed.

Adaminaby, which is 1021 metres above sea level, can be accessed via Canberra and Cooma (451km from Sydney) or via Gundagai and Tumut (539km). It is 51 km north-west of Cooma.

When settlers moved onto the Monaro Plain one of their properties was named 'the Adamindumee run', which was probably a version of a Ngarigo word meaning either 'a camping or resting place' or 'place of springs'. With the arrival of gold prospectors the tiny settlement was named Seymour but it never managed to usurp the Ngarigo word. The town was proclaimed Seymour on 25 March 1885 but local opinion, and the realisation that there was already a Seymour in Victoria, ensured that the original name survived. On 9 October, 1886 it was renamed Adaminaby.

The Heritage Trail Around New Adaminaby
It is necessary to remember that the Adaminaby you see today dates from 1956-1957 when, as the waters of Lake Eucumbene began to rise, most of the town's significant buildings were moved 9 km to the present site. Many of the newer buildings date from the early 1960s.
There is an Adaminaby Heritage Trail (see http://visitadaminaby.com.au/Adaminaby-Heritage-Trail.php) which starts at the Big Trout and, through a series of storyboards, tells the story of the town and visits Old Adaminaby and the Old Adaminaby Cemetery. The town walk takes about 40 minutes and the visit to Old Adaminaby is a 40 minute return drive.

Of particular interest are:
St John's Anglican Church - on Denison Street above the shopping centre which was originally built in 1906 and moved in 1956.
Uniting Church - previously the Presbyterian Church, which was built in 1886. It was moved to its current site in 1956.
Old Adaminaby Cemetery - Located 2 miles (3.2 km) south-east of the town so that it was far enough away to protect against infectious diseases and yet close enough for funerals to walk from the town. The Old Adaminaby Cemetery was created in 1863 and is a unique record of the early life of the town. There is a detailed history of many of the graves at http://visitadaminaby.com.au/Visitors-Guide-to-the-Old-Adaminaby-Cemetery.php. The cemetery is located 5 metres above the lake's high water mark.
The Snowy Scheme Museum - Open from 10.00 am - 2.00 pm on Saturdays and Sundays, the museum has a photographic collection and a number of bulldozers, shovels, trucks and a snow plough all of which were used on the Snowy Scheme, tel: (02) 6454 1643 and check out http://www.snowyschememuseum.com.au. The Museum explains on its website: "The Snowy Scheme has a story to tell like no other in Australian history. It was a project of its time, set on a grand scale, a perfect stage on which our post-war migrant workforce could perform. It allowed the development of massive irrigation systems feeding off the Murray and the Murrumbidgee, and generated clean renewable energy to the Eastern States. It gave migrants from a devastated Europe, some with families, a fresh start, albeit often in the most demanding of conditions, and even set new standards for occupational health and safety. It is our vision to capture as much as possible of the Snowy Scheme, the people, the towns, the huge machinery, the history and the enormity of the engineering feat, with all its environmental ramifications."

Lake Eucumbene
Lake Eucumbene, which is the largest of the storage and man-made lakes in the Snowy Mountains, was commenced in May, 1956 and completed in May, 1958. The dam wall, made of clay and rock is 116 metres high and 579 metres long. When full it holds 4,799,100 ML of water and has a shoreline of approximately 240 km. As it filled over 800 residents of Old Adaminaby and more than 100 houses and commercial buildings were moved to New Adaminaby. It is an amusing sidelight that Lake Eucumbene filled so slowly in 1978 the locals could hold a rooftop regatta over the remnants of their old houses. By 2007, during a decade long drought, the level of the dam fell so low that, 50 years after it had been drowned, the remnants of the old town could be seen again.

Fishing
Both Lake Eucumbene and the rivers and creeks in the area are stocked with brown trout and rainbow trout which can be caught weighing as much as 6 kg. This makes the area ideal for freshwater anglers who catch the fish by fly, spinner, trolling and bait fishing. Check out http://www.rainbowpines.com.au/1630/trout-fishing/ for more information. In November the town hosts the Snowy Mountains Trout Festival. For more information check out http://www.troutfestival.com.

Historic Buildings in Old Adaminaby
Located 9 km from new Adaminaby are the remains of Old Adaminaby or, more accurately, those buildings that have been saved because they were built above the town's high water mark.
In recent times people have built  fishermen's chalets and holiday houses on the foreshores and the area and Rainbow Pines Tourist Park has become a magnet for anglers and holiday makers.
Today there are only four original buildings left in the town - the Methodist Church, dating from around 1896, which is surrounded by pleasant picnic grounds and offers fine views across the lake; the Old Schoolhouse which is now used by Rainbow Pines Tourist Park as their office; and two other dwellings.

* Prior to European occupation the area around Adaminaby was occupied by members of the Ngarigo Aboriginal language group. During the summer months people from surrounding groups - notably the Wiradjuri to the west and the Yuin to the east - walked to the highlands to feast on the bogong moths.

* By the 1830s pastoralists had moved onto the Monaro Plains and were moving across to Adaminaby during the warm summer months.

* In 1848 John Cosgrove and Charles and Henry York applied for 16,640 acres which they called the Adamindumee run.

* The area changed dramatically in 1859 when gold was discovered at Kiandra. The following year discoveries were made along the Eucumbene River. Adaminaby grew as prospectors walked from Cooma to Kiandra. Adaminaby became a natural stopover point for prospectors en route to the goldfields.

* In 1860 the village was named Seymour but the locals did not like this name and so in 1861 it became known as Adaminaby which had been the name of the small settlement prior to 1860.

* In 1863 copper was discovered 3 km south of Adaminaby. It was not exploited until the twentieth century.

* By 1910 110 men and boys were employed in the local copper mine and the town was prospering.

* In 1949 the Snowy Mountains Scheme, the country's largest hydro-electricity scheme, began. Part of the plan was to build Lake Eucumbene which would drown the old town.

* Between 1956-57 the old town was moved 9 km to its present site to make way for the rising waters of Lake Eucumbene.

* In 1983 the town's race course was used for one of the scenes in the movie Phar Lap.

* During the long drought in the early years of the 21st century much of the old town was exposed as the level of water in Lake Eucumbene dropped.

* Today there are a number of buildings on the shores of Lake Eucumbene and the area is known as one of the finest fishing areas in Australia - a fact that has led to the Big Trout being an appropriate symbol of the town.

There is a useful local website - http://visitadaminaby.com.au - which has information about accommodation in the town and lots of advice about fishing in the area. 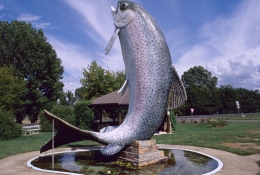 The Big Trout - a suitable icon for Adaminaby 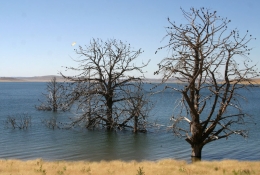 Lake Eucumbene with remnants of trees drowned by the waters. 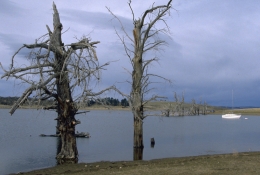 Lake Eucumbene is recognised as a superb fishing destination. 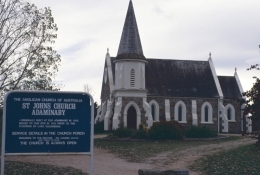 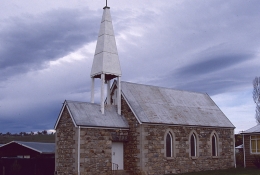 The Old Adaminaby Presbyterian Church (1886) was moved in 1956 and is now the Uniting Church.