The aim of this entry is to establish the appeal of the Adelaide Hills without precisely defining the region which lies only a few minutes to the east of Adelaide and is characterised by vineyards, charming villages, a sense of elegance and farms growing produce for the city. The Adelaide Hills are as much a state of mind as they are a geographical identity. They are the byword for South Australia's social elite. They are artistic. They are suffused with good taste. Climatically they are a collection of small towns and villages notable for being cooler in the hot summer months - and summer in Adelaide can be particularly oppressive. Consequently there is a sense of a British hill station about the area which tends to attract wealthy people from Adelaide who want quietness, seasonal change and lots of shady retreats. The novelist Barbara Hanrahan captured this European feel when she wrote of the hills that they "were more like England than any other place in the state. As well as tea-tree and wattle there were ivy bushes and oak-trees, hedges of sweet-brier and monthly roses ... Each mansion was surrounded by plants that would have died on the plains in summer. There were rhododendrons, camelias, even strawberries. In winter it was known for snow to fall." Geographically the Adelaide Hills extend from the foothills behind Adelaide Penfold's Magill Estate where the grapes that produce Grange wine are grown) and stretches from Williamstown in the north to Strathalbyn in the south. Most critically they include the major centres of Hahndorf, Mount Barker, Stirling, Crafers-Bridgewater, Aldgate, Lobethal,  Birdwood, Mylor, Summertown and Gumeracha. Each of those towns is covered under separate entries.

The Adelaide Hills lie to the east of Adelaide and start around 16 km from the CBD. It is rare for any city in the world to be able to offer a direction as simple as "follow Glen Osmond Road south east and you will soon be in the Adelaide Hills."

The name is self-evident. Adelaide was named after King William IV's wife Queen Adelaide (1792-1849) whose title before marriage was Princess Adelaide of Saxe-Meiningen.

Penfold Magill Estate
There was a time when the Penfold Magill Estate lay beyond the limits of Greater Adelaide. Today Magill is effectively a suburb of the city nestling under the Adelaide Hills, north of Mount Lofty and located only 15 minutes from the city centre. The Magill Estate's fame rests on Australia's most admired red wine - Grange Hermitage - now known as Penfolds Grange. The Magill Estate was founded by Dr Christopher Rawson Penfold in 1844 and formed the basis of what would eventually become the vast Penfolds wine company. When the company was taken over by Southcorp Holdings Ltd in 1996 much of the vineyard was sold so that today the vineyard at Magill is small, there is an excellent restaurant attached, the original Penfolds home is still located in amongst the vines, and there is a good range of wines available at the cellar door. Magill Estate is located at 78 Penfold Road, Magill. This winery specialises in both red and white table wines and fortified wines derived from cabernet, shiraz, riesling, semillon and chardonnay grapes. It is open seven days a week from 9.00 am - 6.00 pm for tastings and sales. For more details contact (08) 8301 5569 or check out https://www.penfolds.com/visit-penfolds/magill-estate-cellar-door?lang=. It is possible to book tours of the estate.

Mount Lofty Summit
As a perfect starting point, the Mount Lofty Summit is memorable. It is 710 m above sea level, has superb views across the city and is an easy way to recognise how close the "hills" are to the city. Mount Lofty offers panoramic views over Adelaide and across Gulf St Vincent. It was first sighted and named by Matthew Flinders in 1802. There is a downloadable brochure available with information about walks. Check out http://www.environment.sa.gov.au/parks/Find_a_Park/Browse_by_region/Adelaide_Hills/Mount_Lofty_Summit.

Mount Lofty Botanic Gardens
Located between Crafers and Piccadilly, the Mount Lofty Botanic Garden is 100 ha of native bushland which has been turned into a cool temperate garden with rich displays of rhododendrons, magnolias and carmellias which are best seen in spring although they are impressive all year round. There is a careful mixture of plants from South America, China, East Africa, New Zealand, South East Asia and North America as well as Australian natives.  The highlights are Fern Gully, the Woodland Garden and the Heritage Rose Garden which "is a special collection of the species roses from which all modern roses have been bred." There are special walking trails through the gardens with the Nature Trail (850m, steep gradient - 90 minutes) recreating what the Adelaide Hills would have been like before the arrival of Europeans. Check out http://www.environment.sa.gov.au/botanicgardens/Visit/Mount_Lofty_Botanic_Garden for more information.

Piccadilly
The Piccadilly Valley is the commercial heart of the Adelaide Hills. Historically it was the market gardening centre of the Adelaide Hills where the combination of a mild climate and excellent soils ensured a substantial supply of vegetables for the city. It grew everything from cabbages to tomatoes. In recent times the inevitable demand for premium South Australian wines has meant that much of the valley and hills has been given over to vineyards.

* Prior to occupation by Europeans the Adelaide Hills were home to the Peramangk Aboriginal people for at least 20,000 years

* The coastline was first explored in 1802 when Matthew Flinders, during his epic circumnavigation of Australia, sailed up the coast. He sighted Mount Lofty.

* In 1840 a Lutheran Church, made out of wattle and daub, was built at Hahndorf.

* Bridgewater, originally known as Cock's Creek, came into existence in 1840. In that year an inn was built where bullock teams forded Cock's Creek.

* In 1852 at Birdwood the famous Murray river-boat pioneer and adventurer, Captain William Randell built a mill.

* In 1864 Richard Dixon Hawkins, a licensed victualler and the son of a London publican, established a water pump and a trough for horses at the Aldgate Pump Hotel where the town now stands. Hawkins was hoping to capitalise on the increasing traffic across the Adelaide Hills to the Echunga goldmining area.

* In 1867 Cobb & Co started a regular coach service from Adelaide to Aldgate.

* The famous painter, Hans Heysen, settled in the Adelaide Hills in 1908.

* In 1969 Dr John Walmsley purchased the land that became the Warrawong Sanctuary at Mylor.

There is an official Adelaide Hills website. Check out http://www.adelaidehills.org.au for information about accommodation and eating in the area. 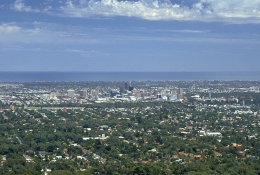 The view of Adelaide from the summit of Mount Lofty 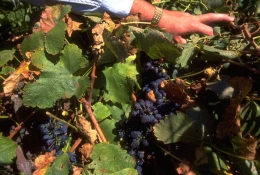 The ripe grapes ready to be harvested at Magill Estate to make a new vintage of Penfolds Grange. 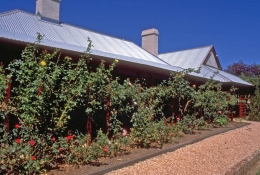 The original home of Dr Christopher Rawson Penfold at the Magill Estate. 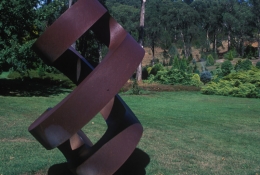 A piece of Greg Johns sculpture in the Mt Lofty Botanic Garden. 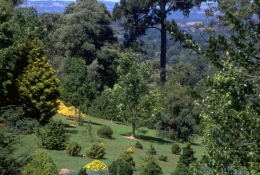 The view across the Mt Lofty Botanic Gardens 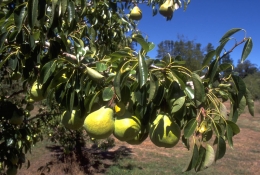 Pears ready to be picked south of Piccadilly. 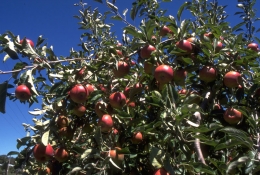 Apples ready for picking in an orchard near Piccadilly. 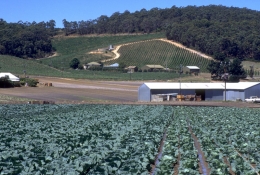 Cabbages and vineyards near Piccadilly in the Adelaide Hills.