Small service centre and historic township on the Stuart Highway.

Adelaide River refers to two different locations: the township and the river itself. The town, located on the Stuart Highway between Darwin and Katherine, is a small service centre noted for the Adelaide River War Cemetery which contains 432 servicemen and 63 civilians and is the only Australian war cemetery on Australian soil. The river, particularly on that section where the Arnhem Highway crosses it on the way to Kakadu National Park, is famed for its Jumping Crocodile Cruise where crocodiles leap out of the water tempted by pieces of raw meat.

The name Adelaide River refers to both a river and a town. The town lies on the Stuart Highway 113 km south of Darwin and 203 km north-west of Katherine. Adelaide River also refers to the river which flows into the Timor Sea approximately  45 km north-east (there is no road) of Darwin and is crossed by the Arnhem Highway 66 km south-east of Darwin.

The first Europeans to explore the Adelaide River were Lieutenant John Lort Stokes and Masters Mate L.R. Fitzmaurice in 1839 while surveying the coast of the Northern Territory on the HMS Beagle. They named the river after Queen Adelaide, then the Queen Dowager and widow of King William IV who had died in 1837.

Adelaide River Railway Heritage Precinct
The historic Adelaide River railway bridge was completed in 1888 and the line reached Pine Creek the following year. It is an important section of railway line and the Friends of the North Australian Railway have gone to great trouble to restore rolling stock and develop displays in the Railway Station which include old photos, the manual telephone exchange and memorabilia which recalls the days when the railway was the only access to the town. An historic marker records that the drawings for the bridge were completed in 1885, the bridge was completed in 1888, and "it played a significant role in the development of the Top End of the Northern Territory and had a strategic role during the Second World War." There is a very detailed discussion of the Precinct at http://www.enjoy-darwin.com/adelaide-river-railway.html#.

Adelaide River Cruises
For over 25 years Adelaide River Cruises have been offering cruises from near the bridge where the Arnhem Highway crosses the Adelaide River. The tours, which operate four times a day between May and November and carry only 30 people, have become famous for the "Jumping Crocodiles". The crew feed the crocodiles and the crocodiles, happy for a free feed, actually swim out to the boat. The crocs jump (they have been known to lift themselves right out of the water) for pieces of meat which are lowered on rods.
The Adelaide River at this point is a typical tidal river and crocodiles abound on its muddy shores. As well it is common to see buffalos, jabirus, sea eagles, kites, snakes and a variety of other wildlife during the tour. All the details of the cruise are available at http://www.adelaiderivercruises.com.au/tour/jumping-crocodile-cruise which has times, prices and bookings.

* Prior to the arrival of Europeans the area around the Adelaide River was inhabited by the members of the Kungarakany and Woolna Aboriginal language groups.

* The first Europeans to explore the Adelaide River were John Lort Stokes and L.R. Fitzmaurice in 1839 when the HMS Beagle was surveying the Northern Territory coastline.

* In 1862 John McDouall Stuart passed through the area on his journey from the Flinders Ranges to the coast of the Northern Territory. He explored the Adelaide River.

* The first Europeans to settle in the area were workers on the Overland Telegraph Line who arrived in 1871-1872.

* In 1871 Overland Telegraph workers discovered gold at Pine Creek and the town of Adelaide River grew rapidly as miners passed through it on their way to the goldfields.

* In 1873 the settlement got its first eating house when a man named Dougherty opened a rough bark and log place called the Jolly Waggoner. Around this time H. S. Finlay opened the settlement's first hotel which he called the QCE Hotel meaning 'Quiet, Comfort and Ease'.

* By 1879 a police camp had been established at the river crossing.

* By 1881 there were attempts to grow a variety of crops including coffee, rubber and sugar. This was short lived and had been abandoned by 1886.

* In 1886 a contract to build a railway between Palmerston (Darwin) and Pine Creek had been signed. It was planned to use 'coolie labour' with Indians doing the earthworks and Chinese laying the tracks.

* By April 1888 the railway had reached Adelaide River. The bridge and the railway station were completed in 1888-89.

* In 1911 Mount Bundy Station was established in the district.

* In 1936 work began on a road linking Adelaide River and Darwin.

* During World War II Adelaide River became an important military headquarters. It was used to grow fruit and vegetables for the troops and it became a weekend retreat for service personnel from Darwin.

* Adelaide River was bombed by the Japanese in August, 1942.

* In 1954 a serious attempt was made to grow rice at Humpty Doo. It was a disaster.

* By 1958 the train to Darwin was running once a week and stopping for only 10 minutes.

* On 11 January, 1962 Adelaide River was officially proclaimed a town.

* The railway closed down in 1976 and it wasn't until 1988, with the help of the National Trust, that the station building was reopened as a museum.

* In 2003 a third railway bridge was built and in 2004 the Adelaide-Darwin Railway began to pass through the town although it is not an official stop on the journey. 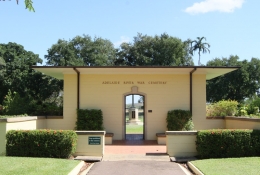 The entrance to the Adelaide River War Cemetery. 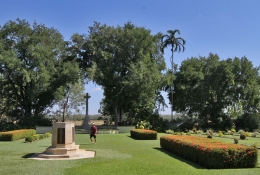 The beautifully kept gardens at the Adelaide River War Cemetery. 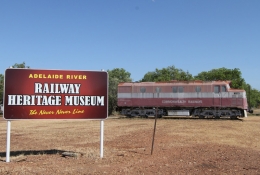 The entrance to the Adelaide River Heritage Museum. 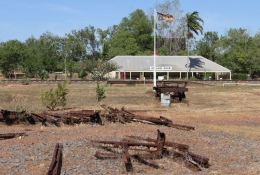 The Adelaide River railway station is part of the Railway Heritage Museum. 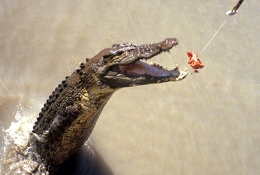 One of the Adelaide River's famed Jumping Crocs leaps for a tender morsel. 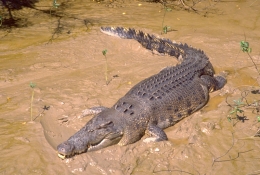 A croc asleep in the mud on the banks of the Adelaide River. 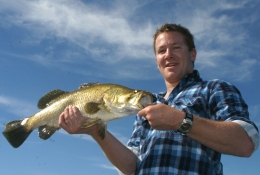 The rivers are rich with barramundi at the end of the wet season. 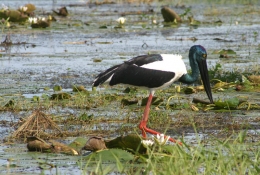 A jabiru picking its way through the waterlilies at the end of the wet season. 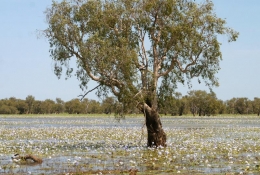 Near the mouth of the river the floodplains are covered with waterlilies. 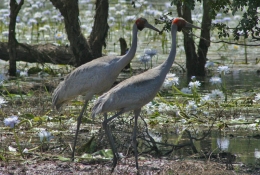